The evidence comes from a study of tiny marine animals living either side of the 2km thick Western Antarctic ice sheet.
Reseachers think their spread was due to the collapse of the ice sheet as recently as 125,000 years ago allowing water flow between different regions.
Their findings are published in the journal, Global Change Biology.

Bryozoans are tiny, filter feeding marine animals which in their adult form are immobile, living glued to the sides of boulders, rocks or other surfaces.

As part of the Census of Antarctic Marine Life scientists from the British Antarctic Survey have revealed striking similarities between the Bryozoans living in the Ross and Weddell seas.
These are 1,500 miles apart and separated by the Western Antarctic Ice Sheet (WAIS), the third largest ice mass on the planet. 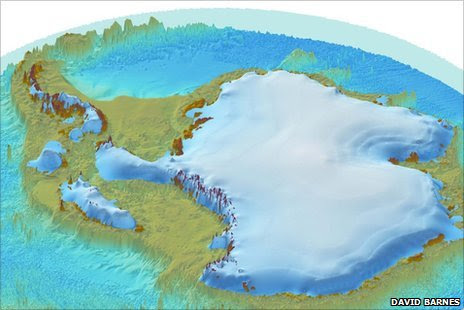 Antarctica once looked very different: a sea passage linked currently isolated areas
The finding led the scientists to conclude that these marine animals could only have spread across both seas if there had been a partial collapse of the WAIS opening up a trans Antarctic seaway. They believe this could have been as recently as 125,000 years ago.

It would only take a partial collapse to have a huge impact on sea levels raising them by as much as five metres globally.

While there is some geological evidence for the collapse of the WAIS at least once in the last million years, the data has been limited. Dr David Barnes, from the British Antarctic Survey is the lead author of the survey.

'Smoking Gun'
"There was no real smoking gun saying yes it's happened recently. This is the first time there's hard direct evidence that there has been a collapse," he told BBC News.

"For us that is a big deal. That would make the WAIS the least stable of the three ice masses and so that would mean that we could expect more sea level rise than we might have bargained for."

Because Bryozoans are abundant, fossilise easily and exist in many different, but highly localised forms, they are very useful for scientists trying to understand the connections between places.

"What we've got is this group of animals that don't disperse very well because the adults don't move at all and the larvae are short-lived and sink so they find it difficult to get around," said Dr Barnes.

"So you're left with this nice signal of where things used to be connected, and in this case it appears to be a connection between what is now an ice sheet."

He told the BBC he thinks the opening up of the seaway and the sea level rise that goes with it could have been relatively recent.

"It has to be recent because otherwise we would have lost the signal of connectivity... each ice age would have bulldozed out most of the animals living on the continental shelf. It's asking a lot to maintain a strong signal over multiple ice ages. "

The findings are a critical in understanding the future stability of the Western Antarctic Ice sheet and how ice sheets behave in different climate scenarios.
Scientists believe a future collapse of the WAIS would raise sea levels globally by 3.3m - 5m.