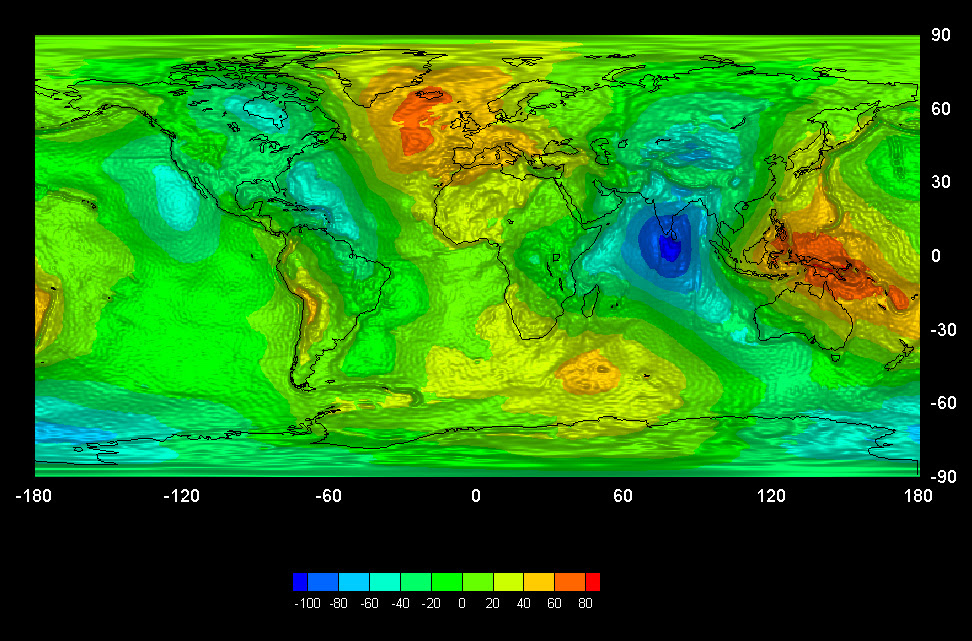 Scientists have unveiled the most detailed map yet of the Earth's gravity
at a European Space Agency conference in Bergen, Norway this week.
It shows the difference between the regular ellipsoid shape that is used to represent the Earth’s shape
and the geoid, a hypothetical surface of the Earth on which the surface is perpendicular to the gravitational pull.
The map is based on just two months' worth of data generated by ESA's GOCE satellite
and shows the tiny differences in gravity that exist around the Earth.
From Wired & PlanetEarth

A satellite launched by the European Space Agency has mapped the entire Earth's gravitation field in unprecedented detail.
The resulting map, which you can see above, shows where gravity is strong and where it's weak.
Blue indicates weak areas, green is average, and orange is stronger.

These deviations are a result of the fact that the earth isn't an exact sphere. Instead, it's a bumpy spheroid with some areas higher and some areas lower.
The measurements, which have been taken by Europe's GOCE satellite, have allowed scientists to precisely define the geoid -- exactly where a level gravitational surface is across the planet.

The satellite, which was launched in 2009, flies at an altitude of 254.9km -- the lowest orbit of any other research satellite.
As it flies so low, it's more subject to the pull of gravity -- which helps it to detect minuscule changes in the planet's gravitational field as it flies from pole to pole, but also means that it uses more fuel in its flight to keep it airborne.
Scanning the entire world took around two months.

The applications are numerous. Climate change researchers model ocean currents very carefully, and so will benefit greatly from knowing how gravity affects the huge masses of water in the oceans.
In fact, if there were no winds or currents, it's the shape that the ocean would take on the earth's surface, so comparing the geoid to the shape that the oceans actually take gives us some insight into what the other forces at work are.

Elsewhere, the information could be useful to geophysicists who want to know what's happening deep within the Earth, or engineers building a pipeline over a long distance and wanting to know what direction a fluid will naturally want to flow.

Prof. Reiner Rummel, the chairman of the GOCE mission advisory group, said: "The computed global gravity field looks very promising. We can already see that important new information will be obtained for large areas of South America, Africa, Himalaya, South-East Asia and Antarctica.
Over continents, and in particular in regions poorly mapped with terrestrial or airborne techniques, we can already conclude that GOCE is changing our understanding of the gravity field.

'The satellite is performing extremely well. In fact it's doing better than ESA expected,' says Dr Helen Snaith from the National Oceanography Centre in Southampton, who can't wait to get her hands on the data.

GOCE stands for Gravity field and Ocean Circulation Explorer and was the first of ESA's Earth Explorer missions to be launched. And as its name suggests, the satellite was designed to give scientists unprecedented information about the Earth's gravity field, which will tell them about ocean circulation patterns around the globe.

'It's doing so well that ESA has decided to scrap a planned hibernation phase and keep the satellite going until 2013,' says Snaith.

Its long operation means that by the end of the mission scientists may have an even more detailed map they expected.

'This map is based on just two months' data. As time goes on, it'll get revised and the resolution will just get better and better.' said Dr Helen Snaith, National Oceanography Centre
The satellite flies in the edge of the Earth's atmosphere and measures miniscule differences in gravity at many points around the Earth using three pairs of highly accurate gradiometers.

'These Earth Explorer missions are based on new concepts. Gradiometers are not quite a new concept, but it's an amazing bit of kit,' says Snaith.

If you turned this map into a globe, it would look like a partially blown-up football, where peaks represent strong gravity and the troughs show slightly weaker gravity.
If you placed a much smaller ball anywhere on this squashy football, it wouldn't move – even if it was on a slope – because gravity would be exactly the same all over it.

Although during school physics, you probably learnt that acceleration due to gravity at the Earth's surface is 9.8 meters per second squared, this is not strictly true. In fact, gravity differs very slightly all around the planet.
For example, because the Earth is the shape of a squashed ball, gravity is stronger at the poles than at the equator.

Before GOCE was launched, scientists knew that gravity is stronger around Greenland than around the Indian Ocean for example.
But the new map is telling them much more than they ever knew about the Himalayas, the Andes and Antarctica, all traditionally very difficult places to do research.

'The current geoid models are largely based on ground measurements, which of course is difficult in inaccessible parts of the planet,' adds Snaith.

This includes the oceans.
The geoid model that GOCE has generated is the shape the world's seas would be if there were no winds, tides or currents.
Scientists can then subtract the geoid from real measurements of sea surface height to work out how winds, tides and currents affect ocean circulation.
"Over major parts of the oceans, the situation is even clearer, as the marine gravity field at high spatial resolution is for the first time independently determined by an instrument of such quality."

'Until now, the best maps we had were on the 400 to 500 kilometre scale. GOCE's resolution is focussed down to 150 kilometres.
Most ocean current are around this width or smaller, so we're going to get a lot more detail about currents with this map,' explains Snaith.

'This map is based on just two months' data. As time goes on, it'll get revised and the resolution will just get better and better,' she adds.