Where the whale things are : new underwater microphones can track whales over thousands of miles 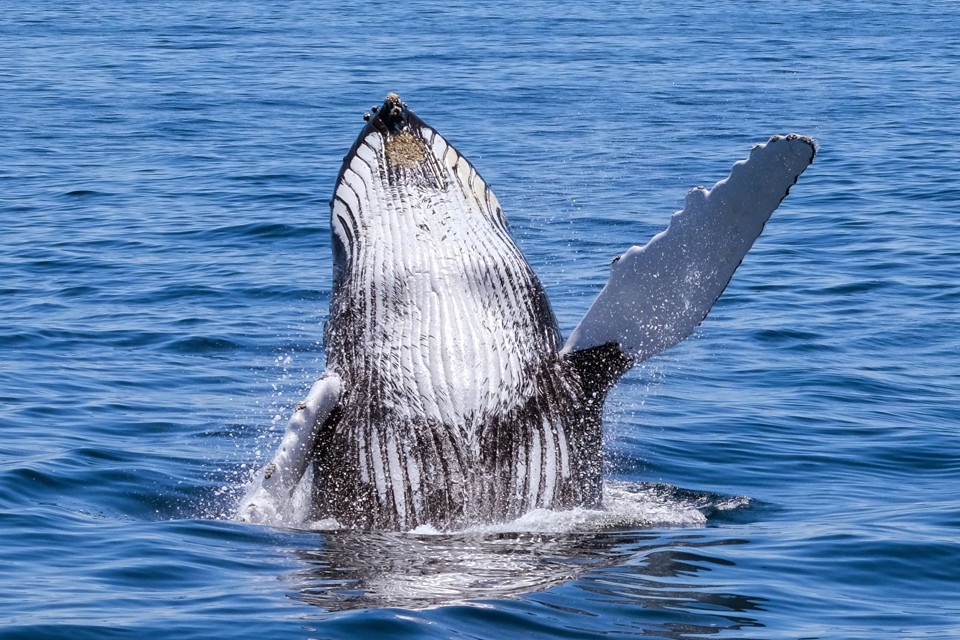 From TheAtlantic by Ed Yong

Whales, the biggest animals on the planet, are also among the hardest to find.
They spend most of their time submerged and unseen.
But not unheard: Whales are noisy animals that flood the oceans with songs, clicks, moans, and calls.
And Purnima Ratilal from Northeastern University has developed a way of listening in on these calls to instantly detect, find, and classify whales, over 100,000 square kilometers of ocean—an area the size of Virginia or Iceland.
“The conventional method for studying marine mammals is to go out on a boat, dangle a hydrophone [an underwater microphone] off the side, and listen for the sounds the animals make,” she says.
“Or you do visual surveys, focused on one or two species and just a handful of individuals at a time.”
By contrast, her technique uses 160 hydrophones to simultaneously map the presence of at least eight whale species, without ever needing to see a single fin.
Ratilal started her scientific career studying military sonar and found that fish would seriously clutter the rebounding signals.
That’s not great for people trying to detect enemy craft but it’s perfect if you want to, y’know, map fish.
Fishermen already use fish-finding sonar but it typically uses very high frequencies and can only map the water column directly beneath a boat.
By using lower frequencies, Ratilal could detect fish over thousands of square kilometers.
And a lot of fish, at that.

In September 2006, the team ventured out into the Gulf of Maine with two ships: one that sent out sound waves and another that detected the rebounding echoes with a string of 160 hydrophones. Together, they visualized the movements of a quarter of a billion herring.
During the day, these fish stick to the ocean floor and largely keep their distance.
But come sunset, they gather to spawn, rising to the surface and aggregating into a kilometers-wide mega-orgy—a shoal of 250 million fish all busy creating millions more baby fish.
While working on the herring, the team kept on hearing whales in their recordings.
They initially focused on humpbacks, reputedly among the most vocal of the whales.
“We were amazed at the quality of the data we got,” says Ratilal.
“We found 2,000 calls from humpbacks each day.”
But even though the herring were spawning throughout the gulf, the herring-eating humpbacks were clustered in two separate locations.
Why weren’t they going after the fish in the middle?
“We thought there might be other whale species occupying the regions in between. And sure enough, we found them.”

Each whale species calls within a certain frequency range and makes its own distinctive repertoire of sounds.
Using this information, the team could look at their recordings and extract the locations of five huge filter-feeding species (the blue, fin, humpback, sei, and minke) and three toothed ones (sperm, pilot, and killer).
The whales seemed to divide the herring between them, with each species sticking to its own particular part of the Gulf.
The blue whales stayed away from the humpbacks, which swam apart from the minkes, which lived separately from the seis.
“You find the same species in these same areas day after day,” says Ratilal. “It’s quite stable.”
It’s possible that the larger whales like blues stay away from shallower regions, leaving those to the smaller minkes and pilots.
But in truth, no one knows why or how the whales carve up the oceans between them.
It’s not surprising that they do—you can see similar partitioning among, say, plant-eaters on the African grasslands—but it’s rare to see such stark visual evidence of these divisions.

Check out Ratilal’s map: that’s a huge body of water.
See those rings of color?
Those are the territories of animals that are the size of ships. 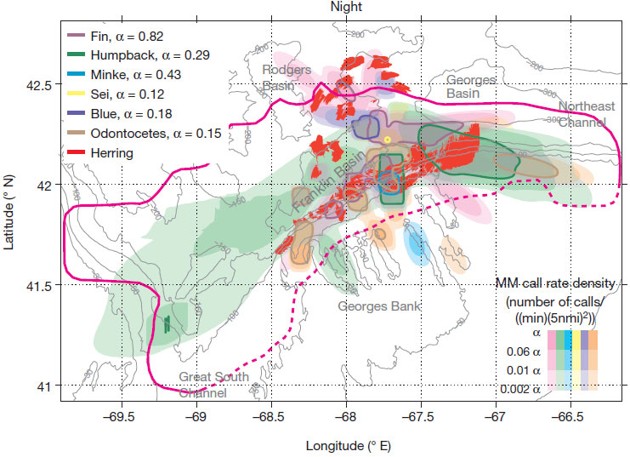 
“[Ours] is the only technique that can instantaneously monitor marine mammal and fish populations over very large areas,” she says.
She calls her technique Passive Ocean Acoustic Waveguide Remote Sensing (POAWRS), and the “Passive” bit is important.
When the team studied the herring, they found the fish by sending out sound waves and capturing the echoes.
But whales are so vocal that the first bit is unnecessary.
“We’re just listening in,” says Ratilal.
She thinks that POAWRS can reveal not just the distributions of whales and fish, but their interactions as predators and prey.
For example, she says that humpbacks are ten times more vocal at night than during the day, and suggests that they’re making feeding calls while engulfing the amassed herring.
Likewise, minke whales make buzzing sequences that have previously been interpreted as mating calls. But the team found that they overlap with the presence of herring.
“They’re probably an intricate part of the minke feeding behavior,” says Ratilal.
But Jeremy Goldbogen from Stanford University isn’t convinced.
He says that these large, filter-feeding whales might make calls between bursts of foraging, but tagging studies have shown that they don’t vocalize while feeding.
“This demonstrates both the power and limitations of using acoustics to study predator-prey interactions,” he says.
Sure, researchers can monitor large swathes of ocean and find patterns that no one has seen before. But they can only infer behavior through correlations, and they may do so wrongly.
When understanding what these animals are doing, rather than just working out where they are, you still need to see them.

Links:
Posted by geogarage at 1:06 AM