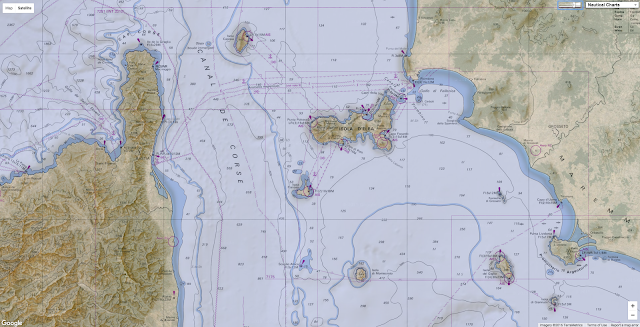 From LiveScience by Elizabeth Newbern

When an astronaut aboard the International Space Station trained a camera on a picturesque view of the northern Mediterranean Sea, the space flyer instead captured a unique effect created by the reflection of the moon on the surface of the water.
The astronaut's "moon glint" photo shows the twinkling lights of coastal Italian towns and islands of the northern Mediterranean obscured by what looks like dark brushstrokes reminiscent of sweeping clouds.
Sunlight can reflect off the surface of water or snow, and when the light hits at a certain angle, it creates a glare on the material's surface.
This glare is something that scientists call "sun glint," and it happens according to a mathematical concept called the bidirectional reflectance distribution function (BRDF), according to NASA's Goddard Space Flight Center in Greenbelt, Maryland.

It turns out that moonlight can do the same thing.
When light from the moon reflects off the surface of a large body of water or ice at particular angles, it also creates a glare (or glint) of light, according to a blog post from the Cooperative Institute for Research in the Atmosphere (CIRA) at Colorado State University.

When moonlight reflects from the sea, as it has done in this image, it can reveal complex patterns on the sea surface, NASA said.
These patterns typically come from a combination of different natural processes and traces left behind by human activities, the agency said.

In this image, for example, it is possible to see wave patterns trailing behind passing ships in a characteristic V-shaped pattern north of the island of Elba, NASA said.
A meandering line coming off Montecristo island is an "island wake," which results from alternating masses of whirling air that develop on the downwind side of the island.
Dark areas of the sea surface — indicating rougher water, in this case — can sometimes make islands, such as Montecristo and Pianosa, harder to see, NASA said.
In contrast, areas protected from wind and turbulence usually appear brighter because their smoother surfaces act as a better mirror for moonlight, the agency explained.
The sea surface also displays numerous tight swirls known as gyres, which show large water-circulation patterns in the sea, NASA said.
The astronaut's image is made all the more compelling by the sprinkling of lights from nearby cities, such as Piombino and Punta Alta.
The cities' golden glow turns this already otherworldly picture of Earth's Mediterranean Sea at night into something truly magical.