Echo Voyager, Boeing’s latest unmanned undersea vehicle (UUV), can operate autonomously for months at a time thanks to a hybrid rechargeable power system and modular payload bay.
The 51-foot-long vehicle is the latest innovation in Boeing’s UUV family, joining the 32-foot Echo Seeker and the 18-foot Echo Ranger.

Boeing introduced Echo Voyager, its latest unmanned, undersea vehicle (UUV), which can operate autonomously for months at a time thanks to a hybrid rechargeable power system and modular payload bay.

The 51-foot-long vehicle is not only autonomous while underway, but it can also be launched and recovered without the support ships that normally assist UUVs.
Echo Voyager is the latest innovation in Boeing’s UUV family, joining the 32-foot Echo Seeker and the 18-foot Echo Ranger.
“Echo Voyager is a new approach to how unmanned undersea vehicles will operate and be used in the future,” said Darryl Davis, president, Boeing Phantom Works.
“Our investments in innovative technologies such as autonomous systems are helping our customers affordably meet mission requirements now and in the years to come.” 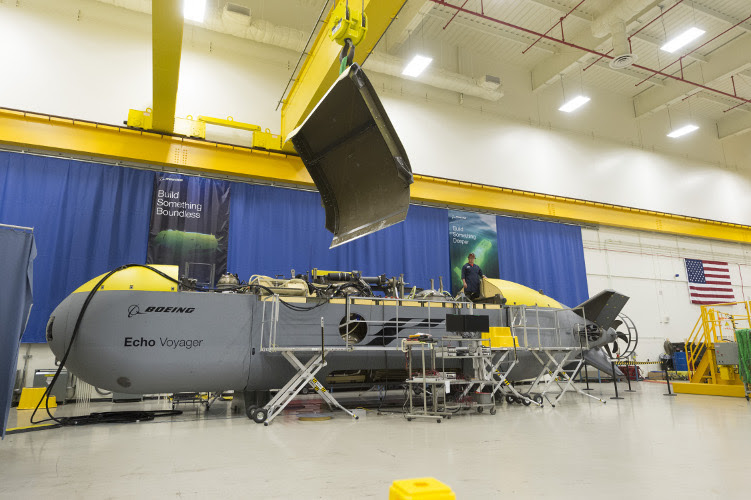 Echo Voyager is the newest member to join Boeing’s unmanned undersea vehicle family.
The 51-foot vehicle is designed to stay underwater for months at a time.

Echo Voyager will begin sea trials off the California coast later this summer.
Boeing has designed and operated manned and unmanned deep sea systems since the 1960s.
“Echo Voyager can collect data while at sea, rise to the surface, and provide information back to users in a near real-time environment,” said Lance Towers, director, Sea & Land, Boeing Phantom Works. “Existing UUVs require a surface ship and crew for day-to-day operations. Echo Voyager eliminates that need and associated costs.”

In 2016 Boeing celebrates 100 years of pioneering aviation accomplishments and launches its second century as an innovative, customer-focused aerospace technology and capabilities provider, community partner and preferred employer.
Through its Defense, Space & Security unit, Boeing is a global leader in this marketplace and is the world's largest and most versatile manufacturer of military aircraft.
Headquartered in St. Louis, Defense, Space & Security is a $30 billion business with about 50,000 employees worldwide