Mobula rays leap spectacularly from the sea when they gather in large groups, but scientists still don’t know why they do it

Soaring high above the waves as easily as a bird, mobula rays appear perfectly designed for this astonishing aerobatic display.
Closely related to sharks but with long, flat bodies and wing-like pectoral fins, they are ideally suited to swooping through the water yet seem equally at home in the air, so much so that they have earned the name “flying rays”.
Mobula rays can reach heights of more than two metres (6ft 6ins), remaining airborne for several seconds, but their landings are much less graceful, creating a loud bang as they belly-flop back into the sea.

This behaviour - filmed in the Gulf of California, Mexico, as part of a new BBC / Discovery coproduction television series - can last for 24 hours and happens as many hundreds of rays shoal together to form huge aggregations.
“Sitting in a boat in the midst of these aggregations is akin to sitting in a pot of popcorn as the kernels explode into the air. Everywhere you look mobulas are leaping out of the water and landing with a loud smack, sometimes just a couple of meters from you,” says Joshua Stewart, from the Gulf of California Marine Program, who studies rays in Mexico and across the world.
“The mobulas launch themselves straight up out of the water at top speed, and most often they land flat on their belly. However, sometimes they seem to lose control and do flips and twists before reconnecting with the water.” 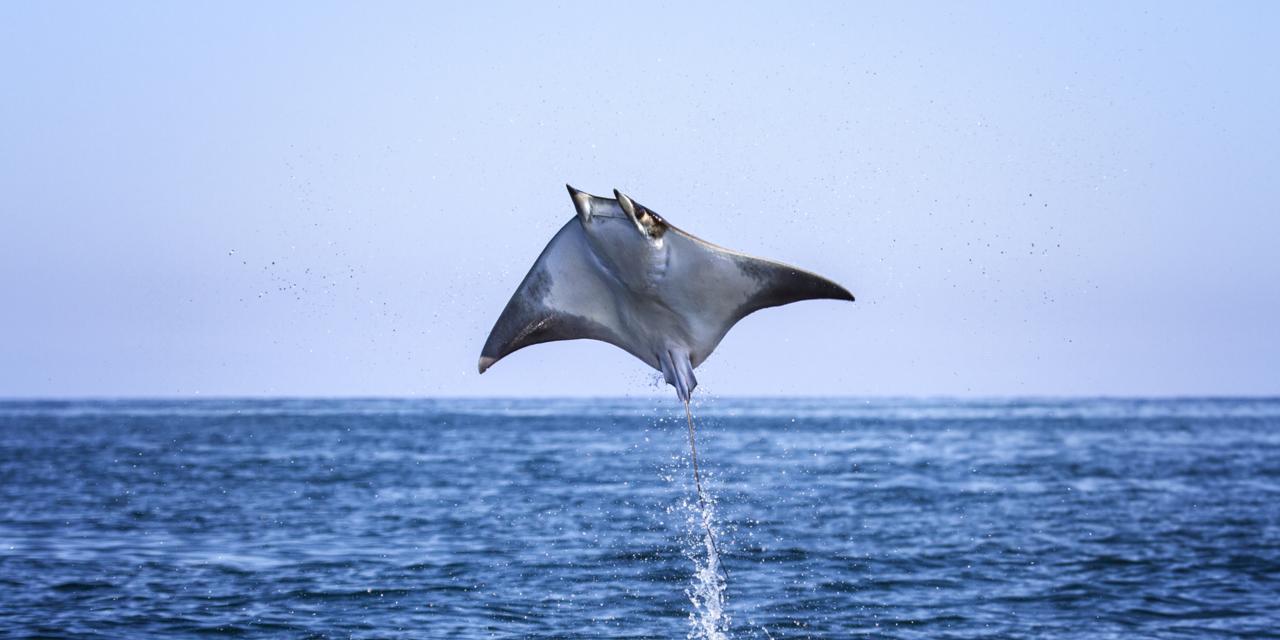 Mobula rays’ elusive nature and skittish behaviour in front of divers has made them difficult to observe in the wild, except when they breach the water.
Mr Stewart explains that even large aggregations, like the one in the Gulf of California, can sometimes be hard to find, as they can occur in different locations and at slightly different times of the year.
In order to shed some light on these animals Mr Stewart applies some of his findings from his research into the larger manta rays he completed with the Manta Trust.
For example, he knows that manta rays have to start their leaps fairly deeply, in order to build up enough speed to leave the water.
“As far as we can tell, all mobulid rays jump, as do their myliobatid (eagle rays) cousins. Many theories have been suggested [as to why they jump], from feeding, courting, communicating, and ridding themselves of parasites,” he says.

“While the jumping behaviour may occur during feeding or courting events, we believe that the most likely purpose of the jumping behavior is communication, which could have a variety of applications in different behavioral scenarios. However it is very likely that mantas, mobulas and eagle rays jump for a variety of reasons.”
Having viewed the footage of Mobula munkiana in the Gulf of California, Mr Stewart was able to confirm that both females and males jump.
His team has also uncovered what is thought to be a M. munkiana nursery ground, where juveniles were feeding along the shore, close to where the aggregations and jumping typically happen.

“There’s some evidence to suggest that females mate immediately after giving birth,” says Stewart.
“This is pure speculation, but it's possible that the females could give birth in the nursery habitat and then mate shortly thereafter in the same area.”
In the Maldives reef mantas (Manta alfredi) have been observed jumping at the beginning of a feeding frenzy.
“We believe that they're jumping to inform other mantas in the area that food is available, and using the jumping as a sort of signal to aggregate,” Mr Stewart says.

“Along these lines, we're thinking that the M. munkiana may be jumping to identify the aggregation to other nearby individuals. In theory, this would increase the density and overall number of individuals, providing a higher mate choice ability and increasing the likelihood that any one individual gets to mate.”
What is known about mobula rays is that they reach sexual maturity late and their investment in their offspring is more akin to mammals than other fishes, usually producing just a single pup after long pregnancies, all of which makes them extremely vulnerable to commercial fishing.
As a species that likes to come together, they are an easy target for fishermen and many rays can be caught in a single attempt.
Fishing spawning aggregations of other species is known to cause numbers to plummet.

“Because of this, we know that the mobula aggregations in the Gulf of California are extremely vulnerable to human impacts, and the greatest threat is most likely bycatch in drift gill net fisheries,” says Mr Stewart.
“Huge numbers of these animals are moving through relatively constricted geographic areas and just a few large catches could have dramatic negative impacts on their populations.”
Mr Stewart is now planning research to confirm the reasons behind the aggregating behaviour in the Gulf of California and how many of the population is represented, as well as further work on seasonal locations and habitat use.