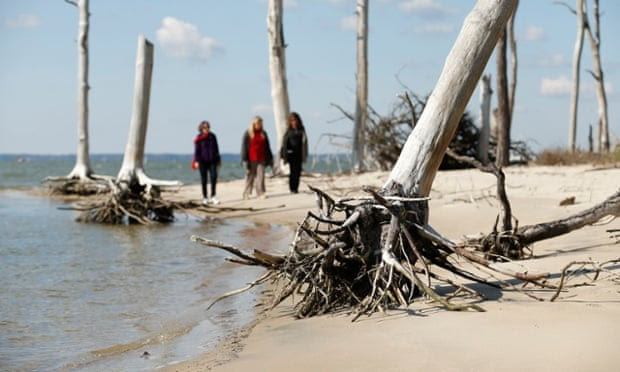 Bare trunks of trees, believed to be of a forest claimed by rising sea levels,
exposed on Assateague Island in Virginia, US.
Photograph: Kevin Lamarque/Reuters

From The Guardian by Karl Mathiesen 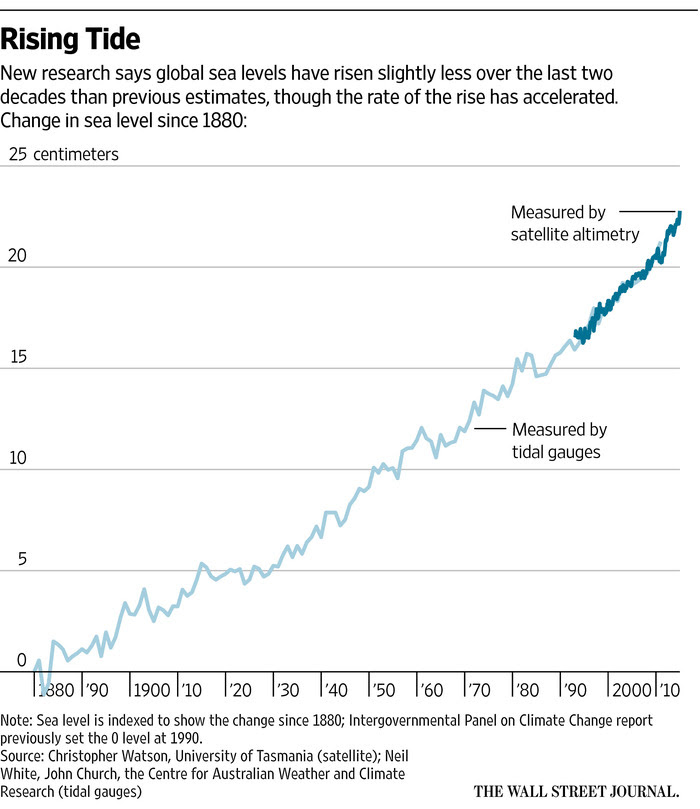 Sea level rise sped up over the last two decades rather than slowing down as previously thought, according to new research.
Records from tide gauges and satellites have shown sea level rise slowing slightly over the past 20 years.
But as the ice sheets of West Antarctica and Greenland shed ever more water into the ocean, climate models show it should be doing the opposite.
“The thing that was really puzzling us was that the last decade of sea level rise was marginally slower, ever so subtly slower, than the decade before it,” said Dr Christopher Watson from the University of Tasmania who led the new study. 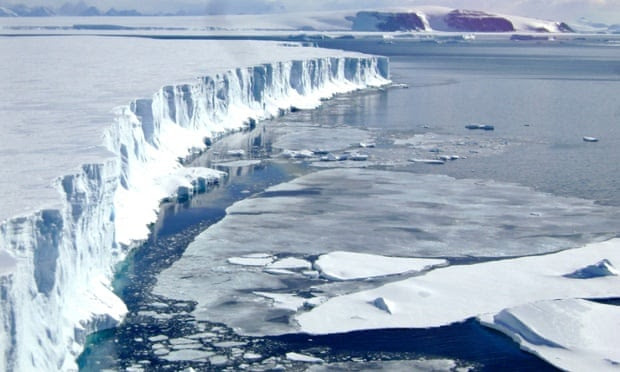 he leading edge of the remaining part of the Larsen B ice shelf.
A separate ice shelf, Larsen C, is thinning from above and below, scientists found.
Photograph: HO/Reuters

Watson’s team found that the record of sea level rise during the early 1990s was too high.
The error gave the illusion of the rate of sea level rise decreasing by 0.058 mm/year 2 between 1993 and 2014 , when in reality it accelerated by between 0.041 and 0.058 mm/year 2 .
This brings the records into line with the modelling of the UN’s climate science body, the Intergovernmental Panel on Climate Change (IPCC).
“We see acceleration, and what I find striking about that is the fact that it’s consistent with the projections of sea level rise published by the IPCC,” said Watson.
“Sea level rise is getting faster. We know it’s been getting faster over the last two decades than its been over the 20th century and its getting faster again.”
Professor Jonathan Gregory from the University of Reading and a lead author of the IPCC’s most recent climate report said the study was “interesting and useful” and shored up the predictions of the models.
“The better agreement of the altimeter record after the correction ... is a reason for greater confidence in the projections,” he said.
Sea level rise is measured using tide gauges on shorelines around the world and, since 1993, altimetric satellites. But both sets of data are imperfect.

The land the tide gauges sit on is constantly shifting.
For example, said Watson, measurements in Alaska are thrown out by the continent rebounding upwards after being covered in a heavy ice sheet during the last ice age.
While in Perth, Australia, the continental plate is subsiding.
The satellites orbit 746 miles above the Earth at 4 miles per second, firing beams of radar at the sea’s surface and recording the time it takes to bounce back.
Watson said their accuracy was “staggering”.
But the level of precision required to measure the slight but significant changes in sea level driven by climate change is very high.
During the 1990s the satellite instrumentation degraded, losing some of its accuracy.

Watson’s team were able to compare the two data sets and identify where each was going wrong.
The results revise downwards the average rate of sea level rise since the 1990s.
The IPCC’s landmark report in 2013 found the sea had risen on average by 3.2 mm per year since 1993.
Waston’s study found the rate was slightly slower, between 2.6 and 2.9 mm per year.
“I have no doubt there are members of the community who may wish to reevaluate [the predictions for sea level rise]. But as a scientist I come back to the data,” said Watson, preempting claims that the study was a scaling down of the threat of climate change to coastal communities.
“A single number implies that that rate is constant over time. And I think what is emerging here is that that’s not the case. That rate of change is actually increasing. For everyone that lives around the coastal margin, that’s a really concerning fact.”
In 2013, Gregory’s report to the IPCC predicted that sea level could rise between 28cm and 98cm by 2100 depending on how much carbon human industry emits this century.
“There is no reason to change the projections,” said Gregory.