Image of the week : modeling a small, blue planet 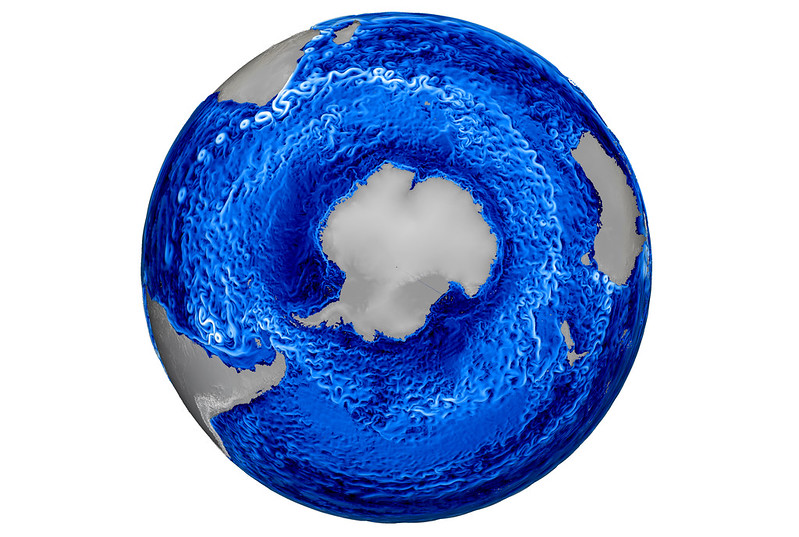 This visualization, courtesy of the Lab's MPAS-Ocean Model, shows ocean currents and eddies in a high-resolution global ocean simulation with the Antarctic in the center.
The image was created using Paraview software with the assistance of Phillip Wolfram


The oceans play an important role in the earth's climate; they transport heat from equator to pole, provide moisture for rain, and absorb carbon dioxide from the atmosphere.
Ocean models, such as this one from Los Alamos National Laboratory, help explain interactions between individual eddies that may be altered in a changing climate.
This visualization, courtesy of the Lab's MPAS-Ocean Model, shows ocean currents and eddies in a high-resolution global ocean simulation with the Antarctic in the center.


Colors show speed, where white is fast and blue is slow.
Detailed turbulent structures are visible throughout the Southern Ocean, where the Antarctic circumpolar current flows eastward around the globe.
Large eddies are particularly visible in the Agulhas current at the southern tip of Africa.
These ocean simulations are validated against satellite and shipboard observations.
Even though individual eddies occur on scales of 10-150 km, their cumulative effects have large and long-ranging consequences on the earth's climate.
In the Southern Ocean, eddies transport heat poleward.
The strength of large-scale circulations in the northern hemisphere is sensitive to the turbulence in the Southern Ocean.
Ocean models are used to test how these interactions may be altered in a changing climate.
This high-resolution simulation includes 90 million grid cells, ranging from 10 to 30 km in horizontal width.
It is run on a super computer using eight thousand processors.


The MPAS-Ocean model is developed at Los Alamos National Laboratory by the Climate, Ocean, and Sea Ice Model team (COSIM).
MPAS-Ocean is a component of the Accelerated Climate Model for Energy, a new climate model by the Department of Energy.