Putin makes his first move in race to control the Arctic Northern Fleet: Vladimir Putin rides in a submersible vessel in the Baltic Sea as Russia announces the resumption of its presence in the Arctic, a project that had been abandoned by the military after the fall of the USSR.
Sasha Mordovets/Getty

From Newsweek by Elisabeth Braw


In November, the Russian K-550 nuclear ballistic submarine Alexander Nevsky, submerged in the Barents Sea between Russia and the North Pole, successfully launched a missile that travelled its prescribed course to Kamchatka in Russia’s far east.
The Alexander Nevsky thus joins two other Russian nuclear submarines, which have, in the course of the autumn, conducted successful ballistic missile tests.

Russian nuclear submarines have long been based in Arctic waters, just as the United States keeps its fleet in the Atlantic and Pacific oceans.
Still, the missile tests from the icy region sent a chilly message.
The Alexander Nevsky and its brothers – the Vladimir Monomakh and the Yuri Dolgorukiy – belong to Russia’s new Borei-class nuclear submarine fleet, which can carry up to 20 of the country’s new Bulava nuclear missiles.
With its payload of 10 nuclear warheads capable of travelling up to 8,000 kilometres – the distance between, say, Moscow and Chicago – the Bulava is a fearsome weapon.
“Because of the Ukrainian situation, the West is reluctant to take into account that Russia is a nuclear power that’s investing heavily in its nuclear arsenal,” says Pavel Baev, a professor at the Peace Research Institute in Oslo and a former researcher at the then-Soviet Ministry of Defence.
Mighty though they may be, the Borei-class submarines aren’t much larger than the ageing vessels they’re replacing.
“You could argue that a few new nuclear submarines don’t make a difference,” says Baev.
“But Putin is engaging in nuclear brinksmanship. It’s a dangerous game that the West is reluctant to get involved in, and he seems to be betting that that will give him the upper hand.”
Though all five official nuclear weapons states – United States, Russia, France, Britain, China – are modernising their arsenals, Russia’s overhaul of its vast Soviet-era range is particularly ambitious. 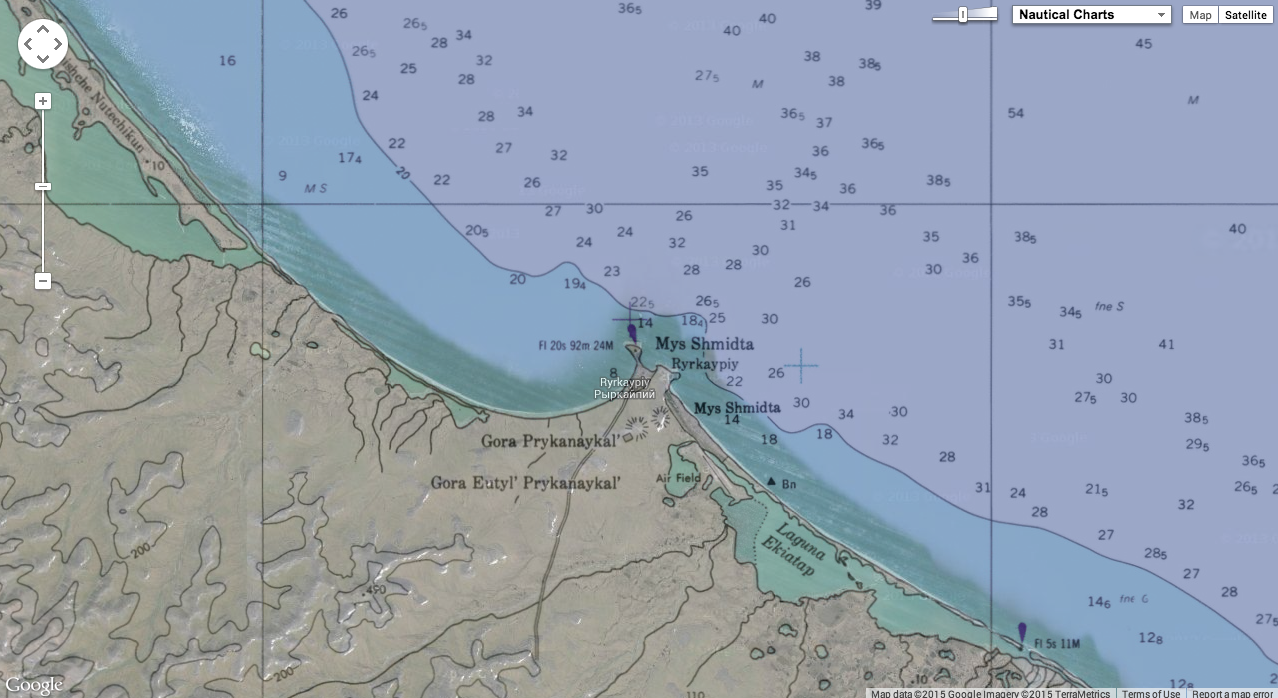 Cape Schmidt with the Marine GeoGarage


Nuclear brinksmanship aside, the military giant has embarked on a mission to leave footprints in the Arctic.
In October, defence minister Sergei Shoigu announced that Russia will deploy military units along its entire Arctic coast, “from Murmansk to Chukotka” (a distance of 4,700 kilometres).
The armed forces have begun building military facilities on Cape Schmidt in Russia’s far east and on the country’s Arctic Wrangel Island and Kotelny Island; next year the country is scheduled to open an airport at Cape Schmidt.
Earlier this year it reopened its northern Alakurtti military base near the Finnish border (featuring 3,000 soldiers), and on 1 December president Vladimir Putin announced that Russia’s Arctic command has become operational.

The concept of an Arctic race memorably introduced itself when Russian explorers planted a flag on the Arctic seabed in 2007.
Since then, cooperation has been taking precedence.
“But now the Arctic race is heating up, primarily because of Russia,” notes Baev.
“These sharply-increasing military activities don’t make much sense considering that Ukraine is Russia’s military priority right now, but the Arctic isn’t just Putin’s pet project. The Arctic is the one neighbourhood in the world where Russia feels strong.”
(Russia’s Arctic command did not respond to an interview request.)

It’s also the one neighbourhood in the world that has large untapped energy resources: some 22% of the world’s undiscovered oil and natural gas, according to the US Energy Information Administration.
With climate change making the Arctic ocean’s resources more accessible, energy giants from Statoil to Rosneft are testing the waters.
The melting ice is also making regular shipping more realistic.
Last year 71 ships carrying 1.4 million tonnes of cargo traversed the Arctic northern sea route – which cuts the travelling time from Shanghai to Hamburg by 30% – escorted by Russian icebreakers. “But most international shipping companies don’t favour the Arctic, and China’s massive new container ships can’t get through there,” explains Duncan Depledge, an associate fellow specialising in Arctic geopolitics at the RUSI, a London think tank. Indeed, the 71 Arctic transits pale compared to the 16,596 transits through the Suez canal last year.
But Sweden and Finland, home to regions north of the Arctic circle, are sensing opportunities and have opened Brussels offices promoting industrial development.
Even Poland has launched a GoArctic campaign.

Near the North Pole, as in the Middle East, oil and the military go hand in hand. “In the Arctic, Russia is the undisputed number one,” observes Katarzyna Zysk, an associate professor at the Norwegian Institute for Defence Studies.
“But Norway is trying hard to assert its role, especially since the high north plays a significant role in its economic and defence policy. Denmark and Canada are active too, and interest is increasing in the United States as well. These developments are closely followed by Russia, especially given the current tensions with Nato.”

Yet the reopened military bases may be more peaceful than they seem.
“All activities in the Arctic need some sort of security aspect,” says Depledge.
“In much of the Arctic, the military is the only institution that can perform that constabulary function.”

Here’s the catch: if one country makes military moves, its competitors respond.
Norway, Russia’s closest Arctic neighbour and home to Nato’s first Arctic military operations centre, has been moving troops and equipment north, and prime minister Erna Solberg recently announced that Arctic concerns have caused the country to keep its fighter jets at home rather than sending them on Isis-fighting missions.
In December, Norway introduced an extremely advanced spy vessel that will patrol its Arctic waters.

Indeed, if a second cold war unfolded, the front line would be not just along the Baltic states but right here in the Arctic, between Norway and Russia.
“Russia’s military actions on the European side of the Arctic worry Denmark as well as other Arctic nations,” reports Rear Admiral Nils Wang, commandant of the Danish Defence College and one of the country’s leading Arctic experts
“Though its reopened military bases also have a coastguard function, Russia is using them to send a strong message to the world and its own citizens that it will defend its Arctic presence if necessary. But the Arctic resources both off-shore and on-shore have already been allocated to the five Arctic coastal nations, so a conflict in the Arctic would more likely be a spillover from conflicts elsewhere, for example Ukraine.”
Denmark, too, has a new Arctic command, while Canada – long an aspiring Arctic superpower – makes its presence known by regularly dispatching naval vessels carrying Canadian flags and sometimes government ministers. Given that International Energy Agency predicts a 35% rise in global energy demand between 2010 and 2035, the quest for the Arctic makes perfect sense.
“Right now, with global energy prices low, it’s not very profitable to invest in Arctic energy exploration, but as far as Russia is concerned, it will remain interested whatever happens,” explains Zysk.
“The Russians feel that they have to move to the Arctic ocean to secure their energy future, and their military presence protects the country’s economic interests. They’re essentially saying, ‘we’re here’.”

That economic potential could spell doom for the Arctic. According to Greenpeace, “inevitable” oil spills would irreversibly harm the pristine region’s polar bears, seals, whales and fish.
“And who would clean up after an oil spill?” asks the environmental group’s Arctic campaigner Charlie Kronick.
“In the Gulf of Mexico, BP was able to deploy hundreds of ships and thousands of workers, and the Macondo well still released around four million barrels of oil.  Because the Arctic has none of the infrastructure or facilities available in the Gulf of Mexico, an oil spill would provoke an international incident when the oil starts travelling underneath the ice.”

Indeed, in spite of global warming, the northernmost continent on earth remains immensely cold.
As Putin made his Arctic command announcement, thermometers on Kotelny Island recorded -30 degrees Celsius.
“The Russian military’s existing Arctic bases are built Soviet-style and are not really appropriate to live in,” notes the Vladivostok-born Baev
“Even to reach them during the winter is extremely difficult. Arctic threats to Russia by Nato are negligible; in fact, right now nobody is threatening the troops except Mother Nature.”

That’s the sticking point: there is no real enemy.
As the ice of the Arctic ocean melts, its surrounding countries have a stronger interest in cooperation – or in hydrocarbons and shipping – than in confrontation that will feature sacrifice for uncertain rewards.
And for the time being, the Arctic showdown is mostly a play to the gallery.
“Russia is showing people at home that it’s still a major power, and the Canadian government is playing at threat perceptions to show our power and sovereignty in the Arctic,” says Frédéric Lasserre, a professor at the Université Laval in Quebec who specialises in Arctic geopolitics.
“It’s just a play to get votes.”