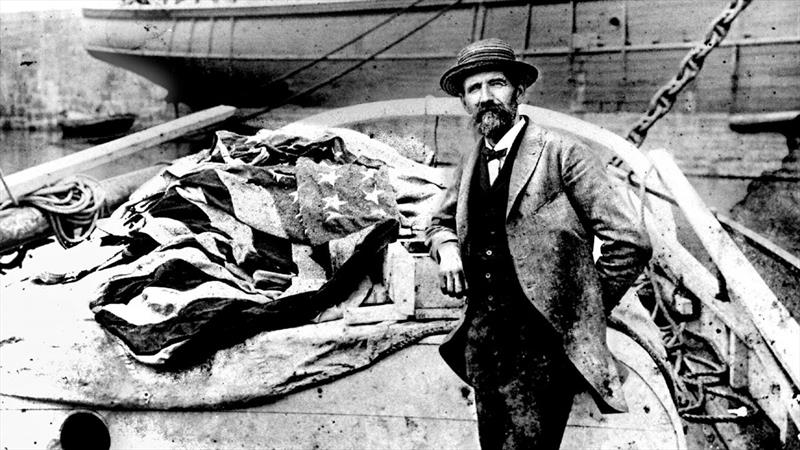 Global Solo Challenge © New Bedford Whaling Museum
From Sailing Cruising by Alper Günoral
For millennia, the ocean has been a gateway to new worlds, the starting point of journeys towards the unknown.
It was either the quest for food supplies or running away from the enemy.
Somehow, men jumped on the first basic rafts and started to navigate.
Specialised knowledge made it possible to navigate farther with the never-ending development of seafaring vessels.
If Homo Sapiens, the last surviving human race, has now spread to all continents, it is also thanks to intercontinental sea voyages.

I read R.L. Stevenson's Treasure Island when I was ten years old.
That novel made me curious about the world.
So, I studied the oceans and islands on world maps, then dreamed of the days I would go to those places.
Since the age of 15, when I chose sailing as my profession, I have worked in different positions, from washing sails to managing a whole warship.
Unfortunately, I have not been able to cross any ocean yet under sail, but there is a route I would like to follow one day and ports I want to visit.
One of the books I read is the story of Captain Slocum.
Captain Slocum grew up in a family of sailors and became a seafarer at a young age.
He was a captain for years, travelling to China, Australia, Japan, and Alaska.
Joshua crossed the oceans many times.
Until, one day, he settled in Fairhaven.

He became the first sailor to cruise around the world, alone, onboard his sailboat Spray at the end of the 19th century.
He published his story in a book titled Sailing Alone Around The World.
The language of the book is simple and the narration is so fluent that it makes the reader feel like he is travelling onboard Spray.
At the beginning of his book, he says that when the last ship he was captain of for years was scrapped, he felt empty for a while.
Then one day a friend came to Fairhaven, and said: "I found a ship for you". 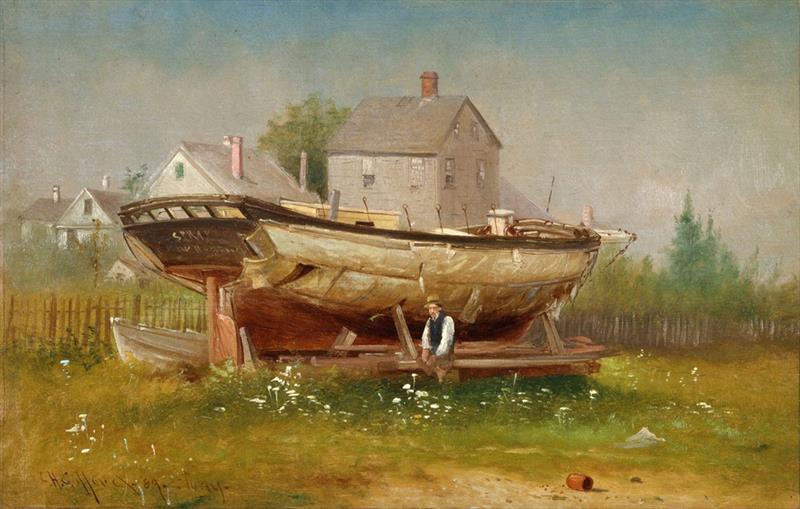 Global Solo Challenge - photo © New Bedford Whaling Museum
When he arrived at the pier where the ship was, he saw a small neglected boat and considered it just a bad joke.
Still, he was persuaded to repair the 37ft sloop, named Spray.
For 13 months, he felled trees with his axe and used them for parts.
Eventually, the boat was completely refitted and renewed.
He spent a total of $553.62 and transferred all of his experience to the refitting of the boat.

After repairing the boat, he tried to go fishing for a while.
But in his own words, he was not cunning enough to fool the fish.
Meanwhile, he decided to begin a voyage around the world and set sail from Boston on April 24, 1895.
When he set out, he thought that the rainbow he saw in the bow of his boat seemed to be bending towards his boat.
He interpreted this as an angel getting on board.

His first stop was Gloucester.
Let me quote from his own words as he entered this port under a strong wind.
"I made for the cove, a lovely branch of Gloucester's fine harbour, again to look the Spray over and again to weigh the voyage, and my feelings, and all that.
The bay was feather-white as my little vessel tore in, smothered in foam.
It was my first experience of coming into port alone, with a craft of any size, and in among shipping.
Old fishermen ran down to the wharf for which the Spray was heading, apparently intent upon braining herself there.
I hardly know how a calamity was averted, but with my heart in my mouth, almost, I let go of the wheel, stepped quickly forward, and downed the jib.
The sloop naturally rounded in the wind, and just ranging ahead, laid her cheek against a mooring pile at the windward corner of the wharf, so quietly, after all, that she would not have broken an egg.
Very leisurely I passed a rope around the post, and she was moored." Captain Slocum, who shrugged his shoulders to the master sailors who conveyed their congratulations from the beach, just said "what, it's nothing".

Global Solo Challenge - photo © New Bedford Whaling Museum
He got some supplies from Gloucester.
He wanted to have his chronometer repaired, which he described as a newfangled notion of navigation but gave up due to the expense of 15 dollars.
In the following days, he got a tin clock for one dollar and completed the whole voyage with that one.

After leaving Gloucester, he set course to Gibraltar.
He planned to reach Gibraltar and sail through the Mediterranean and then the Red Sea to reach the Indian Ocean.
But when he was a few miles west of Gibraltar, he came across some pirates and miraculously ran away.
Then he altered his course southwest to Brasil.
He continued south until he passed Magellan Strait, where some locals tried to rob his boat.
He put nails on deck when he slept at night, and laughed at the surprised cries of the bare-foot locals trying to get onboard.

Just after passing the Magellan Strait and heading west, he got into a terrible northeastern storm and had to go back to the east and stayed between the islands south of Chile.
After the storm, he continued west and visited Robinson curse's island before reaching Australia.
He then visited Madagascar and South Africa.
While in Africa he met some high-ranked European officials and had a hard time trying to explain to one of them how he sailed 'around' the world as the official believed the world to be a flat object.

In South Africa, he had a new member onboard: a goat which was given as a gift.
From South Africa, he sailed northwest and reached the Caribbean, but his new personnel ate his nautical charts.
Meanwhile, the United States and Spain declared war.
By chance, he reached the USA without encountering any Spanish ships.
But there was another problem waiting for him there: the entrance of the port of Newport was mined! Avoiding the sea mines, he sailed so close to the shore as "hugging rocks was less dangerous than embracing mines".
In Newport, he dropped anchor on June 27, 1898, at 0100, ending his 3-year and 2-month journey.
He then sailed two more days to take Spray to where she was born, arriving at Fairhaven on 3 July.

Along the way, Slocum came across many vessels, almost all the people seemed shocked at the notion that he was sailing alone.
Almost everyone exchanged some gift or at least an AHOY with each other.
He disliked any vessel that passed without saluting.

He didn't have navigation lights, but only a fisherman's lantern.
He also had a two-burner cabin lamp to have some light inside the boat.
As some makeshift tender, he cut a castaway dory in two athwartships, as there was no room on the boat for a full one.
He had a makeshift autopilot made out of lines and pulleys.

In the end, he gained half a kilogram throughout the voyage and his muscles got stronger.
His friends said he looked younger.
During the voyage, he earned some money from the interviews he made at the ports he visited, the visitors who came to visit his boat and exchanging materials like tallow.
In addition, in almost every port he visited, people provided food and repairs for free. 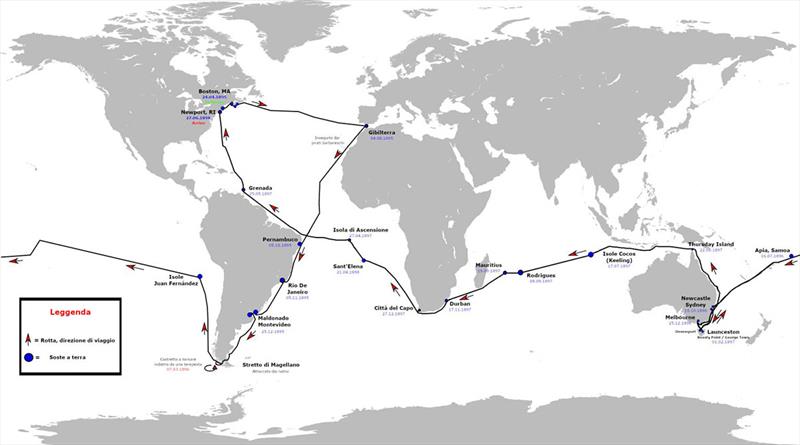 Global Solo Challenge - photo © medica8 – Wikipedia
All his experience is written in his book, Sailing Alone Around the World.
He made his mark in history as the first person to circumnavigate the world with a sailboat.
His adventure inspired dozens of sailors who would later repeat the same route.
I would like to convey the reason for the success of the voyage in the words of the Captain:

"To succeed, however, in anything at all, one should go understandingly about his work and be prepared for every emergency.
I see as I look back over my small achievement, a kit of not-too-elaborate carpenters' tools, a tin clock, and some carpet tacks, not a great many, to facilitate the enterprise as already mentioned in the story.
But above all to be taken into account were some years of schooling, where I studied with diligence Neptune's laws, and these laws I tried to obey when I sailed overseas; it was worth the while."
Links :
Posted by geogarage at 1:35 AM