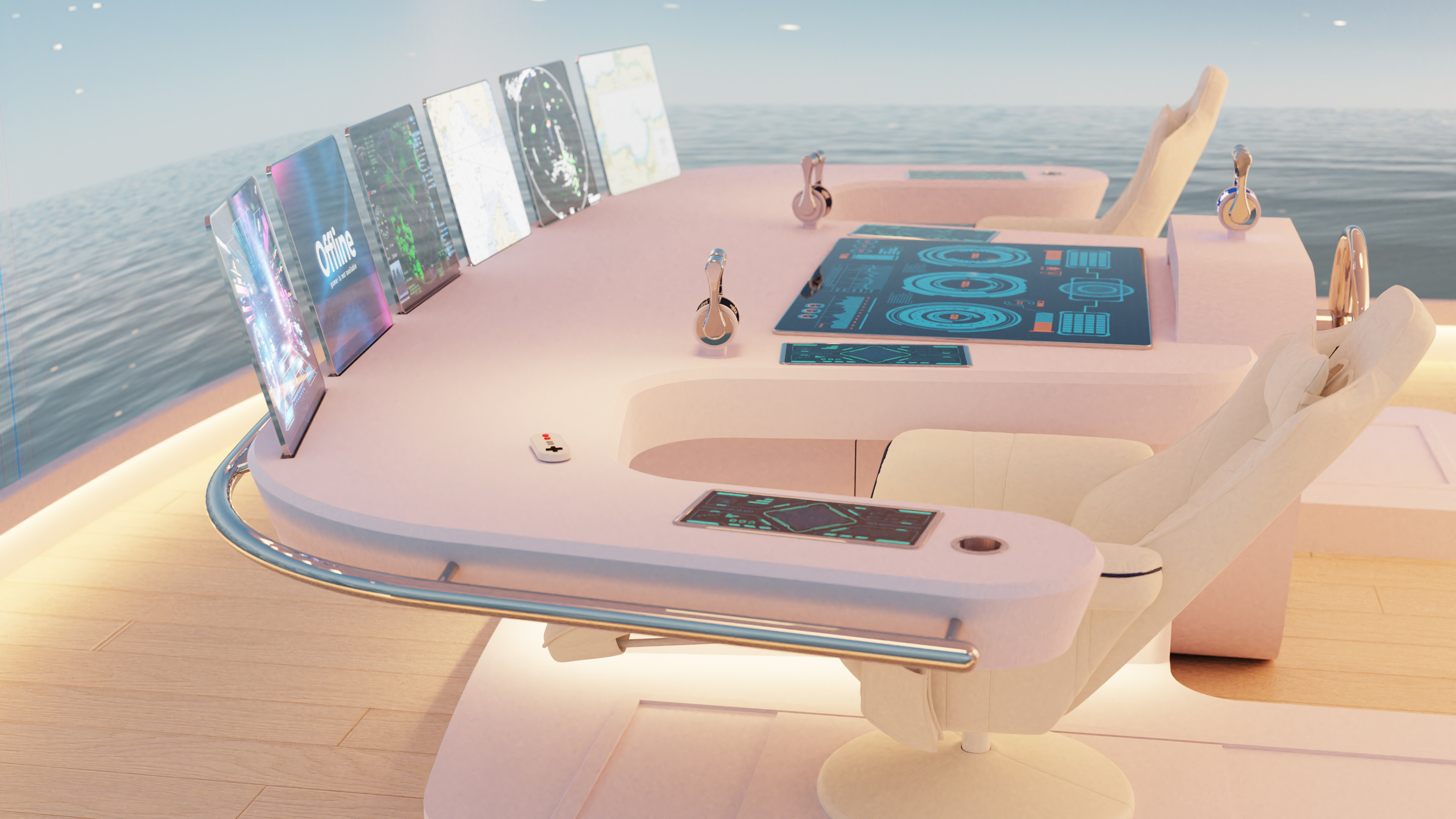 courtesy Feadship
From Robb Report by Gemma Harris
Autonomous navigation on superyachts will turn the pilothouse into an augmented-reality center buried below-decks.
That frees up prime real estate on top of the superyacht for the owners.

The pilothouses of most superyachts have undergone remarkable transitions from the strictly functional to space-age sophisticated over the last 10 years.
Hundreds of yards of cable and analog technology have been replaced by digital switching systems and sleek, Star Trek-style touchscreens.
The helm, now as stylish and advanced as the rest of the vessel, can rightfully take a bow.

We could soon see another major transition, this time towards fully autonomous navigation.
“When the technologies we’re working on are ready, they’ll bring a revolution to wheelhouse design,” says Massimo Minnella, founder of Team Italia, which specializes in creating custom pilothouses, including the spaceship-looking Air Bridge.

Various designers have been hard at work, penning autonomous conceptual designs straight from a science fiction movie.
There is Emmanuel Klissarov’s Moondance, Ultra Design’s Pagoda, Feadship’s Pure, and the Solaris concept from the Paul Agency.
“Increased autonomy and especially level 5 [full automation] will provide the designers with unprecedented freedom to express their creativity,” notes Klissarov. 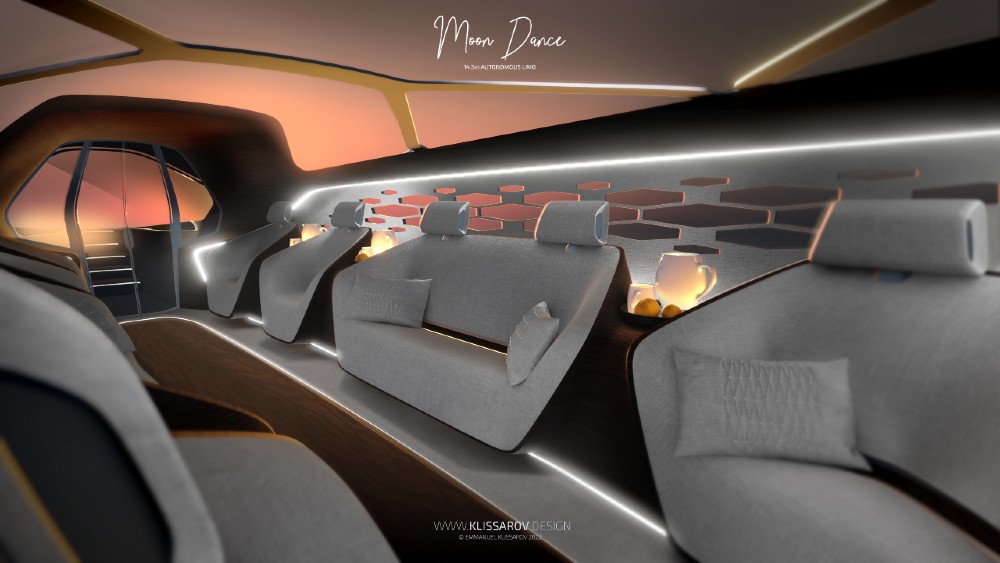 One of the byproducts of having no pilothouse is better views for owners and guests.
The superyacht launch Moondance is a good example.
Courtesy Klissarov Design
By its nature, autonomy allows designers to replace the human element of navigation in a conventional pilothouse with more innovative design possibilities—including redefining basic layouts.
“The interior layouts can be set free by autonomous navigation and situational awareness sensors,” says Joonas Vartola, head of design at Ultra.
Adds Klissarov: “There will be visible design changes in the overall look of vessels, proportion-wise, but also feature-wise with a significant focus outward. The yachts will open up.”

Translation: Superyachts may no longer need a conventional bridge on the upper forward deck of the vessel.
Designers can use those upper decks with 360-degree, uninterrupted views, for owners and guests.
Feadship’s Pure, for instance, has relocated its “Command Center” pilothouse to a lower deck, using 360-degree augmented reality displays to provide clear views of the water, with navigational data projected onto the screen.
The captain stands behind a small console deep inside the boat, with no windows, to control the ship.
The space that had been a pilothouse is now free for other uses.

Autonomy solutions are “already common on subs and naval vessels,” says Bram Jongepier, senior specialist at De Voogt.
Jongepier recognizes the “controversial proposal” of Feadship’s design, but adds that “superyachts revolve around their owners, and many prefer to have a forward-facing stateroom with panoramic views in the area where a wheelhouse normally is.
Placing the bridge higher up impacts the profile.” 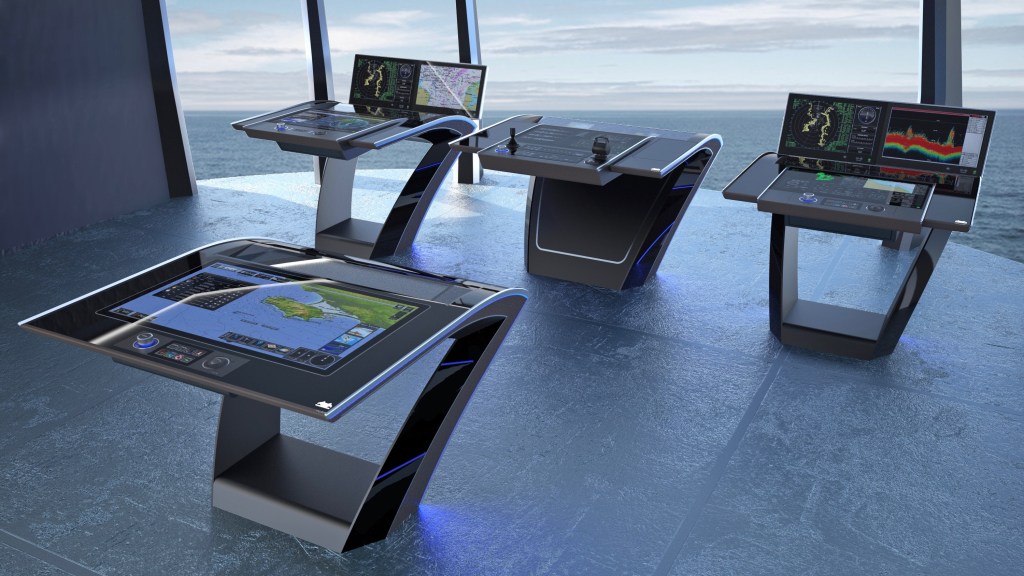 Fully autonomous boats are years away but pilothouse designers like Team Italia have been busy with new concepts like the Air Helm.
Courtesy Team Italia
Freeing up this space enables “the best ‘seats’ in the yacht to be reserved for guests and owners versus technology,” adds Joksa Heikkila from Ultra design, whose Pagoda concept also makes the boat look sleeker by removing the conventional pilothouse.

Other designers equate autonomy and enhanced views, but on other vessel types.
Klissarov’s Moondance is a limousine tender for a superyacht that’s autonomous, which frees up forward space for clearer forward views but the “variable opacity” of the hull sides (think tinting windows) and “stargazing” roof allows for a new type of experience for guests and owners going to and from the mothership. 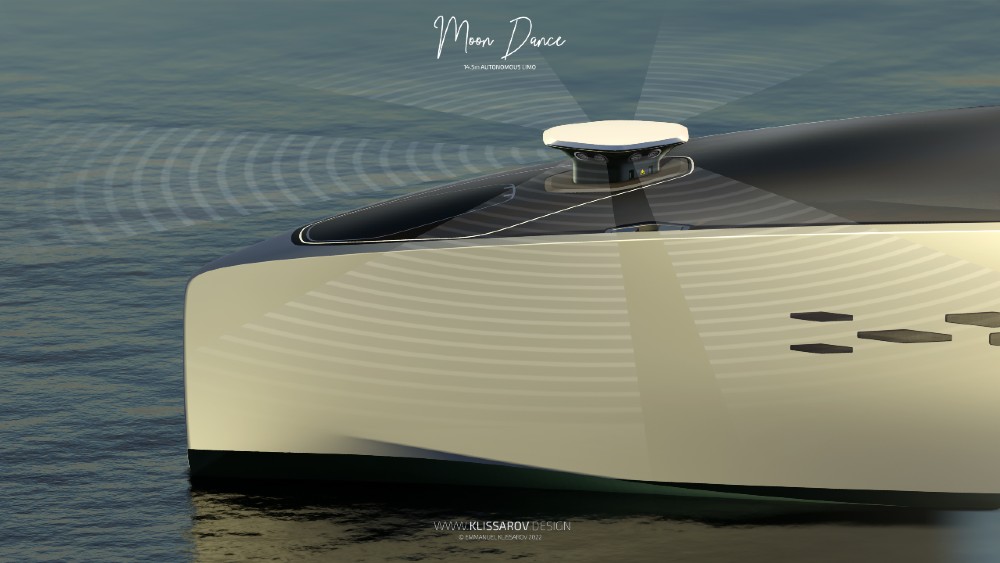 Instead of a captain at the helm, Moondance has an AI unit up front that performs all boat-handling functions.
Courtesy Klissarov Design
New ways to use the yacht will automatically flow from the autonomous changes, says Paul Cazaux-Debat of the Paul Agency.
“Improved autonomy will make the user experience easier and more enjoyable,” he says.
“Autonomy opens up the possibility to create different activities onboard.”

How that will eventually play out remains to be seen, but it’s clear that the autonomous revolution will be driving superyacht design as much as it’s steering the boat.