What happened to the lighthouse of Alexandria? 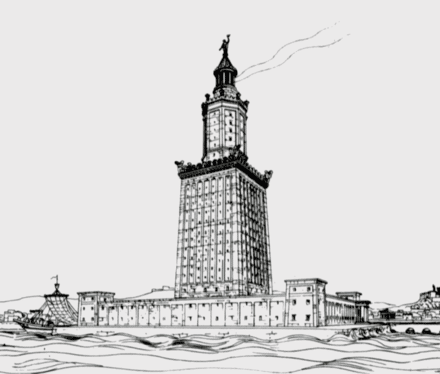 
From HistoryDefined by Carl Seaver

Between the third century BC and the fifth century AD, the city of Alexandria, named after Alexander the Great and sitting at the mouth of the River Nile Delta in northern Egypt, was one of the greatest cities in the world.

While Rome grew to become the political center of the Mediterranean world, Alexandria was its intellectual heartland and the economic hub of the Eastern Mediterranean.

Hundreds of thousands of visitors visited the city yearly to trade, conduct politics or visit the famed Library of Alexandria, the most excellent repository of learning in the ancient world.

As a result, dozens of ships would have sailed in and out of Alexandria’s harbor every day.
As they did, they would have passed by an enormous lighthouse built on the island of Pharos in the harbor, casting light over the waters at night-time.

Standing over 100 meters tall, this tower was the famed Lighthouse of Alexandria, one of the Seven Wonders of the Ancient World.

Map of Pharos Island and the Eastern Harbor. (Forster, 1961)
The Lighthouse of Alexandria

The Lighthouse of Alexandria was said to have been built by a Greek architect and engineer named Sostratus of Cnidus.

Sostratus is believed to have been hired by the Greek ruler of Egypt, Ptolemy I Soter.
He was employed early in the third century BC. Still, such was the enormous task of erecting the Lighthouse, the second tallest manufactured structure in the ancient world, that it took until around 280 BC to complete.

By that time, Ptolemy I Soter was dead, and his son Ptolemy II was the new ruler of Egypt.
We are lucky to have several detailed surviving accounts of the Lighthouse’s design and appearance, which ancient writers produced.

At the bottom was a broad, square section that formed the main support for the thinner upper layers and rose to forty or so meters.
The second level was effectively an octagonal tower that rose to about 70 meters from the base of the Lighthouse, which was in turn followed by the third and final thin layer.

This was a circular tower, at the top of which was mounted a giant statue.

One used a broad spiral ramp to ascend the Lighthouse, which led up to the top where the light emitted.

The light was produced by a huge furnace in which a fire was kept burning almost continuously.
Next to this was a huge mirror that could reflect the sun’s rays to send messages to ships entering and leaving the harbor during the daytime when the furnace could not be used.

The nature of the statue atop the Lighthouse has been a source of endless debate. 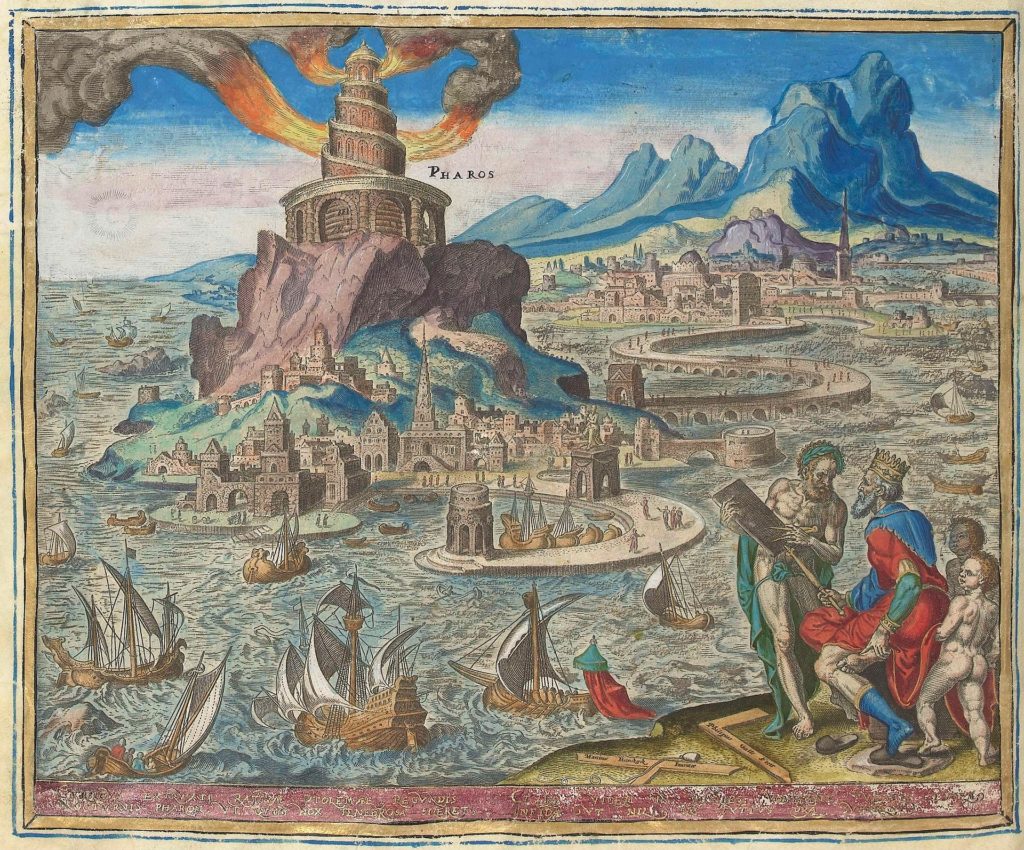 Lighthouse of Alexandria by Philip Galle; 1572
Some accounts suggest that the individual depicted was Alexander the Great.
In contrast, others contended that it was built to honor Ptolemy I Soter, who had patronized the construction of the Lighthouse.

Yet evidence from Roman coinage centuries later suggests that the statue here depicted either the King of the Gods in the Greek pantheon, Zeus, or the Greek God of the Sea, Poseidon.

There is also a possibility that four smaller statues of Triton, a lesser Greek maritime deity, were erected at the four corners of the roof of the Lighthouse.
The Destruction of the Lighthouse

Unlike several of the other Seven Wonders of the Ancient World, the Lighthouse of Alexandria survived through antiquity and beyond.

It suffered some degradation in the ninth century when Ahmad ibn Tulun, the Arab ruler of Egypt from 868 AD to 884 AD, had the beacon house containing the furnace and giant mirror removed, presumably along with the statues above as well.

This was done for a mosque to be erected at the top of the Lighthouse.
However, as much damage as Tulun inflicted on it, the Lighthouse would ultimately meet its demise in the same way three of the other seven wonders did. It succumbed to earthquakes.

One in 956 AD damaged it badly, with the top twenty meters comprising most of the top layer collapsing into the harbor.

Then in 1303 AD, an enormous earthquake that emanated from the island of Crete and caused damage throughout the Eastern Mediterranean destroyed most of what was left of the Lighthouse.

Whatever fragments of it were left standing after that were gradually removed and used for other building projects by the Mameluke rulers of Egypt.

A French underwater excavation team in the 1960s first recorded that they had identified large masonry blocks lying in the harbor of Alexandria.

However, it was not until 1994, when underwater excavation and marine archaeology methods had developed considerably, that the site was further studied in the waters around Pharos Island.

Marine archaeologists identified approximately 2,500 large stone blocks, which they believe were once part of the Lighthouse of Alexandria.
Additionally, they found pieces of what may be the statue that once stood at the structure’s peak.

Some of these blocks have since been lifted from the sea floor and placed in museums in Egypt. However, most remain confined to their watery grave, as these are extremely large and difficult to resurrect.

For many years there have been plans to construct an underwater museum near Pharos Island that will bring to life the remains of one of the Seven Wonders of the Ancient World.
However, progress in developing this has been slow.
Links :
Posted by geogarage at 1:58 AM