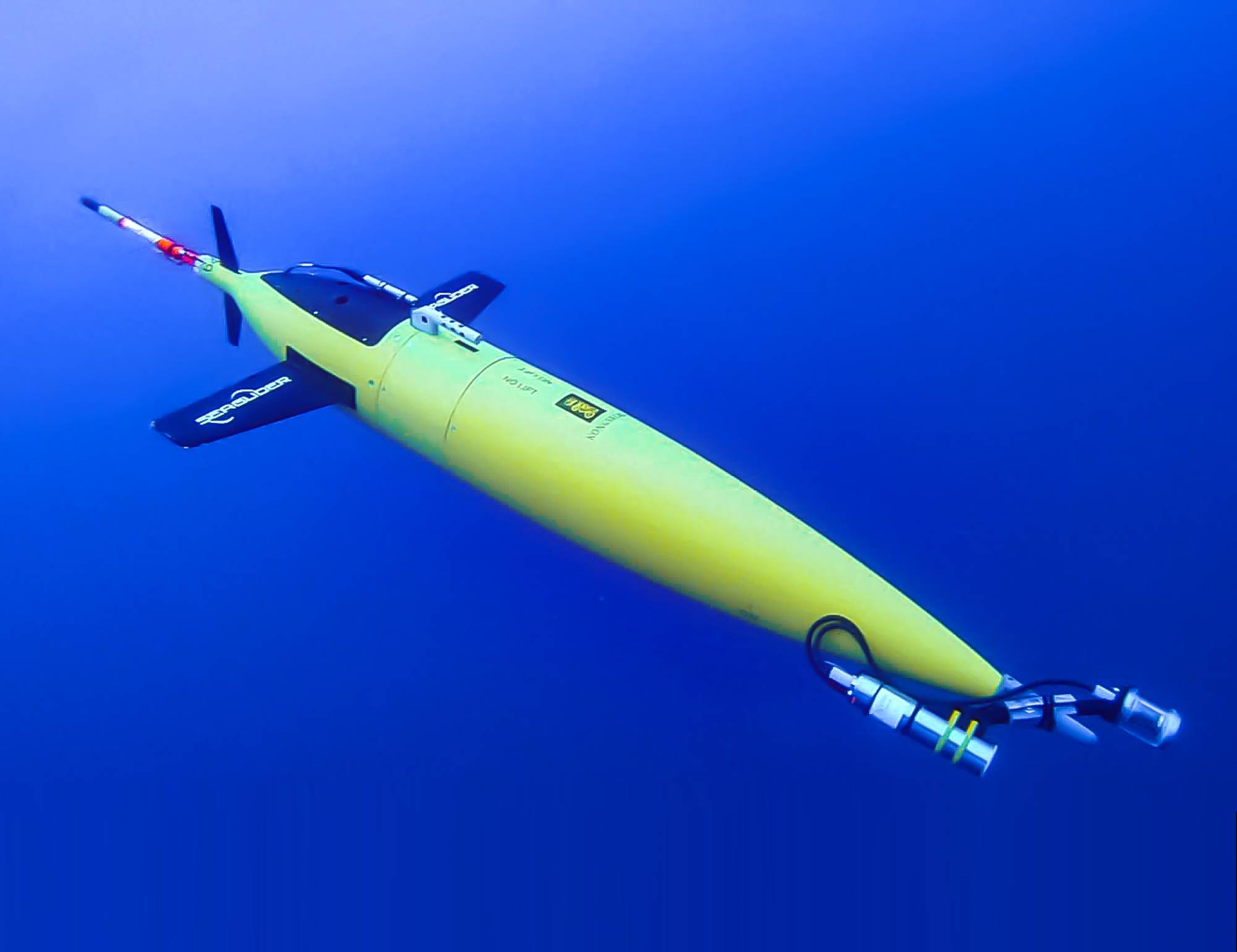 Image from Yves Ponçon, Bioglider project coordinator.
From Marine Technology News by Elaine Maslin
Expanding the amount of work that gliders can do was a key topic at this year’s Marine Autonomous Technology Showcase.

Building useful datasets that allow a better understanding ocean of ocean variables has long been a challenge.
It’s not that long ago that ocean temperature data was limited to surface temperature and the same goes for many other parameters.

With around two decades of their use now banked, users are now looking at how much more these vehicles can do, from carrying biological sensing payloads or towing towed arrays, the Marine Autonomous Technology Showcase (MATS), held at the National Oceanography Centre in Southampton and online heard early November.

Blue Ocean Marine Tech Systems is one of those who have been using gliders for some time.
Initially this was in the energy sector, with parent company Blue Ocean Monitoring doing tasks such as marine mammal monitoring during seismic acquisition campaigns.
But Blue Ocean Marine Tech Systems is now also working in the defence realm, including developing a towed array system for gliders under the UK Royal Navy’s Project HECLA.

James King, Managing Director UK at Blue Ocean Marine Tech Systems, says buoyancy driven gliders lend themselves to monitoring applications, thanks to their low noise footprint.
Also, because they’re buoyancy driven, they use a small amount of power, so they can stay deployed for months at a time.

That lends them well to tasks such as submarine hunting, something that the Royal Navy has been trialling under Hecla, including deploying Slocum gliders in the North Atlantic for months at a time to gather various ocean data, including salinity, sound velocity and temperature – useful information (dubbed “tactical hydrography, meteorology and oceanography”) for operating submarines – and send it back to shore by surfacing. 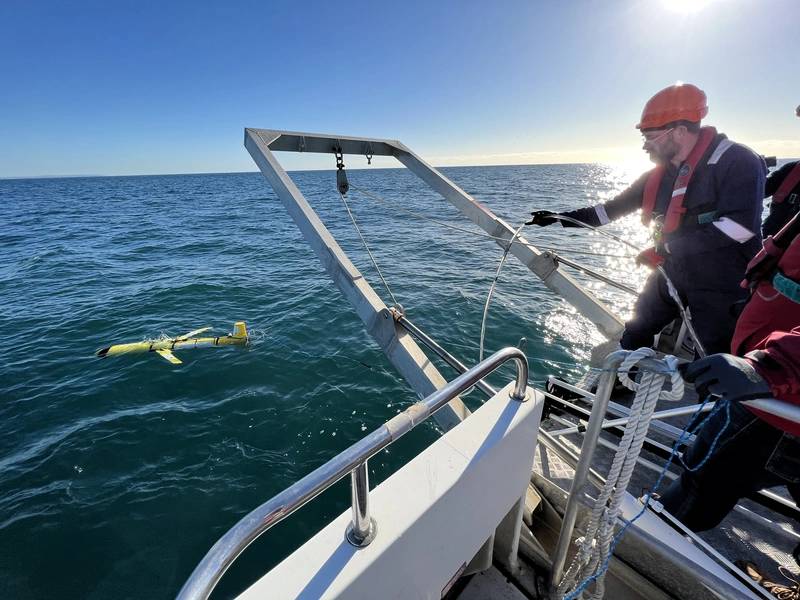 Blue Ocean Marine Tech Systems’ towed array deployment under the Royal Navy’s Project HECLA.
Image from Blue Ocean MTS.
However, what if they could also tow an array to detect human-made noise, i.e. vessels?
This was what the Hecla Project tasked Australia-based Blue Ocean Marine Tech Systems’ UK team with.
For the project, they chose to trial Seiche’s Digital Thin Line Array, a miniaturised (20mm), low power towed passive acoustic array, King told MATS.
It’s already been trialled with traditional autonomous underwater vehicles (AUVs) or uncrewed surface vessels (USVs), that hosts eight digital hydrophones (and can be configured to take up to 32).
As the glider is a slow platform, operating around 1kt, drag was a critical factor.“We set out to determine if a buoyancy driven vehicle can tow an array given that it is a finely ballasted vehicle,” says King.
“Can an array be used for marine acoustic data collection and how can the data be used?”

Blue Ocean MTS ran three trials out of Plymouth, where tidal variations and vessel activity offer a challenging test area for the system, initially using a dummy array, to prove the tow-ability.
Then, once they’d proven that, working out that with the addition of a thruster, they’d be able to improve control, they moved to a real system, containing four active hydrophones.
While there were issues with plastic in the ocean jamming the thruster and rudder, the trial proved the ability to gather acoustic data.
Mark Burnett, Director at Seiche, who also spoke at MATS, says the glider’s self-noise was such that the array could pick up other signals, including a vessel passing close to the array, proving it could pick up anthropogenic (man-made) noise.
Through processing they were able to correlate signals to marine mammal noise, specifically, minke whale, so that meant biological noise could be detected too.

On the third trial, more adjustments were made, including to the thruster guard and how the towed array – now 10m-long with eight hydrophones – was coupled to the glider to make controlling the glider better.
This time the glider stayed within a planned operational area.
They also used a known source, a D11 transducers to mimic machinery noise, and tracked AIS so they could correlate it with acoustic data from the hydrophones and the glider’s location data.

Burnett says one of the goals was real-time processing to get real-time information about what’s in the water.
This meant signal processing and software integration into the glider, but, with the longer array, also improving the power supply to reduce noise.

“We were able to correlate with AIS and could see a cargo vessel passing within 2.45nm of the array,” says Burnett.
“We were also able to collect biological data.
We observed a pod of common dolphins from the vessel we were on so could time stamp the data and had good corroboration.
We could also see machinery start up noise (in the data).
In parallel, we developed signal processing, as part of a three-year knowledge transfer partnership with the University of Bath, using a low power, low footprint FPGA (field programmable gate array) to process data in real time.”

They then looked at the initial four hydrophones and processed the data to beam form and get three beams – forward, aft and broadside, to get automated detections – proving this capability.
The idea is that information is then sent to the vehicle command and control system so it can get a better bearing on the target and or surface to communicate that it’s made a detection.
More trials are expected to be carried out in the new year.

One project is looking to endow gliders with biological sensing capability.
Bioglider is a two- and half-year Horizon 2020 ERA-NET Cofund MarTERA project ending next September.

“Autonomy is a game changer as they can stay at sea for months,” he says.
As well as gathering oceanic data as they “yo-yo” through the water column, they could also be used to acoustically gather and then transmit (once at the surface) data from remote underwater moorings that are otherwise hard to reach.
As well as for research work, this capability to track biological elements could also be used in fisheries or in oil and gas, he says (ConocoPhillips is among the financial supporters of the project).

To date, putting biological sensors on commercial gliders hasn’t been done, he says.
Scripps Institution of Oceanography had developed the Zooglider, which takes images and acoustic measurements of zooplankton (a key element of the aquatic food chain), but this was a research project and nothing has been developed in the commercial realm.

A project, called Bridges, which ran 2015-2019, had focused on miniaturising instruments for use on to gliders.
This included the UVP6 (Underwater Vision Profiler 6, an imaging sensor with strobe lights to take pictures of zooplankton).
A DeepEcho module - a blackbox that allows for easy integration of the WBT Mini, a miniaturised version of Kongsberg’s EK80 multibeam echosounder, into the gliders – was also developed.

The Bioglider project was set up to apply these on to three commercially available gliders: a Huntington Ingalls Industries (HII) SeaGlider, a Teledyne Slocum and an Alseamar SeaExplorer.
A key part of this is software; the echosounder was developed to work horizontally, but gliders go up and down all the time.
The Seaglider has been on two missions, one in May 2022, then again in October 2022, on the Polar Front campaign in the Lofoton Islands area.
The Slocum WBT Mini integration is in progress on the G2 and G3, with the first mission targeted in June 2023, also as part of the Polar Front mission, with discussions ongoing around work on the SeaExplorer.
The UVP6 has already been used on the SeaExplorer.

Initial data looks really promising, says Ponçon.
“We can have an echogram with very good acoustic measurements,” he says.
“We can see phytoplankton blooms and on the glider we can go to 1,000 m water depth and profile and couple that with the UVP6 to give more precision to the biomass we deliver.”
All while still having existing payloads, such as CTD and oxygen sensors, he says.
“For moderate cost we can have this all in one platform that can be autonomous and be at sea multiple months to 1,000 m water depth and bring some really great data,” says Poncon.

In addition, the platform could gather data from scientific moorings that are otherwise hard to reach.
Therefore, the project is also looking to integrate modems onto moorings and on the glider to acoustically communicate with moorings and retrieve their data.
First trials for this element are expected in Sprint 2023, with field tests in summer 2023. 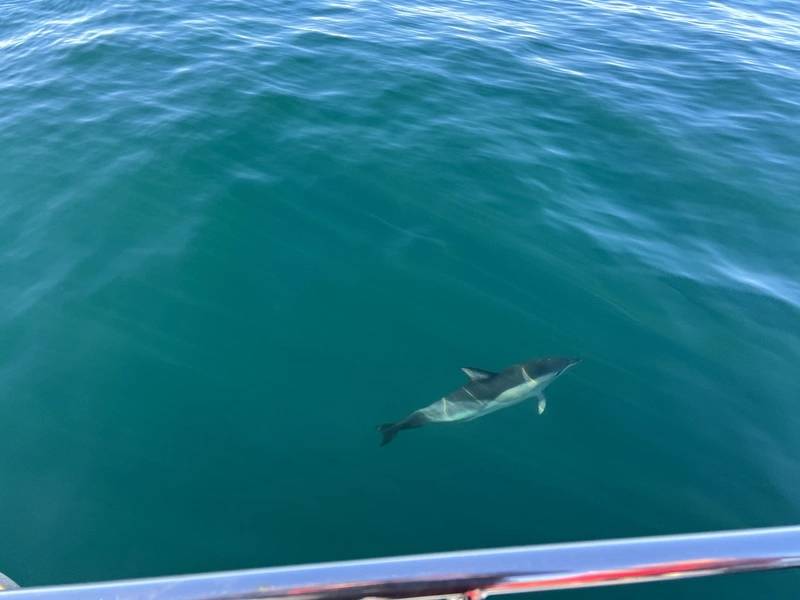 A closeup of the Common Dolphin visually corroborated during the trials.
Image from Blue Ocean MTS.
Posted by geogarage at 1:43 AM