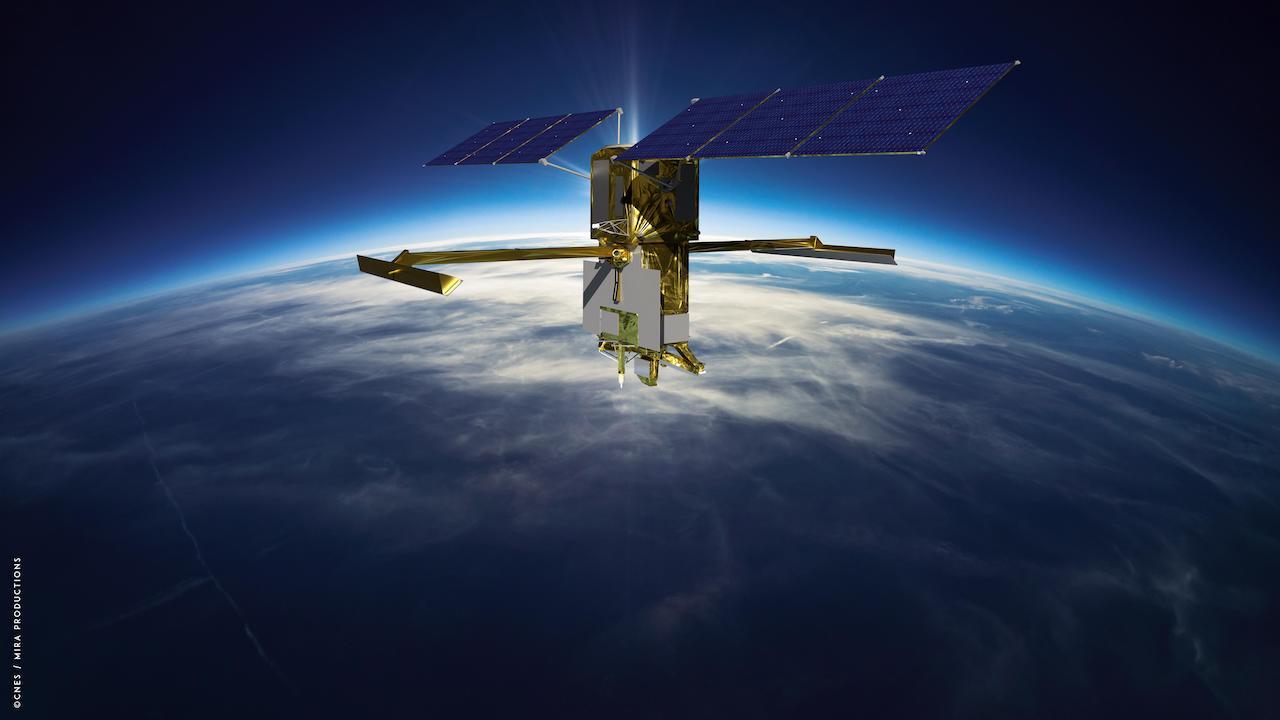 Once deployed in space after its launch from Vandenberg Space Force Base on Dec.
16, the Surface Water and Ocean Topography (SWOT) satellite will make measurements of sea-surface height with higher spatial resolution than any previous orbital platform.
That means currents and eddies larger than 10 miles (16 kilometers) across, a 10-fold improvement in satellite resolution.
The satellite will be capable of measuring sea-surface height close to the coast and even within estuaries and river deltas worldwide.

“It’s going to revolutionize coastal science,” said Marc Simard, a senior scientist at NASA’s Jet Propulsion Laboratory in Southern California and a member of the SWOT science team.
“SWOT will also provide us with reliable tools to support management of our coastal landscape.”

SWOT’s higher resolution is the key to closing observational gaps.
Tide gauges, instruments on the surface that keep track of sea levels, can have long records but spotty coverage on many of Earth’s coastlines.

“Satellite altimeters measure to within a few tens of kilometers of the coast,” said Ben Hamlington, a NASA sea level scientist at JPL.
“SWOT will get even closer, to less than 10 kilometers. So it’s going to fill that satellite observation gap. And it will be a potential bridge between open-ocean altimetry and tide gauges at the coast.”

The key to gaining such a high-resolution picture of Earth’s ocean is SWOT’s Ka-band Radar Interferometer (KaRIn) instrument.
The radar pulses it bounces off the surface are captured on their return by two antennas, mounted at opposite ends of a 33-foot (10 meter) boom.
That allows the antennas to scan two parallel swaths of Earth’s surface on either side of the satellite, each swath some 30 miles (50 kilometers) wide.
This, in turn, helps to precisely triangulate the height of water.

SWOT will cover the entire surface of Earth between 78 degrees north and 78 degrees south latitude at least once every 21 days.
That will provide a far more complete picture than previous satellites, including of the tumultuous coastal zone.
New Tools to Anticipate Coastal Change

As sea levels rise in the decades ahead, coastal managers, civil engineers and others will have to make difficult – and potentially expensive – decisions: building barriers against the surf, siting new development projects at higher elevation, engineering new drainage and channel systems.

Mitigation work will be needed to protect coastal infrastructure such as homes, energy facilities, and military installations.

Planning such projects relies on computer models that preview their possible effects.
But at the moment, satellite data on the coastal zone lacks the precision accurate modeling requires.

“We don’t have the measurements, so the hydrodynamic models that we’re building are wrong,” Simard said.
“We need measurements to calibrate and validate the model.
SWOT will provide that globally.”

Not only coastal infrastructure but agriculture and natural ecosystems will likely see significant alteration.

“You might have rice fields or shrimp farms or whatnot,” Simard said.
“We can use those models to manage the situation, or prevent unforeseen issues.
Or at least, foresee the issues.”

Even decisions about human health could be influenced by SWOT’s observations.
These are expected to help researchers understand how – and where – the ocean absorbs heat and carbon, which affects global temperature and the pace of climate change

“SWOT will finally zoom in on our coasts and bring into focus issues related to both water quantity, like coastal sea level rise and flooding, and water quality that impacts eco- and human systems,” said Nadya Vinogradova Shiffer, SWOT Program Scientist and Manager at NASA HQ, Science Mission Directorate in Washington.
More About the Mission

SWOT is a collaboration between NASA and the French space agency, Centre National d’Études Spatiales (CNES), with contributions from the Canadian Space Agency (CSA) and the UK Space Agency.
NASA’s Jet Propulsion Laboratory leads the U.S.
component of the project.

For the flight system payload, NASA is providing the Ka-band Radar Interferometer (KaRIn) instrument, a GPS science receiver, a laser retroreflector, a two-beam microwave radiometer, and NASA instrument operations.
CNES is providing the Doppler Orbitography and Radioposition Integrated by Satellite (DORIS) system, the dual frequency Poseidon altimeter (developed by Thales Alenia Space), the KaRIn radio-frequency subsystem (together with Thales Alenia Space and with support from the UK Space Agency), the satellite platform, and ground control segment.
CSA is providing the KaRIn high-power transmitter assembly.
NASA is providing the launch vehicle and associated launch services.
To learn more about SWOT, visit: https://swot.jpl.nasa.gov/.
Links :
Posted by geogarage at 1:24 AM