www.onsonorousseas.com
From The Guardian by Patrick Barkham

The artist spent 10 days sailing with scientists to listen for the impact of sonar on cetaceans.
In her new collaborative exhibition, she uses whale bones, sound recordings, video and poetry to probe our relationship with the creatures 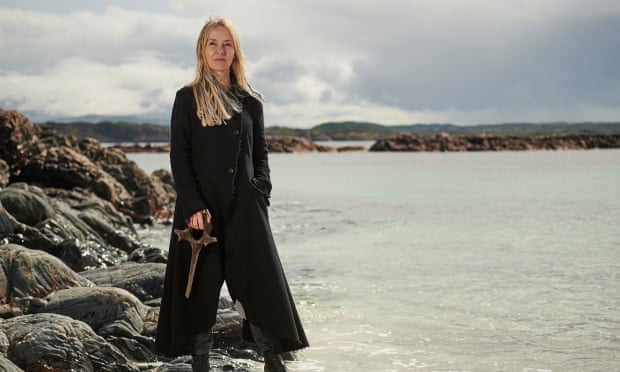 The tides that bind … Mhairi Killin examines our relationship with the sea and its creatures.
Photograph: Shannon Tofts
When a dead whale washed ashore on the Hebridean island of Iona in the summer of 2018, artist Mhairi Killin was as intrigued as many other islanders.
“It’s a beauty spot and people walk there regularly – it wasn’t long before there was a bit of a buzz around the island that there was a whale,” she says.
“That’s been the same since prehistory, when a whale ashore would be a source of food and oil and bone for artefacts.”

Why the whale had died was a mystery, which deepened that autumn when it was revealed to be one of more than 100 carcasses of mostly Cuvier’s beaked whales found on the west coasts of Scotland and Ireland.
Scientists began investigating if military sonar could be responsible, giving Killin the subject for a new collaborative exhibition, which opens on the Isle of Mull this summer.
On Sonorous Seas uses whale bones, sound recordings, video, poetry and objects derived from the stranded whales to examine the clash between our veneration for these enigmatic mammals and the way we increasingly fill oceans with noise – and sonar in particular.

Killin, who has lived on Iona for 25 years, believes our fascination with whales comes from their mystery but also a sense of kinship.
“We are connected to these non-human beings,” she says, “but because they are rarely sighted, there’s a mystery attached to them and their underworld.
When there’s an opportunity to have a fragmentary connection to these creatures who were our ancestors, there’s an element of wonder, mystery and awe.”

Beaked whales are some of the least-known mammals on the planet, breathing like us and yet capable of enduring depths of 3km, chasing squid in the dark ocean.
In such blackness, the species is utterly dependent on sound to navigate, find food and communicate.
These whales are rarely seen alive and yet they make up a wealth of marine life off Scotland’s coast, an area of global importance for cetaceans where 24 species exist, more than a quarter of the whale and dolphin species found worldwide.

Killin’s exhibition, which includes collaborations with Glasgow-based musician Fergus Hall and Mull-based poet Miek Zwamborn, is founded on a research trip she took with the Hebridean Whale and Dolphin Trust (HWDT) last year to discover the impact of sonar on cetaceans.
For 10 days, she sailed with scientists, listening intently to a hydrophone towed behind the small boat recording the sounds of the sea.

“Globally, whale and dolphin populations are facing huge pressures in the marine environment,” says Alison Lomax, chief executive of HWDT.
“The same kinds of problems – busy, noisy, polluted seas – are also a problem in Scottish waters.
These animals are incredibly sensitive to noise, and the increase in noise across our seas is a concern.”

Twice each year since 2008, the HWDT undertakes a survey at the same time as Exercise Joint Warrior, the largest military exercise in Europe, which occurs in the North Atlantic off Scotland.
The charity is gathering long-term data on sounds and sightings to understand how military sonar from submarines in particular might damage cetacean life.
We understand the military has to carry out its exercises.
So how can these values overlap in a way that's not damaging?
For one minute every 15 minutes over eight hours, Killin would listen to the hydrophone.
“It was an incredibly informative – I would say transformative – exercise in deep listening,” she says.
“I heard a dolphin whistle and snapping shrimp, tiny organisms that create noise like frying bacon.” But she was also surprised by how much anthropogenic sound she detected.
“I heard boat noise, seal deterrents around fish farms, and lots of sonar.
The sonar was very present – we could hear it without putting the headphones on,” she says.
“The sea is an industrialised soundscape.”

Killin saw killer whales – and also encountered naval warships.
During a military exercise, GPS in the area would be temporarily jammed.
“We were in a 19-metre sailing boat managing a 30mph wind and our GPS was jammed and we were radioed by one of the military ships and told to turn around and get out of the area.” A military helicopter later buzzed them, but Killin didn’t consider this intimidation.
“We were in their space, that was all,” she says.

Unfortunately, the military is sometimes in the whales’ space – and frequency – as well.
Mid-frequency active sonar is exactly the frequency range that the deep-diving beak whales need to hear.

Andrew Brownlow, director of the Scottish Marine Animal Stranding Scheme, helped investigate the mass stranding of 2018.
“The impact of noise on marine animals is not something that’s easy to detect, either from the examination of living animals or the examination of bodies,” he says.
Postmortem techniques can detect physical changes to whale ears and ear cells, while physiological changes such as bubbles of nitrogen dissolved in the blood may reveal noise-induced damage.
One way in which sonar could cause whale mortality is by frightening whales so they swim to the surface too quickly, causing potentially fatal decompression sickness, as human divers experience.

Brownlow points out that the correlation between mass strandings of deep-diving mammals and naval activity: the Canary Islands was once a hotspot for strandings but they ceased in 2004 after a moratorium on nearby naval exercises.

In the 2018 Scottish and Irish stranding, the bodies of the beaked whales were too decomposed to offer many clues about cause of death, but scientists studied winds and currents to deduce that the animals came from an Atlantic area known as Porcupine Bank, full of underwater valleys and particularly rich in marine life.
Such undulating underwater terrain is also a favoured location for hiding submarines – and is used for military manoeuvres by many nations, including Russia.

Last year, the Navy admitted it was operating in the area at the time the whales were stranded and said it acknowledged the risks that active sonar posed to marine life, funded research into this and took precautions to minimise risks.
Strategies to stop loud sonar damaging whales could be to start any sound quietly before increasing the volume so the animals are warned.
Brownlow, who praises the Ministry of Defence for engaging with scientists, says such measures may be impractical “in the theatre of war”.

Killin is keen to draw our attention to the wonder of whales but her exhibition does not seek to draw a binary conclusion – “military bad, whales good”.
“We understand the military has to carry out its exercises.” she says.
“So how can these two sets of values overlap in a way that is not damaging? That’s what the work is about.
I’m trying to bring people into the complexity of this issue.
This is what artists can do – help us observe in a different way and perhaps gain a different perception of things.”