The tragic story of the Edmund Fitzgerald, whose crew was never seen again 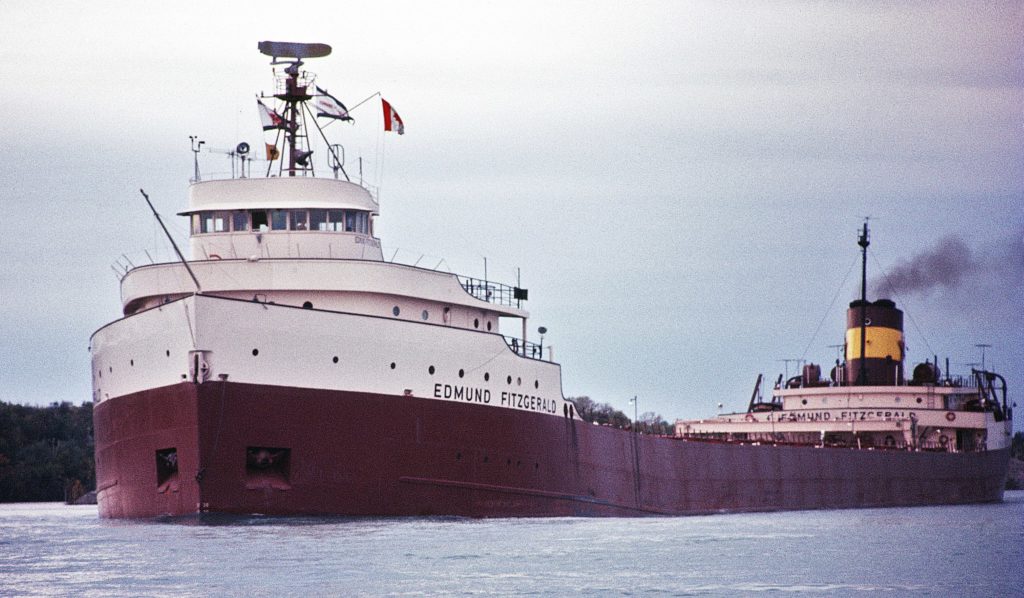 The Edmund Fitzgerald was lost with her entire crew of 29 men on Lake Superior November 10, 1975, 17 miles north-northwest of Whitefish Point, Michigan.
Whitefish Point is the site of the Whitefish Point Light Station and Great Lakes Shipwreck Museum.
From History Defined
The Edmund Fitzgerald was a ship that carried cargo across the Great Lakes for over two decades.
Then, on November 14, 1975, the boat sank in a violent storm, taking 29 crew members on board.
The disaster has been the subject of numerous songs and articles and remains one of the most tragic accidents in maritime history.

The Edmund Fitzgerald was a Great Lakes freighter that sank in a storm on November 14, 1975, and few understand what happened to cause the freighter to sink.

The ship was carrying a cargo of iron ore pellets weighing about 26,100 tons, and it left from Superior, Wisconsin, heading to the steel mill on Zug Island.
The trip was nothing special, and it was a routine run that the ship had done many times in its 17-year run.
There should have been nothing about the trip that the ship couldn’t handle with its advanced radar and technology.
The trip came at the end of the year, right when the weather was getting colder and the waves were getting higher.

The Edmund Fitzgerald was one of the largest ships on the Great Lakes at the time, measuring 729 feet long, 39 feet tall, and 75 feet wide.
Quite literally, the ship was barely able to pass through the Saint Lawrence Seaway.
It was built with a double-hull design to protect against sinking, and it had a crew of 29 experienced sailors.

This ship was designed to carry these taconite (iron) pellets to ironworks from Duluth to places like Detroit and Toledo.
Still, many are puzzled at how this gigantic boat could have sunken like that when it was made to withstand any water conditions.

Word of an approaching storm from the National Weather Service was announced a gale warning for Lake Superior.
How Storms Affect Lakes And What That Means For Ships

The exciting thing about Lake Superior is that it takes a lot to create big waves.
Even when there are big waves, they don’t usually last long.

The problem with this particular storm was that it was a bit different than typical storms that pass through the area in November and the freighter was in the wrong place at the wrong time.
Ultimately, the storm would generate hurricane-force winds and waves on Lake Superior that would reach approximately 25-35 feet high.
That wouldn’t have been such a problem for the Fitzgerald had the storm not moved consistently and changed the direction of the wind.

The crew altered their course to have land protect them from the giant waves of a storm, but the storm moved and put the freighter directly in the path of the storm and its waves.
Considering the physical size of Lake Superior, storm conditions can be pretty treacherous on the Great Lakes.
Generally, storms can produce steep, short-period waves, which are hazardous to large ships like the Fitzgerald.

But why specifically are waves like this dangerous for larger vessels?
To understand the importance of waves and possibly what happened to Fitzgerald, we need to discuss the concept of waves.
How The Great Lakes Can Sink Ships

It’s estimated that over 6,000 ships and 30,000 lives have been lost in the Great Lakes over its history due to how the Lakes affect ships.

It was a typical November that year, but around the 8th, storms were forecasted to be in the Fitzgerald’s direct path, and so as the storms grew stronger and approached the Fitzgerald’s planned route, they learned they might have to change course.

This wasn’t a problem as the route would take them north toward the coast of Canada; the northern way would protect them from the massive waves generated by the storm.
Generally, a course change would be all that was necessary, but this storm wasn’t typical.
Unfortunately, the storm constantly moved, changing the wind direction and the waves heights.

By the time the freighter had made it to Whitefish Bay, they were forced to take a more southerly route which put them in danger of the giant waves.
The waves were so big that they started breaking over the ship’s decks, and the water washed over them.

By the time conditions had worsened, the ship had lost a rail, two ventilators, and a radar array.
Eventually, the Fitzgerald lost both radars and was sailing blind.
To make matters worse, the ship was listing to one side and taking on heavy water, more than the two bilge pumps could remove.

Throughout the developing storm, the Fitzgerald communicated with other ships in the area, namely the Anderson and Avafor.
In the late afternoon, the Fitzgerald contacted the Avafor and mentioned that their boat was damaged, naming off the damages and commenting on the dire conditions of the water.

Around 7 PM that evening, the Anderson contacted the Fitzgerald again, noting their location on their radar.
When asked how they were doing, the Fitzgerald responded, “We are holding our own.”
Shortly after, the Anderson lost them on the radar, and no one could contact them.
Unfortunately, the Fitzgerald had quickly sunk, with the crew most likely not realizing the true seriousness of their damage.
The team made no distress call, nor were rescue operations attempted.

A Marine Casualty Report by the United States Coast Guard later determined some factors contributing to the freighter’s sinking.

The Marine Board of Investigation’s Casualty Report found that the freighter had sunk because of a series of factors, including: The load line may have been lower than seasonally appropriate: When a ship is loaded with cargo, it rests on the water at a certain level, referred to as the load line.
Leaking Hatchways: The cargo was always loaded through a top-side hatchway during the load process.
On October 31, routine damage was noted during an inspection and was scheduled for repair after the shipping season.

The Fitzgerald likely took on the water with these contributing factors when the waves broke over their decks.
The extra weight from the water and the cargo probably caused the ship’s bow to dive into a wave wall and take on too much water.
The load likely rushed forward, plowing the bow into the bottom of the lake and disintegrating the ship.

It’s highly likely that the ship snapped in two and sank quickly, which would have made no time for distress calls or rescue operations.
Upon further inspection, it seems that the lifeboats were ripped from their racks, which is why the remains of two lifeboats were found in the wreckage.
The Sinking Was Likely Preventable

The sinking of the Edmund Fitzgerald is often referred to as a “perfect storm” because all of the conditions had to line up for it to happen.

However, a series of preventable errors and bad luck resulted in the ship’s sinking.
At the same time, November is a difficult time for shipping in this area due to the season shift of the polar jet stream.
Approximately 40% of all Great Lakes shipwrecks occurred in November.

The ship needed repairs that were never made, the load line may not have been appropriate for the season, and they were sailing in an area known for its danger.
While the crew did everything they could to save the ship, in the end, it wasn’t enough.

In addition, the mystery of the freighter’s sinking inspired a song by Gordon Lightfoot, which only adds to the legend of this ship.
Links :
Posted by geogarage at 1:08 AM