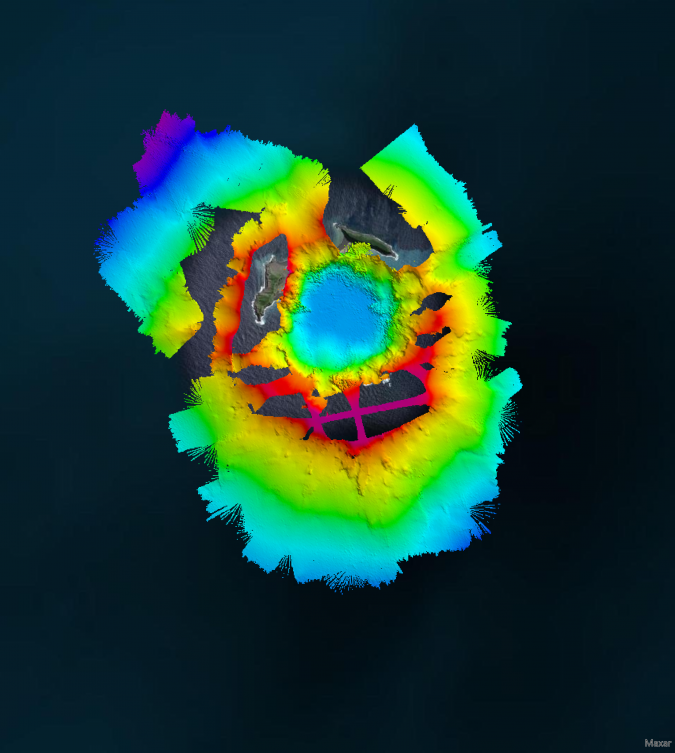 The Tonga Eruption Seabed Mapping Project (TESMaP) is a collaborative mission to discover the undersea impacts of the January 2022 eruption of the Hunga-Tonga Hunga-Ha’apai volcano.
Using their collective knowledge, experience and resources, New Zealand’s National Institute of Water and Atmospheric Research (NIWA) and The Nippon Foundation of Japan hope to understand what happened, how much material was displaced and what shape the volcano was left in.
This information will help to improve tsunami forecasting and better predict the blast effects of subsea volcanoes, which in turn will help to protect people from similar natural disasters in the future.

On 15 January 2022, a South Pacific nation with just over 104,000 residents witnessed the unexpected and unprecedented eruption of the Hunga-Tonga Hunga-Ha’apai (HT–HH) volcano.
The immediate impact had catastrophic consequences for Tonga’s nearby islands.
The main island of Tongatapu was carpeted in toxic ash and a sonic boom travelled around the globe.
The shape of the seabed greatly influenced the speed and size of the resulting tsunami; death and damage were recorded as far away as South America, and waves hit Australia, New Zealand and Japan, even touching the shores of California, Alaska and Chile.
It also severed the submarine fibre-optic cables connecting Tonga with the world, leaving the country in a prolonged blackout.

In April 2022, New Zealand’s National Institute of Water and Atmospheric Research (NIWA) and The Nippon Foundation of Japan announced a collaborative mission to discover the undersea impacts of the explosion, using their collective knowledge, experience and resources to build a detailed and invaluable picture of the eruption’s aftermath below the ocean’s surface.
The Tonga Eruption Seabed Mapping Project (TESMaP) is funded by The Nippon Foundation and supported by The Nippon Foundation-GEBCO Seabed 2030 Project, which aims to map the world’s entire ocean floor by 2030 and to deliver this information via a freely available definitive map.

Around 680 million people currently live in coastal areas, and this figure is expected to increase to one billion in less than 30 years’ time.
These coastal communities face the growing threat of storm surges and tsunamis that can wash away entire neighbourhoods and endanger lives in a matter of minutes.
Since there are numerous similar volcanos around the globe, particularly along the Pacific Ring of Fire, the eruption of HT–HH highlights a critical risk to society, exacerbated by a lack of knowledge.
Through detailed research and surveys, expanding the collective knowledge of the undersea topography is vital to understanding what happened, how much material was displaced and what shape the volcano was left in.
This information makes it possible to improve tsunami forecasting and better predict the blast effects of subsea volcanoes, which in turn will help to protect people from similar natural disasters in the future.

Phase one of TESMaP, which took place between April and May, saw NIWA scientists on board the research vessel RV Tangaroa survey the ocean around HT–HH, covering thousands of square kilometres and collecting video images of the eruption’s impact.
Phase two, which took place between July and August, utilized SEA-KIT International’s 12m uncrewed surface vessel (USV) Maxlimer to conduct a month of further mapping inside the caldera.
This research – conducted in an area which could not be surveyed by NIWA due to safety reasons – will prove crucial to the overall findings of the project. 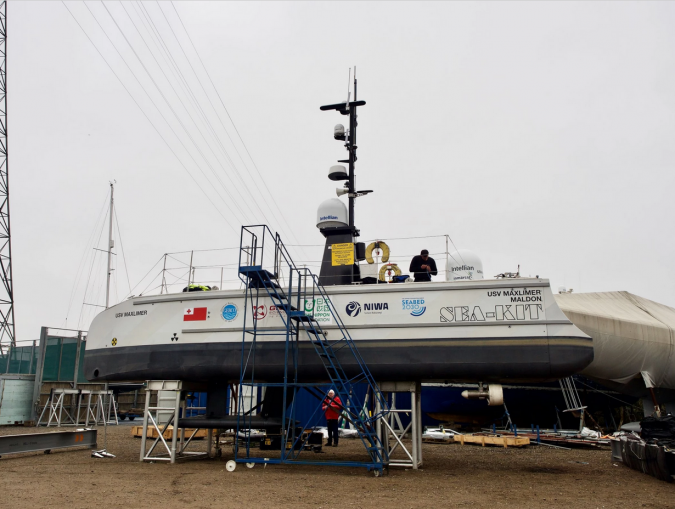 Due to the sheer magnitude of the explosion, dramatic changes to the volcano were to be expected.
But instead, researchers on board RV Tangaroa for the month-long expedition were amazed to find it still largely intact.
NIWA scientists mapped a total of 22,000km2 of the surrounding seafloor and observed changes covering an area of 8,000km2.
They recorded up to seven cubic kilometres of displaced material – enough to fill three million Olympic-sized swimming pools.
Tonga’s severed domestic internet cable was buried under 30m of ash and sediment, and scientists found sandy mud and deep ash ripples as far as 50km away from the volcano.
Ecosystem Impacts

The impacts on the ecosystem were also examined.
The volcano was devoid of biology, but remarkably there were features as close as 15km away that still had abundant and diverse populations of marine life.
Surrounding seamounts had pockets of normal biodiversity, such as corals, sponges, starfish and mussels, indicating the resilience of such marine ecosystems and giving scientists a baseline for monitoring recovery in the future.
Preliminary water column data showed that it is still recovering, with some airborne ash yet to completely settle on the seafloor.
There is also evidence to suggest the volcano may still be erupting, with a dense ash layer found in the upper water column near the site. 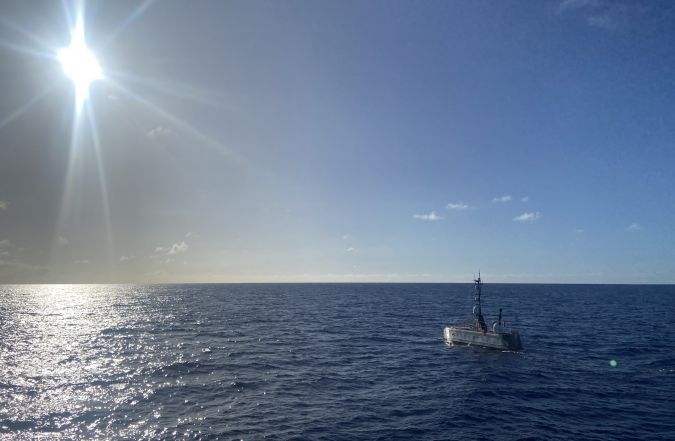 USV Maxlimer in Tonga.
Mapping the Gaps with USV
As part of phase two, USV Maxlimer mapped the current shape of the caldera and measured environmental conditions of the water above it, all whilst being controlled remotely from SEA-KIT’s base in the UK, some 16,000km away.
The use of USV Maxlimer as a configurable platform for a range of sensors provided a unique opportunity to gather data safely and continuously from inside the caldera over a full month.
During the mission, USV Maxlimer used just 100 litres of fuel per day, which is under 2% of the fuel consumption of a typical survey vessel.
In addition to reducing the risk to people, deployment of a USV for survey inside the caldera ensures carbon emissions for the project remain low.

This was the first time that a USV had been used for this type of mission and demonstrated how the technology is pioneering new ways of understanding our oceans.
Maxlimer, the first SEA-KIT X-class USV, is the company’s testing and development vessel.
She was part of the winning Nippon Foundation-GEBCO alumni entry in 2019’s Shell Ocean Discovery XPRIZE and has since achieved numerous ‘firsts’, including the first uncrewed offshore pipeline inspection and first international commercial uncrewed transit in 2019.
The USV also completed 22 days of remote survey operations on Europe’s continental margin in 2020, mapping over 1,000km2 of ocean floor.
Real-time Data Collection

Sensors on board collected bathymetric data, water column backscatter data, sound velocity, conductivity, temperature, turbidity, oxidation reduction, pressure with depth and current data, all of which will develop and support understanding of the eruption’s undersea impact and ongoing activity.
The USV used newly fitted winch capability for sensor dips and tows to gather water column data as far down as 300m and provide a closer look at the suspended sediment layer.
This collection of oceanographic data will help to identify layers of geothermal activity as well as the change in salinity and dissolved particles, and will be used for comparison studies against samples gathered outside the caldera by RV Tangaroa.

Maxlimer, together with three members of the SEA-KIT team, was based in Nuku’alofa, Tonga for around 40 days.
During this time, the vessel was also available for use for environmental surveys ahead of possible new cable lays to reconnect the islands, as well as for the mapping of other volcanoes in the area and generating change maps from previous eruptions. 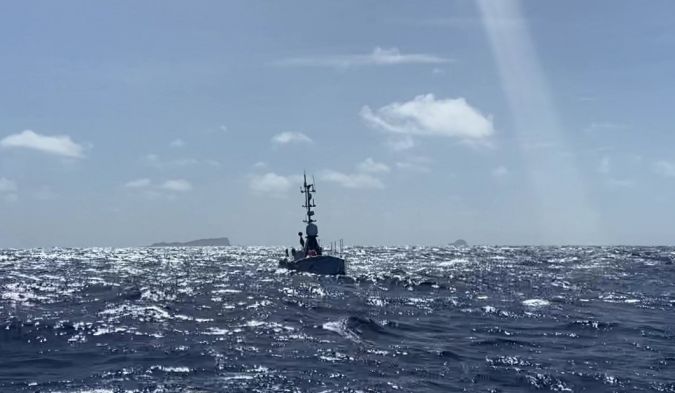 SEA-KIT USV Maxlimer returning from HT-HH caldera in Tonga.
Links :
Posted by geogarage at 1:44 AM