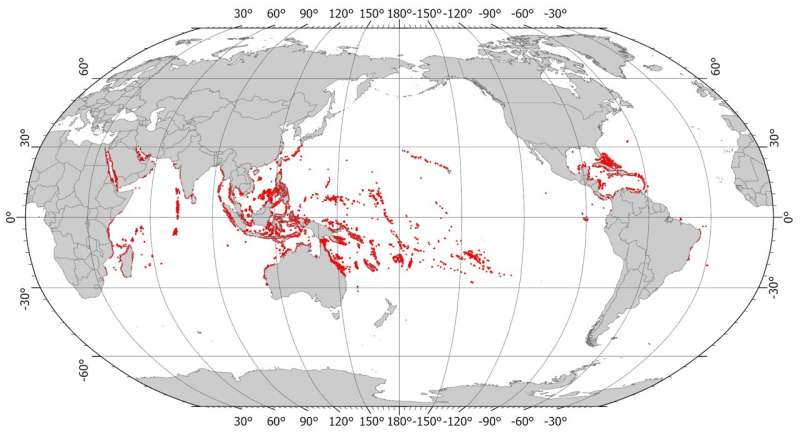 Global coral reef distribution (red dots).
Credit: Millennium Coral Reef Mapping Project/World Atlas of Coral Reefs
From Phys by University of Sydney
Coral reef islands and their reefs—found across in the Indo-Pacific—naturally grow and shrink due to complex biological and physical processes that have yet to be fully understood.
Now, climate change is disrupting them further, leading to new uncertainties for legal maritime zones and small island states.

But it may not be time to panic yet.
A number of technologies and new approaches, coupled with expanded research into coral reef island behavior, may help dispel some of the uncertainties and solidify claims.

A study by University of Sydney researchers, published in Environmental Research Letters, finds that the rules for atolls and coral reefs in international law of the sea—already murky and subject to interpretation due to their shifting nature—will be under greater stress as sea levels rise and ocean acidification disrupts reef integrity.

"It's a perfect storm that is bringing instability and uncertainty to what are already difficult boundaries to determine with any great accuracy," said Dr.
Thomas Fellowes, a postdoctoral research associate at the School of Geosciences of the University of Sydney and lead author of the paper.

"There are geopolitical consequences too.
Coral reef islands are the legal basis for many large maritime zones.
Hence, the climate disruptions we're already seeing—and will see in the decades ahead—may have substantial impact not only for small island states, but in hotly contested boundary disputes in places like the South China Sea." 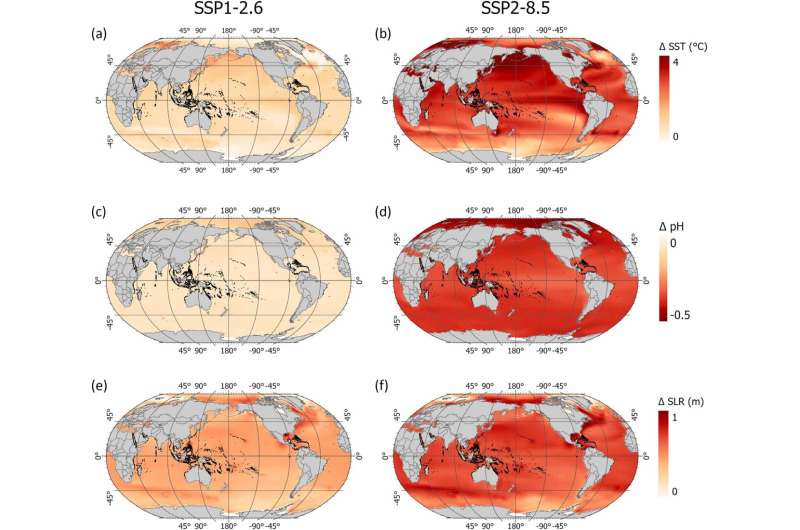 IPCC projections for 2081 to 2100 relative to 1995-2014 under best case scenario (1.5˚C rise, left) and worst case scenario (CO2 emissions double by 2050, right).
Credit: Intergovernmental Panel on Climate Change
This treaty, signed by 167 nations and almost universally recognized, governs everything from territorial seas—up to 12 nautical miles from a coast or low-water line of a reef—to exclusive economic zones of up to 200 nautical miles.
It codifies the rules for freedom of navigation, and allows nations to exploit, conserve and regulate resources in neighboring waters.

"For coral islands, the outer 'low-water line' of the reef is used as the legal baseline to establish maritime zones," said Frances Anggadi, a Ph.D.
student at the University of Sydney Law School.
"The potential loss of maritime zones due to changes in reef baselines from climate change is a serious concern for nations like Kiribati, as well as for larger ones like Australia, who depend on reefs and islands to maintain their claims."

But there is still no clear agreement whether changes to the structural integrity of coral reef islands due to climate will lead to legal vulnerabilities.
"They may not, and that's what many Pacific island countries believe.
What's clear is that a more detailed understanding of coral reef island behavior is needed, along with rethinking of the legal rules."

Dr. Fellowes added that "coral reefs are vulnerable, only thriving within a specific range of biophysical, ocean and climate conditions.
But changes in sedimentation due to climate change may support coral islands and strengthen some maritime claims.
It's not entirely clear that there will only be losers." 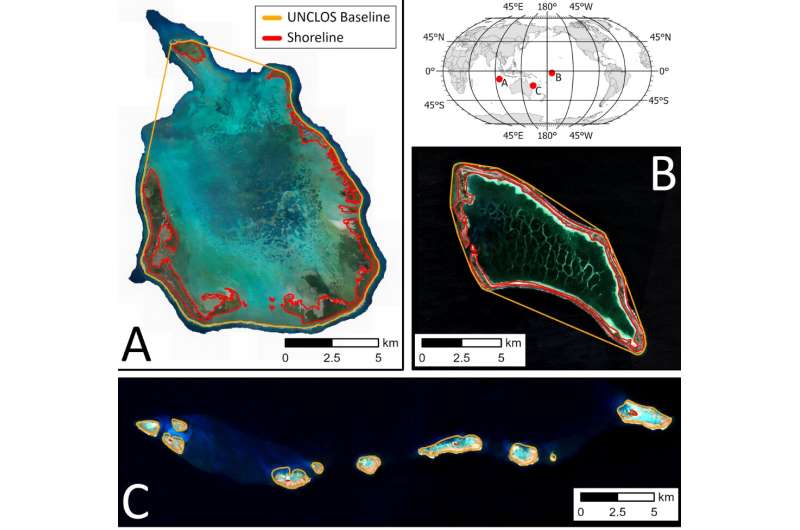 Another is to better understand how climate change will affect island habitability, since sustaining human habitation or economic life in a location is another way to establish a viable claim under the treaty.

But for these approaches to work, more data on each coral reef island system is needed in order to more accurately delineate the true scope of existing claims, how resilient those claims have been so far, and to better understand what aspects of climate change might affect them in the future.

There are four ways in which climate change is disrupting coral reef systems in ways that may affect maritime boundaries: sea-level rise, warming oceans, ocean acidification and increased storminess.

Each has an impact on the interconnected biophysical processes that allow the creation, retreat and overall structural stability of coral reefs and islands.

Cross-section of coral reef geomorphic zones, showing wave energy gradients, sedimentary features (islands, sand aprons and lagoons) and UNCLOS baselines.
Credit: Vila-Concejo and Kench
For example, higher temperatures trigger the expulsion of algal symbionts in corals and other invertebrates (like giant clams), leading to coral bleaching, which—if enough coral organisms die—can result in reef collapse.
In the decades ahead, this could lead to a shrinkage of the outer low-water line of the reef, reducing the basis for a maritime claim.

Oceans acidify as they absorb more and more carbon dioxide, reducing their mineral saturation and making it harder for corals to form.
Reef building species like Acropora—a small polyp that is common in tropical reefs—begin to change their skeletal structures to rely on less carbonate mineral, imperiling overall reef integrity.

As the reefs grow and expand, they become either fringing, barrier or atoll reefs.
Fringing reefs are the most common, projecting seaward from the shore, forming borders along shorelines and surrounding islands.
Barrier reefs do this at greater distance, separated from land by a lagoon of often deep water.
If a volcanic island sinks below sea level and its reef coral continues to grow, an atoll forms.