Swarms of satellites are tracking illegal fishing and logging

This GFW’s map reveals where and when thousands of vessels are involved in close encounters at sea.

From Wired by Jonathan O'Callaghan
In some of the world’s most inaccessible places, tiny satellites are watching—and listening—for signs of destruction.

FISHING BOATS KEPT washing up in Japan with dead North Koreans on board.
Dozens were documented every year, but they spiked in 2017, with more than 100 boats found on the northern coasts of Japan.
No one could explain the appearance of these ghost ships.
Why were there so many?

An answer arrived in 2020.
Using a swarm of satellites orbiting Earth, a nonprofit organization called Global Fishing Watch in Washington, DC, found that China was fishing illegally in North Korean waters, “in contravention of Chinese and North Korean laws, as well as UN sanctions on North Korea,” says Paul Woods, the organization’s cofounder and chief innovation officer.
As a result, North Korean fishermen were having to travel further afield, as far as Russia, something their small ships weren’t suited for.
“They couldn’t get back,” says Woods.
China, caught out, promptly halted its activities.

The alarming discovery was made possible by the DC-based firm Spire Global, which operates more than 100 small satellites in Earth orbit.
These are designed to pick up the radio pings sent out by boats across the globe, which are primarily used by vessels to avoid each other on the seas.
Listening out for them is also a useful way to track illegal maritime activity.

“The way they move when they’re fishing is distinct,” says Woods of the boats.
“We can predict what kind of fishing gear they’re using by their speed, direction, and the way they turn.”
Of the 60,000 vessels that emit such pings, Woods says 5,000 have been found conducting illegal activities thanks to Spire, including fishing at restricted times or offloading hauls of protected fish to other vessels to avoid checks at ports.

Satellite constellations like Spire’s have seen huge growth in recent years, and novel uses like this are becoming more common.
Where once satellites would be large, bulky machines costing tens of millions of dollars, technological advances mean smaller, toaster-sized ones can now be launched at a fraction of the cost.
Flying these together in groups, or constellations, to conduct unique assignments has become an affordable prospect.
“It’s now economically viable to deploy many, many more satellites,” says Joel Spark, cofounder and a general manager at Spire.

Before 2018, no constellations of more than 100 active satellites had ever been launched into Earth orbit, says Jonathan McDowell, a satellite expert at the Harvard-Smithsonian Center for Astrophysics in the US.
Now there are three, with nearly 20 more constellations in the process of being launched and some 200 more in development.
It is a “boom in constellations,” says McDowell.

The reasons for flying constellations are numerous.
The most notorious is to beam the internet to remote locations, made famous by SpaceX’s Starlink mega-constellation.
This vast swarm of 3,000 satellites accounts for nearly half of all those in orbit, and it will swell further to 12,000 or more.
Others, like Amazon, have plans for vast space internet constellations of their own.
Many are worried about launching so many satellites into orbit, significantly raising the risk of collisions and producing dangerous space junk. 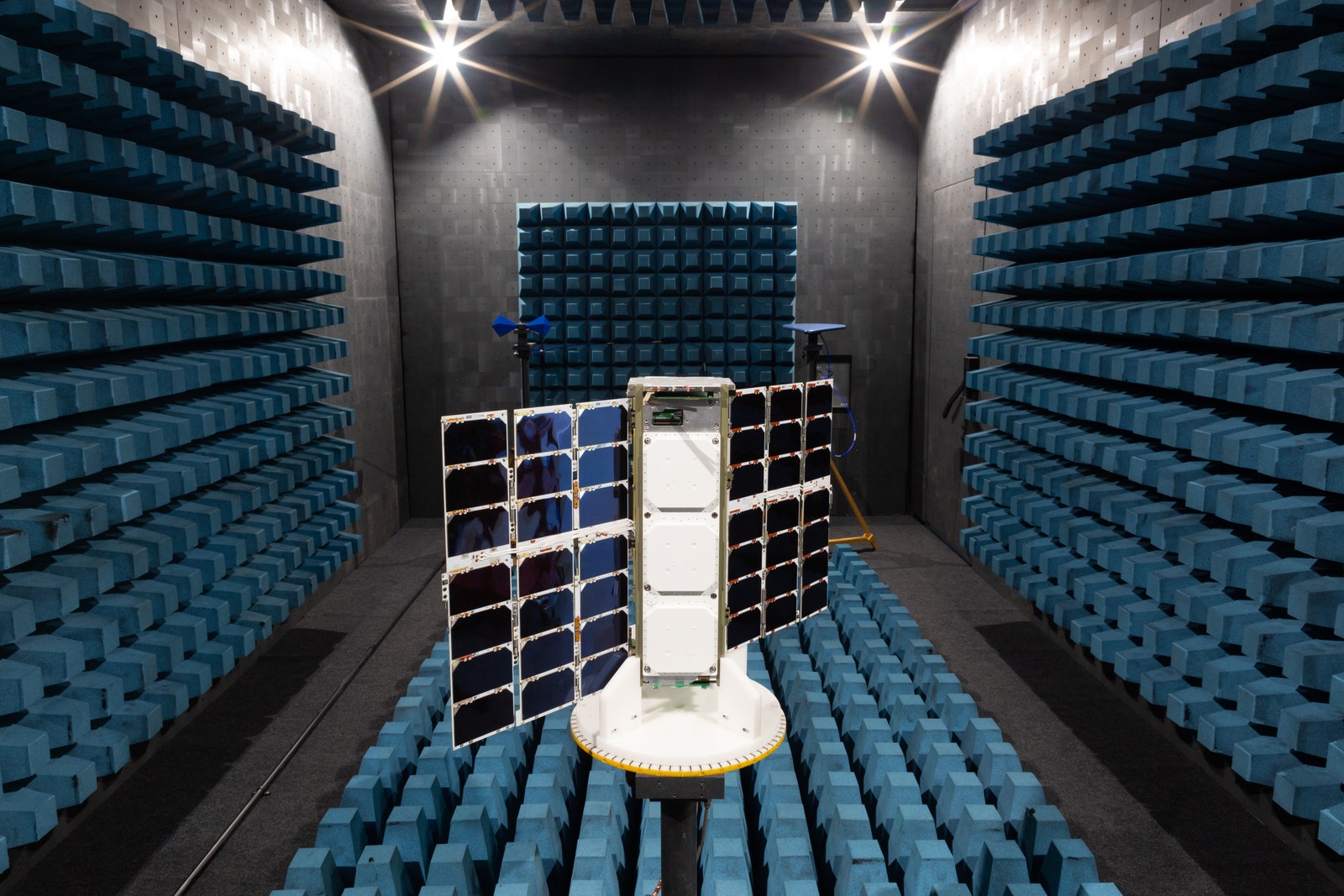 Smaller satellite constellations have their problems too.
Many of their satellites lack the ability to maneuver, for example, to avoid a collision.
“I’m a little uncomfortable with it,” says McDowell, although their small size means most fall back into our atmosphere within a few years, naturally clearing the skies.
For now we can cope, but stricter regulation will be needed in the future as more are launched.

Satellite constellations can encompass the globe, providing valuable data that single satellites cannot.
Some can track illegal methane emissions, others can provide useful communications networks, and others still can provide constant imagery of our planet’s surface.
“I definitely did not expect the diversity of use cases,” says Sara Spangelo, cofounder and CEO of Swarm Technologies in California, whose own constellation of 160 satellites allows small packets of data to be sent between devices around the globe, even from remote locations, creating a worldwide internet of things.

One organization—Rainforest Connection, based in Texas—has found a particularly novel way of using Swarm’s satellites: tracking illegal logging and poaching in more than 32 countries.
In areas where loggers or poachers might operate, Rainforest places solar-powered acoustic sensors called Guardians high in treetops, designed to blend in with the tree from the ground.
If the sensors pick up the sound of illegal activity up to 1.5 kilometers away (assessed by software on board the Guardians), such as chain saws or gunshots, they send a signal to one of Swarm’s satellites overhead, which relays the information back to a ground station.

This allows Rainforest Connection to alert law enforcement or locals to illegal activity, from villages in Sumatra to lands that are home to Indigenous tribes in Brazil.
“In countries like Brazil and Malaysia, deforestation contributes to over 70 percent of their total greenhouse gas emissions,” says Bourhan Yassin, Rainforest’s CEO.
“It’s a very large problem.”

Prior to working with Swarm, Rainforest relied on cellular networks to transmit data.
While quicker, that limited its monitoring to regions near populated areas.
“With Swarm, we can put the devices anywhere we want,” says Yassin.
“It’s doubled up the capability we can do.”

Gai Jorayev at University College London’s Institute of Archaeology, meanwhile, is using imagery from a constellation of more than 200 satellites run by the California firm Planet Labs to track Russia’s shelling of archaeological sites in Ukraine.
Planet’s satellites take images of the entire Earth every day.
This has enabled Jorayev, working with the Global Heritage Fund in California, to find that more than 165 sites have been damaged or destroyed by Russian shelling.

“Almost everywhere I look, I’m surprised by the levels of damage,” says Jorayev.
“I did not expect it at this scale.
The damage is very, very bad.”

Planet has provided its imagery free of charge to Jorayev and his team.
“I’m exceptionally grateful,” says Jorayev.
The hope is that Russia can be held accountable for its actions in future.
That, however, “is a long process,” he says.

These are just a handful of ways satellite constellations are being used today: Spire says it has more than 700 customers, Planet also 700, and Swarm about 300.
Concerns about collisions and the satellites’ potential to create space junk are well founded, but if we can find ways to adequately supervise these constellations, there are many ways they can prove useful.

“There are important roles that large constellations can play,” says McDowell.
“It’s a question of managing it, and not having it be a free-for-all.”
Links :
Posted by geogarage at 1:28 AM