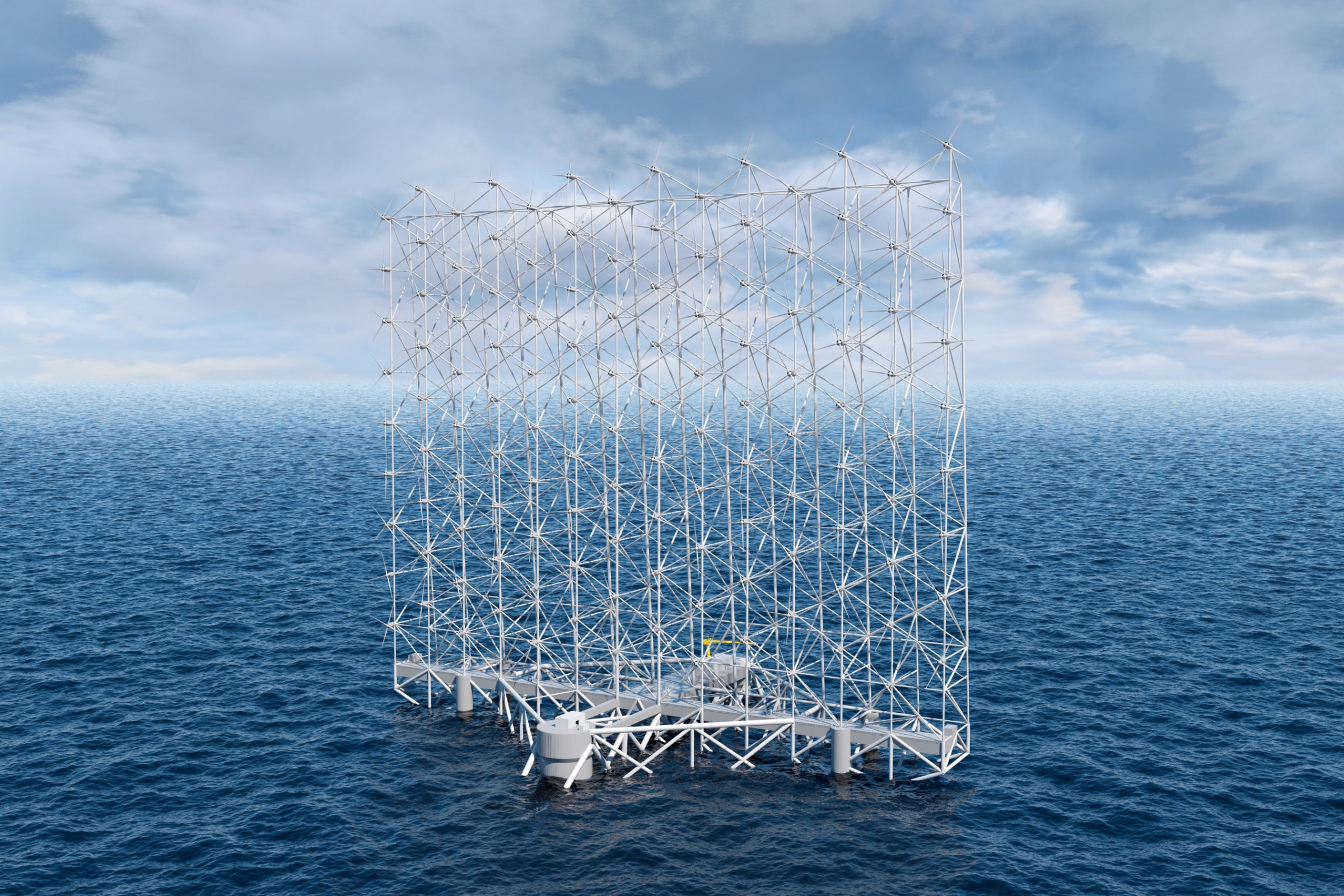 Courtesy of Wind Catching Systems
From Wired by Chris Baraniuk

There’s huge potential to generate renewable energy far out in the ocean.
But designing turbines that can survive rough waters isn’t exactly a breeze.

The makers of wind turbines have, for many decades now, labored to harness one of the mightiest forces in nature.
They’ve moved from onshore to offshore sites, building ever larger rotors with huge blades, each one now longer than a row of 10 London buses.
And they’ve stacked those rotors atop dizzying towers, constantly reaching for new, blustery heights.

In their endless quest to capture the most reliably energetic winds, engineers are now moving further out into the ocean, to areas of deeper water where especially strong winds are known to blow.
For offshore wind turbines—whose fixed-bottom foundations can only extend down 60 meters—such areas have long been off-limits.
But a new generation of floating machines looks set to change that.

The potential bounty is huge.
According to industry body Wind Europe, 80 percent of the offshore wind resource in European waters is in places too deep to make today’s fixed-bottom turbines an economically sensible choice.
Deep water has also prevented the installation of large offshore wind farms off the western coast of the US, for example.

Floating turbines could open up vast swathes of ocean to electricity generation.
But various floating turbine designs are competing over cost and efficiency.
It’s time to begin hunting for a winner, given the many billions of dollars currently being invested in the floating offshore wind industry and the war in Ukraine potentially hastening the move away from fossil fuels.

There’s also added pressure because, despite record offshore wind installations in 2021, the industry is falling short of what’s needed in order to limit climate change, according to a new report from the Global Wind Energy Council (GWEC).

The council states that floating wind is “one of the key game-changers” in the industry.
However, the special engineering challenges of placing wind turbines on floating platforms, where they must contend with the raw forces of stormy seas and unpredictable weather, have prompted a surprising variety of potential solutions.

Take Norwegian firm Wind Catching Systems (WCS).
Staff there have spent five years working on their design for a giant waffle-shaped frame adorned with no fewer than 126 four-rotor wind turbines—like a giant Connect 4 set studded with spinning blades.
The whole structure, standing as tall as the Eiffel Tower, would perch atop a floating platform, akin to the ones used by oil rigs.

Norway intends to install 30 GW of offshore wind by 2040.
That would take between 1,500 and 2,000 floating platforms if each one carried a single traditional-style turbine.
“We could do it with 400,” says Ole Heggheim, the CEO of WCS.
And although the 126 turbines in WCS’s design only have a capacity of 1 MW each, they are placed so closely together that they actually help power one another. 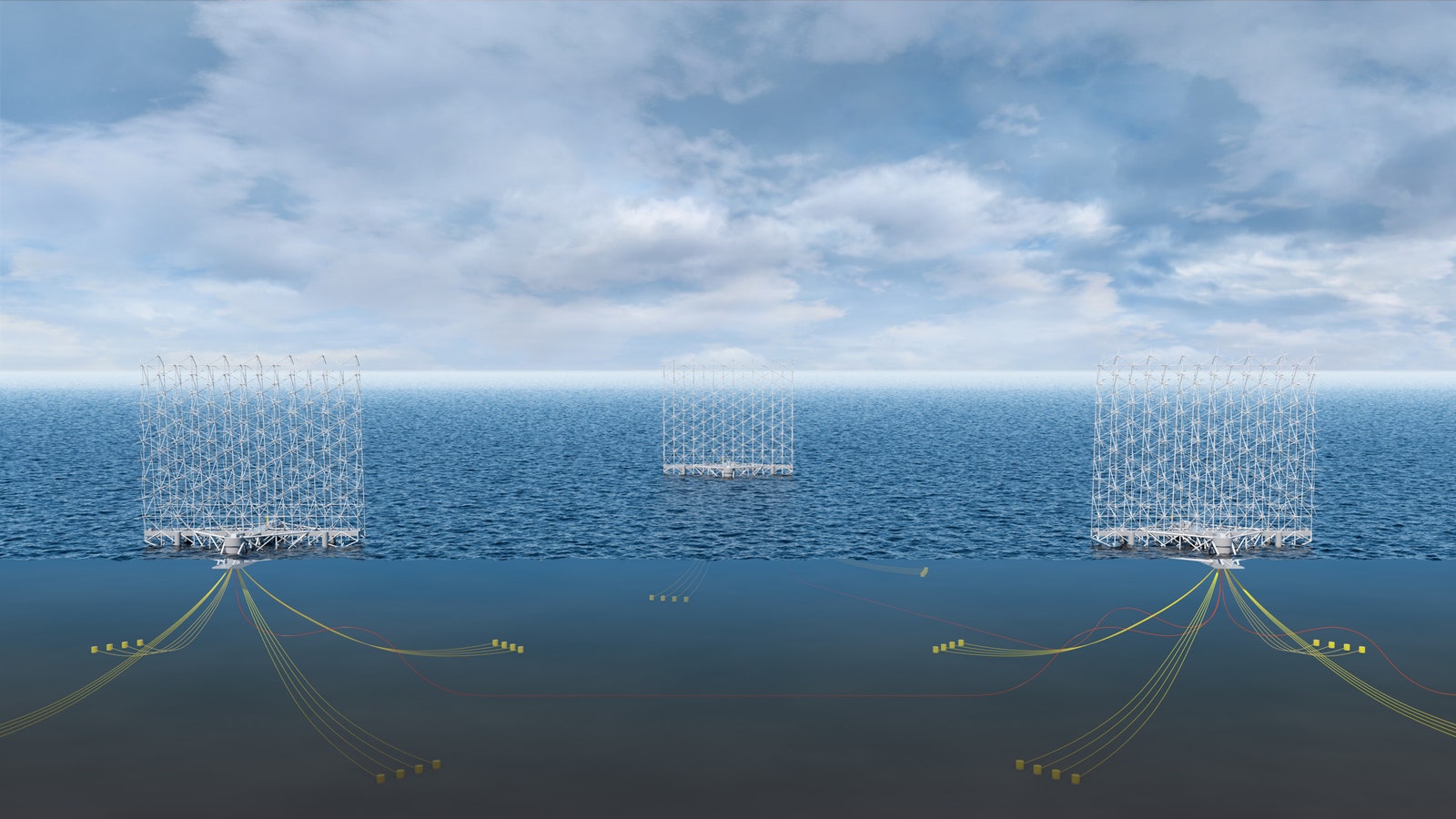 Courtesy of Wind Catching Systems
“It’s an added turbulence bonus that you get from putting these turbines together; it’s like a synergy,” says Heggheim.
In tightly packed multi-rotor systems, the gaps between turbines allow air to flow easily past them, which in turn helps pull more air through the rotors themselves.

Among the other advantages of this design, he adds, is the fact that less cabling would be required to link the multi-rotor floating platforms together.
Individual floating turbines each require a cable of their own, as well as mooring lines to hold them in position.

Other firms are pressing ahead with turbines that look more familiar, though there are many different designs for the floating platforms that will support them at sea.
Equinor, for instance, built the world’s first commercial floating wind farm off the coast of Scotland and put the turbines there—all five of them—on ballasted cylinders called spars.

Now the company is planning to build a much larger floating wind farm with a capacity of 1 GW off the coast of Norway, and it intends to use a different type of platform called the Wind Semi.
This looks a bit like a flat triangle floating in the water, with a turbine sitting on one corner.

This is just the beginning.
A spokesperson for Wind Europe explains that the current capacity of Europe’s first few floating wind farms (113 MW) is expected to triple in just two years.
By 2030, you can expect to see 10 GW installed around the continent—close to 100 times the current capacity and enough to power around 10 million homes.
In the US, one firm has proposed building a floating wind farm with up to 2 GW of capacity off the West Coast.

“We’re coming to a new age,” says Seamus Garvey at the University of Nottingham, who has designed yet another type of floating wind turbine called TetraFloat.
It looks a bit like a triangular pyramid leaning sharply to one side, with a rotor at the apex.

But there are too many competing designs at the moment, he says: “A plethora of solutions is not necessarily a good route to lowering cost.” The concepts that rely on as little steel as possible, he suggests, might have the best chance of success.

As this technology develops, he says we might see the introduction of “body yawing” floating turbines.
These are turbines that are able to swivel on the sea surface in order to orient themselves better and catch the full force of the wind.
Existing onshore and offshore turbines can rotate the machine housing at the top of their towers, the nacelle, to do this.
But if you want to significantly lower the cost of a floating turbine, you’ll likely have to move away from the tall tower concept to alternative designs that require less steel.
Then you can do away with the mechanism that rotates the nacelle and have a simple, cheap-to-build turbine where the entire structure rotates to face the wind instead.

“It’s not clear to me which is going to be the winner,” says Alasdair McDonald at the University of Edinburgh, broadly referring to the various floating designs now emerging.

Durability is going to be key, though, if floating turbines are to survive in the squally waters currently earmarked for them.
“These are incredibly hostile places,” says McDonald.
“You are trying to engineer against the forces of God, almost.”

Thanks to this, it likely won’t be possible to access floating turbines for maintenance works as frequently or as easily as with fixed-bottom machines.
In some cases, companies will have to tow their turbines to a port in order to carry out repairs.

And then there’s the cabling.
It will likely be longer, bigger, and go deeper than the cabling for existing offshore wind farms.
The heavy duty lines will also have to be robust enough to require minimal maintenance over their lifetime.
All of this is “really challenging,” says McDonald.

Assuming all the engineering hurdles can be overcome, there’s still the question of how these gigantic offshore installations will affect wildlife and ocean ecosystems.
One study, published in April, considered various possible risks to marine life from the floating wind farms of the near future.
Among those risks were the potential for animals to become entangled in the cabling or for birds to die when they collide with fast-spinning rotors, already a known issue for some on- and offshore wind farms.

“While I think, yes, we should move quickly, we have to think carefully about how we do it,” says lead author Sara Maxwell at the University of Washington.

She and her coauthors estimate that entanglement with cables won’t be a major issue, largely due to the sheer diameter of the cables expected to connect these structures out at sea.
But the authors rated the risk of collisions with vessels installing and servicing the wind farms as “high” and the risk of birds flying into turbines as “moderate.”
On the flip side, erecting floating turbines should be much quieter than installing fixed-bottom offshore machines, and therefore perhaps less disturbing to marine mammals, since pile-driving for the foundations would no longer be required.

Ultimately, the technology is so new that no one can be sure of the effects it will have on wildlife, says Maxwell.
But she recommends extensive monitoring of new floating wind farms to collect data on their ecological impacts.

There’s little doubt that thousands of floating turbines are on their way.
The better-than-expected economics of renewable energy have more or less ensured that.
But there are still plenty of “open questions” about exactly how floating wind farms will work and how we’ll run them, says McDonald.
The race is on to answer those—and fast.
Links :
Posted by geogarage at 1:33 AM