Apple plans to add satellite features to iPhones for emergencies

Emergency service, even without service. iPhone 14 and iPhone 14 Pro let you text emergency services via satellite when cell service or Wi-Fi are unavailable.
MacRumors : What You Need to Know About Apple's Emergency Satellite Feature for iPhone 14

From Bloomberg by Mark Gurman
Apple Inc.’s push to bring satellite capabilities to the iPhone will be focused on emergency situations, allowing users to send texts to first responders and report crashes in areas without cellular coverage. 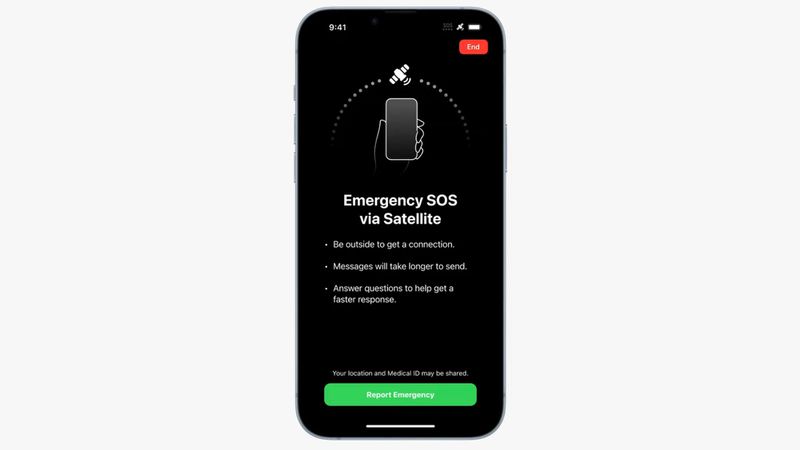 The company is developing at least two related emergency features that will rely on satellite networks, aiming to release them in future iPhones, according to a person with knowledge of the situation.

Apple has been working on satellite technology for years, with a team exploring the concept since at least 2017, Bloomberg has reported.
Speculation that the next iPhone will have satellite capabilities ramped up this week after TF International Securities analyst Ming-Chi Kuo said the phone will probably work with spectrum owned by Globalstar Inc.

That’s led to conjecture that the iPhone will become something akin to a satellite phone, freeing users from having to rely on cell networks.
But Apple’s plan is initially more limited in scope, according to the person, with the focus on helping customers handle crisis scenarios.

And though the next iPhone could have the hardware needed for satellite communications, the features are unlikely to be ready before next year, said another person, who asked not to be identified because the plans aren’t yet public.
The features could also change or be scrapped before they’re released.

The first component, dubbed Emergency Message via Satellite, will let users text emergency services and contacts over a satellite network when there’s no cell signal available.
That feature will be integrated into the Messages app as a third protocol -- alongside the standard SMS and iMessage -- and appear with gray message bubbles instead of green or blue.
The second feature will be a tool to report major emergencies, such as plane crashes and sinking ships, also using satellite networks.

The texting-via-satellite tool, codenamed Stewie inside Apple, will restrict messages to a shorter length.
The texts will automatically push through to an emergency contact’s phone, even if the do-not-disturb setting is on.
One planned design will let a user send the message by typing “Emergency SOS” where they would usually input a contact name.
In addition to delivering texts, the service may eventually be able to handle some phone calls too.

Such an option will be useful in areas such as mountains or remote lakes, where 4G or 5G coverage may be unavailable.
As part of its broader efforts, Apple has even considered eventually deploying its own satellites, but this feature is likely to rely on existing networks.

The second emergency feature is focused on letting users report a crisis.
The phone will ask what kind of emergency is happening, such as whether it involves a car, boat, plane or fire.

The system is also able to take more specific information, such as a person falling overboard or a ship sinking.
It will ask a user if search and rescue services are needed, if there is suspicious behavior or weapons involved, and if a person has suffered a traumatic injury.

When reaching emergency services, the feature can send a user’s location and Medical ID, a virtual card in the Health app with a list of a user’s medical history, age, medications, and information like height and weight.
It can also a notify a user’s emergency contacts, typically a person’s family, friends or doctors.

It’s unclear which emergency services or providers the system would tap into.
The set of features would compete with the Garmin inReach device, which lets users send short messages or an SOS over satellite networks.

Both features are, of course, dependent on satellite availability and local regulations.
They’re not designed to work in every country, and Apple has created a mechanism that will ask users to be outdoors and walk in a certain direction to help the iPhone connect to a satellite.
Linking to a network also won’t always be instantaneous, with testing of the feature indicating that it could sometimes take up to one minute to work.

To connect to satellites, Apple will need a special chip.
While the company is developing its own custom cellular modems for use in the coming years, it still plans to rely on a Qualcomm Inc. modem in the near term.

Speculation that the next iPhone will have satellite capabilities sent shares of Globalstar soaring 64% on Monday.
That company previously said it had signed an agreement with an unidentified party to develop a new service -- a disclosure that some now believe is evidence that it’s Apple’s partner.

Apple isn’t teaming up with Globalstar rival Iridium Communications Inc. on the effort, people familiar with matter said.
And Omnispace LLC, another satellite company, hasn’t yet committed to building systems that could support such services, said industry analyst Tim Farrar.

Globalstar gave up some of its gains on Tuesday and was down 12% as the market opened in New York.
Iridium was down 6.2% while and Apple was down less than 1%.

Apple plans to debut its latest iPhones as early as the middle of next month.
Beyond the possible satellite functionality, the company plans to include a narrower display cutout with an updated Face ID system and a faster processor.
The new model also will have significant camera hardware and software upgrades.
Links :
Posted by geogarage at 9:05 AM