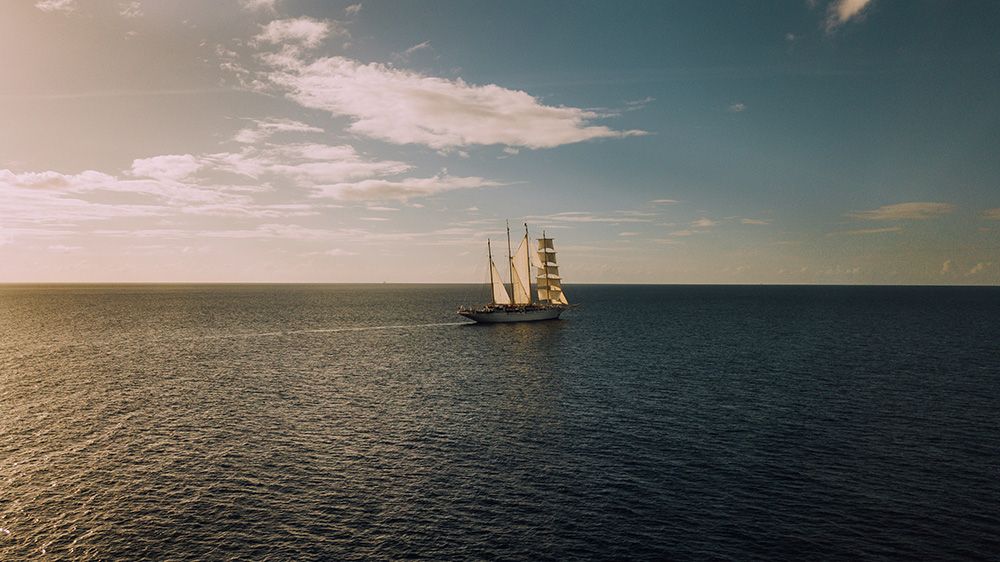 Understanding the Ocean's history N: “Our oceans are radically changing due to human
impact.
It is our goal to show how knowledge about the sea is produced,” says Historian of Ideas Ellen Krefting.
Photo: Drew Darby/Unsplash
From Oslo Univ by Ellen Krefting

Nautical charts have played an important role in providing us with knowledge of the world’s oceans.
They have also framed the ideas we could have about the ocean, including issues relating to the climate and sustainability.

An article published by the Norwegian newspaper Aftenposten in May provides a visual portrayal of the maritime boundaries of the Arctic region.
Nobody owns the Arctic, but several nations including China and the USA want to exploit the vast resources there and to sail through it, as the ice melts and new shipping lanes open.

The map published by Aftenposten showed the Arctic both now and what it might look like when the ice has melted.

According to Ellen Marie Krefting, Professor of History of Ideas at the University of Oslo, the article falls in line with a tradition dating back several hundred years.
“Charts have been handmade, printed and used as a symbol of power, territory and to define those resources found beneath the surface. And, of course, for navigation. The format for nautical charts has remained the same since the 17th century, even though the technology has developed,” she says.

Carta Marina
“It’s important to understand the history”
“Other formats of knowledge are models and records that have helped us understand the oceans,” Krefting continues.
“The ocean is vast, inaccessible and difficult to understand.This has prompted the development of technologies and other aids. But how did these aids develop? What opportunities have they provided for us to be aware of environmental protection? And how have they limited us?”

BLUE HUMANITIES: “We believe that we are in control of the ocean, and that all we need is knowledge and the technology.” Ellen Kreftingquestions general understandings of the ocean.

These are questions studied by Ellen Krefting and her colleagues on the project entitled Maritime modernities, which they started in 2021.
In the project, humanities researchers are studying how knowledge of the oceans has been produced and established since the 17th century and up to the present day.
“One fundamental belief in my discipline is that if we understand history, it will be easier to understand our current position and what brought us here,” says Krefting.
She also believes that such an approach can help us find a new direction, if necessary.
According to her, this might well be the case today.
Unlimited resources?

“Our modern mindset is that the oceans are in principle an unlimited resource, and that we just have to keep finding new ways of exploiting it as efficiently as possible. We’ve always focused on growth, and now we are even talking about sustainable growth,” she points out.

She believes that, for a long time now, the oceans have been a blind spot in discussions of the “Anthropocene” epoch, in which we study our era as a geological epoch shaped by human impact.
In other words: Our discussions have focused more on overexploitation of life on land than in the sea.

“But our oceans are radically changing due to human impact.
It is our goal to show how knowledge about the sea is produced and the formats we have used to understand the oceans all play a role.”

Krefting believes that overexploitation of resources is based on a mindset that has mainly evolved over the past 200 to 250 years.
“People started to challenge this mindset, however, during the post-war period.
This was when we began to take a critical view of the population growth on our planet and started to talk about the environment, ecology, and the need for regulation. At that time, we thought this was a new concept.”
Regulation of the seas in the 17th century

This was not true, however.
As an expert in 17th and 18th century history, Krefting has extensive knowledge of Early Modern French maritime law.
During this period, France was a superpower and a nation very fond of creating legislation for most aspects of life, including the seas.
“At the end of the 17th century, the French government attempted to establish the oceans as a space that could be regulated,” she explains.

Jean-Baptiste Colbert, Minister of Finance under King Louis XIV prepared legislation to govern lakes and forests, oceans and use of the seas.
A major piece of legislation was introduced in 1682, the so-called marine ordinance.
“The ordinance stated that all marine resources were to be regulated, be it seaweed, shipwrecks, fish or amber.”
Local experience is underestimated

One important principle in the French legislation was to preserve resources for future generations.

“I believe that the way our 17th century ancestors understood that nature was under threat was more local and based on experience. As society became more globalised and scientific, the people in power started to underestimate local experience. This is still evident today,” says Ellen Krefting, and continues: “Today, we only trust knowledge when it is at a generalised scientific level. As such, we underestimate the experience of local fishermen and local communities.”
She also believes that this is reflected in the slogan for the UN’s Ocean Decade, which started in 2021: “The Science We Need for the Ocean We Want”.

The objective is for all nations of the world to mobilise to develop the science we need to ensure the ocean we want.
“I find this slogan interesting because it implies that the ocean we want is something we can create.
We believe that we are in control of this, and that all we need is knowledge and the technology.”
Questioning the obvious

Charts, models and records, such as nautical logs and catch reports, have been key in providing knowledge of the oceans.
However, they have also delimited our knowledge and demarcated what type of knowledge and ideas we can have,” says Ellen Krefting.
“We may feel that these aids are completely obvious, natural and self-evident – of course we will be making charts, of the ice edge, for example! And of sea levels, seabeds, ocean currents and fish stocks.
We use charts and maps for many different kinds of knowledge about the oceans,” she says.

But how did maps and charts actually become such an important and impervious knowledge format? And what about the models, from miniature ships to mathematical models and interpretations of the seabed in three-dimensional shoeboxes?
How did they become so important?
“These formats provide a way of organising a vast amount of knowledge of the oceans, and have done so to an ever-increasing extent over a 400-year period, based on a constantly growing volume of data.
In my discipline, one instinct is to question knowledge that we feel is obvious,” says Krefting, elaborating:
“We are unwinding these knowledge formats not only because they shape the way we view the oceans, but also the way we use our minds.
Perhaps our views of resource exploitation are interlinked with the way we organised our knowledge.”
The rise of the “Blue Humanities”

Traditionally, research into the oceans has been performed by natural scientists.
In more recent years, however, literary scientists, anthropologists, historians and media scientists have also embarked on this research, resulting in the emergence of what is known as the Blue Humanities.

As such, there has been a shift of focus within several Humanities from the land to the sea.
Krefting’s research is a part of this shift.
She believes that the research may be instrumental in increasing our understanding of the oceans’ history – and that this will provide us with new perspectives as we plot out our future.

“Humankind was not born with maps. This is technology we have developed. But it has become so integral and important that we cannot imagine life without it. This makes it all the more important to study how this emerged, and how it has coloured the way we now understand the world and act accordingly,” she says.
Maps and charts provide information on human interests

Back to the Arctic: Krefting points out that the charts we use to portray the possible conflicts implied by an ice-free Arctic do not show how the increase in shipping will accelerate the ice melt.
Neither do they show how this will affect ecology and the climate.
“No matter how accurate or comprehensive they are, charts will always frame our surroundings in specific ways, for different purposes.
They are as much a portrayal of human interests in this maritime area than of the Arctic Sea itself.”

Krefting believes it is particularly interesting to monitor how the format of the chart affects the way we view an ocean such as the Arctic Sea.
“It was not until 1921 that the Arctic Sea or Arctic Ocean was officially assigned status as an ocean.
Up until the Second World War, the belief was that the sea under the ice was practically dead,” she says.

She goes on to explain that this perspective has now changed radically.
“The Arctic today is not just a matter of political and economic dispute, the ocean itself now plays a key role for the ecology and climate.The Arctic Ocean is changing faster than perhaps any other ocean in the world, with different consequence scenarios. This has given rise to a charting bonanza: Never before have we drawn as many different charts of the Arctic.”
Links :
Posted by geogarage at 1:09 AM