From WSJ by Peter Cowie
‘Nanook of the North,’ the 1922 film, often considered the first documentary and created by Robert J.
Flaherty, uses a uniquely humanistic lens to depict the life of an Inuit family in their harsh northern landscape

One hundred years ago this summer, Robert J. Flaherty presented “Nanook of the North” to the public in New York.
In the documentary genre, this extraordinary portrayal of an Inuit (at that time called Eskimo) family is as impressive a maiden feature as Orson Welles’s “Citizen Kane” is among fiction films.
Flaherty became, almost overnight, “the father of the documentary film.”
In recent decades, however, “Nanook of the North” has been criticized increasingly for its fabrication of a kind of poetic realism no longer accepted in documentary ethics. 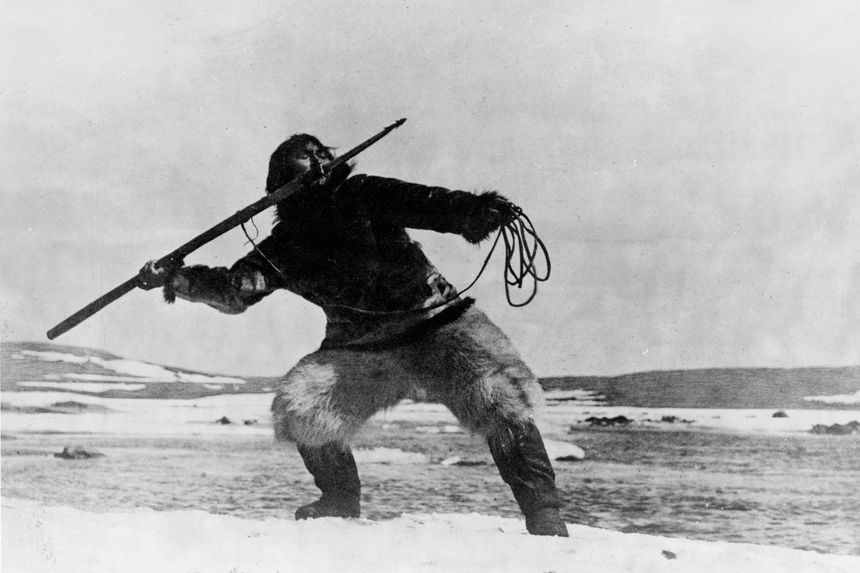 Nanook about to hurl a spear
photo : Corbis via Getty Images
Flaherty in 1910 embarked on the first of a series of path-breaking and perilous explorations on behalf of his employer at the time, the Canadian railroad magnate Sir William Mackenzie.
Fascinated by the everyday life of the Inuit people, Flaherty shot some 30,000 feet of film with his Bell and Howell hand-cranked camera—only to lose the entire negative footage in a fire.
Undaunted, he returned to the Inuit lands in Quebec in 1920.
At that juncture, a mere 300 Inuit hunted “in an area the size of England,” according to the director.
He took equipment to print the film immediately after shooting, and also a projector so that the Inuit could understand and appreciate what he was doing.
Flaherty’s two cameras on the 1920 expedition could pan and tilt more easily—and were lighter—than other cameras.
In temperatures of minus 37 degrees Fahrenheit, however, the film sometimes became so brittle that “it broke into bits,” Flaherty wrote in his workbook, “like so much wafer glass.”

“Nanook of the North” follows the life of the charismatic Nanook through the seasons of Hopewell Sound in Hudson’s Bay, as he hunts, and trades, and protects his family at every turn against the unyielding elements.
A century later, Flaherty’s images of the indigenous people of northern Canada seem far ahead of their time.
The approach is never patronizing.
Nanook and his family evince and dignity as they survive without complaint from one day to another on the vast ice fields, seeking food in the form of white fox, walrus or seal, and building igloos in time to shelter for the night.
The attention to detail is meticulous.
Flaherty observes Nanook killing freshly caught fish with his teeth; cladding a kayak with sealskin; or cutting a piece of ice to form a “window” for his igloo.

Flaherty and his wife, Frances Hubbard Flaherty (who contributed to the production at every stage), realized the importance of creating a narrative, and this they did by staging a series of vivid tableaux—Nanook and his family emerging, one after another, from the interior of a kayak; sharpening their walrus-ivory knives by licking the blade so they freeze instantly as they flense a seal; or breaking up a squabble among the indispensable huskies who drag the sleds and kayaks alike.
The editing sustains this artificial narrative with remarkable skill and a sense of rubato in tune with the Inuit’s indigenous way of life.

Several situations were clearly fabricated, but that in no way diminishes the unadorned authenticity, nor the inherent energy of what goes on within the film frame.
For example, the Inuit had stopped hunting walrus and were using rifles to catch much of their prey.
Because the light inside an igloo was too meagre for the cameras to record on film, Flaherty had Nanook and family build a fake igloo, open to the daylight, so that he could show the Inuit crawling into bed with one another while the husky puppies were tucked into a corner to protect them from the freezing temperatures.

While “Nanook of the North” (subtitled “A Story of Life and Love in the Actual Arctic”) captivated audiences in the U.S., Europe and even Japan, the image of the Inuit as more than just “Noble Savage” served as an antidote to the countless westerns in which the “only good Indian was a dead Indian,” to paraphrase the young Theodore Roosevelt.
The tireless Nanook (meaning “The Bear”), along with his partner, Nyla (“The Smiling One”), wears his heroic image with cheerfulness and pride, although in real life Nanook may have starved to death while hunting in vain for deer (Flaherty’s claim) or succumbed to tuberculosis just two years after Flaherty had completed filming.

The appeal of “Nanook of the North” stems from its humanism.
Nanook comes to embody a way of facing the world, of taking it by the scruff of the neck and wringing existence from it with a laugh.
“Nanook of the North” remains the great begetter of countless nature documentaries, from the work of conservationist Jane Goodall to David Attenborough’s “Green Planet” series.
Decades earlier, Flaherty’s the film confronted man’s struggle to survive in a hostile environment, and did so with the instruments of the cinema more effectively than any work of the period.
A digitally remastered version was released by the Criterion Collection in 1999 and is available on Amazon Prime video.
Links :
Posted by geogarage at 1:07 AM