Rising seas are the next crisis for the world’s ports 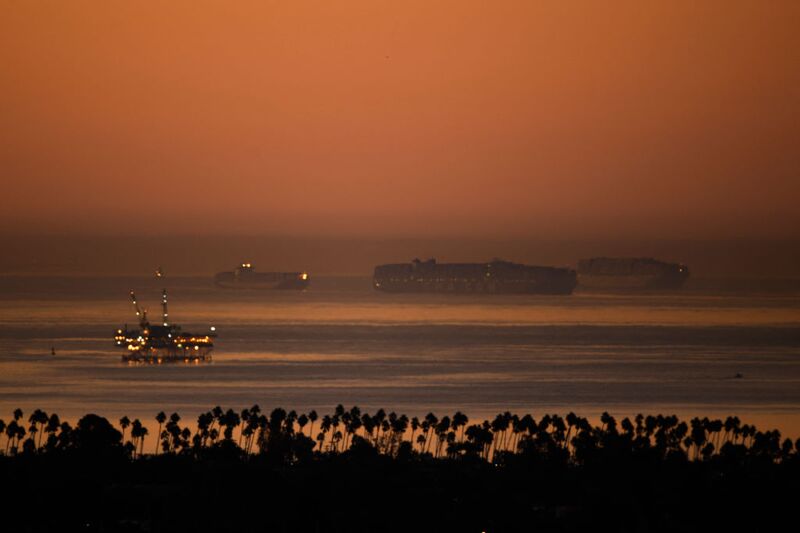 The delicate choreography of ships, trains and trucks at the world’s ports has been badly disrupted by the pandemic, and the turmoil is not likely to end soon.
If a virus can have such an adverse impact on the journey of a plastic toy or automobile from Point A to Point B, consider the potential impact of something even more pervasive and powerful: water.

In the years ahead, sea level rise, more intense storm surge and jacked-up tropical storms will be visiting many of the world’s roughly 3,800 ports.
Most of those ports are coastal; roughly a third are located in a tropical band vulnerable to the most powerful effects of climate change.
“If sea levels rise and storms become stronger as expected in the future due to climate change, the magnitude and costs of these disruptions are expected to grow,” states a report from the Environmental Defense Fund.

Ports cannot easily escape the influence of water.
When extreme rains led to flooding in Itajai, Brazil, in 2017, the floodwaters produced currents strong enough to prevent ships from berthing.
The port was closed for three weeks.
Just as too much water poses a threat, so too does not enough.
Extended drought along Germany’s River Rhine in 2018 lowered the water table and made it impossible for some ships to pass.

“Ports, working waterfronts and coastal infrastructure more generally have a lot of pressures on them from a number of sides,” said Austin Becker, chair of the department of marine affairs at the University of Rhode Island.
“They’re located in highly sensitive environments that are often in estuaries where riverine systems meet the ocean. They’re there because that was a nice way to get cargo from one country to another, and then get it inland through a riverine system.”

Because ports were early tenants of waterfront cities, there is no place to which they can easily retreat from rising seas.
As Becker told me, cities grew up around the ports.
And then the cities pushed the ports further toward the sea.

As cities have enveloped ports, so have the transportation networks that enable goods to travel from the sea inland.
“They need all these other infrastructure connections that have grown around them over the years — rail systems and highway systems and pipelines and that kind of thing,” Becker said.
In most prosperous, or even middling, cities, the land necessary for such systems is long spoken for.
As a result, most train tracks, roadways, warehouses and other infrastructure adjacent to ports will not be moved to higher ground away from the water; they will have to be adapted to manage the rising threat.

Port infrastructure is constantly evolving, noted Philip Orton, a professor of ocean engineering at Stevens Institute of Technology.
Ports are accustomed to incorporating new technologies — and the biggest ports, which have had to evolve to handle the needs of enormous, 1,300-foot-long container ships, tend to be the most flexible.
But the loading and transit areas behind ports are generally less innovative and less resilient.
When storm surge from Hurricane Marie hit Southern California in August 2014, damage to the Port of Long Beach caused shipping operations to halt for several days.
But as a subsequent report noted, it was months before the surrounding roads and facilities were back to normal.

The seas have been rising incrementally for centuries, but the projected rise in this century is markedly different, as are the consequences.
The basic formula is this: Greenhouse gas emissions produce higher temperatures.
Those higher temperatures warm the water, expanding the volume of the seas.
As temperatures rise, ice stored at the poles and elsewhere — including mountain glaciers — melts, further increasing water volume.
It is a powerful feedback loop that will cause the rate of sea rise to increase dramatically as the 21st century progresses.

More than 200 feet of potential global sea rise is currently stored in ice.
According to the United Nations Conference on Trade and Development, the world’s glaciers will lose between 18% and 36% of their ice mass this century.
Meanwhile, the Greenland and Antarctic ice sheets are melting at a faster pace than previously expected.

Millions of years ago, before those ice sheets materialized, water covered far more of the earth than it does now.
The northern rim of the Gulf of Mexico, for example, was not along the beaches of what we now call Alabama and Mississippi.
It was in present-day Illinois.
The Gulf will not be flooding Chicago anytime soon.
But at sea level, one foot of vertical rise can produce about 100 feet of horizontal spread.
In many low places, that translates to a lot of flooding.

Sea level rise will not be consistent across the globe.
But according to US government projections, if the world significantly reduces greenhouse gas emissions, there may be about two feet of rise by 2100.
If it doesn’t, the National Oceanic and Atmospheric Administration notes, average sea level rise for the contiguous US could be more than seven feet.
Ports, like other coastal real estate and infrastructure, are very much in the flood zone.

A paper by a team of researchers at Princeton and Rutgers points to a “preparedness dilemma” in the US.
“While the federal government seeks to protect citizens from natural disasters, it has limited control over efforts to do so,” the researchers write.
“Both the exposure and vulnerability to a coastal hazard are largely shaped by state and local land use and building codes.”

One thing that helps to galvanize political and financial support for resilience upgrades, they say, is a whopping storm:

In one model of the policy process, floods, hurricanes, and other extreme weather events have been viewed as “focusing events,” whereby they refocus the attention of elected officials and publics on an existing problem.
During a focusing event, a “policy window” of opportunity opens for a short period, and advocates emerge, racing to push their preferred solutions through before the window closes.

For the Port Authority of New York and New Jersey, Hurricane Sandy in 2012 was a focusing event.
Sandy shut down most of the port for a week, which resulted in 25,000 shipping containers being diverted to other ports.
Waterways had to be surveyed and cleared.
Some cargo terminals and maritime support facilities were out of commission longer, due to power failures and damaged equipment.
Oil terminals, for example, couldn’t offload product from tankers because they lacked power.
Damages to port authority operations, which include commuter rail, reached an astonishing $2.2 billion.

The Port Authority’s resilience and sustainability efforts after the storm included complex analysis of the port’s future but also some very basic problem solving.
For example, engineers realized that motors for container cranes can be raised higher off the ground to avoid being inundated.

For the most part, cranes, like electrical substations and other vital infrastructure, are not owned by the Port Authority.
So upgrading — which often means elevating — requires coordinated action with various private partners.
Mitigation efforts at U.S. ports, said Austin Becker, will require disparate interests coming together.

Given the central role that ports play in global commerce, however, those interests include more than those of shipping companies and others directly engaged in port activities.
All kinds of businesses and consumers, including the most landlocked, depend on ports.
Yet not all of those ports will prove dependable in the face of the 21st century’s rising waters.
“Thousands of small and medium ports that provide these really essential services to their local economies and local regions don’t have the resources they need and are already working with outdated infrastructure,” Becker said.

Giants such as Long Beach and the Port of New York and New Jersey have the financial power and expertise to ride out the rising seas.
As the water rises, however, hundreds of smaller ports are left hoping their luck doesn’t collide with the next waterborne “focusing event.”
Links :
Posted by geogarage at 1:18 AM