Heat wave: how Orkney is leading a tidal power revolution 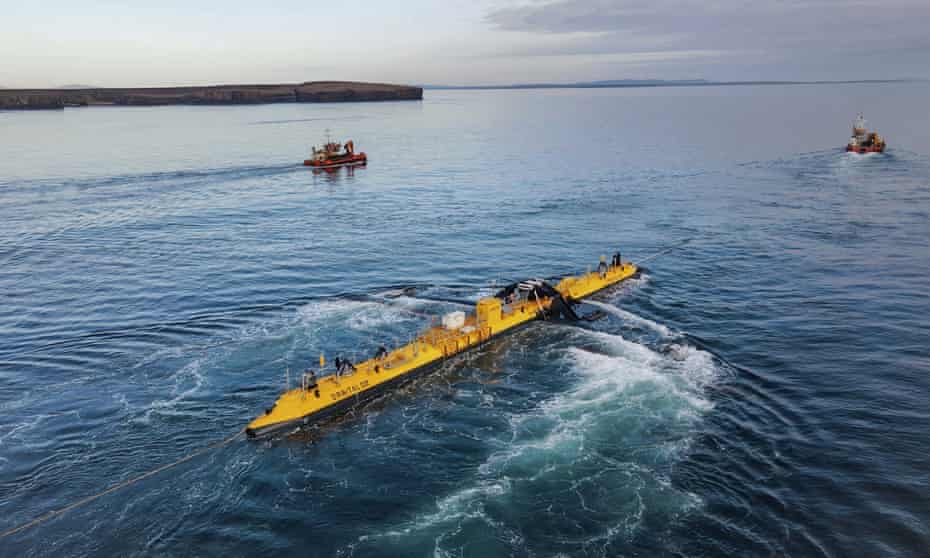 The 74-metre Orbital O2 being towed to the Orkney test site in 2021.
Photograph: Orbital Marine Power
From The Guardian by Eve Livingston
Strong tides make conditions in the Scottish islands ideal, but can the UK grasp the opportunity to become a leader in the sector?

On a small passenger boat about 10 miles north of Kirkwall, Orkney, at the point where the Atlantic Ocean meets the North Sea, an immense yellow structure heaves into view.
This is the world’s most powerful tidal stream energy generator, Orbital Marine Power’s O2.
Its shadow quickly dwarfs the tiny vessel.

Today, the generator’s turbines are raised above sea level for maintenance.
It is difficult to comprehend the O2’s scale until a worker appears, a tiny stick figure against the hulking turbine.

Orkney islands in the North of Scotland with the GeoGarage platform (UKHO nautical raster map)
Orkney, chosen as the European Marine Energy Centre’s (Emec) headquarters for its combination of strong tides and waves as well as connection to the energy grid, has become a hub for tidal power innovation.
Alongside Scottish company Orbital, Spain-based Magallanes is also testing at Emec and US company Aquantis has just signed up to a six-month demo programme. 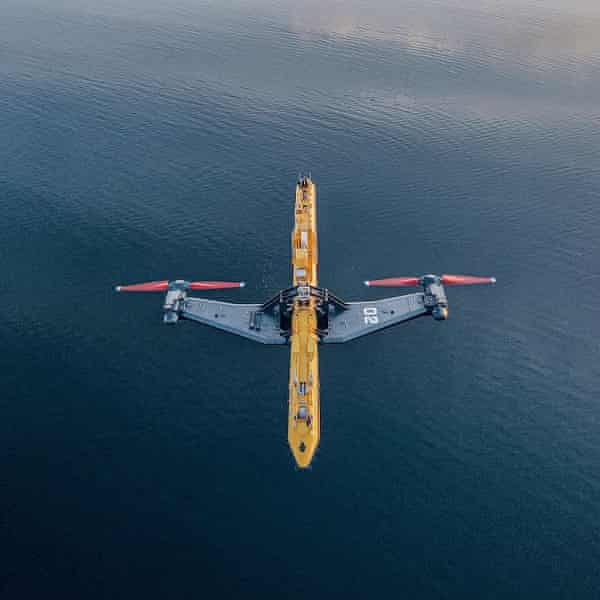 The Orbital O2 at the Emec Fall of Warness test site. Photograph: Orbital Marine Power
Tidal power, while not yet widely commercialised, is seen by many as the next frontier in global renewables.
It’s the only renewable power source that comes from the moon’s pull on the Earth.
“Unlike other renewables which rely on, for instance, the sun or the wind, tidal resources are predictable and continuous,” says Prof AbuBakr Bahaj, head of the energy and climate change division at the University of Southampton.

Harnessing power from the waves can be done in three ways: tidal barrages, in which turbines are attached to a dam-like wall; tidal lagoons, where a body of water is enclosed by a barrage-like barrier; and tidal stream, where turbines are placed directly into fast-flowing bodies of water.

Only tidal barrages are used commercially – most notably at Lake Sihwa in South Korea and La Rance in northern France – but it is tidal stream technology that is being tested in Orkney. Tidal stream is cheaper to build and has less of an environmental impact than barrages, which alter tidal flow and can affect marine life and birds.

Tidal stream power alone could provide 11% of the UK’s current electricity needs, according to 2021 research from Edinburgh University.

Despite its promise, progress has been slow.
Aboard the boat, Lisa MacKenzie from Emec tells a now infamous tale about the UK renewables sector. In the 1980s, Orkney was home to experimental wind turbine technology that could have seen the UK become a global leader in the sector.
But the government didn’t invest – and Denmark and Germany swooped in to monopolise the market.
“Wind energy was the UK’s to lose and we lost it,” she says.
“Now tidal energy is ours to lose. We can’t let that happen again.”

In Orkney, testing is aimed at lowering the costs and risks of tidal power to make it commercially viable.
“We have some of the best conditions in the world to test new technologies,” MacKenzie says.
“More ocean energy converters have been tested here than any other site.”

Orbital’s O2 turbine, deployed to Orkney’s Fall of Warness testing site in July last year, is the third iteration of its tidal technology.
This is the version the company hopes to take to market.
It consists of a 74-metre floating structure with a submerged two-bladed turbine on each side.
A subsea cable connects it to the local onshore electricity grid, where the energy it produces can meet the demands of about 2,000 homes each year. 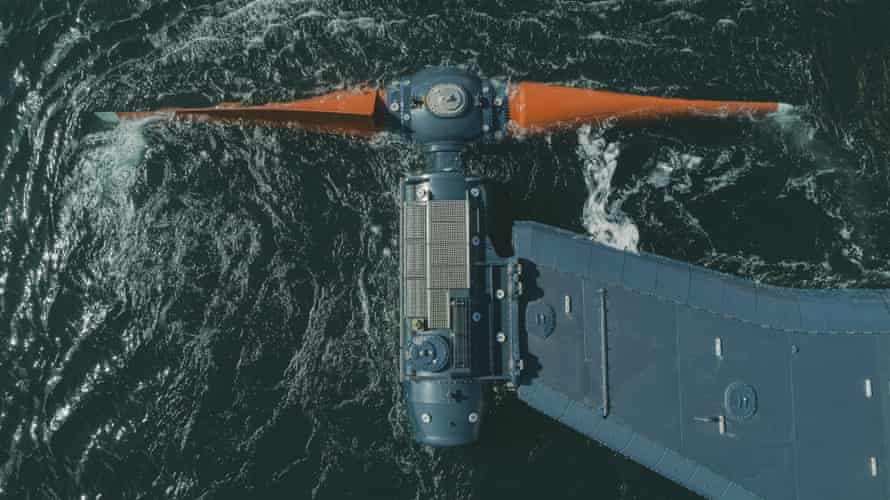 The Orbital 02 turbine blades being submerged below the waves.
Photograph: Orbital Marine Power
“All new technology in any space is more expensive than the market, so we can’t compete out of the box against mature generating technologies,” says Andrew Scott, CEO of Orbital Marine Power.
“What we need is market intervention to level the playing field.”

The UK is considered a world leader in the development of tidal power technology, but while the government provided ringfenced support to the sector from 2008, it was removed in 2016.
Last year, the governmentreintroduced short-term support, but what is needed is a long-term vision, Scott says.
“If we can’t get comfortable that there’s going to be a long-term market, we’re still at square one,” he says.
“Private investors won’t be prepared to put money in because it feels like the rug could be pulled from under you at any moment.”

Just minutes away from the O2 is an abandoned test rig installed by Irish company OpenHydro in 2006. The company entered liquidation in 2018, having been bought out by French company Naval Energies which ultimately pulled its funding.
In the same year, plans for a tidal lagoon at Swansea Bay, previously tipped to be the UK’s first commercial tidal power generator, collapsed when the government failed to guarantee financial support to cover energy costs.

This is a global challenge, Bahaj says.
“The operational environment requires high specification designs and technologies, and specialist ships for installation and maintenance,” he says.
“All these activities demand money from developers who, unlike oil and gas, are mainly SMEs with limited financial resources. Funding availability, including government technology support, is the major challenge which limits scale-up and cost reductions.” 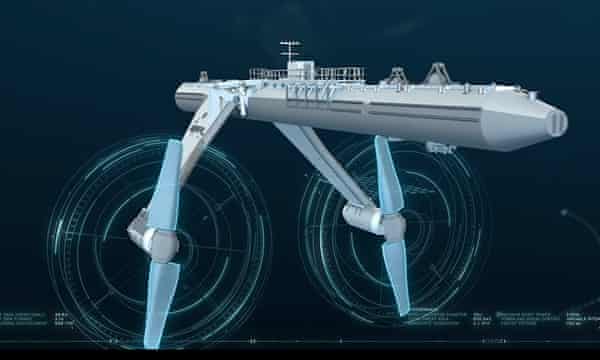 A graphic showing the Orbital O2 in action.
Photograph: Orbital Marine
Some governments are responding.
In 2020, the Canadian government announced a $28.5m investmentin floating tidal energy being developed by Scottish company Sustainable Marine at the Bay of Fundy, home to the world’s most powerful tides.
In May, it delivered the first floating tidal stream power to Nova Scotia’s energy grid.

The Faroe Islands, too, are home to ambitious tidal stream investments.
Under a 2018 agreement, Sweden-based developer Minesto will install and operate two grid-connected tidal stream units and the islands’ main power company, SEV, committed to buy the electricity.
At the time, the deal was hailed by Minesto CEO Dr Martin Edlund as playing “a significant role” in the Faroes planned transition to 100% renewable energy by 2030.

Orbital’s Scott wants the UK to take a similarly ambitious approach to tidal power. “We have an ability to grow an indigenous industry here, one that can help with net zero, the levelling up agenda, the just transition,” he says. The O2 was built using a UK supply chain which generated about 60 jobs, he adds. “The industry doesn’t need to get massive and we can make a very meaningful contribution.”

Back on the boat as it navigates around Orkney’s islands, MacKenzie is watching for orcas, which had been spotted close to the O2 earlier in the day.
As tidal technology develops some scientists have raised concerns about potential effects on marine life. MacKenzie says marine mammals and fish are well versed in avoiding boats and other structures and research carried out at Emec’s test sites has shown little impact on wildlife.
Some studies have suggested that tidal and wave systems may even have a positive effect on marine life, acting as artificial reefs.

Vessels required for installation and maintenance do generate potentially disruptive noise but the tide itself, in these rough seas, is thought to belouder than the turbine.
Turbine blades may present the greatest dangers, however research suggests their effects are rare and mostly non-lethal.

With the ability to generate large volumes of predictable, renewable energy, some experts believe tidal power could play an important part in the world’s energy mix.
“There is a global interest in tidal stream and with the current hike in gas and electricity prices, tidal-driven power is likely to compete favourably,” says Bahaj.
“In a way, the future looks brighter than it did a year ago.”
Links :
Posted by geogarage at 1:34 AM