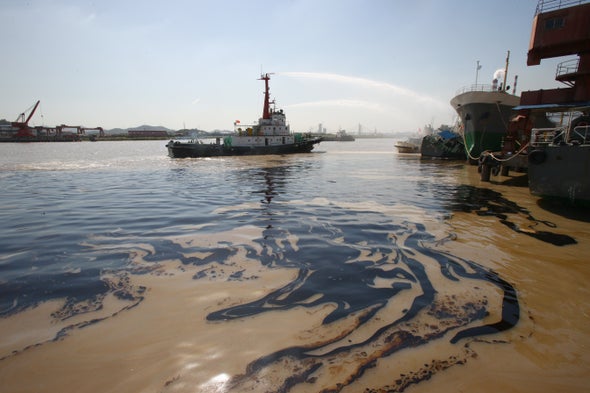 A rescue ship sprays water on a 300-tonne oil tanker which exploded and caught fire at the Zhangjianqi shipyard in Ningbo, east China's Zhejiang province on October 12, 2013, killing seven workers.
Credit: STR/AFP via Getty Images
From Scientific American by Sasha Warren
An algorithm-aided analysis of satellite images reveals the size, distribution and sources of oil slicks at sea
How many oil slicks are there in the ocean?
Where are they, and where did they come from?
These seem like simple questions, but with 139 million square miles of ocean, keeping an eye on these slippery streaks on the sea surface is no mean feat.
Now, however, researchers have used the unique capabilities of satellites to assemble what they say is the first global map of oil slicks.
Their results, published on Thursday in Science, suggest that oil covered a total area more than twice the size of France between 2014 and 2019 and that the vast majority came from human-linked sources.

Oil slicks are microscopically thin sheets of hydrocarbons.
In satellite images, they do not always appear to be a different color from the surrounding ocean because light can pass through them.
But the slicks do change the way the water reflects sunlight, just as gasoline that has leaked from a car can cause a rainbow sheen in a street puddle.
Oily surfaces also change the way water ripples when it is windy, making oil-covered patches of the ocean’s surface look calmer and smoother than surrounding areas.
For the new study, the researchers used computer algorithms to look for these “fingerprints” of oil in more than half a million radar images gathered by the European Space Agency’s Sentinel satellites, which can be used to measure the ocean’s smoothness.
Employing this new technique, the scientists spotted slicks as small as a few city blocks in size dotting 80 percent of the world’s ocean surface.

Credit: Amanda Montañez; Source: “Chronic Oiling in Global Oceans,” by Yanzhu Dong et al., in Science, Vol. 376.
Published online June 16, 2022
The largest total oil slick areas were detected in the Java Sea (between several islands of Indonesia), Mediterranean Sea and South China Sea.
Together, the slicks in these three areas accounted for nearly a third of all the oil the researchers spotted.
The region with the most concentrated oil cover was the Caspian Sea, where 20 percent of the water was covered in slicks, compared with a 4 percent average across all the world’s oceans.

The study’s lead author Yanzhu Dong and her colleagues wanted to go beyond pinpointing oil slick sizes and locations; they also wanted to identify sources.
The original goal of their study had been to find areas where oil naturally seeps from the seafloor.
This can be distinguished from human activity because natural slicks tend to be long-lived in one place, so any such slicks would show up again and again in the five years’ worth of satellite images used in the study.
These natural seeps occur globally, but they are particularly notable causes of oil slicks in the Gulf of Mexico, coastal region of Ecuador and Peru, and coast of California.

The new findings doubled the number of known natural slicks, and the researchers also noticed many more coinciding with shipping routes, oil pipelines and drilling platforms.
In some cases, leaky platforms and ships could even be spotted in the satellite images.
Based on earlier studies, “it was thought that natural seep and oil from human activities were roughly equal,” says Dong, a geographer at Nanjing University in China.
“But our new findings show that over 90 percent of all oil leaks in the oceans come from human sources.”

Most of this human oil footprint was concentrated within 100 miles of land.
“Since 2000 the population of the planet has increased by [about] two billion.
And those two billion people? Most of them are settled on the coasts,” says study co-author Ian MacDonald, a Florida State University oceanographer.
“With that population growth, you have industrial and road networks and vehicle transportation.
That runoff from the land contributes oil into the ocean.”

Unsurprisingly, the study found that the greatest contributions from pipelines occurred in areas known for their oil infrastructure, such as the North Sea and Gulf of Guinea.
(The researchers found the largest contribution from pipelines in the heavily drilled Gulf of Mexico, but it is harder to precisely single out oil leaked from that source in the region because it is also home to one of the largest natural seeps by area).
But on a global scale, leaky drilling platforms and punctured pipelines accounted for only a tiny fraction of oil coverage.
Almost all 550,000 square miles of human-related slicks—a little more than the land area of Peru—came from oil left trailing behind ships and washed off the land by rainfall.
“We have a globalized supply chain,” MacDonald says.
“Since 2000 the amount of international shipping ocean has increased nearly threefold.”

Signals that implicated shipping were most clearly seen in major port regions such as the South China Sea but also out in the deeper ocean.
It was in open-ocean areas that Dong and her team spotted 21 slicks near ships and in shipping lanes, where floating oil tends to form a telltale linear shape.
“It’s these small-scale spills that are dominating, rather than the big ones that capture the media attention and the public imagination,” says Ira Leifer, an oil seep scientist and CEO of a green-tech company called Bubbleology Research International.
Leifer was not involved in the new study but wrote an accompanying article in Science on the complex impact of oil on marine ecosystems.
“I never really expected that because I didn’t think about it.
But it’s one of those [instances] where you go give a Homer Simpson ‘D’oh!’”

Oil slicks from a May 2016 pipeline leak in the Northern Gulf of Mexico.
Credit: IR MacDonald, Florida State University
Leifer suggests that using algorithms to comb through satellite images could become a powerful and accessible method for assessing the effectiveness of efforts to prevent oil spills.
He cautions, however, that spotting oil at sea does not necessarily point to immediate destructive impacts in the involved areas.
Some microorganisms can break down the slicks to use as food, and although high concentrations of oil in the water are toxic to marine life, some ecosystems can likely tolerate small amounts.
Exactly how much oil is too much needs further study, especially in coastal areas.

The oil slicks discovered in the study could also point to where other industrial pollutants that cannot be observed remotely or broken down by organisms—such as PCBs and heavy metals—are likely to be found, says Deborah French McCay, an oceanographer and director of research and modeling at RPS Group, a company whose services include environmental consulting.
She was not involved in the new study.

Dong hopes that exposing the vast extent of human-related oil slicks will inspire international cooperation to better protect marine environments, particularly along coastlines—and not only in terms of oil pollution.
“The footprint of oil slicks can also be seen as an indicator of human activities,” she says.
“We think these results will alert humanity to the ways in which humans are stressing the ocean.”
Posted by geogarage at 1:03 AM