Observations of sea ice show that large stretches of the Arctic Ocean are remaining ice-free long enough for ships to reliably transit through—something that wasn’t expected to happen to this degree for decades.
Photo by Jean Landry/Alamy Stock Photo
From Hakai Mag by Michaël Allen
As ice melts, navigable routes have opened in ways that were not expected until the middle of this century.

As the climate warms and sea ice melts, trans-Arctic shipping routes are becoming easier to navigate, a prospect that is enticing to freight companies.
These routes can cut up to 9,000 kilometers off a one-way trip between East Asia and Europe compared with shipping through the Suez or Panama Canals—shortcuts that clip roughly 40 percent off the voyage.

According to a new study, the reality of routine trans-Arctic trade could come sooner than expected. Using satellite data on daily sea ice between 1979 and 2019, the researchers found that the safe navigation season for open-water vessels in the Arctic—trips that could be embarked upon without the help of icebreakers—is already significantly longer than climate models anticipated.

With a few exceptions, most shippers avoid the hostile Arctic Ocean.
But according to Kuishuang Feng, an ecological economist at the University of Maryland who worked on the new study, observational data shows that rather than being commercially navigable by the middle of the century, as many climate models predict, several trans-Arctic routes are already navigable for large chunks of the year—and they have been for a while.

The team found that open-water ships could have been traveling through the Canadian Arctic Archipelago along the fabled Northwest Passage for more than two months of the year during the 2010s.
Captains wanting to travel between the Atlantic and Pacific Oceans along the Norwegian and Russian coasts could have done so for even longer.
This Northeast Passage was open for around three months of each year—long enough for freight carriers to make at least two round trips between ports in East Asia and Europe without any assistance from icebreakers.

According to the researchers, these routes would have only been occasionally navigable in the 1980s, and depending on the climate projections used, they were open for around two to four times longer than expected in the 2010s. 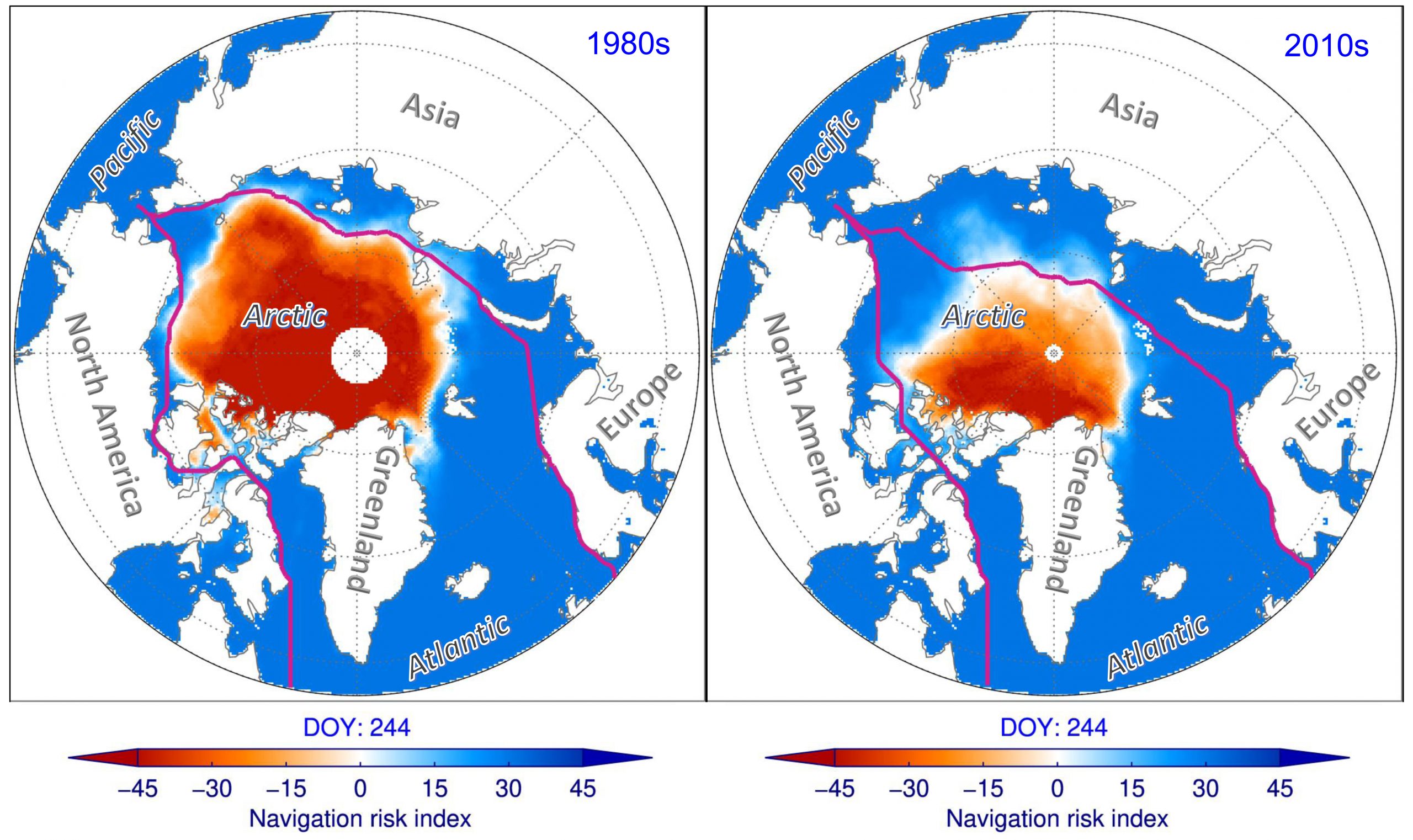 Over the past several decades, the navigability of the Arctic Ocean for open-water ships—that is, ships without any icebreaking ability—has increased considerably.
Researchers assessed a number of variables, including the prevalence of sea ice, to determine the risk to different kinds of ships. Illustration courtesy of Feng et al.

Since 1979, the area of the Arctic that is safe for open-water vessels for 90 days of the year has increased by 35 percent, the researchers claim.
With this, the routes these ships can take have changed. For instance, the best path along the Northwest Passage has shifted northward from the Amundsen Gulf to a shorter route through the Parry Channel, one that was predicted to be unnavigable until the mid-21st century.

Siri Veland, a human geographer at Norce, a Norwegian research center, says that while the finding that trans-Arctic shipping routes can be used now is not new—limited commercial trips operated over the past decade by Russian, Chinese, and Danish shipping companies, among others, is proof enough of that—“it does seem that [the researchers] have picked up a few windows for navigability that maybe have been off people’s radar.”

Veland cautions, however, that “when you have the benefit of hindsight [the Arctic] looks a lot more navigable than when you are trying to forecast.”
The problem that navigators face is interannual sea ice variability.
Year to year, there is a high variability in the exact number of days with low sea ice, particularly at either end of the summer.
This makes sending ships through the Arctic very risky, and Veland does not expect this variability to decrease for another decade or two.

But Feng did find that since 2004 open-water vessels have been able to travel through the Arctic for the whole of September.
And one of his collaborators in China who has been talking to commercial shipping companies discovered that they are already going out with ships and icebreakers and testing the routes.
“They just try to explore the possibilities,” Feng says.
Links :
Posted by geogarage at 1:19 AM