A visible satellite image of Hurricane Ida approaching land in the Gulf of Mexico taken by NOAA's GOES-16 (GOES East) satellite at 4:10 am (EDT) on August 29, 2021. (NOAA) A summary infographic showing hurricane season probability and numbers of named storms predicted from NOAA's 2022 Atlantic Hurricane Season Outlook. (NOAA)
“Early preparation and understanding your risk is key to being hurricane resilient and climate-ready,” said Secretary of Commerce Gina M. Raimondo.
“Throughout the hurricane season, NOAA experts will work around-the-clock to provide early and accurate forecasts and warnings that communities in the path of storms can depend on to stay informed.”
The increased activity anticipated this hurricane season is attributed to several climate factors, including the ongoing La Niña that is likely to persist throughout the hurricane season, warmer-than-average sea surface temperatures in the Atlantic Ocean and Caribbean Sea, weaker tropical Atlantic trade winds and an enhanced west African monsoon.
An enhanced west African monsoon supports stronger African Easterly Waves, which seed many of the strongest and longest lived hurricanes during most seasons.
The way in which climate change impacts the strength and frequency of tropical cyclones is a continuous area of study for NOAA scientists. A summary graphic showing an alphabetical list of the 2022 Atlantic tropical cyclone names as selected by the World Meteorological Organization. The official start of the Atlantic hurricane season is June 1 and runs through November 30. (NOAA)
“As we reflect on another potentially busy hurricane season, past storms — such as Superstorm Sandy, which devastated the New York metro area ten years ago — remind us that the impact of one storm can be felt for years,” said NOAA Administrator Rick Spinrad, Ph.D. “Since Sandy, NOAA’s forecasting accuracy has continued to improve, allowing us to better predict the impacts of major hurricanes to lives and livelihoods.”
Additionally, NOAA has enhanced the following products and services this hurricane season:To improve the understanding and prediction of how hurricanes intensify, NOAA’s Atlantic Oceanographic and Meteorological Lab and Pacific Marine Environmental Lab will operate five Saildrone uncrewed surface vehicles during the peak of the 2022 hurricane season and coordinate for the first time with uncrewed ocean gliders, small aircraft drone systems, and NOAA Hurricane Hunter aircraft to measure the ocean, atmosphere and areas where they meet.
The Hurricane Weather Research and Forecast Modeling System and Hurricanes in a Multi-scale Ocean-coupled Non-hydrostatic model, which have shown significant skill improvements in terms of storm track and intensity forecasts, have been successfully transitioned to the newest version of the Weather and Climate Operational Supercomputing System, allowing for uninterrupted operational forecasts.
The Excessive Rainfall Outlook (ERO) has been experimentally extended from three to five days of lead time, giving more notice of rainfall-related flash flooding risks from tropical storms and hurricanes.
The ERO forecasts and maps the probability of intense rainfall that could lead to flash flooding within 25 miles of a given point.
In June, NOAA will enhance an experimental graphic that depicts the Peak Storm Surge Forecast when storm surge watches or warnings are in effect.
Upgrades include an updated disclaimer and color coding that illustrates the peak storm surge inundation forecast at the coast.
This tool is currently only available in the Atlantic basin. 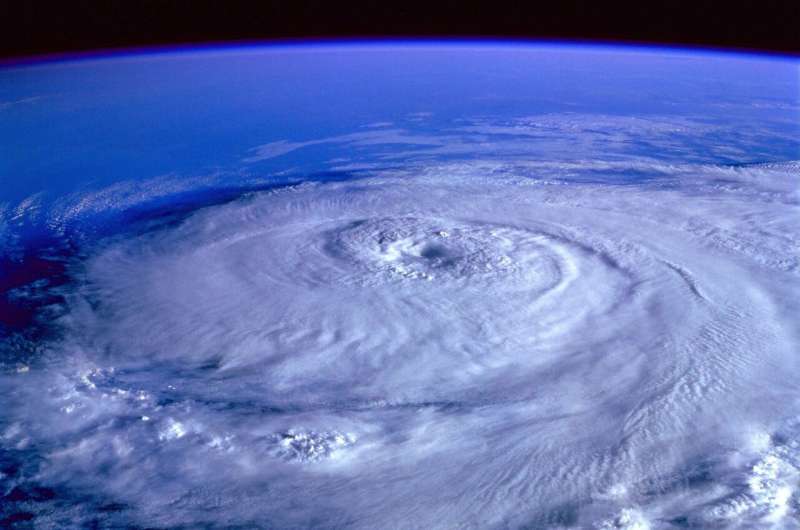 Credit: CC0 Public Domain
“Hurricane Ida spanned nine states, demonstrating that anyone can be in the direct path of a hurricane and in danger from the remnants of a storm system,” said FEMA Administrator Deanne Criswell.
“It’s important for everyone to understand their risk and take proactive steps to get ready now by visiting Ready.gov and Listo.gov for preparedness tips, and by downloading the FEMA App to make sure you are receiving emergency alerts in real-time.”
NOAA’s outlook is for overall seasonal activity and is not a landfall forecast. In addition to the Atlantic seasonal outlook, NOAA has also issued seasonal hurricane outlooks for the eastern Pacific and central Pacific hurricane basins.
NOAA’s Climate Prediction Center will update the 2022 Atlantic seasonal outlook in early August, just prior to the historical peak of the season.
Links :
Posted by geogarage at 1:31 AM