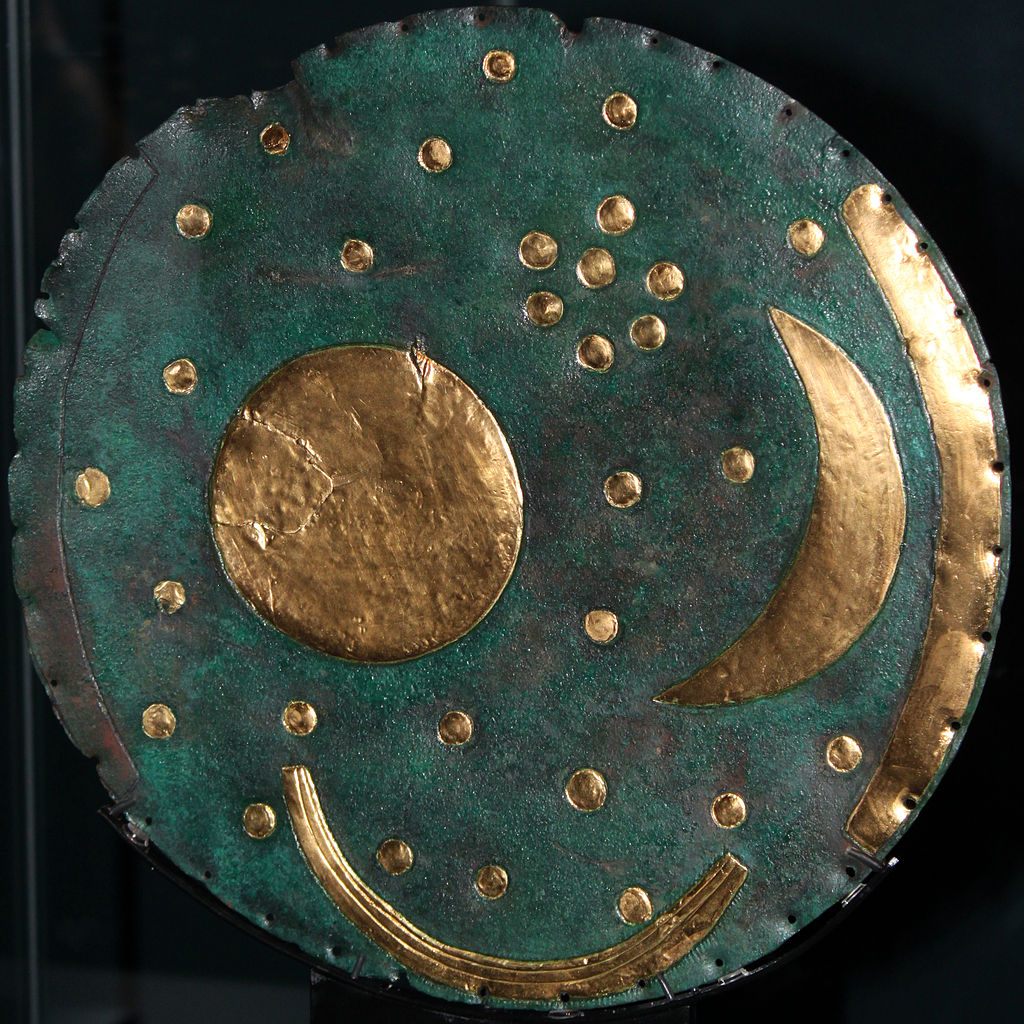 "This artefact is a window into Bronze Age culture"

From RedBrick by Gwydion Elliott

Sci&Tech editor Gwydion Elliott explores the story of an extraordinary Bronze Age artefact and speaks to Neil Wikin, curator of Early Europe at the British Museum

The Nebra sky disk, thought to be the world’s oldest map of the stars, is to go on display at the British Museum this year.
Believed to be 3,600 years old, this artefact is a window into Bronze Age culture and its fascinating links with cosmology.

The disk is around 30cm in diameter and made of bronze, which has aged to form a blue-green patina.
Inlaid within the metal are several gold symbols marking the sun or full moon, a crescent moon, and stars.
Included is a cluster of 7 stars thought to represent the Pleaides star-cluster, which is visible in the night sky today.
Far from just decoration, these elements could have made the Nebra disk a useful astronomical instrument for determining the passage of the seasons.

For the people of the Bronze Age, understanding the passage of time was very important.
I spoke to Neil Wilkin, curator of Early Europe at the British Museum, who told me that the transition from hunting and gathering to farming required ‘a different view of time, and of place.’
Placed at the whims of the seasons, farmers tracked the solstices (the days of the year marking mid-summer and mid-winter) to help them sow and harvest their crops at the right time.
As is true with monuments like Stonehenge and Newgrange, the Nebra sky disk helped them do this: two golden arcs (one is now missing) on either side of the disk intersect to create an angle of 82֯, the same angle which lies between the positions of the setting sun on the summer and winter solstices.
In a world before writing, the disk showed people how to use the setting sun to keep track of the time of year.

Neil explained to me that the disk seems to have meant different things to people as the Bronze Age progressed, reflected by the fact that different gold markings were added and removed throughout its life.
The golden arcs marking the solstices were a later addition, and one which may have obscured an older purpose for the disk.
The placement of the Pleiades star cluster between a crescent and new moon signals the beginning and end of the farming year in Europe; as a guide from the State Museum of Prehistory in Halle, Germany says: ‘The Pleiades were visible […] for the last time in the evening sky alongside the young new moon around 10 March, while the full moon would accompany their reappearance in the morning sky around 17 October.’

Going even deeper, the disk may contain a code for aligning the solar and lunar calendars – the position of the moon as well as the precise number of stars on the disk seem to suggest this.
Keeping track of the movements of both the sun and the moon was important for keeping time in this period, and so aligning their calendars was useful.
There is some scepticism as to whether the disk could really do this; Neil told me that he personally finds the Halle Museum’s account ‘very convincing’ but said that often in the study of prehistory ‘we never have 100% certainty’ about the artefacts that are found.

The movement of the sun and stars and the passage of time seem to have been of paramount importance to the people of the Bronze Age – even Stonehenge is aligned with the solstices.
Newgrange, a monument in County Meath, Ireland, has an inner chamber which is filled with a ray of golden sunlight as the sun sets on the winter solstice.
Beyond helping farmers plant their crops properly, this fixation on the passage of time surely implies a religious significance.
Midwinter could be a ‘critical and dangerous’ time for Bronze Age peoples, Neil told me.
As such the winter solstice must have taken on a great deal of importance, as it represented the start of longer and warmer days, and the return of the farming season.

The religious connotations of the disk changed again when a third grooved golden arc was added, this time to the bottom edge.
The markings on and around this arc suggest that it represents a mythical sky-boat.
The myth of a ship that carries the sun across the horizon is an old one, and representations of it can be found from Egypt to central Europe.
This helps illustrate how cultures were more interconnected in this period than you might first think.
The disk, which is attributed to a site near Halle, Germany, contains copper from Austria, as well as gold and bronze from Cornwall.
"Cultures were more interconnected in this period than you might first think"
Little is known about society at this time – with most settlements lost, Neil explained, burial sites are often our best source of evidence.
While many people seem to have been buried in a simple fashion, some graves formed enormous monuments.
Alongside those buried in this way there are often richly decorated weapons and jewellery.
In this way we can see what might well be the emergence of upper and lower classes in society.
I asked Neil more about this, and he told me that there is much debate about whether society was more hierarchical or egalitarian in this period.
The basis of social hierarchy, he told me, could have been the control of substances such as wool, amber and bronze, or power could instead have had more to do with religion.
Neil told me that in recent years there has been something of a shift in perspective towards a more egalitarian view of the past, with a shift away from what he called ‘a quite Thatcherite model’ of social structure.
At the same time he noted that academics should be wary of ‘idolizing the past.’

The Nebra sky disk is a fascinating window into the lives and cultural practices of Bronze Age peoples – a period of history that is very much shrouded in mystery.
It will be displayed in the British Museum this year as part of an exhibition called The World of Stonehenge.
Links :
Posted by geogarage at 1:18 AM