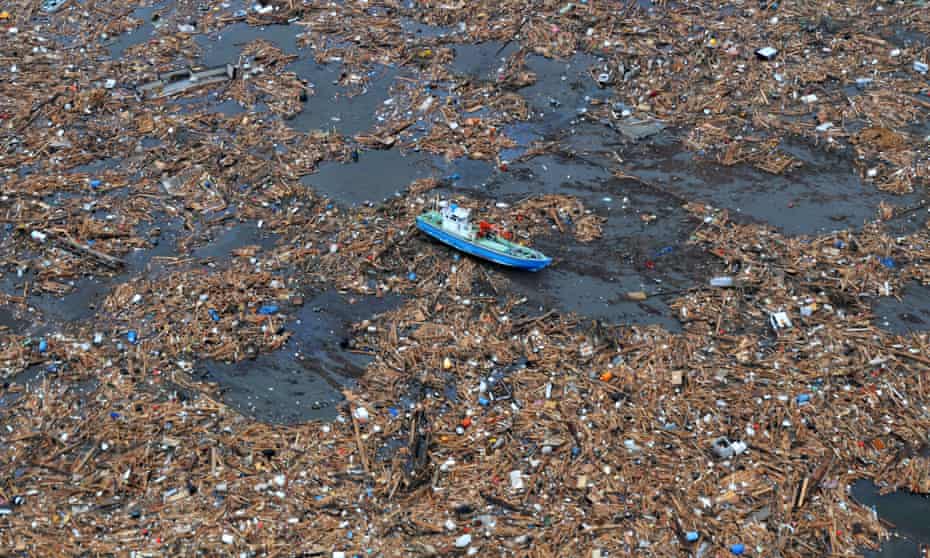 Some of the debris washed out to sea by Japan’s 2011 tsunami.
Some of it came ashore the following year in the US.
Photograph: Science History Images/Alamy

From The Guardian by Russell Thomas

Ocean plastic has become a route for invasive species that threaten native animals with extinction, with Japan’s tsunami sending nearly 300 species ‘rafting’ across the Pacific

Japan’s 2011 tsunami was catastrophic, killing nearly 16,000 people, destroying homes and infrastructure, and sweeping an estimated 5m tons of debris out to sea.

That debris did not disappear, however. Some of it drifted all the way across the Pacific, reaching the shores of Hawaii, Alaska and California – and with it came hitchhikers.

Nearly 300 different non-native species caught a lift across the ocean in what can be thought of as a “mass rafting” event.
The Smithsonian Environmental Research Center in 2017 counted 289 Japanese marine species that were carried to distant shores after the tsunami, including sea snails, sea anemones and isopods, a type of crustacean. 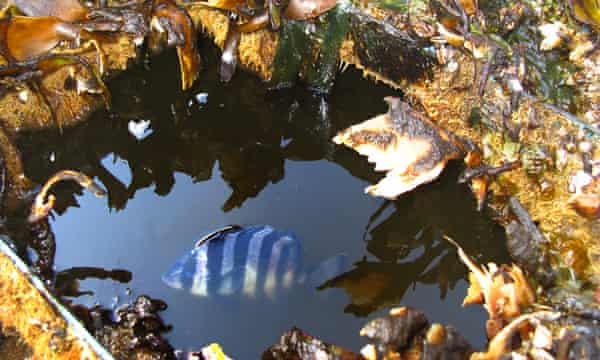 A striped beakfish swims in a water-filled box onboard a Japanese boat that washed ashore in Washington state, US. Five of the fish survived hitching a ride across the Pacific. Photograph: Allen Pleus/AP
Plastic rafting poses a huge and mostly unknown danger.
Invasive species that ride plastic litter to new shores can reduce habitats for native species, carry disease (micro-algae is a particular threat), and put further strain on ecosystems already pressured by overfishing and pollution.
According to David Barnes, marine benthic ecologist at the British Antarctic Survey and visiting lecturer at Cambridge University, rafting increases “extinction risk [while] reducing biodiversity, ecosystem function and resilience”.

The tsunami also showed something new: many of the animals survived more than six years adrift, longer than previously thought possible.

Rafting – or oceanic dispersal – is a natural phenomenon.
Marine organisms attach themselves to marine litter and travel hundreds of kilometres.
Free-floating clumps of seaweed such as sargassum, sometimes 3 metres thick, provides a home for certain “rafting species” in the Atlantic, such as reef fish, or pipefishes and seahorses, which are both poor swimmers. 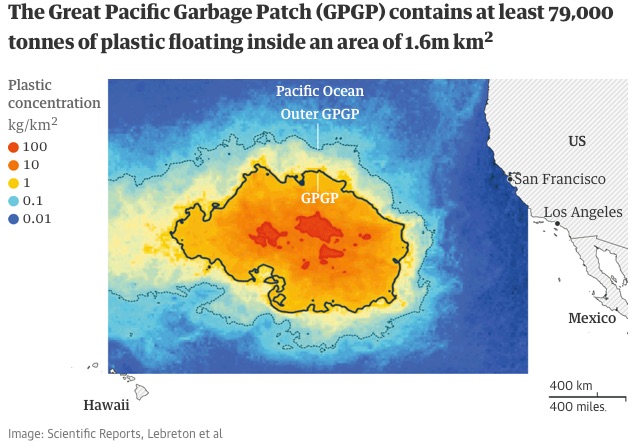 A 2018 estimate of the Great Pacific Garbage Patch, which disperses plastic litter to the remotest corners of the planet.
Graphic: Guardian
Prof Bella Galil, curator at Steinhardt Museum of Natural History, Tel Aviv University, said: “Transoceanic rafting is a fundamental feature of marine evolutionary biogeography and ecology, often invoked to explain the origins of global patterns of species distributions.”

But while it is relatively rare for a non-native species to successfully survive in a new environment, she says, the huge increase in waste being dumped at sea, as well as abandoned fishing gear, enables biofouling: aquatic organisms attaching themselves where they are not wanted.

This turns “a rare, sporadic evolutionary process into a quotidian one”, she says. Invasive species can threaten biological diversity, food security and human wellbeing.
Sea grapes from Australia arriving in the Mediterranean in 1990, for example, displaced other marine algae – setting off a domino effect that ultimately led to a reduction in native gastropods and crustaceans.

One of the most potent corridors for marine invasions is from the Red Sea, via the Suez canal, into the Mediterranean.
Galil notes that of 455 marine alien species currently listed in the eastern Mediterranean, most are thought to have come through the canal, thanks to the prevailing northward current or via ballast water, hitching a ride mostly on plastics. 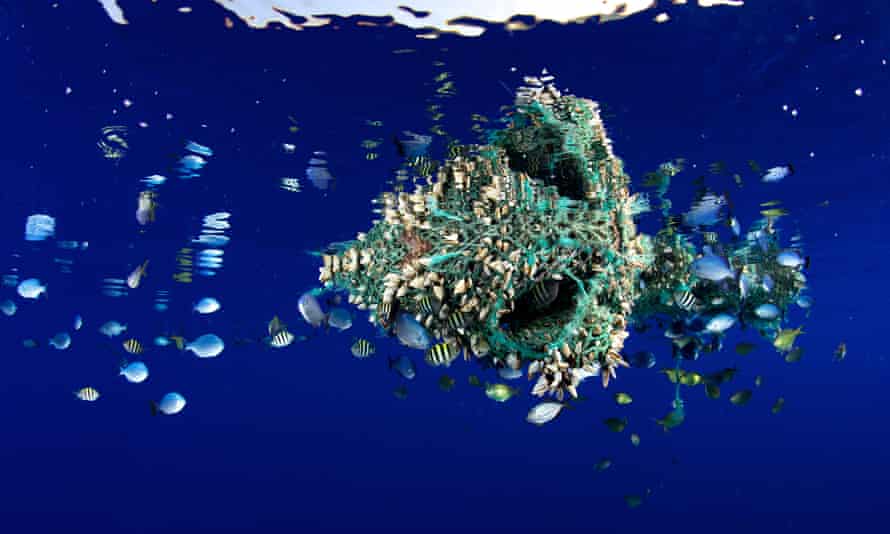 Ocean debris floating off Hawaii has become home to many fish and invertebrates. Photograph: Bryce Groark/Alamy

These invasive species do not just hang around. Many have spread into the central and western Mediterranean, again often colonising floating litter.
As well as adversely affecting critical habitats, Galil says, some are “noxious, poisonous, or venomous and pose clear threats to human health”.
Long-spined sea urchins and nomad jellyfish, both venomous and both native to the Indian Ocean, are just two examples now causing damage in the Mediterranean.
The route is likely to become even more popular after the widening of the canal, Egypt’s response to the grounding of the container ship Ever Given earlier this year.
“Larger canal, larger vessels [will mean] likely larger volume of Red Sea species arriving in the Mediterranean,” Galil says.

Plastic rafting is far from limited to the Mediterranean. There has been a hundredfold increase in marine plastics in the past two decades, which Barnes calls an “ecosystem changer”.

“Plastic, particularly, has massively increased the transport possibilities in terms of how much flotsam there is, its variety (in size and structure), where it goes and how long it floats for,” he says. “Furthermore, plastic can increase local spread of invader species when they do arrive and establish.” One compilation from 2015 listed 387 species, from micro-organisms to seaweeds and invertebrates, found to have rafted on marine litter, in “all major oceanic regions”.

Barnes has even found plastic raft invaders in the Southern Ocean, disproving the idea that Antarctica’s freezing temperatures would keep them at bay.
The Antarctic may be particularly sensitive to such invasions, with its endemic species having evolved in near isolation, and within a very narrow range of environmental conditions.
“Any species lost here is a loss of global biodiversity: they only live around Antarctica, and the blue carbon [CO2 held in oceans] they store provides some powerful fightbacks against climate change,” he says – blue carbon referring to the carbon held by ocean life, such as kelp and coral polyps.

With the surface of the ocean now dotted with plastic, there is no limit to where it can travel, taking invaders with it.
Tens of thousands of species can migrate from “anywhere to anywhere, on durations of days to decades”, Barnes says.

One of the key interchanges on this marine expressway network is the North Pacific Gyre, home to the Great Pacific Garbage Patch, the largest concentration of plastic in our oceans.
Here, currents and marine debris converge, and the currents then disperse the litter to the remotest corners of the planet. Similarly, the South Pacific Gyre is thought to be responsible for the (mainly plastic) litter on beaches on Rapa Nui (Easter Island).

According to a 2018 study in Marine Pollution Bulletin by researchers at Spain’s University of Oviedo, 34% of debris examined on Easter Island carried organisms from elsewhere.
These included water striders, a stony coral called Pocillopora and Planes major, a species of crab.
Another study by the same authors found plastic rafting along about 120 miles (200km) of coastline on the Bay of Biscay, with plastic fishing, leisure and household goods carrying non-native invasive species such as the giant Pacific oysterand the Australian barnacle. 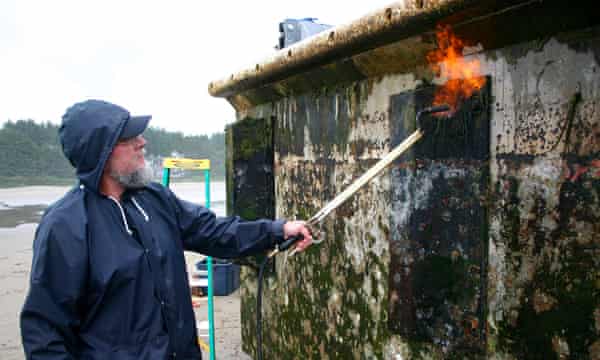 Burning marine organisms off a Japanese dock that broke free during the tsunami and came ashore in Oregon the following year.
Photograph: Reuters
Some of the world’s most precious environments could be threatened, including the Galápagos Islands.
With a plastic crisis so bad that 400 plastic particles have been found per square metre on the islands’ worst-affected beaches, and some of that plastic already known to host non-native species, it is not hard to imagine an invasive species soon threatening the islands’ famously unique wildlife.
Other remote islands such as Saint Helena, Ascension and Tristan da Cunha are also “highly vulnerable to invasion”, Barnes has reported, due to “little marine traffic and intact endemic species”.

In 2018, Barnes went a step further, describing marine plastic as an ecosystem in itself, in which the only winners are the colonising fauna, what he referred to as the “plastisphere”.

So what can be done about the plastisphere and who is responsible? In the context of the Suez canal, Galil says: “If we adhere to the ‘polluter pays’ principle, Europe is complicit – the canal mainly serves Europe.”
But she also argues for an immediate reduction in the amount of plastics in the environment – and “until then, a strictly enforced prohibition of ocean dumping”.

Tracking technology may also help, such as the Integrated Marine Debris Observing System (IMDOS), a proposed – though not yet implemented – system that would combine satellite imagery, trawl surveys, observations from ships, and data submitted to various organisations to keep track of marine litter. 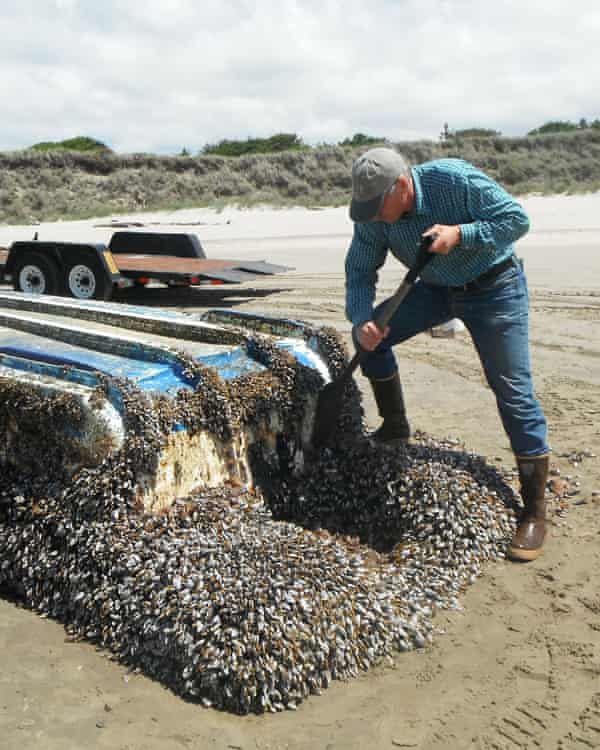 Inspecting a Japanese vessel on Long Beach, Washington state. Nearly 300 species of marine fauna are reported to have been carried across the Pacific on debris from the tsunami.
Photograph: Russ Lewis/AP
Another effort to standardise the monitoring of marine plastic is Floating Ocean Ecosystems (FloatEco), a multidisciplinary project, partly funded by Nasa, to “better understand dynamics of floating plastics in open ocean environments”.
And there are organisations such as Ospar, which brings together 15 governments and the European Union to cooperate in the environmental protection of the north-east Atlantic Ocean.

“A global problem like marine plastic litter, and all the challenges it creates, is impossible to solve without collaboration,” says Eva Blidberg, former project leader for Blastic, a recent EU initiative to map and monitor marine plastics in the Baltic Sea.

But with the pandemic leading to an estimated 1.6m tonnes of single-use PPE being discarded daily, some of it ending up in the ocean, the problem is only worsening.
When Barnes first flagged the threat of plastic rafting in 2002, he found it hard to convince people that it was a cause for concern.
“Now society is so rabbit-in-headlights in a blizzard of climate and biodiversity problems that it is still difficult to convince folk that it is worth worrying about,” he says.

Given it is impossible to stop organisms from doing what they will, the only real way to repel the raft invaders is to take away their rafts.
Monitoring and collaboration are important, says Blidberg, but she adds: “The most important thing is to plug the marine litter tap.”