How a Chinese sailboat became a microcosm for Arctic geopolitics 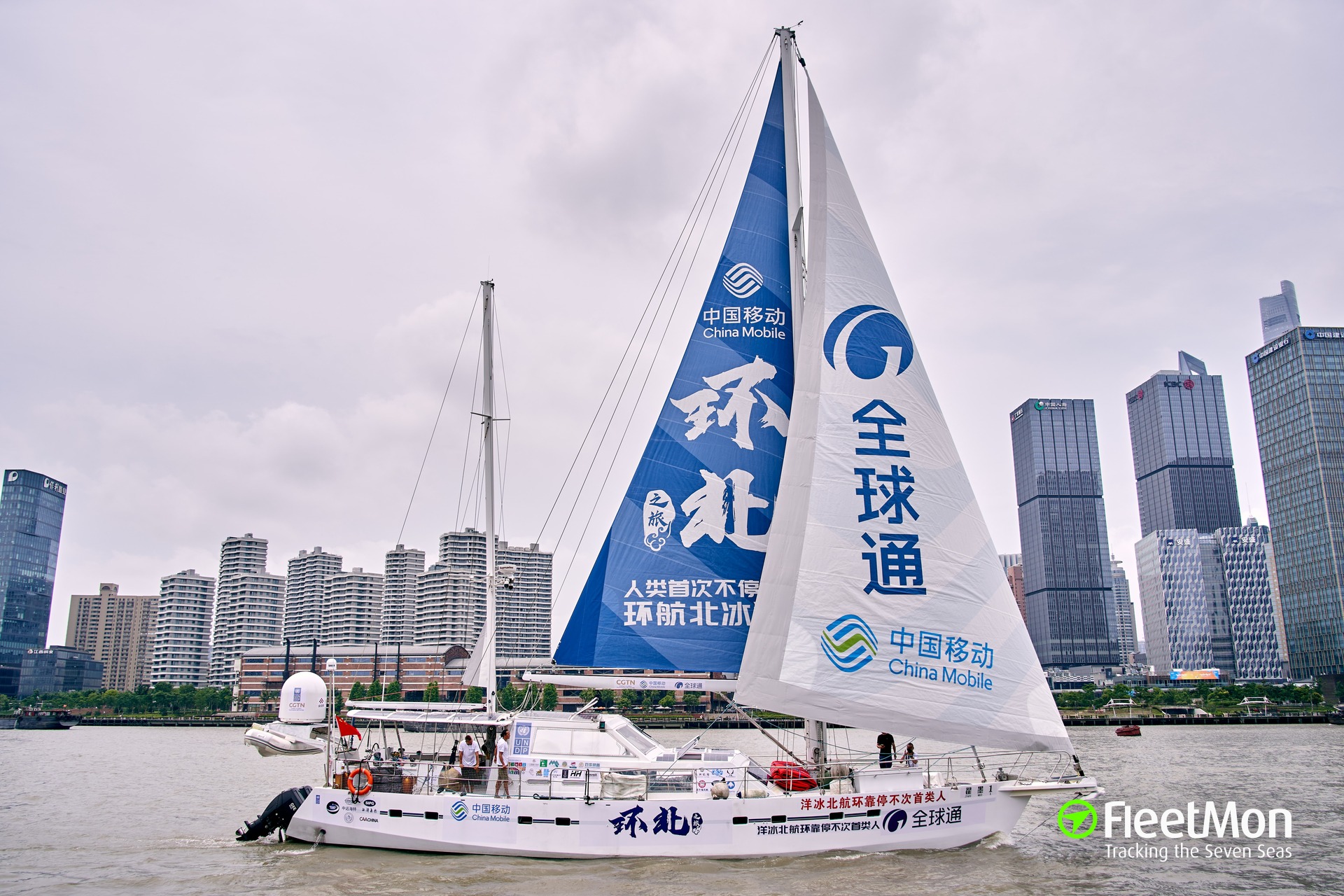 The Zhai Mo 1 departing Shanghai on June 30, 2021.Credit: FleetMon
From The Diplomat By Trym Eiterjord
A Chinese sailor’s attempted journey through the Arctic Ocean ran aground on disputed sovereignty complaints.
On June 30, Zhai Mo, a Chinese painter-turned-adventurer, set sail from Shanghai on what was supposed to be, in his own words, the first-ever non-stop circumnavigation of the Arctic Ocean.
Zhai, whose earlier nautical achievements include a two-year solo circumnavigation of the Earth, was now embarking on a four-month journey along the shores of the world’s northernmost ocean, ostensibly to bring attention to the effects of climate change in the Arctic.
Yet there was more to the northbound odyssey than the environment.
“This voyage will help implement the Belt and Road Initiative,” the China Daily declared as the modestly named Zhai Mo 1 departed Shanghai.
As climate change thaws open previously iced-over waterways in the circumpolar north, Beijing has begun using the term “Polar Silk Road” to refer to the Arctic Ocean and the various sea routes that crisscross it, including the Northern Sea Route along Russia’s northern coast, the Northwest Passage via Canada, and, pending further sea ice decline, a possible transpolar route cutting across the North Pole.
The Polar Silk Road, as with the Belt and Road Initiative more broadly, has become shorthand for the geoeconomic goals that Beijing endeavors to realize in the region, with shipping forming a key interest.

On the 76th day of the journey to circumnavigate the Arctic non-stop, Chinese captain Zhai Mo and his crew entered the Northwest Passage, marking the journey's halfway point. #China pic.twitter.com/ofKgW3Z24z

But as the Arctic sea ice continues to diminish and its waters become more navigable, disputes over the legal status of various channels and straits are re-surfacing.
And Beijing, which only a decade ago paid little attention to maritime affairs in the Arctic, has begun to take a more active interest in the governance of these northern waters with an eye toward securing access to Arctic sea routes.
These aspirations put the country at odds with the region’s coastal states.
Whether by accident or by design, Zhai’s polar peregrinations expose these tensions.
The geopolitical undertones of Zhai’s sailing were made more overt by the plethora of state-owned companies and government agencies that have lined up to sponsor and support the voyage.
Telecom major China Mobile is using the voyage as a branding opportunity, having partnered with Zhai to emblazon the state-owned company’s logo across the ship’s hull and sail.
Other state-owned sponsors include shipping giant COSCO, which started sending commercial voyages through the Northern Sea Route in 2013.
China Global Television Network (CGTN), the international division of CCTV, the country’s state-controlled broadcaster, is also heavily involved in Zhai’s voyage, hosting regular hour-long live streams featuring the captain discussing his day-to-day experiences navigating the Arctic.
Another sponsor, China Institution of Navigation, which recently began working more closely with the country’s polar research community and shipping industry in an effort to improve China’s polar seafaring capabilities, sent high-ranking representatives to Zhai Mo 1’s launch in Shanghai.
A month after setting sail, Zhai and his crew of two reached the Bering Strait, the Pacific gateway to the Arctic Ocean, to commence their polar circumnavigation.
They hung west toward the north coast of Russia, intending to sail via the Northeast Passage.
In early August, however, the crew encountered problems as they were nearing the Vil’kitskii Strait, located at the western entrance to the Northern Sea Route – part of the passage that Russia claims as internal waters.
Unable to produce the necessary paperwork to enter the strait, which is subject to Russian laws, the Russian Coast Guard denied the vessel passage. 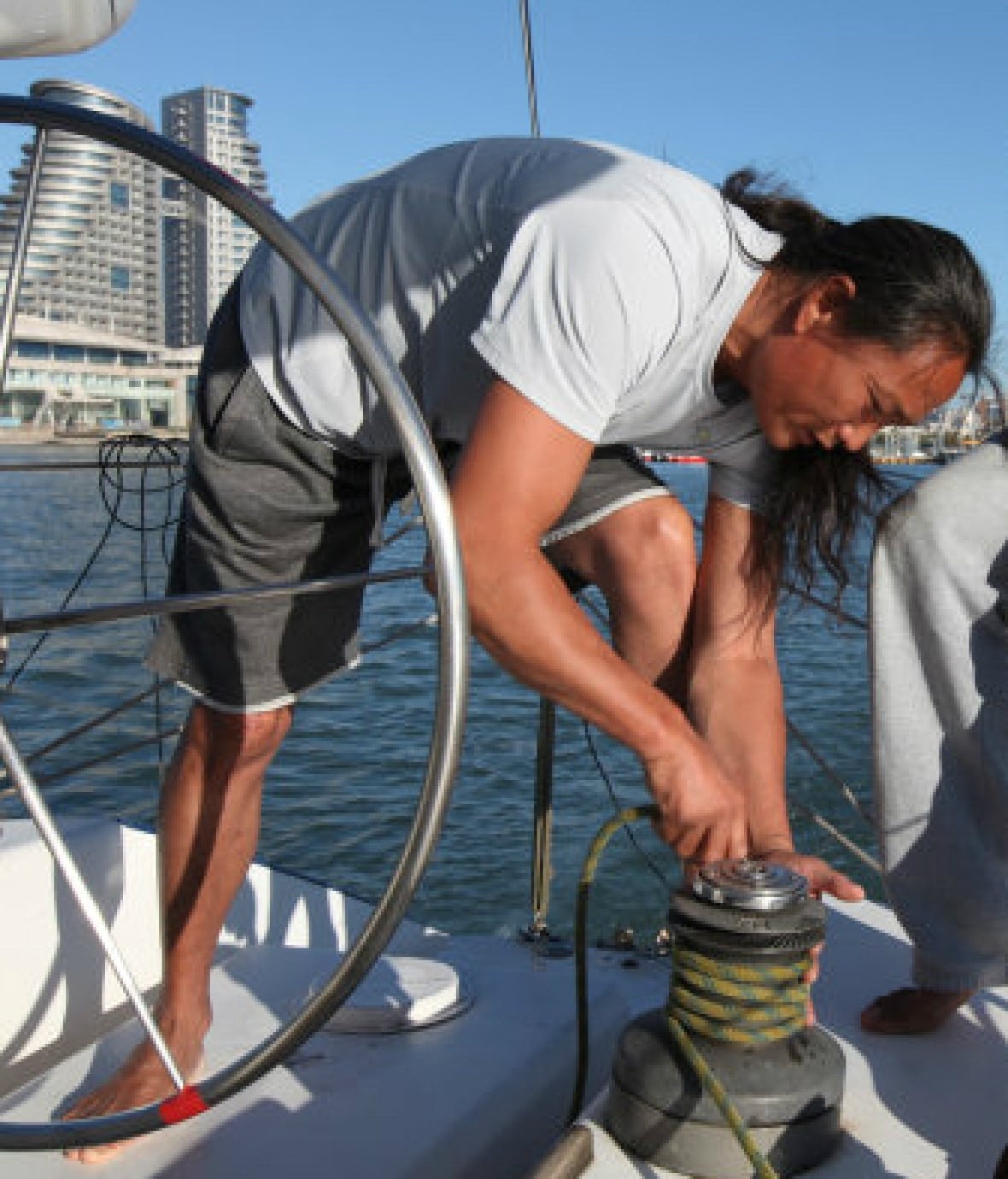 A photo of Zhai Mo working on a boat, posted on his personal blog in 2015. (blog.sina.com.cn/zhaimo)
In response, Zhai tried sailing north in an attempt to navigate around the strait but was stopped there as well, this time by heavy sea ice.
Blocked in, Zhai sent word to the ship’s owner in China, which, on August 9, filed an application with the Russian authorities.
Two days later, they granted Zhai permission to pass through the strait and continue his voyage westward.
Having overcome his brush with Russian maritime law enforcement in the Arctic, in mid-September, Zhai prepared to enter the Northwest Passage.
Much as how Russia exercises sovereignty over the Northern Sea Route, Canada claims the Northwest Passage as internal waters and mandates that foreign-flagged ships may only enter at their discretion.
Typically, foreign vessels have only needed to notify Canadian authorities before entering the Northwest Passage.
Last year, however, Ottawa issued a ban on pleasure crafts operating in its Arctic waters, including sailboats, to protect vulnerable communities in the area, which are largely Indigenous and lacking in medical facilities, from the spread of COVID-19.
The ban remains in effect today.
While international crafts “exercising their right of innocent passage” can be exempted, they are required to notify Canadian authorities at least 60 days before entering the country’s northern waters.

It seems, however, that Zhai did nothing of the sort.
The day before his planned entrance to the passage, the Chinese sailor proclaimed, “The international community views the passage as a sea route for international navigation.” Canada does not share this view: On September 16, Chinese media reported that Zhai had been “illegally stopped,” this time by the Canadian Coast Guard, as he was making his way from the North Atlantic Ocean into Lancaster Sound, the eastern opening of the Northwest Passage.

Transport Canada, the government agency responsible for regulating Canadian waterways, quickly refuted the claim that Zhai had been turned away when trying to enter the Northwest Passage, stating instead that Zhai had “not entered Canada’s Arctic Waters” and that they had been monitoring his vessel and had informed him of the ban on pleasure crafts.

Chinese state media judging the ban to be illegal is significant, as it would – assuming editorial decisions are sanctioned by Beijing – imply opposition to Canada’s sovereignty over the Northwest Passage.
If so, this would signal that China has grown bolder when it comes to asserting itself in the Arctic.

So far, Beijing has not taken a clear official position on the legal status of either the Northeast or the Northwest Passage.
In 2012, when the Chinese-flagged research icebreaker Xuelong completed its first voyage through the Northern Sea Route, state media noted that disagreement existed over whether certain segments of the route constituted “waters for international navigation.”
Then, when asked at a press conference in 2016 about China’s position on the legal status of the Northwest Passage, a foreign ministry spokesperson gave a non-answer, noting, “Canada considered that the route crosses its waters, although some countries believed it was open to international navigation.”
In its first Arctic policy, released in 2018, Beijing tip-toed around these issues again with a sweeping statement that it “respect[s] the sovereignty, sovereign rights, and jurisdiction enjoyed by the Arctic States.”
The policy also stressed, however, that “the freedom of navigation enjoyed by all countries in accordance with the law [of the sea] and their rights to use the Arctic shipping routes should be ensured.”

A prerequisite for observer status at the Arctic Council, the region’s main inter-governmental forum, is recognition of Arctic states’ sovereign rights and jurisdiction in the region.
China has been an Arctic Council observer since 2013.
A break with the status quo would inevitably strain relations with Canada and Russia, as well as with the other Arctic Council member states.
China will “not overstep its position, nor will it be absent” from Arctic affairs, the 2018 policy paper states; but Beijing’s ability to balance what it sees as its rights in the Arctic with what its circumpolar counterparts consider diplomatically palatable is likely to become trickier if the country’s maritime activities in the region continue to grow.

Although China has yet to articulate an unequivocal position on these matters, the government’s views can be gleaned from not only the actions of Zhai Mo, but what its Arctic experts are saying, too.
While Chinese diplomats have largely toed the line of respecting Arctic states’ sovereignty, domestic academic discussions take a more belligerent stance.
In a follow-up article, CGTN interviewed Wang Zelin, an associate professor of political science at Northwest University of Politics and Law in Xi’an, who has published extensively on international law and Arctic shipping.
He, too, called the alleged actions by Canada illegal, asserting that “the Northwest Passage is an important sea route between the Atlantic and Pacific Oceans,” which should be considered a strait used for international navigation.

In many ways, Wang’s conclusion represents the position taken by most legal scholars in China studying the Arctic.
They tend to emphasize ensuring unfettered access to Arctic waters, by, as one recently published paper puts it, working toward “defining Arctic sea routes as international straits.”

China would not be alone in protesting the Canadian position.
The United States and the European Union similarly maintain that the Northwest Passage constitutes a strait used for international navigation.
Nor is this the first time a Chinese-flagged vessel has attempted to navigate the Northwest Passage.
In 2017, the research icebreaker Xuelong became the first Chinese-flagged vessel to navigate through the passage during the country’s eighth Arctic research expedition.
While that voyage prompted some critics to declare that the presence of a Chinese vessel was eroding Canada’s sovereignty over its waters, Xuelong’s transit was completed amicably and by the book.

It should be noted, however, that Sino-Canadian relations have taken a nosedive since then as a result of Huawei executive Meng Wanzhou’s detention in late 2018 and Beijing’s retaliatory imprisonment of two Canadian nationals.
In a separate op-ed to CGTN, Hong Nong, a political scientist and director of the Washington-based Institute for China-America Studies think tank, alluded to the two countries’ fraying relations.
She insisted that Zhai’s voyage did “not challenge Canada’s sovereignty or legal status over the Northwest Passage,” and that his voyage “should not be interpreted as carrying any political agenda.” Instead, she suggested that “given the current efforts by both states to resume or warm up bilateral relations,” Canadian authorities could exempt Zhai from the aforementioned ban as a gesture of diplomatic good will.
If the voyage did not initially bear an agenda, Hong seems set on giving it one. 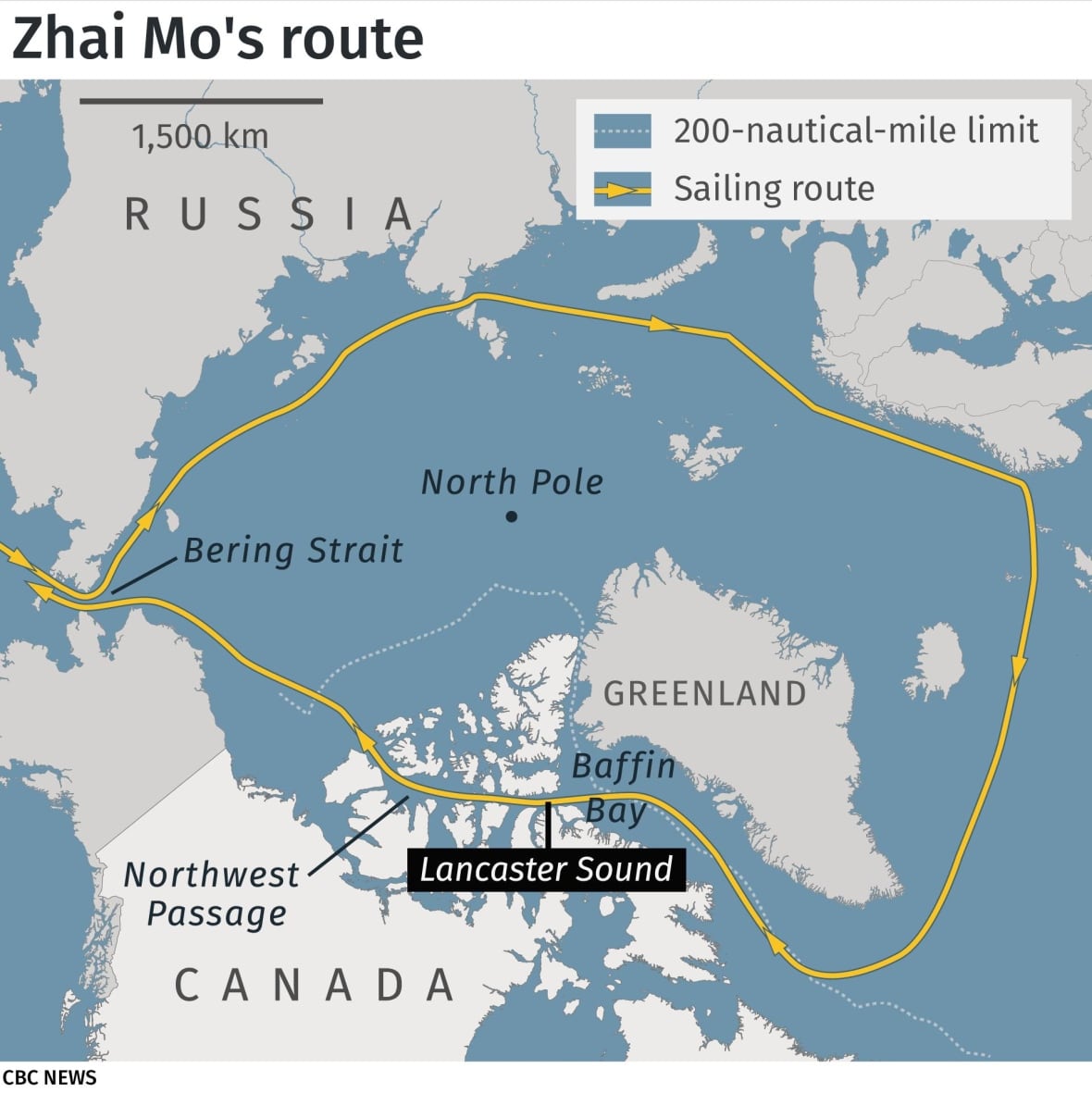 Regardless of whether Canadian authorities stopped Zhai, the artist-cum-sailor has decided to re-route his voyage through the Panama Canal.
In a video posted to CGTN’s Twitter account on September 24, Zhai announced that his boat would now turn southward, sailing down the eastern coast of North America, through the Panama Canal, and across the Pacific, in order to return to Shanghai, turning what was originally a four-month voyage into an eight-month odyssey.
The detour ironically reveals the benefits of navigating through the much shorter, if icier, Northwest Passage.

One could chalk up Zhai’s incomplete circumpolar navigation to poor planning, regulatory ignorance, or a maritime maverick coming face-to-face with the bureaucratic realities of maritime law enforcement in the Arctic.
Or it could be something more deliberate.
After all, this would not be the first time that Zhai tried to make a geopolitical statement with one of his voyages.
When the territorial dispute over the Senkaku Islands flared up between China and Japan in 2012, Zhai dutifully set sail toward the islands.
There, he, and his crew of nine scattered miniature Chinese flags in the surrounding waters.

“It was rather more of a free and personal voyage,” Zhai, whose sailboat was escorted by the Chinese Coast Guard, told the Global Times at the time.
“A Chinese man who sails for sport can’t make that much trouble.
This approach to maintaining sovereignty is a lot more peaceful.”
Links :
Posted by geogarage at 1:45 AM