Alaska to Greenland via the Northwest Passage 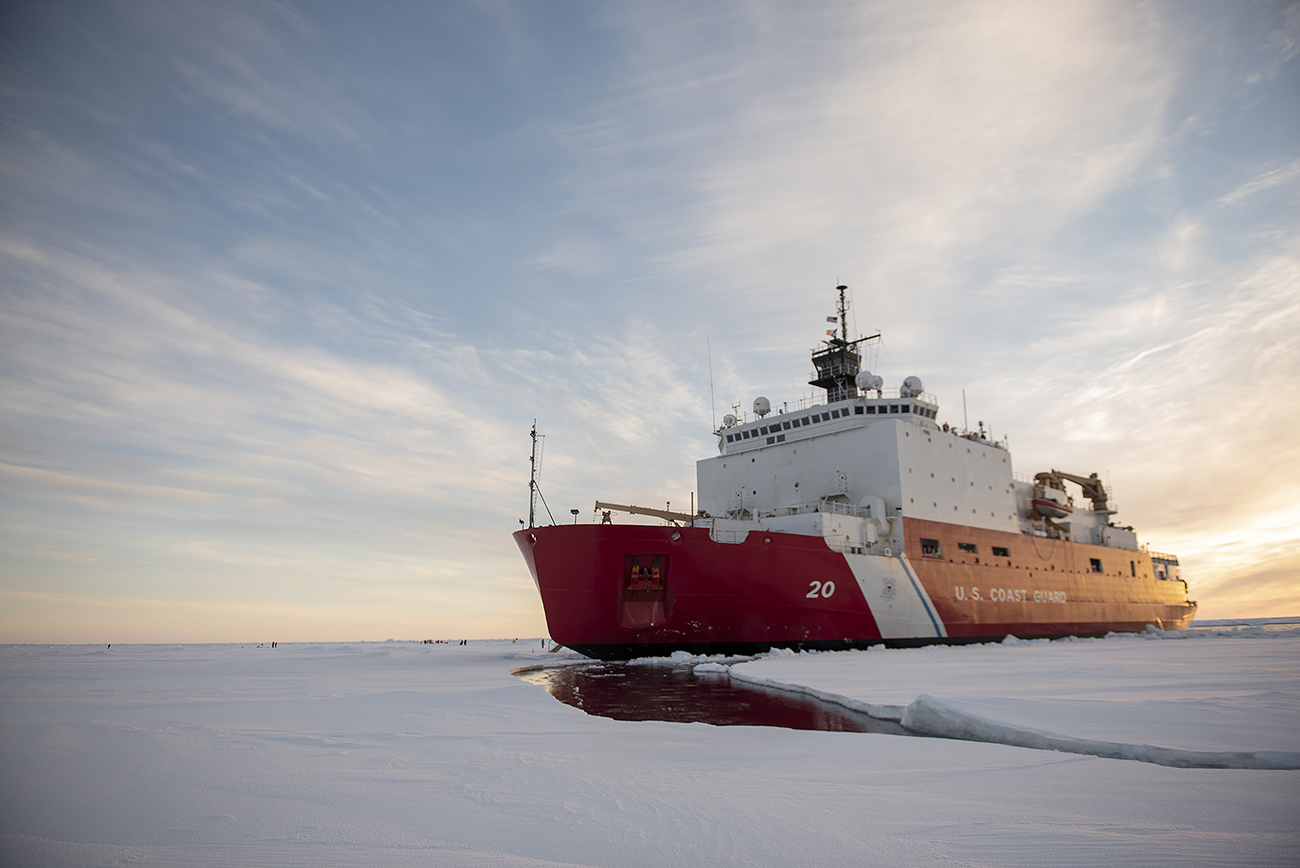 From NOAA by Lt. Patrick Debroisse

In August and September 2021, the U.S. Coast Guard Cutter Healy transited through the Northwest Passage, from Alaska to Greenland. This voyage provided members of the University of New Hampshire’s Center for Coastal and Ocean Mapping/Joint Hydrographic Center (CCOM/JHC) the opportunity to collect data, helping to fill gaps in current hydrographic coverage in the passage and in the U.S. Exclusive Economic Zone (EEZ). Data in the Arctic where sea ice impedes ships is sparse. This is concerning as the Arctic nations, especially the United States, Canada, and Greenland evaluate both extended continental shelf claims and the potential for shipping routes through the Northwest Passage. 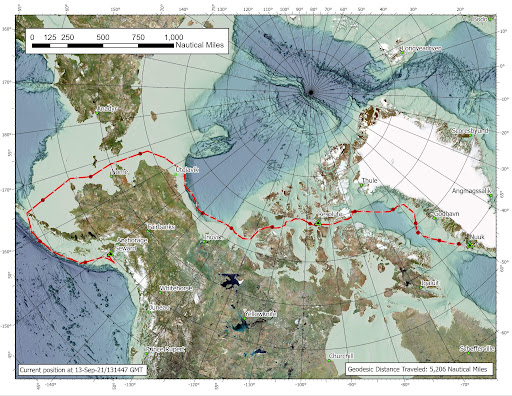 U.S. Coast Guard Cutter Healy’s track from Seward, Alaska to Nuuk, Greenland.
(Credit: Paul Johnson, CCOM/JHC)
A unique data collection platform
Healy is a unique asset to the scientists aboard in its capacity as a heavy icebreaker designed to conduct a wide range of research activities.
Healy is equipped for collecting echo sounder data; conductivity, temperature, and depth data; and is set up for scientists to bring their own equipment.
This leg was a science accommodation cruise, meaning any data had to be collected while underway as no stops were planned. Scientists aboard installed equipment to collect water and air samples as well as to test surface and deep sea water chemistry.

The mapping team’s goal is to transit over areas in U.S., Canadian, and Greenland waters where modern bathymetric data is sparse or non-existent.
Dr. Larry Mayer, from CCOM/JHC, determined priority areas with the help of the Canadian Hydrographic Service and the Danish Geodata Agency (Geodatastyrelsen).
Data was continuously collected from the time the ship left Seward, Alaska on August 25 until it arrived in Nuuk, Greenland on September 13. 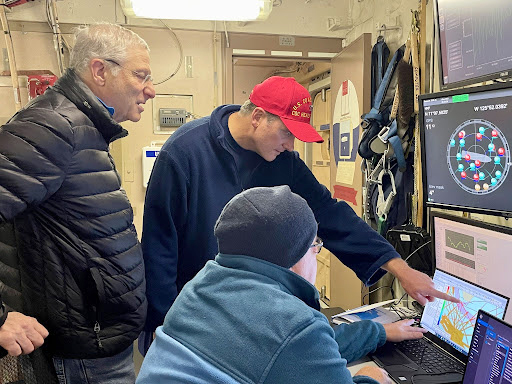 Larry Mayer (CCOM/JHC) and Paul Johnson (CCOM/JHC) discuss the survey plan with USCG Capt. Ken Boda. (Credit: John Farrell, U.S. Arctic Research Commission)
The data will be used to add to the world’s knowledge of the ocean floor via the General Bathymetric Chart of the Oceans and will be provided to the respective charting agencies – NOAA’s Office of Coast Survey, the Canadian Hydrographic Service, and the Danish Geodata Agency – for use in the safety of navigation and navigational products.
Seabed 2030 is an international initiative to map the world’s oceans by the year 2030.
For areas where the ship is traversing through U.S. waters, the data collected will contribute to Seascape Alaska, a regional mapping campaign supporting the 2020 National Strategy for Mapping, Exploring, and Characterizing the United States Exclusive Economic Zone. This National initiative also contributes to Seabed 2030.

Additional projects
Several additional National Science Foundation funded projects were carried out while Healy transited the Northwest Passage.
Two scientists from the University of Alaska at Anchorage conducted experiments to understand the exchange of water between the oceans, land, and air by tracking isotopes in water and air samples. Another group of scientists from Oregon State University are seeking to understand the primary production of phytoplankton in the changing Arctic by evaluating dissolved gases and suspended carbon to track algal blooms and attempt to determine their causes and frequency.
Additionally, two scientists from the National Geospatial Intelligence Agency were aboard to collect gravity calibration data along the passage, linking the data previously obtained in the eastern and western Arctic.

Search and rescue exercise, and helicopter operations training
In addition to the science mission of the trip, the Coast Guard took the opportunity to train in several complex evolutions.
Early in the leg, Healy conducted helicopter operations in conjunction with an MH-65 short range recovery helicopter flying out of Cordova, Alaska.
The ship’s personnel practiced receiving and launching the helicopter as well as refueling operations. 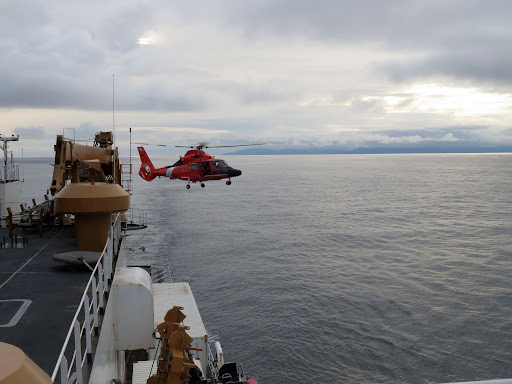 An MH-65 takes off from U.S. Coast Guard Cutter Healy during training operations.
(Credit: Lt. Patrick Debroisse, NOAA)
Later in the trip, the ship conducted a search and rescue exercise with the Canadian Coast Guard in the area of Resolute, Nunavut, Canada.
The exercise included flight operations for a visit by the Commandant of the Coast Guard, Adm. Karl Shultz, and a moc-search for a reported missing zodiak boat and crew. 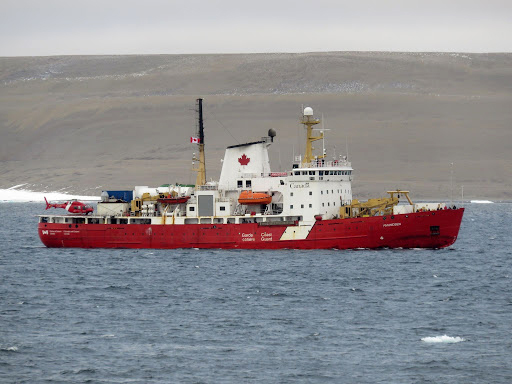