From NPR by Laurel Wamsley

An ocean expedition exploring more than a mile under the surface of the Atlantic captured a startlingly silly sight this week: a sponge that looked very much like SpongeBob SquarePants.

And right next to it, a pink sea star — a doppelganger for Patrick, SpongeBob's dim-witted best friend.

NOAA's Okeanos Explorer captured video of a notable sponge and sea star this week. In real life, the two aren't such good friends.
Christopher Mah was one of the scientists watching a live feed from a submersible launched off the NOAA ship Okeanos Explorer.
He's a research associate at the National Museum of Natural History who frequently collaborates with National Oceanic and Atmospheric Administration.He's also an expert on starfish.
Mah immediately noticed the underwater creatures' resemblance to the animated buddies.
"They're just a dead ringer for the cartoon characters," Mah tells NPR.
So he tweeted an image of the two noting the resemblance, delighting lots of folks.Someone helpfully added faces and legs.
Bad news: Sponges and sea stars aren't actually pals

Rather than chilling together under the sea, Mah suspects a different reason for the creatures' closeness: Sea stars like to feed on sponges. "In all likelihood, the reason that starfish is right next to that sponge is because that sponge is just about to be devoured, at least in part," he says.

Or maybe not.
The sponge might be bright yellow because of its chemical defenses, Mah says.

Either way, he says, "The reality is a little crueler than perhaps a cartoon would suggest."

In scientific terms, a sponge is Hertwigia, while a starfish is a Chondraster.

Mah says the starfish spotted by the expedition was probably a species called a Chondraster grandis — the pink starfish that was likely the inspiration for the Patrick character. 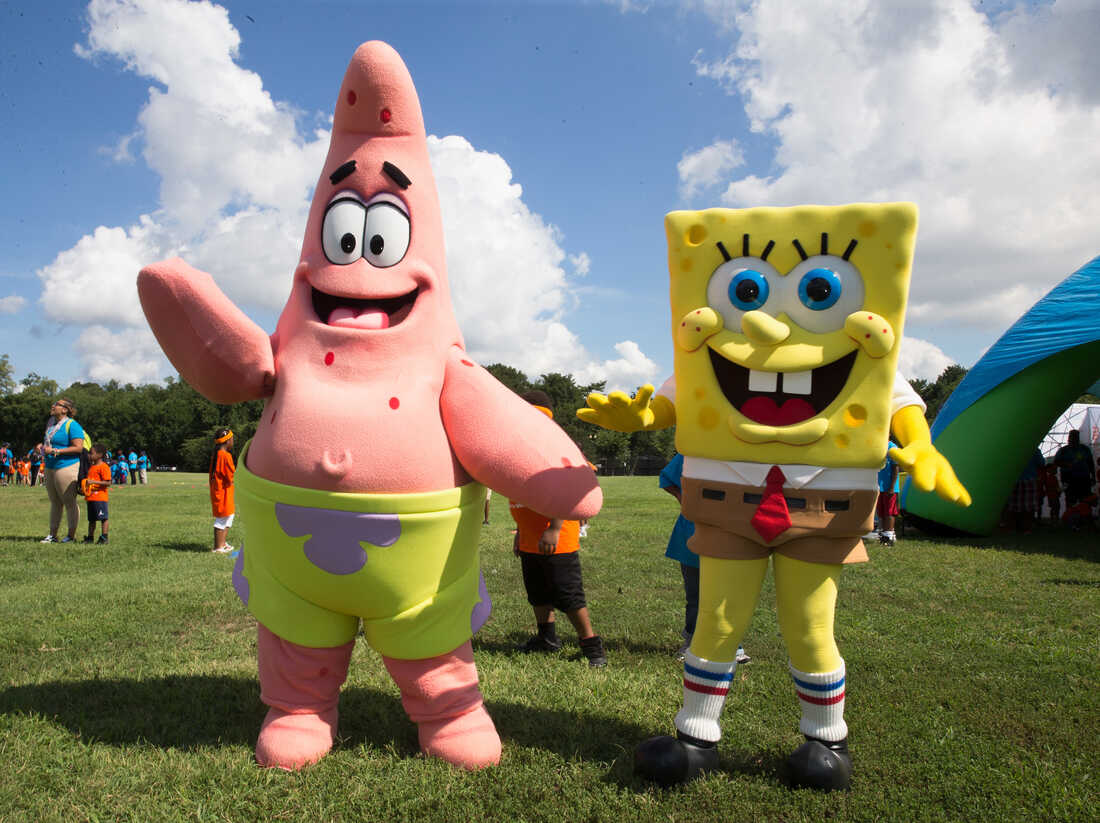 Patrick and SpongeBob are not anatomically correct starfish and sponges.
Tasos Katopodis/Getty Images for Nickelodeon
While the real-life sponge is as yellow as the Nickelodeon character, SpongeBob's shape is far from what's found in nature.

Patrick's anatomy is not exactly faithful to that of a real starfish, either.
The expedition was exploring the depths of the Atlantic

The expedition was more than 200 miles off the Atlantic coast when the now-famous sponge and starfish were sighted.

The find was part of NOAA's North Atlantic Stepping Stones, a monthlong expedition on the Okeanos Explorer to collect information about unknown and poorly understood deep-water areas off the eastern U.S. coast and high seas.
Posted by geogarage at 1:58 AM