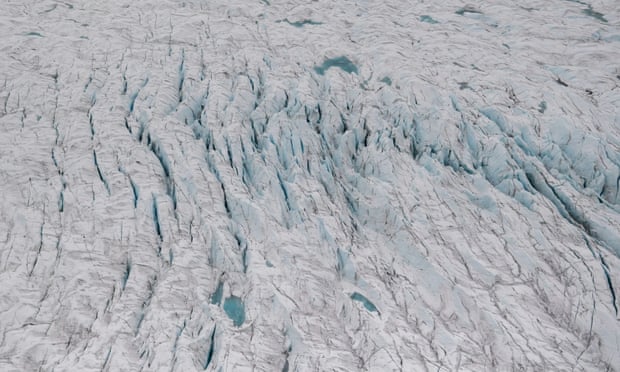 Greenland’s melting season usually lasts from June to August.
The Danish government data shows that it has lost more than 100bn tons of ice since the start of June this year.
Photograph: Reuters
From The Guardian by Oliver Milman

-Greenland’s vast ice sheet is undergoing a surge in melting, with the amount of ice vanishing in a single day this week enough to cover the whole of Florida in two inches of water, researchers have found.

The deluge of melting has reached deep into Greenland’s enormous icy interior, with data from the Danish government showing that the ice sheet lost 8.5bn tons of surface mass on Tuesday alone.

The scale of disappearing ice is so large that the losses on Tuesday alone created enough meltwater to drown the entire US state of Florida in two inches, or 5cm, of water. 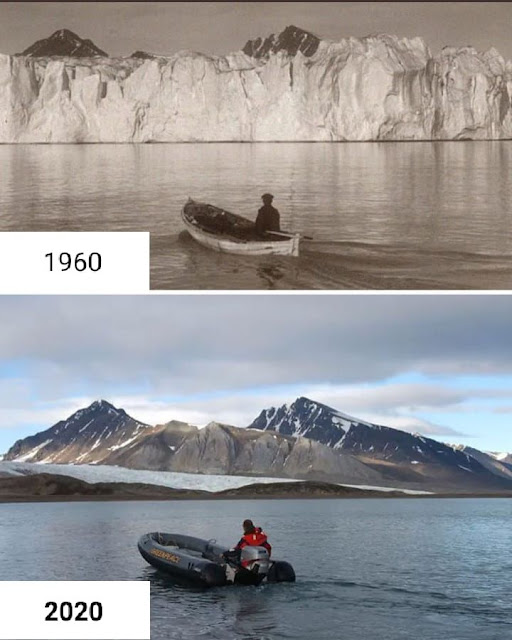 Ice that melts away in Greenland flows as water into the ocean, where it adds to the ongoing increase in global sea level caused by human-induced climate change.

“It’s a very high level of melting and it will probably change the face of Greenland, because it will be a very strong driver for an acceleration of future melting, and therefore sea-level rise,” said Marco Tedesco, a glacier expert at Columbia University and adjunct scientist at Nasa.

Tedesco said a patch of high pressure is sucking and holding warmer air from further south “like a vacuum cleaner” and holding it over eastern Greenland, causing an all-time record temperature of 19.8C in the region on Wednesday.

As seasonal snow melts away, darker core ice is exposed, which then melts and adds to sea level rise.

“We had these sort of atmospheric events in the past but they are now getting longer and more frequent,” Tedesco said.

“The snow is like a protective blanket so once that’s gone you get locked into faster and faster melting, so who knows what will happen with the melting now. It’s amazing to see how vulnerable these huge, giant areas of ice are. I’m astonished at how powerful the forces acting on them are.”

Greenland’s melting season usually lasts from June to August.The Danish government data shows that the island has lost more than 100bn tons of ice since the start of June this year and while the severity of melting is less than in 2019 – when 11bn tons of ice was lost in a single day – the area affected is much larger in 2021.

“It’s hard to say if it will be a record year for melting this year but there is a ton of warm and moist air over the ice sheet that’s causing an amazing amount of melt,” said Brad Lipovsky, a glaciologist at the University of Washington.

“The alarming thing to me is the political response, or lack of it. Sea-level rise is like a slow-moving train, but once it gets rolling you can’t stop it. It’s not great news.”

If all the ice in Greenland melted, the global sea level would jump by about 6 meters (20ft), and although this is unlikely to happen on any sort of foreseeable timescale, scientists have warned that the world’s largest island is reaching a tipping point due to the pressures exerted upon it by global heating.

Greenland’s ice is melting faster than any time in the past 12,000 years, scientists have calculated, with the ice loss running at a rate of around one million tons a minute in 2019.Greenland and the earth’s other polar region of Antarctica have together lost 6.3tn tons of ice since 1994.

This rate of ice loss, which is accelerating as temperatures continue to increase, is changing ocean currents, altering marine ecosystems and posing a direct threat to the world’s low-lying coastal cities, which risk being inundated by flooding.
A 2019 research paper found the Greenland ice sheet could add anything between 5cm and 33cm to global sea levels by the end of the century.The world is on track for “the mid to upper end of that”, Lipovsky said.

“The action is clear – we need to get to net zero emissions but also we need to protect exposed populations along the coast. This is going to be a huge problem for our coastal cities.” 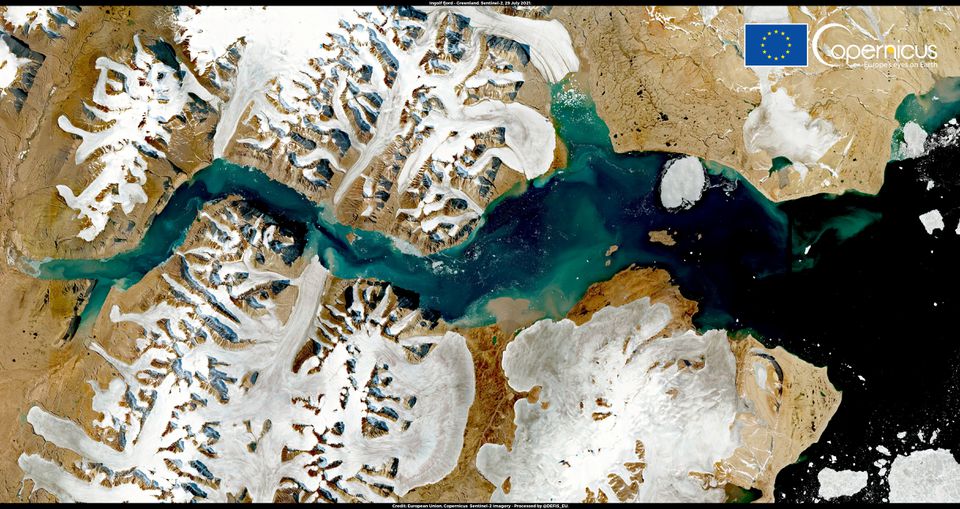 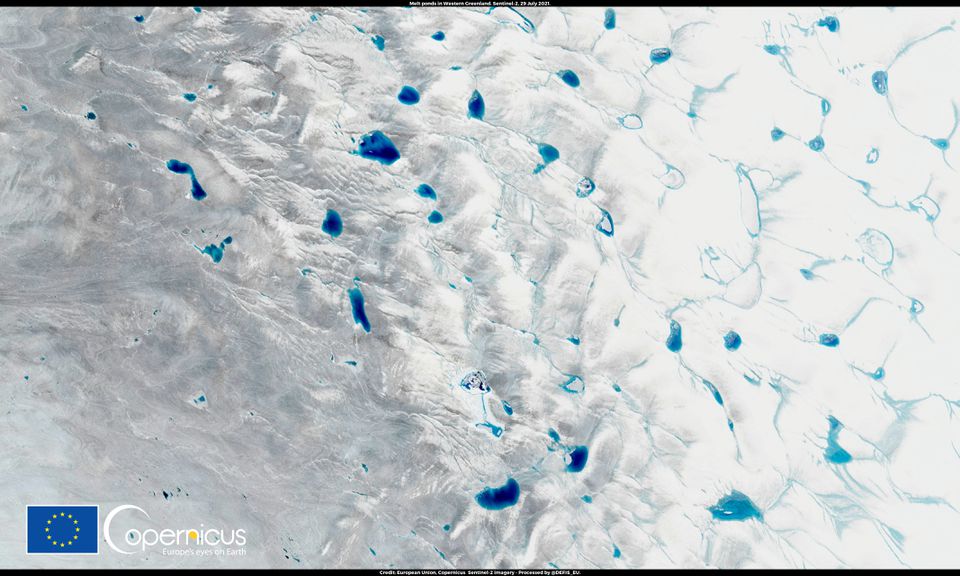 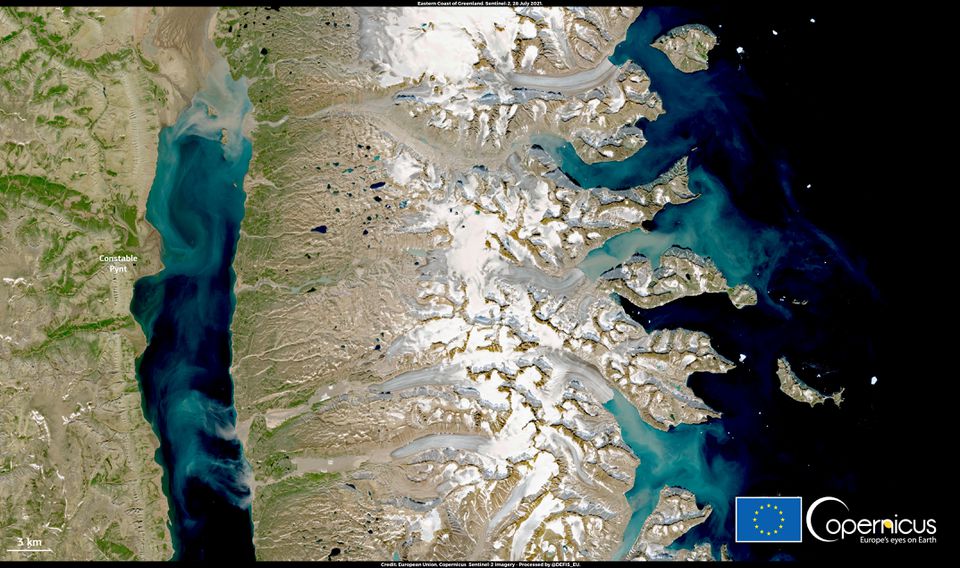 This image, acquired by one of the Copernicus Sentinel-2 satellites, shows the very significant discharge of sediment into the Arctic Ocean by glaciers melting around Constable Pynt as a result of unusually high temperatures, Greenland July 28, 2021. Picture taken July 28, 2021. European Union, Copernicus Sentinel-2 imagery - Processed by @DEFIS_EU/Handout via REUTERS 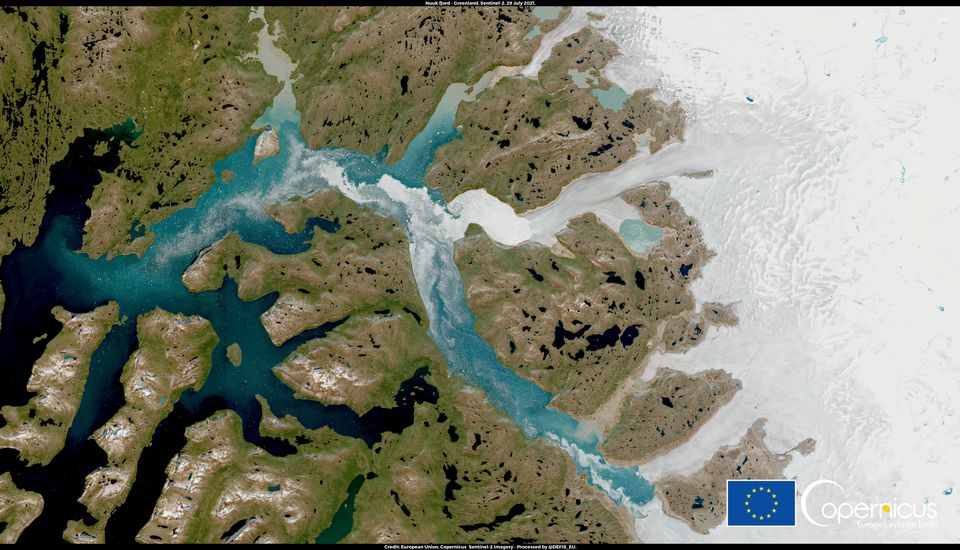