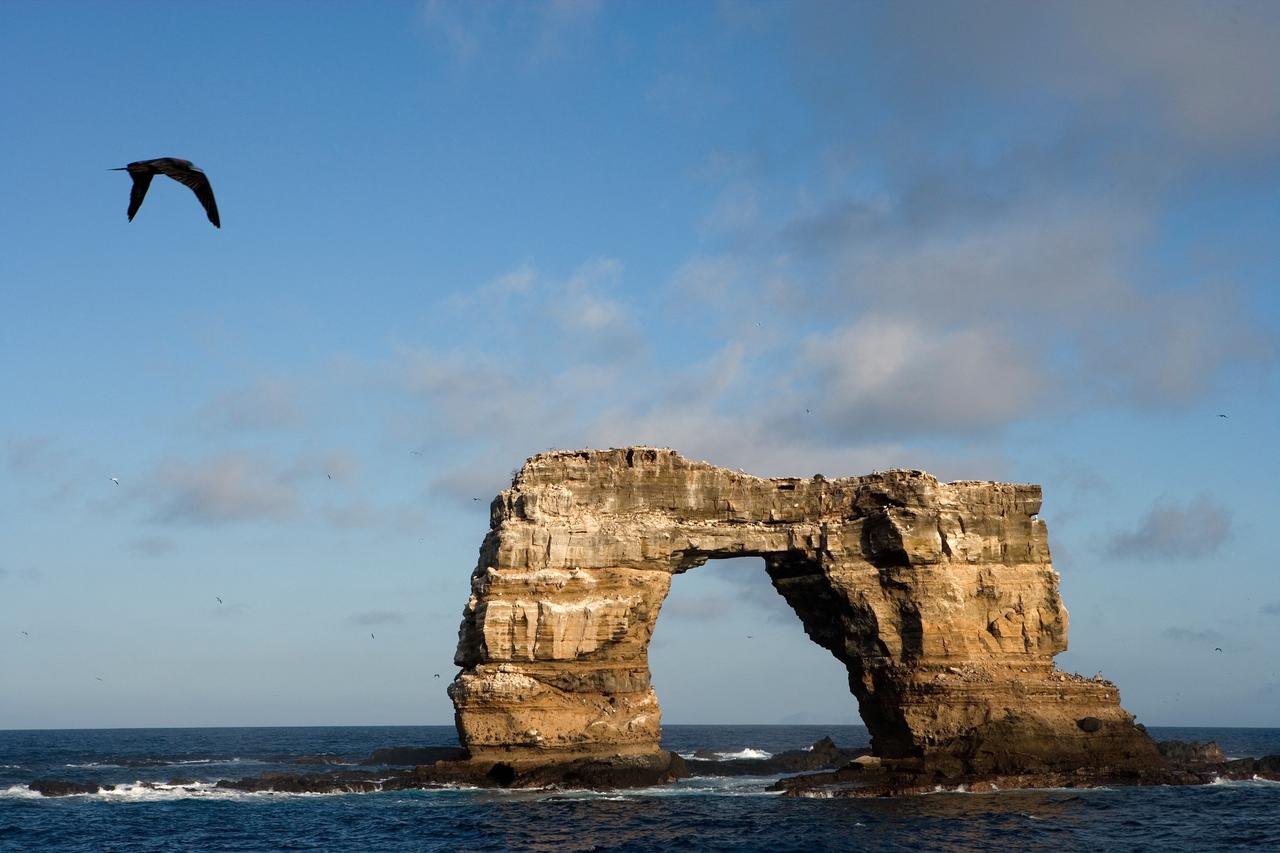 From The Guardian by Rhi Storer

Darwin’s Arch, a rock formation south-east of Darwin Island in the Galápagos archipelago, has collapsed due to natural erosion, Ecuador’s environment ministry said.

Images on the ministry Facebook page on Tuesday show two rocky pillars left at the northernmost island of the Pacific Ocean archipelago, which lies 600 miles (1,000km) off South America. 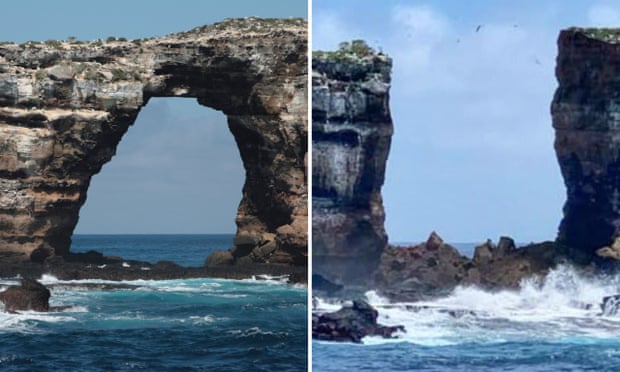 Darwin"s Arch, before and after it collapsed (Alamy/Facebook)
The post said: “This event is a consequence of natural erosion. Darwin’s Arch is made of natural stone that at one time would have been part of Darwin Island, which is not open to visits by land.

“This site is considered one of the best places on the planet to dive and observe schools of sharks and other species.”

The diving website Scuba Diver Life said visitors on a diving boat had witnessed the collapse at 11.20am local time on Monday, adding that no divers had been harmed.

The arch is famous as a diving spot for underwater encounters with sea turtles, whale sharks, manta rays and dolphins.

The rock formation was named after the British scientist Charles Darwin, who visited the islands in 1835 on HMS Beagle and developed his theory of evolution by examining Galápagos finches.

The Galápagos islands, declared as one of the first Unesco world heritage sites in 1978, contain flora and fauna not seen anywhere else on earth and are part of a biosphere reserve.
About 30,000 people live on the archipelago, spread across four inhabited islands.

Jen Jones of the Galápagos Conservation Trust said the charity was “sad to hear the news about Darwin’s Arch collapsing.
It really was an icon of the Galápagos landscape and a marker for one of the most awe-inspiring wildlife experiences on Earth, as beneath the waves can be found one of the largest aggregations of sharks in the world. 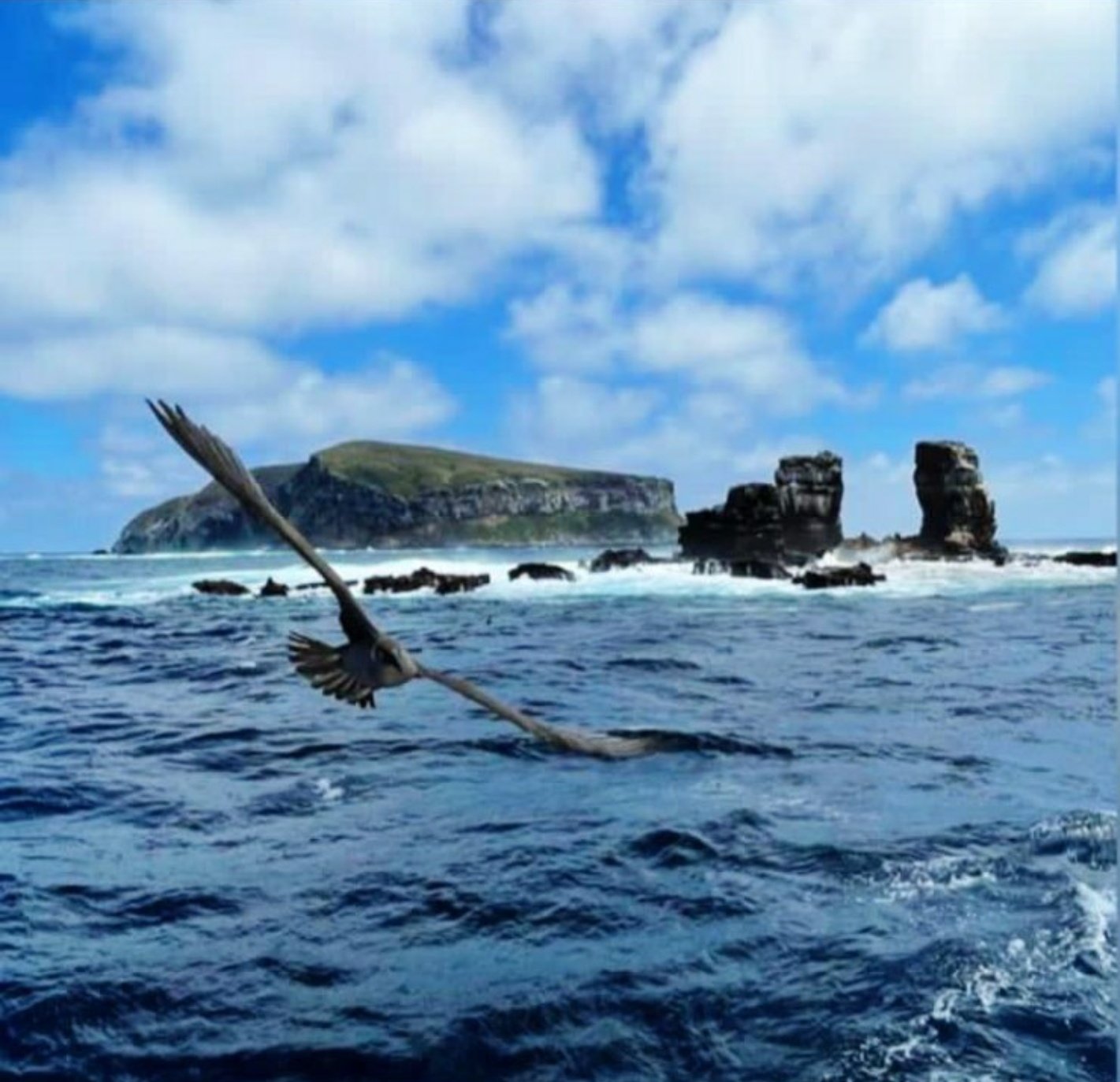 “The collapse of the arch is a reminder of how fragile our world is. While there is little that we as humans can do to stop geological processes such as erosion, we can endeavour to protect the islands’ precious marine life. Galápagos Conservation Trust is working with partners to protect these sharks both within the Galápagos marine reserve and on their migrations outside in the wider eastern tropical Pacific.”
Links :
Posted by geogarage at 1:33 AM