Relive the birth of the #A76 iceberg with this stunning animation!
The ESA animation was created using four @CopernicusEU #Sentinel1 images and shows the giant slab of ice breaking off from the Ronne Ice Shelf on 13 May 2021. A-76 is currently the biggest iceberg in the world
From RT
A gigantic iceberg, measuring over 4,000 square km (1544 square miles), has broken off the Ronne Ice Shelf in Antarctica.
The iceberg, called A-76, is now the largest floating ice mass in the world.

The size of the enormous iceberg rivals many large islands worldwide and is bigger than the Spanish resort island of Mallorca, which measures ‘just’ 3,667 square km.
The iceberg is quite long and narrow – it is around 170 km in length and only 25 km wide. 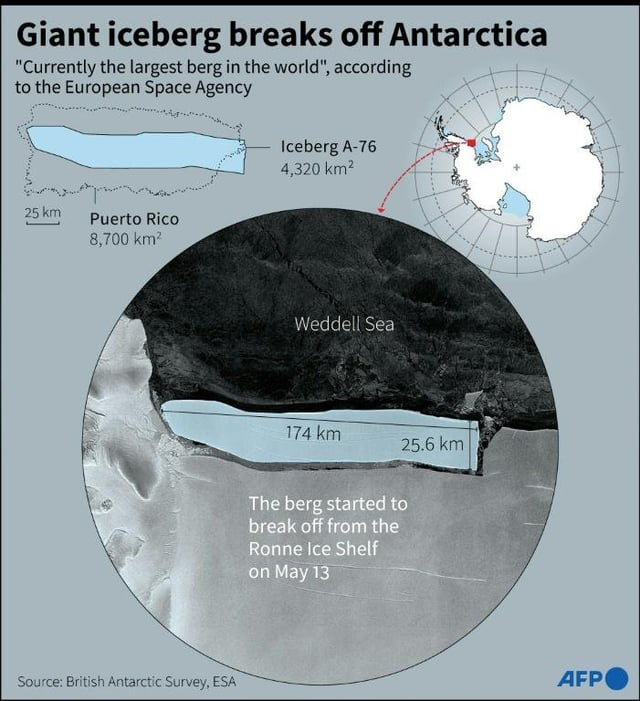 The breakage was captured by the Copernicus Sentinel-1 mission, with satellite imagery showing the ice mass split off from the ice sheet in the Weddell Sea in a nearly perfect straight line.
The new iceberg has now become the world’s largest floating ice mass, taking the title from A-23A, which is also floating in the Weddell Sea.
The previous record-holder is estimated to be some 3880 sq km in size – which is also bigger than Mallorca. 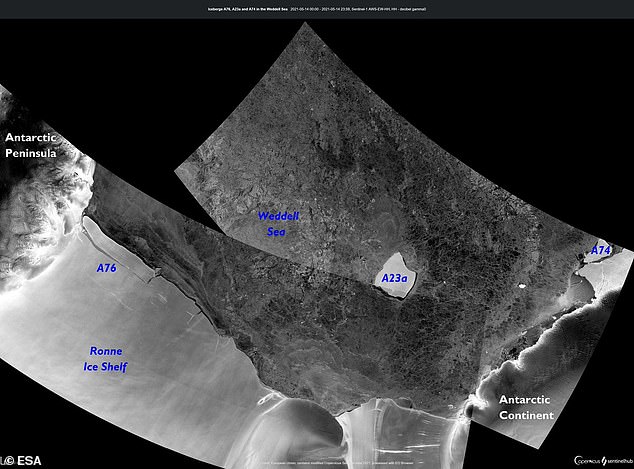 Spotting this new berg was a global effort, with the British Antarctic Survey the first to notice it had broken off, with the discovery then confirmed by the US National Ice Center using ESA Copernicus Sentinel-1 satellite images
A-23A might regain its title of the largest floater before it melts away, however, as it’s more conveniently shaped – it’s a rough square – and is less susceptible to breakage than the A-76.
Brunt Ice Shelf in Antarctica calves - A huge iceberg (1270 km²) the size of the county of Bedfordshire has broken off the 150-m thick Brunt Ice Shelf, almost a decade after scientists at British Antarctic Survey (BAS) first detected growth of vast cracks in the ice.
The birth of the new iceberg comes shortly after a true social media star – the A-68 gigantic tabular iceberg – finally melted away.
The iceberg, which at the time of its break-off measured some 5,800 square km, used to be one of the largest floating ice sheets ever reordered.

It broke off Antarctica's Larsen C ice shelf back in July 2017 and embarked on a three-and-a-half-year journey into the South Atlantic, which was closely monitored by satellites.
By April this year, the iceberg finally disintegrated, leaving no pieces large enough to track.
Links :
Posted by geogarage at 1:03 AM