With swarms of ships, Beijing tightens Its grip on South China Sea 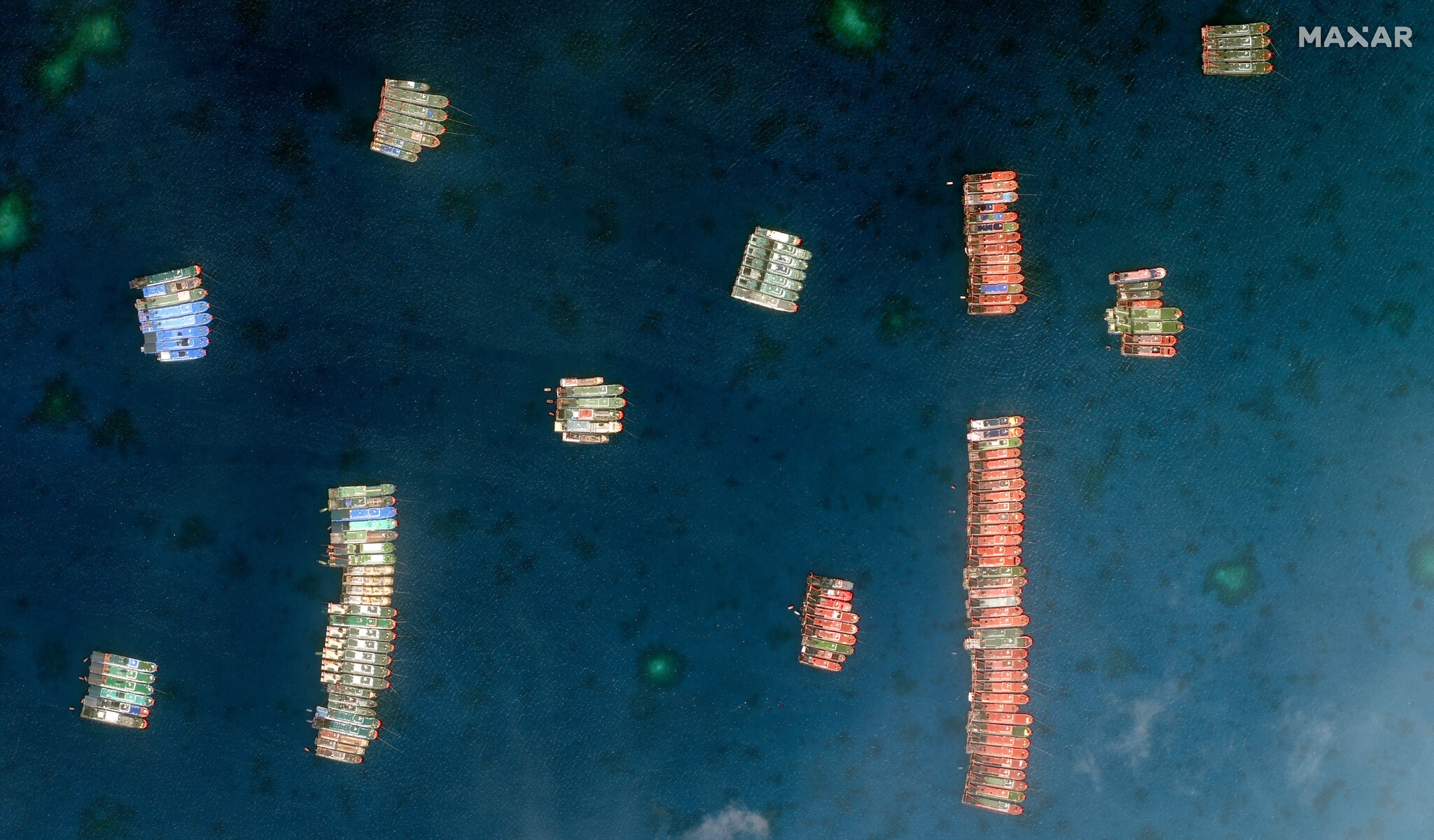 A satellite photo of Whitsun Reef on March 23.
At one point in March, 220 Chinese ships were reported to be anchored around the reef.
Credit...Maxar Technologies
From NYTimes by Steven Lee Myers and Jason Gutierrez

After building artificial islands, China is using large fleets of ostensibly civilian boats to press other countries’ vessels out of disputed waters.

The Chinese ships settled in like unwanted guests who wouldn’t leave.

As the days passed, more appeared.
They were simply fishing boats, China said, though they did not appear to be fishing.
Dozens even lashed themselves together in neat rows, seeking shelter, it was claimed, from storms that never came.

Not long ago, China asserted its claims on the South China Sea by building and fortifying artificial islands in waters also claimed by Vietnam, the Philippines and Malaysia.
Its strategy now is to reinforce those outposts by swarming the disputed waters with vessels, effectively defying the other countries to expel them.

The goal is to accomplish by overwhelming presence what it has been unable to do through diplomacy or international law.
And to an extent, it appears to be working.

“Beijing pretty clearly thinks that if it uses enough coercion and pressure over a long enough period of time, it will squeeze the Southeast Asians out,” said Greg Poling, the director of the Asia Maritime Transparency Initiative at the Center for Strategic and International Studies in Washington, which tracks developments in the South China Sea.
“It’s insidious.”
China’s actions reflect the country’s growing confidence under its leader, Xi Jinping.
They could test the Biden administration, as well as Beijing’s neighbors in the South China Sea, who are increasingly dependent on China’s strong economy and supply of Covid-19 vaccines.

The latest incident has unfolded in recent weeks around Whitsun Reef, a boomerang-shaped feature that emerges above water only at low tide.
At one point in March, 220 Chinese ships were reported to be anchored around the reef, prompting protests from Vietnam and the Philippines, which both have claims there, and from the United States. 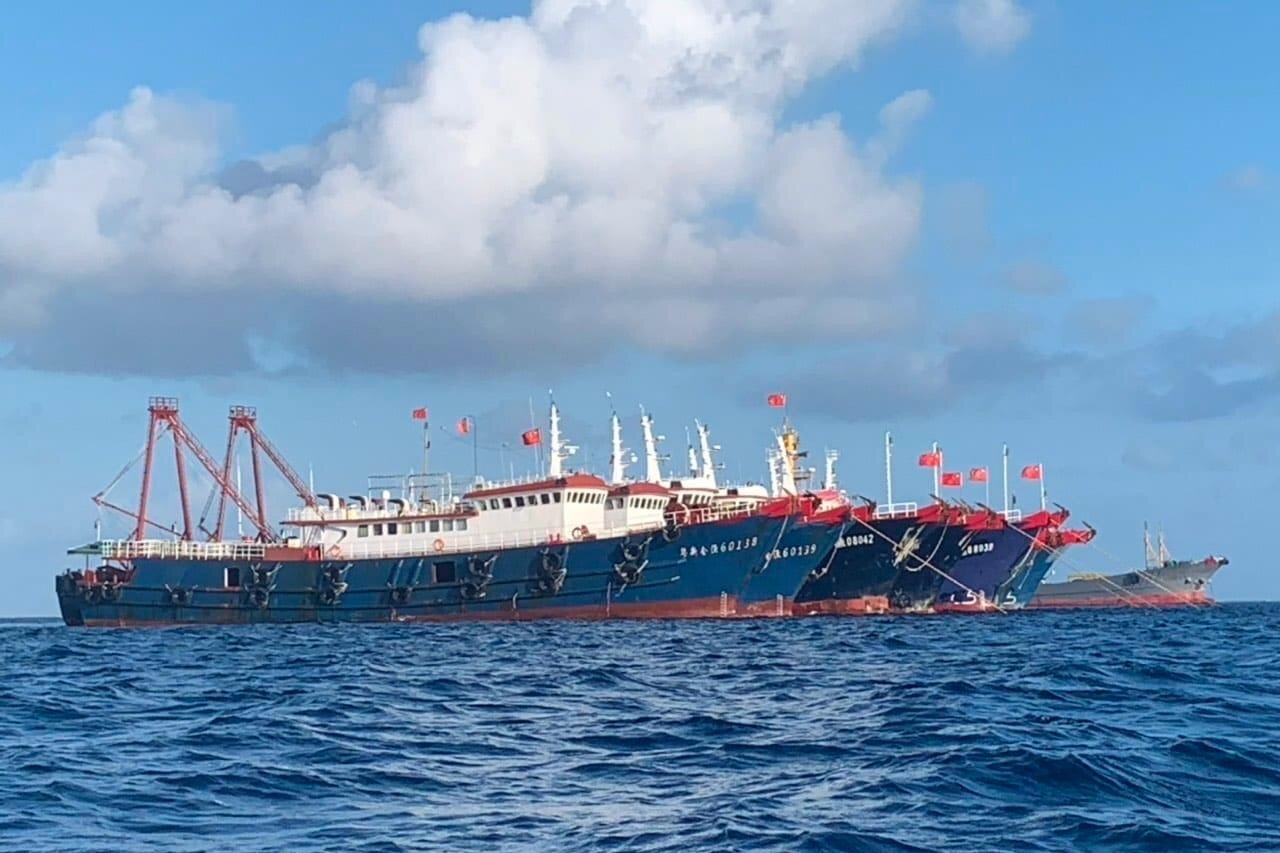 By this past week, some had left but many remained, according to satellite photographs taken by Maxar Technologies, a company based in Colorado.
Others moved to another reef only a few miles away, while a new swarm of 45 Chinese ships was spotted 100 miles northeast at another island controlled by the Philippines, Thitu, according to the satellite photos and Philippine officials.

“The Chinese ambassador has a lot of explaining to do,” Mr. Lorenzana said in a statement on Saturday.

The buildup has inflamed tensions in a region that, along with Taiwan, threatens to become another flash point in the intensifying confrontation between China and the United States.

Although the United States has not taken a position on disputes in the South China Sea, it has criticized China’s aggressive tactics there, including the militarization of its bases.
For years, the United States has sent Navy warships on routine patrols to challenge China’s asserted right to restrict any military activity there — three times just since President Biden took office in January.

Secretary of State Antony J. Blinken expressed support for the Philippines over the presence of the Chinese vessels.
“We will always stand by our allies and stand up for the rules-based international order,” he wrote on Twitter.

The buildup has highlighted the further erosion of the Philippines’ control of the disputed waters, which could become a problem for the country’s president, Rodrigo Duterte.

The country’s defense department dispatched two aircraft and one ship to Whitsun Reef to document the buildup but did not otherwise intervene.
It is not known whether Vietnamese forces responded. 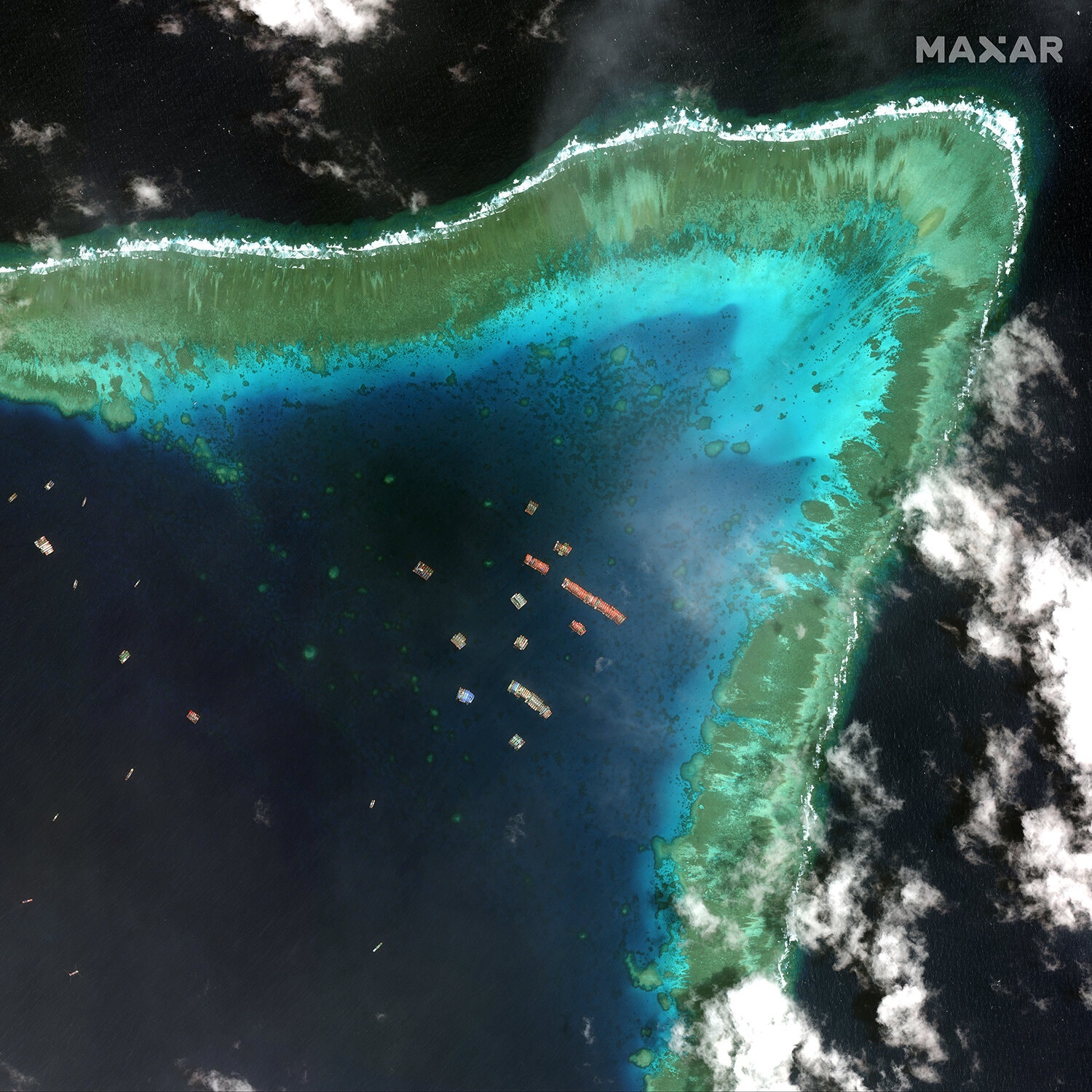 A satellite image over Whitsun Reef on March 23.
Credit...Maxar Technologies 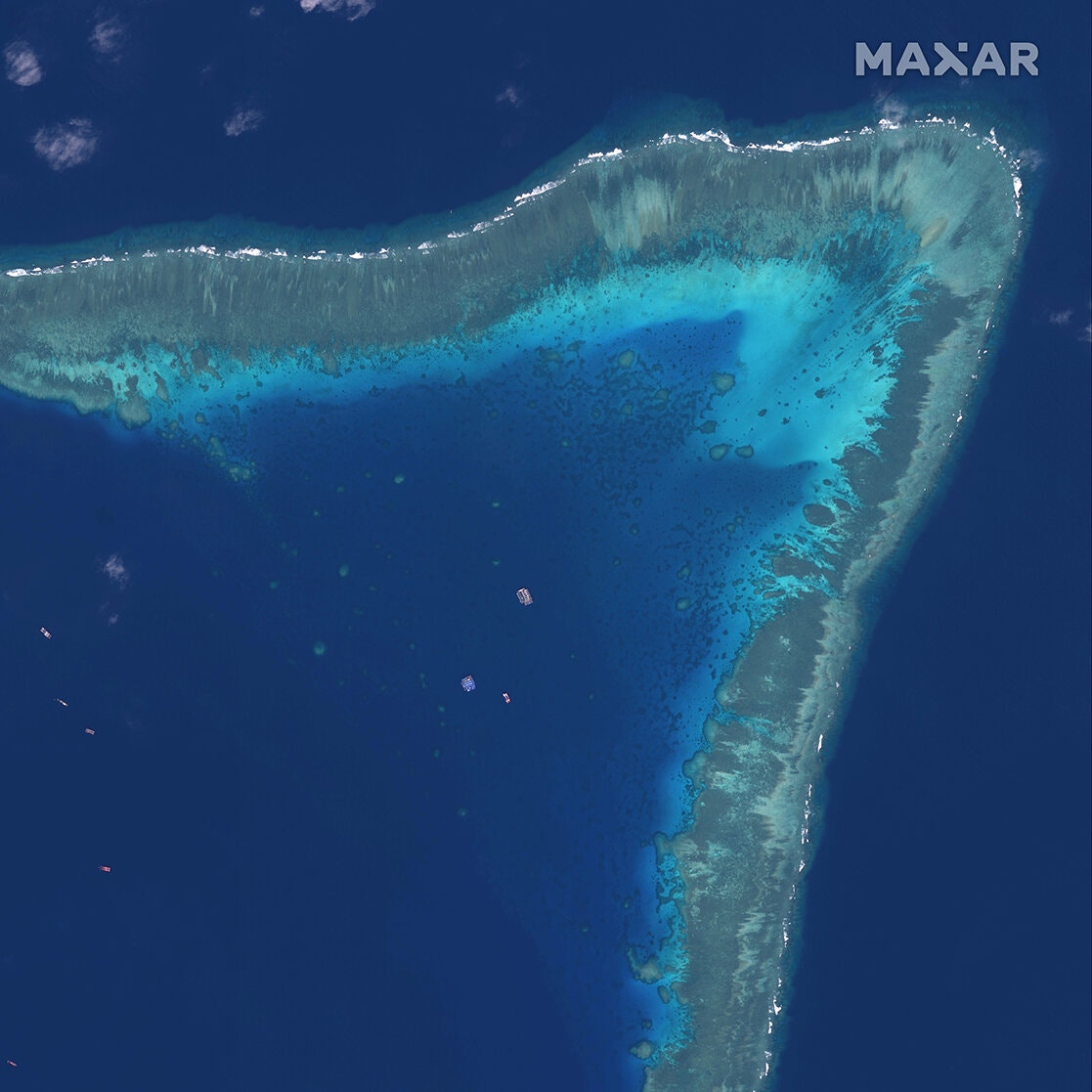 A satellite image over Whitsun Reef on March 28.
Credit...Maxar Technologies
Critics say China’s disregard for the Philippine claims reflects the failure of Mr.
Duterte’s efforts to cozy up to the Communist Party leadership in Beijing.

“People need to hear from the commander in chief himself, a coward to China but a bully to his own people,” said Mr. Duterte’s staunchest political opponent, Senator Leila de Lima.
Mr. Duterte has not publicly addressed the matter, though his spokesman suggested that quiet efforts to defuse the situation were underway.

China has brushed off the protests.
A spokeswoman for the foreign ministry, Hua Chunying, said that Chinese fishermen “have been fishing in the waters near the reef all along.”
Officials in the Philippines and experts said there was no evidence of that.

Whitsun Reef is part of an atoll known as Union Banks, about 175 nautical miles from Palawan, a Philippine island.
The Philippines, China and Vietnam each claim that the atoll lies within their country’s exclusive economic zones, but only China and Vietnam have established a regular physical presence there, giving each a secure, if not legal, advantage in asserting control.

Vietnam has occupied four islets in the atoll since the 1970s, while China has built two outposts on previously submerged reefs as part of its program, underway since 2014, to dredge up seven artificial islands.
Two of the outposts — Grierson Reef, occupied by Vietnam, and Hughes Reef, occupied by China — are less than three nautical miles apart. 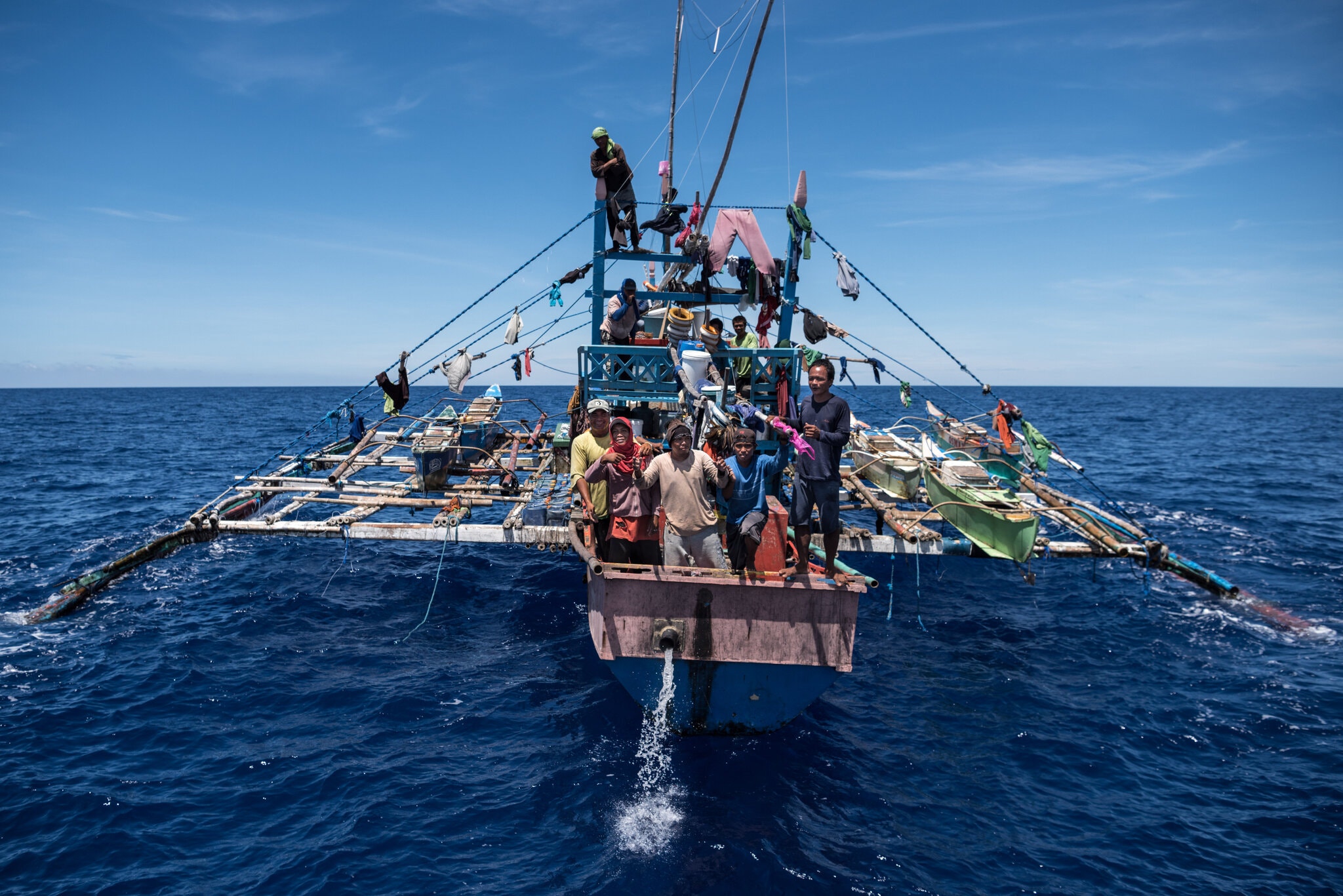 Filipino fishermen in 2016 near Scarborough Shoal, a reef that China and the Philippines both claim.
Credit...Sergey Ponomarev for The New York Times
An international tribunal convened under the United Nations Convention on the Law of the Sea ruled in 2016 that China’s expansive claim to almost all of the South China Sea had no legal basis, though it stopped short of dividing the territory among its various claimants.
China has based its claims on a “nine-dash line” drawn on maps before the establishment of the People’s Republic of China in 1949.

A Philippine patrol first reported the large number of ships at Whitsun Reef on March 7.
According to Mr. Poling, satellite photographs have shown a regular, though smaller, Chinese presence over the past year at the reef.

By March 29, 45 ships remained at Whitsun, according to a statement on Wednesday by the National Task Force-West Philippines Sea, an agency that reports to the Philippine president’s office.
The task force counted 254 ships as well as four Chinese warships that day in the Spratlys, an archipelago of more than 100 islands, cays and other outcroppings between the Philippines and Vietnam.

The task force said the 254 ships were not fishing vessels, as Beijing claimed, but part of China’s maritime militia, an ostensibly civilian force that has become an integral instrument of China’s new maritime strategy.
Many of these boats, while unarmed, are operated by reservists or others who carry out the orders of the Coast Guard and People’s Liberation Army.

“They may be doing illicit activities at night and their lingering (swarming) presence may cause irreparable damage to the marine environment,” the task force’s statement said. 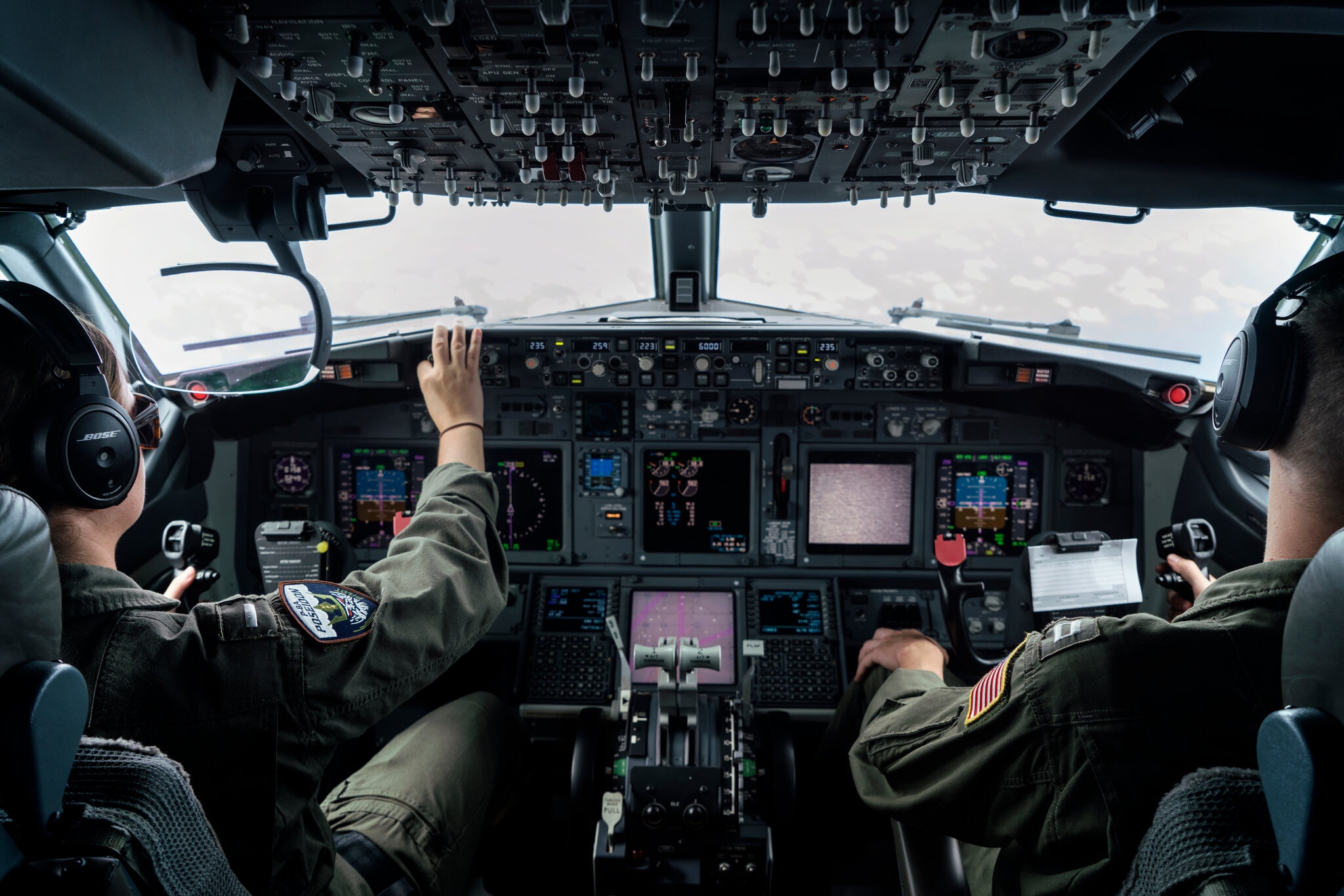 Aboard a U.S. Navy reconnaissance plane in 2018 as it observed the buildup of islands by China in the South China Sea.
Credit... Adam Dean for The New York Times
The presence of so many Chinese ships is meant to intimidate.
“By having them there, and spreading them out across these expanses of water around the reefs the others occupy, or around oil and gas fields or fishing grounds, you are steadily pushing the Filipinos and the Vietnamese out,” Mr. Poling said.

“If you’re a Filipino fisherman, you’re always getting harassed by these guys,” he said.
“They’re always maneuvering a little too close, blowing horns at you.
At some point you just give up and stop fishing there.”

Patrols and statements aside, Mr. Duterte’s government does not seem eager to confront China.
His spokesman, Harry Roque, echoed the Chinese claims that the ships were merely sheltering temporarily.

“We hope the weather clears up,” he said, “and in the spirit of friendship we are hoping that their vessels will leave the area.”

The Philippines has become increasingly dependent on Chinese trade and, as it fights the pandemic, largess.

On Monday, the first batch of Covid-19 vaccines arrived in Manila from China with great fanfare.
As many as four million doses are scheduled to arrive by May, some of them donations.
China’s ambassador, Huang Xilian, attended the vaccines’ arrival and later met with Mr. Duterte.

“China is encroaching on our maritime zone, but softening it by sending us vaccines,” said Antonio Carpio, an outspoken retired Supreme Court justice who is expert in the maritime dispute.
“It’s part of their P.R.
effort to soften the blow, but we should not fall for that.”
Links :
Posted by geogarage at 1:07 AM