A nautical tradition fades with transition from printed to electronic charts

Robert Zaremba holds an original French nautical map of Cape Cod dating to 1757 next to a NOAA map from 1986 showing Chatham before the North Beach break at the Maps of Antiquity shop in Chatham.
From Cape Cod Times by Doug Fraser

When Michael Campbell first traveled on trans-Atlantic merchant vessels in the 1980s, they still used tools similar to those on board Columbus’ ship to find the angle of sun, moon and stars and calculate the ship’s position when it was out to sea beyond the range of the radar used for coastal navigation.

At 56, Campbell doesn’t consider himself an ancient mariner, but the cadets he takes on training cruises are more comfortable with the computer screens on the ship’s bridge than the sextant, the spanner or the chart room maps.

Freshman cadet Dylan Lydell, of Jamestown, N.Y., works on a NOAA paper chart as part of a navigation lesson on the bridge simulator at Massachusetts Maritime Academy.
NOAA is beginning the process of phasing out printed nautical charts in favor of electronic chart displays, such as the one to Lyndell's right.
“Every ship I was on prior to coming to the Massachusetts Maritime Academy used a combination of paper and electronics,” Campbell said.
“We’d put our position down on paper charts and keep them up to date.”

But he knows the next generation of cadets will likely not traverse the campus with a rolled-up chart under their arm, or plot a course at sea with a spanner and pencil lines on a chart table.

“In the future, we’ll get to where those paper charts go away,” Campbell said.

That future begins this August when the National Oceanographic and Atmospheric Administration quietly turns the page on a 170-year history of printing nautical charts. 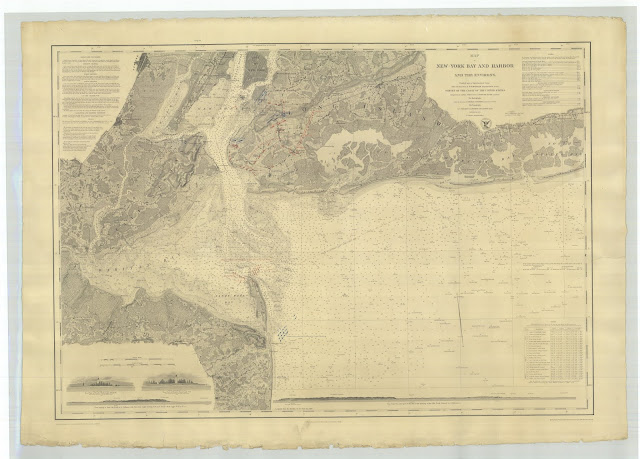 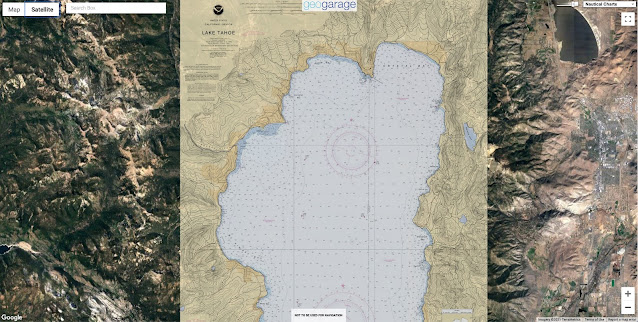 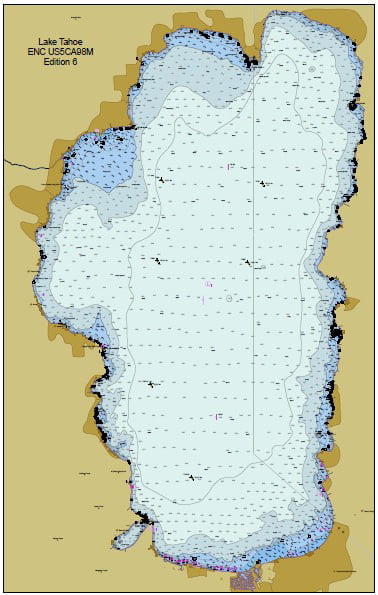 After August, NOAA’s electronic navigational chart will be the only NOAA nautical chart of the area.
Lake Tahoe’s paper chart No. 18665 the first to go

When NOAA retires Lake Tahoe’s paper chart No. 18665, it will be the first in a planned phase-out of their entire library of 1,000 paper nautical charts by 2025.

It’s part of an international movement away from the charts that have been guiding mariners since 13th Century Mediterranean seafarers committed so-called "sailing instructions" and geographical renderings to stretched calfskin, with lines between ports that corresponded to wind and compass direction.

“Do I feel nostalgic? Absolutely, but I understand the value of technology and the safety and economy it brings,” Deal said. 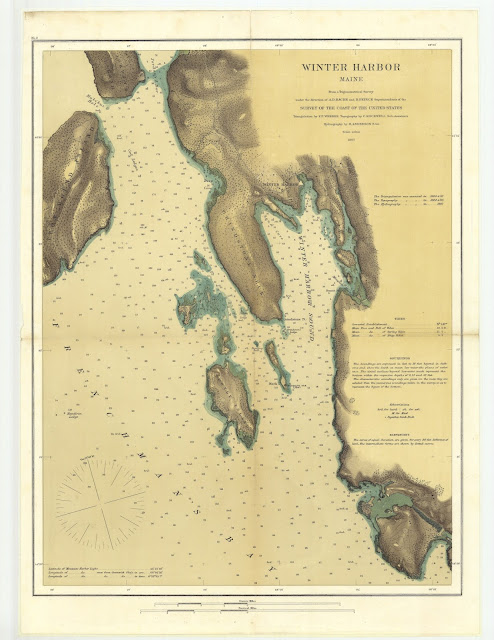 Coast Survey made a few early chart-coloring efforts.
In this 1867 chart, increased clarity of details came at a twelve-cent cost increase
Sales of paper charts on the decline

The decision is driven by twin realities.
Merchant ships like the Ever Given, which got stuck in the Suez Canal recently, have gotten progressively bigger and require much more sophisticated and up-to-date information to navigate in areas where their margin of safety has correspondingly shrunk.

“While most people are aware that keeping paper charts on board is a really good idea, I would guess that the vast majority of boaters don’t,” said Scott Zeien, owner of the Kingman Yacht Center in Cataumet.
The yacht center sells very few paper charts or chart books, he said.

Paper charts can still be ordered through private map printing services, although NOAA will no longer update the traditional charts, only the maps printed from electronic ones.
But overall, fewer and fewer people will use them.

“Electronics have made it so easy," Zeien said.
"I keep a chart on my boat, but have I looked at it twice in the last five years? Probably not.”

But maps and the information they provide have power, said Robert Zaremba, co-owner of the Chatham store Maps of Antiquity.
They were the first things pirates grabbed when they boarded a vessel because the maps opened up harbors and trade routes to sailors who might otherwise have little local knowledge.

“If you can’t envision another part of the world without going there, you don’t have any power,” Zaremba said.

He likes the idea of maps that would correlate data he’d find useful, such as the areas where drunk drivers are most often stopped or cancer hotspots.
Modern electronic mapping does just that, with overlayed layers of information available at the push of a button.

Modern merchant vessels and cruise ships almost have too much flooding the electronic screens on their bridge, and even less need for paper maps, explained David Mackey, who chairs the Marine Transportation department at Massachusetts Maritime Academy.

They use what is known as an Electronic Chart Display and Information System (ECDIS).
Computer-driven, it melds GPS information with radar, depth finders, automated ship identification beacons, known hazards, navigational aids such as buoys and lighthouses and other navigational information onto one screen.
Coastal changes and new hazards can be updated quickly without having to wait for printing.

“ECDIS has so much data on so many pages with sub-pages and sub-menus, that mariners are required to take courses in general ECDIS training,” Mackey said.

There's so much data, the successful navigator needs to find the right mix so that the screen is useful, not cluttered.
It's no longer possible to walk onto a ship’s bridge with just paper chart navigation skills, he said.

“Every device has its time to be important,” Zaremba said.

His business is selling maps and charts, but it’s purely nostalgic.
“They are not using them on their hikes or on their boats.
People are framing them and putting them up on their walls,” he said.

But the past still has its place, experts say.
“There is value in knowing the feeling and mechanics of fixing a ship’s position,” Deal said.

Deal joined the Coast Guard at 18 and spent 30 years on active duty and in the reserves.
Satellite navigation was still in its infancy and celestial navigation and paper charts were an everyday routine.
“You can stare at a computer screen, but you have to fully interpret and comprehend what the system is telling you,” he saidl.
“A commercial airliner can fly itself, but a pilot needs to understand why the plane flies because there’s always a worst-case scenario that can occur.”
S102 Demonstrator showing a piloting scenario near Farsund in Norway.
The demonstrator is created by Kongsberg Digital, and is based on Kongsberg Digital's Cogs library for 3D visualization.
That’s why the Coast Guard still requires, for now, that those seeking licenses know how to use a paper chart.
Even though the systems are supposed to have backups, computers crash and electronics fail.
When you get into trouble, you have to know where you are and how to get to where you need to be.

Mackey, who is 63, teaches electronic navigation at the maritime academy, but can appreciate the reams of yellow legal paper he went through using spherical trigonometry to calculate a fuel- and time-saving Great Circle Route across the Atlantic.

He also knows the value of having eyes on the water, noting landmarks and the seamarks.
It all feeds into a knowledge base that can help future mariners truth-test the information they are getting from computer programs.

“They are far better than I am at manipulating (the ECDIS),” he said.
But he brings what he calls the “essence of navigation.”
“How do you not just rely on what it’s spitting out,” Mackey said.
Links :
Posted by geogarage at 1:27 AM