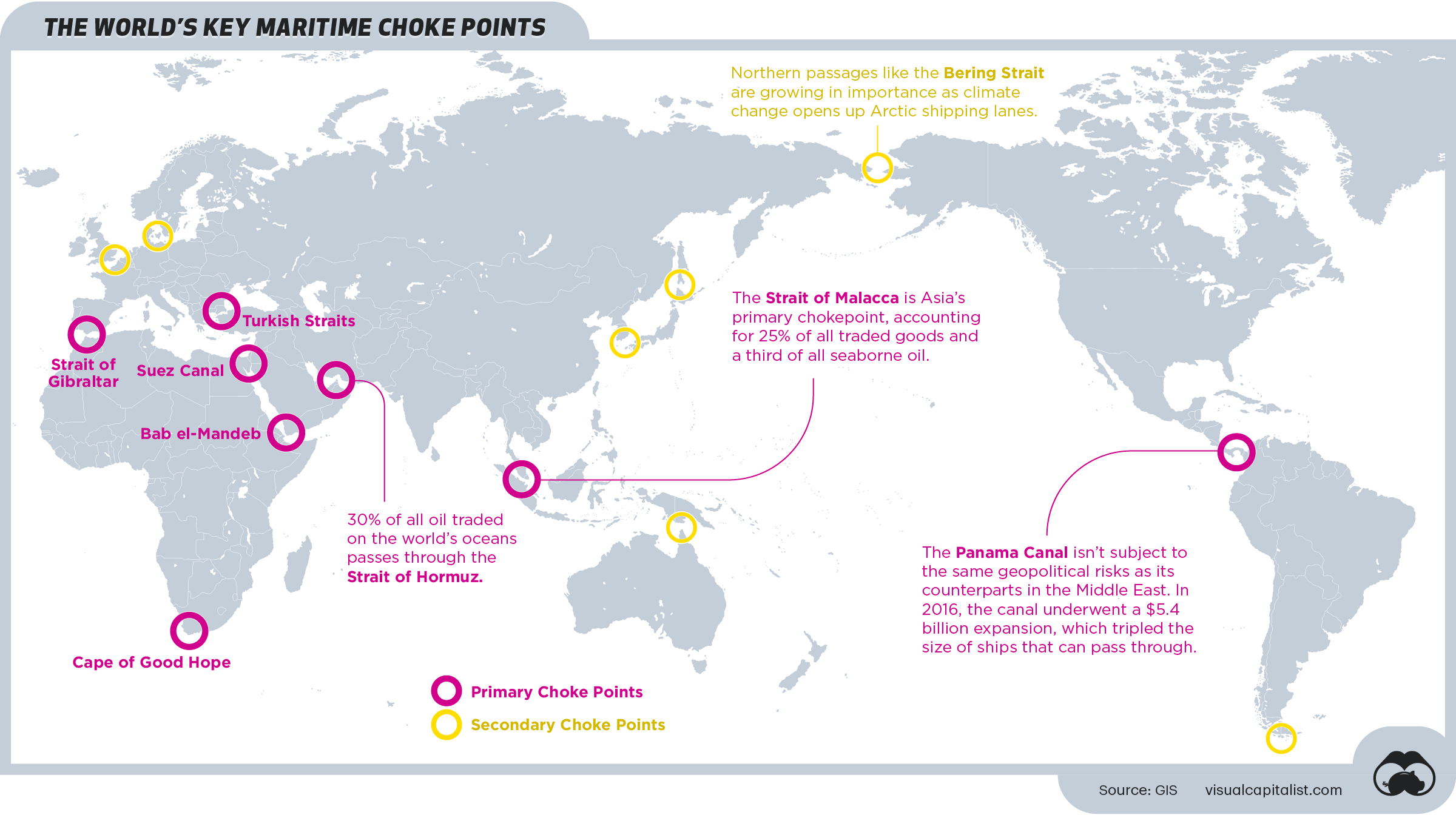 From Visual Capitalist by Carmen Ang
Maritime transport is an essential part of international trade—approximately 80% of global merchandise is shipped via sea.

Because of its importance, commercial shipping relies on strategic trade routes to move goods efficiently.

These waterways are used by thousands of vessels a year—but it’s not always smooth sailing. In fact, there are certain points along these routes that pose a risk to the whole system.

Here’s a look at the world’s most vulnerable maritime bottlenecks—also known as choke points—as identified by GIS.

What’s a Choke Point?
Choke points are strategic, narrow passages that connect two larger areas to one another.
When it comes to maritime trade, these are typically straits or canals that see high volumes of traffic because of their optimal location.

Despite their convenience, these vital points pose several risks:
The type and degree of risk varies, depending on location.
Here’s a look at some of the biggest threats, at eight of the world’s major choke points. 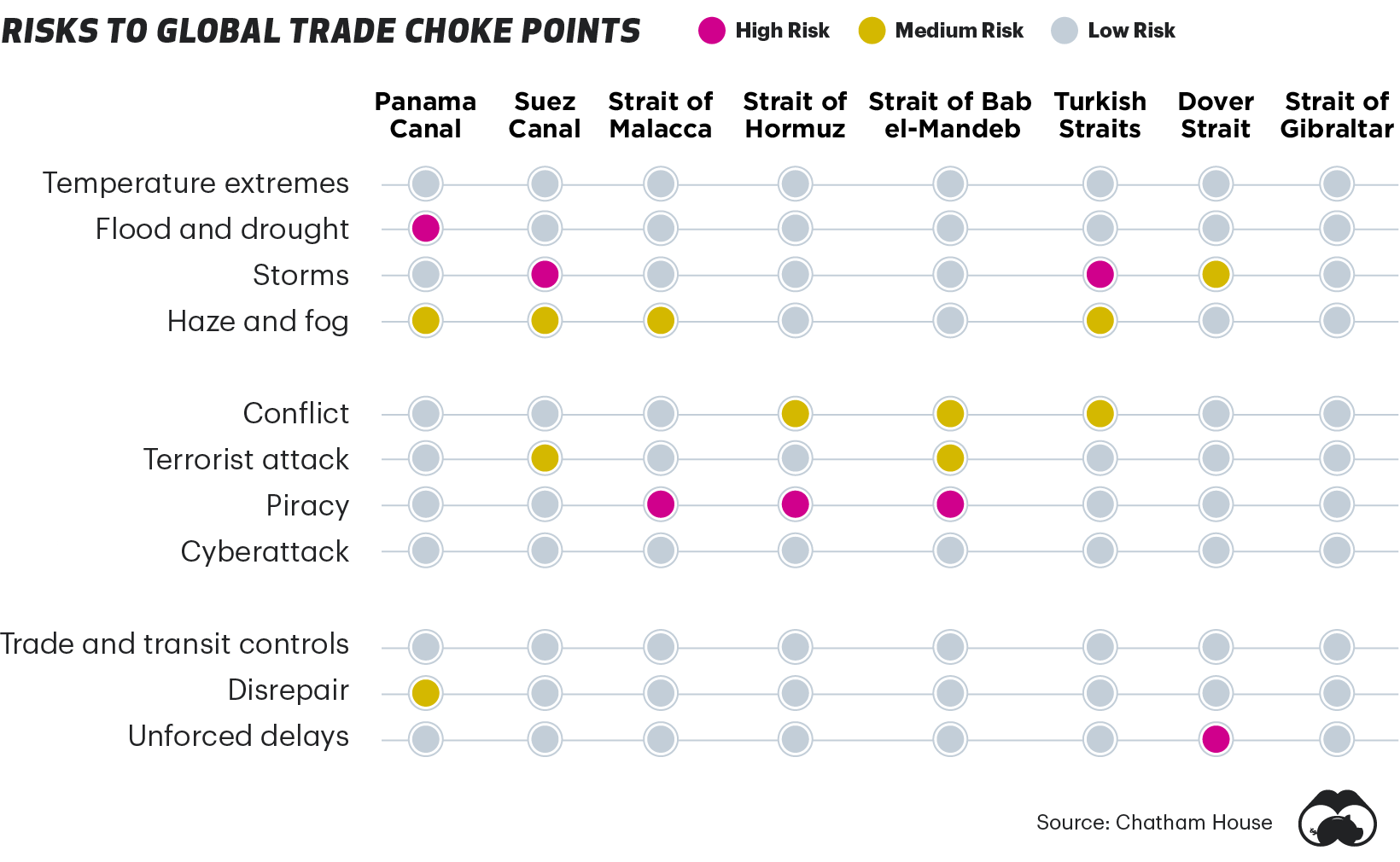 Because of their high risk, alternatives for some of these key routes have been proposed in the past—for instance, in 2013 Nicaraguan Congress approved a $40 billion dollar project proposalto build a canal that was meant to rival the Panama Canal.
As of today, it has yet to materialize.
A Closer Look: Key Maritime Choke Points
Despite their vulnerabilities, these choke points remain critical waterways that facilitate international trade.
Below, we dive into a few of the key areas to provide some context on just how important they are to global trade.
The Panama Canal
The Panama Canal is a lock-type canal that provides a shortcut for ships traveling between the Pacific and Atlantic oceans. Ships sailing between the east and west coasts of the U.S. save over 8,000 nautical miles by using the canal—which roughly shortens their trip by 21 days.

In 2019, 252 million long tons of goods were transported through the Panama Canal, which generated over $2.6 billion in tolls.
The Suez Canal
The Suez Canal is an Egyptian waterway that connects Europe to Asia.
Without this route, ships would need to sail around Africa, which would add approximately seven days to their trips.
In 2019, nearly 19,000 vessels, and 1 billion tons of cargo, traveled through the Suez Canal.

In an effort to mitigate risk, the Egyptian government embarked on a major expansion project for the canal back in 2015.
But, given the recent blockage caused by a Taiwanese container ship, it’s clear that the waterway is still vulnerable to obstruction.
The Strait of Malacca
At its smallest point, the Strait of Malacca is approximately 1.5 nautical miles, making it one of the world’s narrowest choke points.
Despite its size, it’s one of Asia’s most critical waterways, since it provides a critical connection between China, India, and Southeast Asia.
This choke point creates a risky situation for the 130,000 or so ships that visit the Port of Singapore each year.
The area is also known to have problems with piracy—in 2019, there were 30 piracy incidents, according to private information group ReCAAP ISC.
The Strait of Hormuz
Controlled by Iran, the Strait of Hormuz links the Persian Gulf to the Gulf of Oman, ultimately draining into the Arabian Sea.
It’s a primary vein for the world’s oil supply, transporting approximately 21 million barrels per day.
Historically, it’s also been a site of regional conflict.
For instance, tankers and commercial ships were attacked in that area during the Iran-Iraq war in the 1980s.
The Bab el-Mandeb Strait
The Bab el-Mandeb Strait is another primary waterway for the world’s oil and natural gas.
Nestled between Africa and the Middle East, the critical route connects the Mediterranean Sea (via the Suez Canal) to the Indian Ocean.
Like the Strait of Malacca, it’s well known as a high-risk area for pirate attacks.
In May 2020, a UK chemical tanker was attacked off the coast of Yemen–the ninth pirate attack in the area that year.
Due to the strategic nature of the region, there is a strong military presence in nearby Djibouti, including China’s first ever foreign military base.
Posted by geogarage at 1:35 AM