Companies are trying to prove that conservation, sustainable fishing and carbon sequestration are profitable.

Marty Odlin, who grew up and lives on the Maine coast, remembers what the ocean used to be like. But now, he said, “It’s like a desert and just within my lifetime.”
In the last few years, he said, he has seen lots of sea grass and many other species virtually disappear from the shoreline.

Mr. Odlin, 39, comes from a fishing family and has a passion for the history of the ocean and the coast, both of which have informed his sense of the ocean’s decline, a small part of the catastrophic deletion of marine life over the last several hundred years.

Using his training as an engineer, Mr. Odlin has decided to try to reverse that decline with his company, Running Tide, which is based in Portland.
Using a combination of robotics, sensors and machine learning, he is building an aquaculture operation that is selling oysters now and eventually clams.
He is also using that system to grow kelp, with the goal of producing enough of this seaweed to pull carbon dioxide from the atmosphere and permanently sequester it by burying it on the ocean floor, and sell carbon offsets.

The company also plans to seed oyster reefs and clam beds along the shoreline, and restore kelp forests and sea grass, to help the coastal ecosystem by bringing back biodiversity and improving water quality, among other benefits. 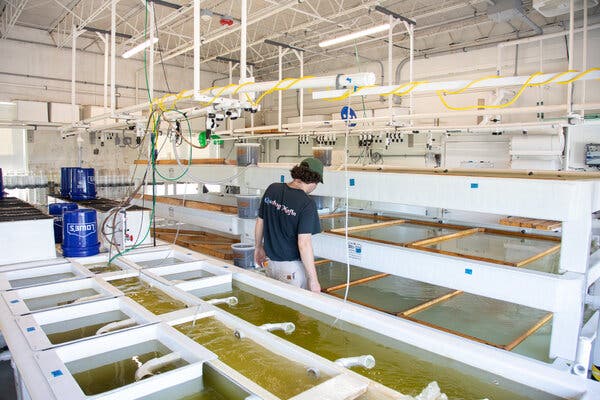 Oysters being inspected at the company Running Tide of Portland, Maine, which uses robotics, sensors and machine learning in its aquaculture operation that sells oysters and clams.
Credit...Running Tide
Mr. Odlin’s plans are one of a number of efforts in the “blue economy,” a term used to describe commercial activity on the oceans, seas and coasts.
He and others are trying to prove that ocean conservation, sustainable fishing and carbon sequestration can be good for business, especially as global shipping, aquaculture and the appetite for wild seafood increases around the world.
Mr. Odlin and his team build everything: boats, oyster floats, sensors and more, all with very high sensitivity to their environment.
They measure the amount of feed in the water and the growth rate of the various species and send that information into a database that they use to make all sorts of decisions: whether to change the feed, reposition the shellfish floats or make bigger changes about the varieties they’re growing. They also use the hard-won knowledge of commercial fishermen — there are about a dozen on staff — which Mr. Odlin said was a huge advantage.

Dan Watson, the chief executive and co-founder of SafetyNet Technologies, also has recognized the benefits of working alongside industry and demonstrating profitability.

His company builds high-tech fishing nets for trawling boats: Attached to the nets are LED lights that flash in various patterns and levels of brightness to signal emergency escape hatches (right-size holes) for those species that fishing boats aren’t trying to catch, known collectively as bycatch.

Studies have shown that LED lights can significantly reduce the amount of unwanted species that end up in fishing nets.

According to the Food and Agriculture Organization of the United Nations, about 9.1 million tons, or just over 10 percent of all of the fish caught every year, are thrown away, with nearly half coming from trawling nets.

In an era of overfishing and shifting habitats because of climate change that defy international regulations, reducing the amount of fish or other marine animals that are caught by mistake could have important consequences for the health of various populations as well as ocean biodiversity as a whole, Mr. Watson said.

“When I started all of this, I was a student, and I had the attitude of, ‘This is going to save the world and everyone should do it,’” Mr. Watson said.
“I had to turn more towards, ‘Here is the value proposition, and there is a strong financial argument for catching the right fish,’” he added.
“We can show crews, ‘Here is what you save on fuel, here is what you save on regulatory fines.’” 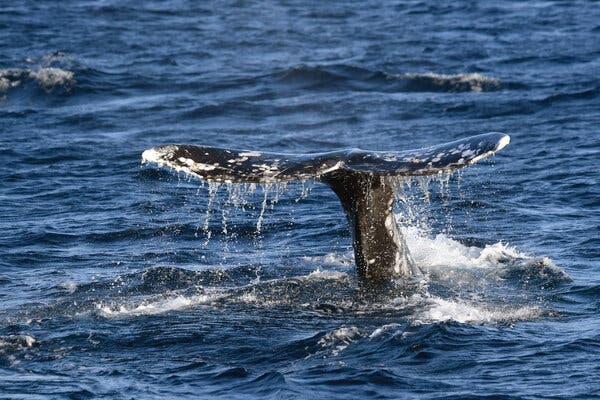 A gray whale near Long Beach, Calif. The National Oceanic and Atmospheric Administration said that a total of 22 whales died from ship strikes in 2018 and 2019.
Credit... Nick Ut/Getty Images
Others, too, see the value of working with industry groups.
Whale Safe is an initiative from the University of California Santa Barbara to help big ships avoid hitting whales as they travel through ports around Los Angeles.
The program came, in part, as a response to shipping companies asking for help, according to Douglas McCauley, a professor of ocean science at U.C.S.B.

Ship strikes, as they are known, are among the leading causes of death for whales, and 2018 and 2019 were the worst years on record for collisions on the West Coast, with 27 total resulting in 22 deaths, according to the National Oceanic and Atmospheric Administration.
Scientists estimate that the actual number of whales killed by ships could be much higher — as many as 80 a year off the West Coast, according to one study — because not all of the bodies are discovered.

Dr. McCauley helped bring together ocean technologists working at U.C.S.B. to build a near real-time detection system for whales in the Santa Barbara Channel, combining three inputs: an artificial intelligence algorithm that analyzes whale sounds, classifies them by species, and sends the data for review; a remote sensing system that predictively forecasts whale presence; and plain old citizen science, where trained whale watchers log whales into a mobile app.
“It’s not helpful if you’re only able to say, ‘Southern California is forecast to be cloudy with a chance of blue whales,” and this model forecasts at a much finer scale, Dr. McCauley said.

The system delivers the information to ships in a simplified rubric of low, medium, high and very high, so that they can slow if whales are around, which can significantly reduce the number of ship strikes. Whale Safe provides data about only this particular stretch of the California coast, but Dr. McCauley said they were planning to expand to San Francisco and possibly elsewhere in North America.

In only six months, slower speeds in the Santa Barbara and San Francisco areas helped reduce pollution from nitrous oxide by more than 530 tons and greenhouse gas emissions by 17,000 metric tons.

But saving the whales could also have huge climate benefits, Dr. McCauley said.
During their lives and when they die, whales help sequester enormous amounts of carbon dioxide in two ways.
When alive, whales supply phytoplankton (which suck up carbon dioxide) with the nutrients they need to grow.
When whales die, their bodies sink to the bottom of the ocean and over time become part of the marine sediment layer, where they can sequester the carbon dioxide they have accumulated during their life span, an average of 33 tons for a great whale species, keeping it out of the atmosphere for hundreds or thousands of years. 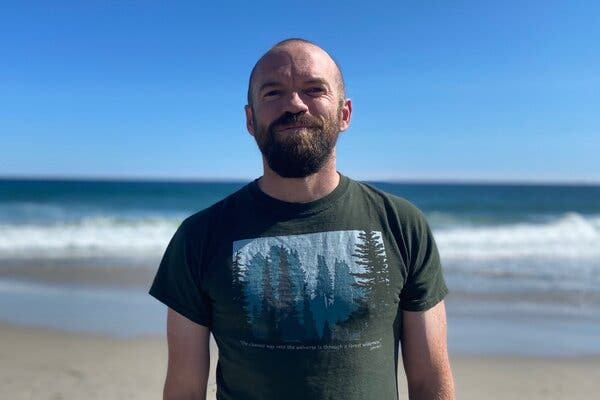 Marty Odlin and his company, Running Tide, are trying to reverse the decline of marine life.
Along with the oysters and clams, Running Tide is growing kelp, with the goal of its pulling carbon dioxide from the atmosphere and burying it on the ocean floor.
Credit...Running Tide
Any of these projects require a more hands-on approach to saving the ocean and a more deliberate overlap of business and conservation, which have historically been at odds, said Mr. Odlin, the founder of Running Tide.
“We have to take a more active role in solving the problem that we’re seeing,” he said.
“And how do you take a more active role? The moral imperative is that you have to build something at the scale of the problem.”
Otherwise, he said, “generations in front of us are not going to forgive us.”
“We still have a chance right now, so I’m working as hard as I can.”
Links :
Posted by geogarage at 1:19 AM