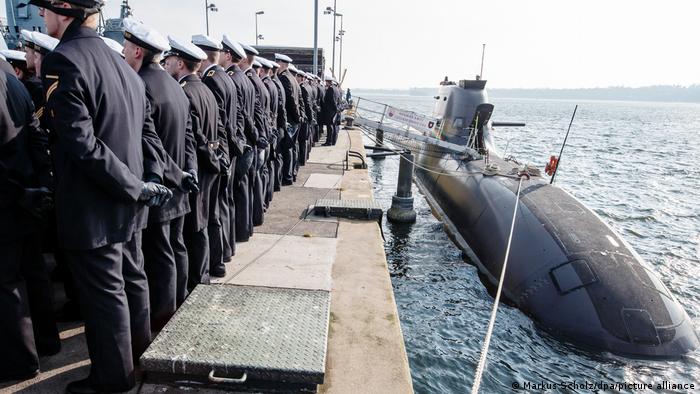 According to the newspaper Bild am Sonntag, German military submarines and warships (about 100 units) are equipped with navigation devices developed by a Russian company. Berlin began to cooperate with the Russian company "Transas" in 2005.
From DW

A report that German submarines are navigating the globe with Russian hardware has sparked security concerns.
The newspaper Bild claims that the equipment is "open" to cyber sabotage and even "full loss of operability."

A navigation system of Russian origin called Navi-Sailor 4100 has been installed on at least 100 vessels operated by Germany's military, the Bundestag, including submarines, since 2005, according to the mass-market newspaper Bild am Sonntag.

The navigation devices were developed by Transas, a company founded in St. Petersburg in 1990. Although it was purchased in 2018 by the Finnish firm Wartsila, the defense division remained in Russian hands.

The Bild report claims that the system's data encryption does not comply with military security standards, in an apparent reference to NATO, of which Germany is a member.
"During a worst-case cyberattack, navigation data could be hacked and the ship could fully lose operability,"

Used widely on civilian ships, the Navi-Sailor system was fitted on about 100 German navy ships in 2005, during the chancellorship of the Social Democrat Gerhard Schröder, Bild reports.
He is currently the chairman of the board of directors of the Russian company Gazprom's Nord Stream 2 Baltic Sea pipeline project.

Subsequent governments, Bild reports, also decided to install the navigation system on two German submarines: the U35 and U36, launched in 2015 and 2016, respectively.

These German-built 212A-class submarines, billed as highly maneuverable and quiet and elusive for long periods under water, use a mix of hydrogen cell, diesel and battery propulsion and are fitted with six torpedo tubes.

Bild reported that its query to the German Defense Ministry (BMVg) on whether the Transas system was vulnerable to hacking elicited the reply that "the government is making great efforts to ensure the IT, cyber and crypto-media security in operational areas of the BMVg."

Wartsila's website says the Transas subsidiary provides 35% of electronic chart systems used by world shipping and ports, and 45% of world simulation equipment, typically used for training.
"Marine onboard equipment & data services are used on more than 13,000 commercial vessels and patrol boats of naval and Coast Guard fleets from over 100 nations," according to Wartsila.
Greens demand explanation

Tobias Lindner, the top Bundestag representative for the opposition Greens on the German parliament's defense committee, voiced alarm following Bild's report.
"The Bundeswehr must ensure that the navy's navigation software does not represent a security leak.
The ministry must quickly explain why software from a manufacturer in NATO countries is not being used," Lindner said.

On a similar issue of technology sensitivities, on Tuesday the government of NATO member Norway blocked the sale of Rolls-Royce's Norwegian offshoot, Bergen Engines, to Russia's TMH Group.

Such engines and technology would have been of "great military importance to Russia" but would "clearly be contrary to the best interests of the Norwegian and allied security policy," according to the government.

TMH Group is a privately owned company headquartered in Russia that makes locomotives and rail equipment.
Links :
Posted by geogarage at 1:18 AM