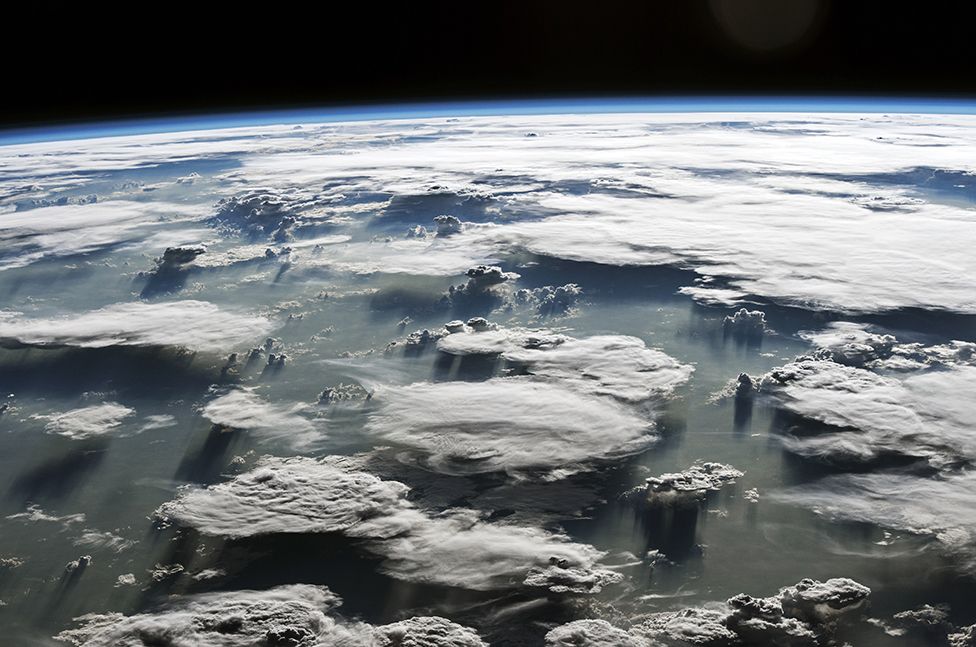 Cumulonimbus incus: The anvil shape forms when the rising cloud reaches the tropopause
From BBC by Jonathan Amos

We've all seen those majestic anvil storm clouds that form on a hot summer's day, but what do you think is the temperature right at the very top?

It's very cold, obviously; at high altitude it is well below freezing.
But would you be surprised to learn it is sometimes below even -100C?

Indeed, scientists have just published research showing the top of one tropical storm cloud system in 2018 reached -111C.
This is very likely a record low temperature.
It was seen on 29 December that year, just south of the equator in the western Pacific.
The measurement was made by a passing American satellite, Noaa-20.

When a powerful upward draft reaches the top of the lower atmosphere, or troposphere, it will normally flatten and spread out to form that classic anvil shape.

But if the storm is very energetic, the upward movement of air can punch through the troposphere's ceiling, the tropopause, to keep on rising into the stratosphere, the next layer up in the atmosphere.
In the 2018 event, the cloud top was at about 20.5km in altitude. 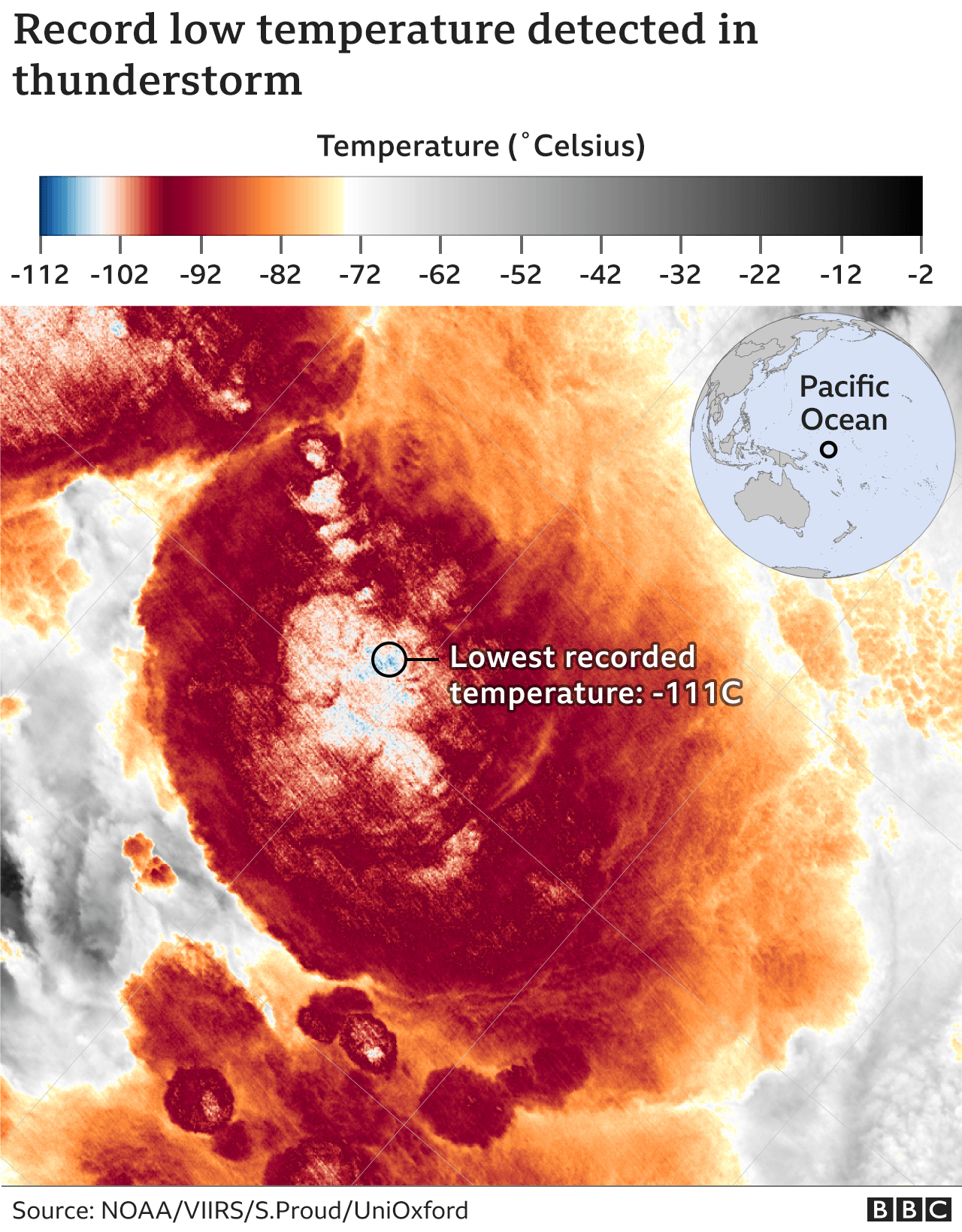 "Overshooting tops are reasonably common. We get them over the UK as well, sometimes - like last August when we had a number of massive storms. But this was a very big overshoot.
Normally, an overshooting top cools by about 7C for every kilometre it goes above the tropopause; and this one was about 13C or 14C cooler than the tropopause - so, a pretty big overshoot," he told BBC News. 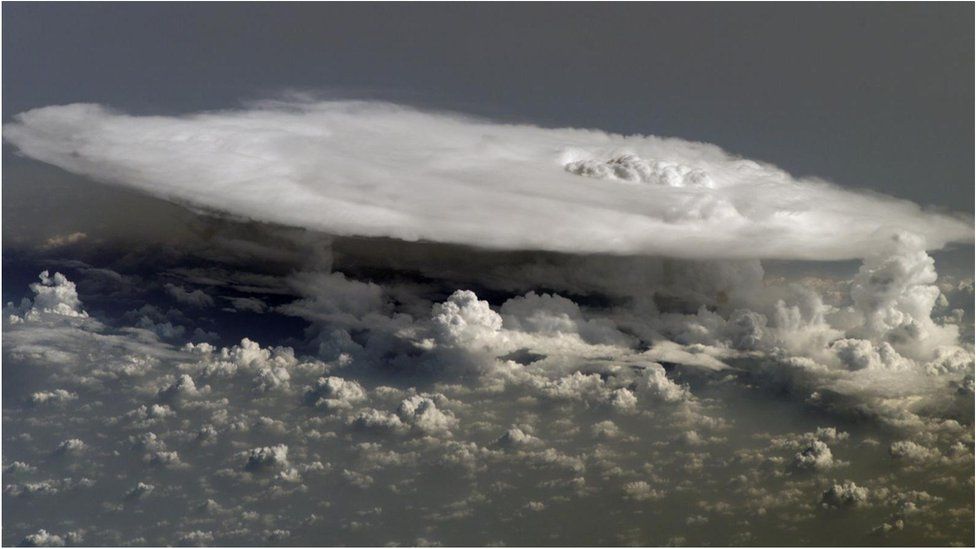 An example of an overshooting top: See the area of unevenness bursting through the flat surface
Dr Proud and Scott Bachmeier, a research meteorologist at the University of Wisconsin-Madison, US, report the event in a paper in the journal Geophysical Research Letters.

They describe the contributing factors.
Although big storms in that part of the Pacific are frequent around the December-January timeframe, this one seemed to get an extra boost.

In part, this came from some very warm ocean water in the region, but there was help too from a phenomenon meteorologists refer to as the Madden-Julian Oscillation.
The MJO is an eastwards-moving zone of winds that can accentuate wet and dry weather.

What's noteworthy, however, is the hint in the long-term data that these super-cold thunderstorms may be increasing in frequency.

There have been as many such events across the globe in the past three years as there were in the 13 years before that.
That's relevant as, in general, the colder the storm, the more likely it is to produce hazardous weather, such as lightning and flooding.
"The storm we report on was in the middle of nowhere, and just as well," says Dr Proud.
"If you'd been there you would have got drenched and very probably a load of hail on your head as well - and a lot of lightning.
"Over the last 20 years, it seems these super-cold thunderstorms are becoming a little bit more common.
It's interesting that in this part of the world, the tropopause is actually getting warmer, so we might expect to see warmer clouds, not colder clouds, which likely means we're seeing more extreme storms as we're getting even bigger overshoots than we used to." 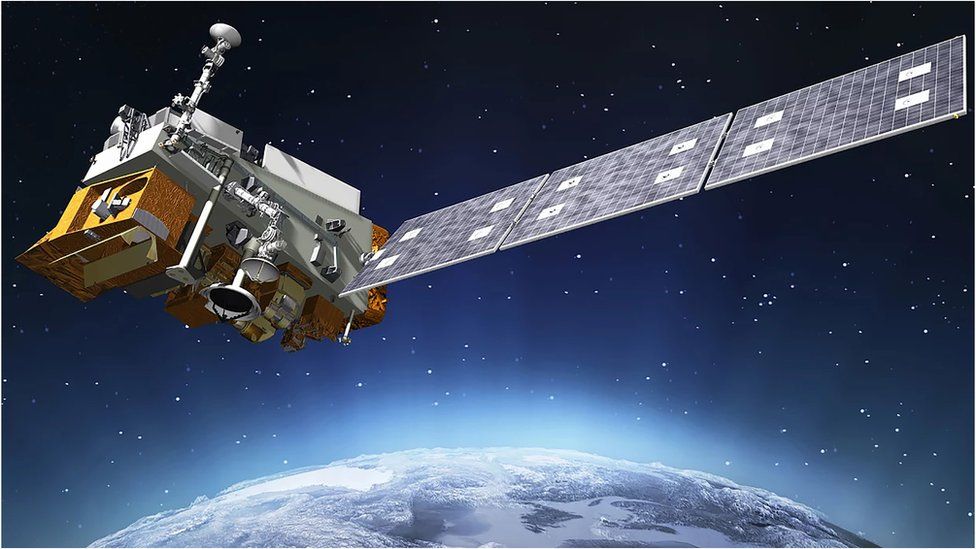 IMAGE COPYRIGHTBALL AEROSPACE
Artwork: Noaa-20 is an American low-orbiting satellite that feeds data into weather forecasts
The meteorological agencies are aware that not all the satellite sensors they fly today are capable of measuring the extreme low temperatures recorded by Noaa-20’s Visible Infrared Imaging Radiometer (Viirs).
Improved capability is therefore necessary, especially since the American spacecraft on that day probably didn’t capture the absolute low temperature reached in the cloud top.

It flew over at three o’clock and the peak of activity was about half-four.
Links :
Posted by geogarage at 1:47 AM