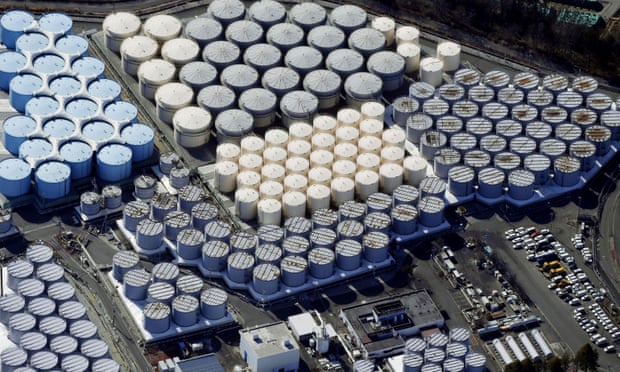 The storage tanks for treated water at the tsunami-crippled Fukushima nuclear power plant.
They will be full by the second half of 2022.
Photograph: Kyodo/Reuters

Japan has announced it will dump 1m tonnes of contaminated water into the ocean, sparking controversy

Japan’s decision to release more than 1m tonnes of treated radioactive water from the stricken Fukushima nuclear plant into the sea has sparked controversy inside and outside the country.
Here are some questions and answers about the plan, which is expected to take decades to complete.
What is the processed water?

Since the 2011 nuclear disaster, radioactive water has accumulated at the plant, including liquid used for cooling, and rain and groundwater that has seeped in.

An extensive pumping and filtration system known as Alps (advanced liquid processing system) extracts tonnes of newly contaminated water each day and filters out most radioactive elements.
The plant operator, Tepco, has built more than 1,000 tanks to hold some 1.25m tonnes of processed water at the site but they will be full by the second half of 2022.

The Alps process removes most of the radioactive isotopes to levels below international safety guidelines for nuclear plant waste water.

But it cannot remove some, including tritium, a radioactive isotope of hydrogen that experts say is only harmful to humans in very large doses.

The half-life of tritium – the time needed for one half the atoms of a radioactive isotope to decay – is 12.3 years.
In humans, it has an estimated biological half-life of seven to 10 days.
How will it be released?

Japan’s government has backed a plan to dilute the processed water and release it into the sea.

The government says the process meets international standards, and it has been endorsed by the International Atomic Energy Agency.
“Releasing into the ocean is done elsewhere,” IAEA’s director general, Rafael Mariano Grossi, has said. “It’s not something new. There is no scandal here.”

The release is not likely to begin for at least two years and will take decades.

A government spokesman, Katsunobo Kato, said the dilution would reduce tritium levels to well below standards set domestically and by the World Health Organization for drinking water, with IAEA supervision.

Why is it controversial?

Environmental groups like Greenpeace, which opposes nuclear power, say radioactive materials like carbon-14 that remain in the water can “be easily concentrated in the food chain”.

They allege that accumulated doses over time could damage DNA, and want to see the water stored until technology is developed to improve filtration.

Local fishing communities worry that years of work to convince consumers that Fukushima’s seafood is safe will be wiped out by the release.

“The message from the government that the water is safe is not reaching the public, that’s the huge problem,” an official with the association of Fukushima fishermen unions told Agence France-Presse.

The government says radioactive elements in the water are far below international standards, pointing out that waste water is regularly discharged from nuclear plants elsewhere.

Even releasing all the stored water in a single year would produce “no more than one-thousandth the exposure impact of natural radiation in Japan,” the foreign ministry said in a reply to a UN report.

For food, Japan nationally sets a standard of no more than 100 becquerels of radioactivity per kilogram (Bq/kg), compared with 1,250 Bq/kg in the EU and 1,200 in the US.

But for Fukushima produce, the level is set even lower, at just 50 Bq/kg, in an attempt to win consumer trust. Hundreds of thousands of food items have been tested in the region since 2011.
What do scientists say?

Michiaki Kai, an expert on radiation risk assessment at Japan’s Oita University of Nursing and Health Sciences, said it was important to control the dilution and volume of released water.
But “there is consensus among scientists that the impact on health is minuscule”, he told AFP.
Still, “it can’t be said the risk is zero, which is what causes controversy”.

Geraldine Thomas, chair of molecular pathology at Imperial College London and an expert on radiation, said tritium “does not pose a health risk at all – and particularly so when you factor in the dilution factor of the Pacific Ocean”.
She said carbon-14 was also not a health risk, arguing that chemical contaminants in seawater like mercury should concern consumers more “than anything that comes from the Fukushima site”.
On eating Fukushima seafood, “I would have no hesitation whatsoever,” she added.
Links :
Posted by geogarage at 1:49 AM