In the oceans, the volume is rising as never before 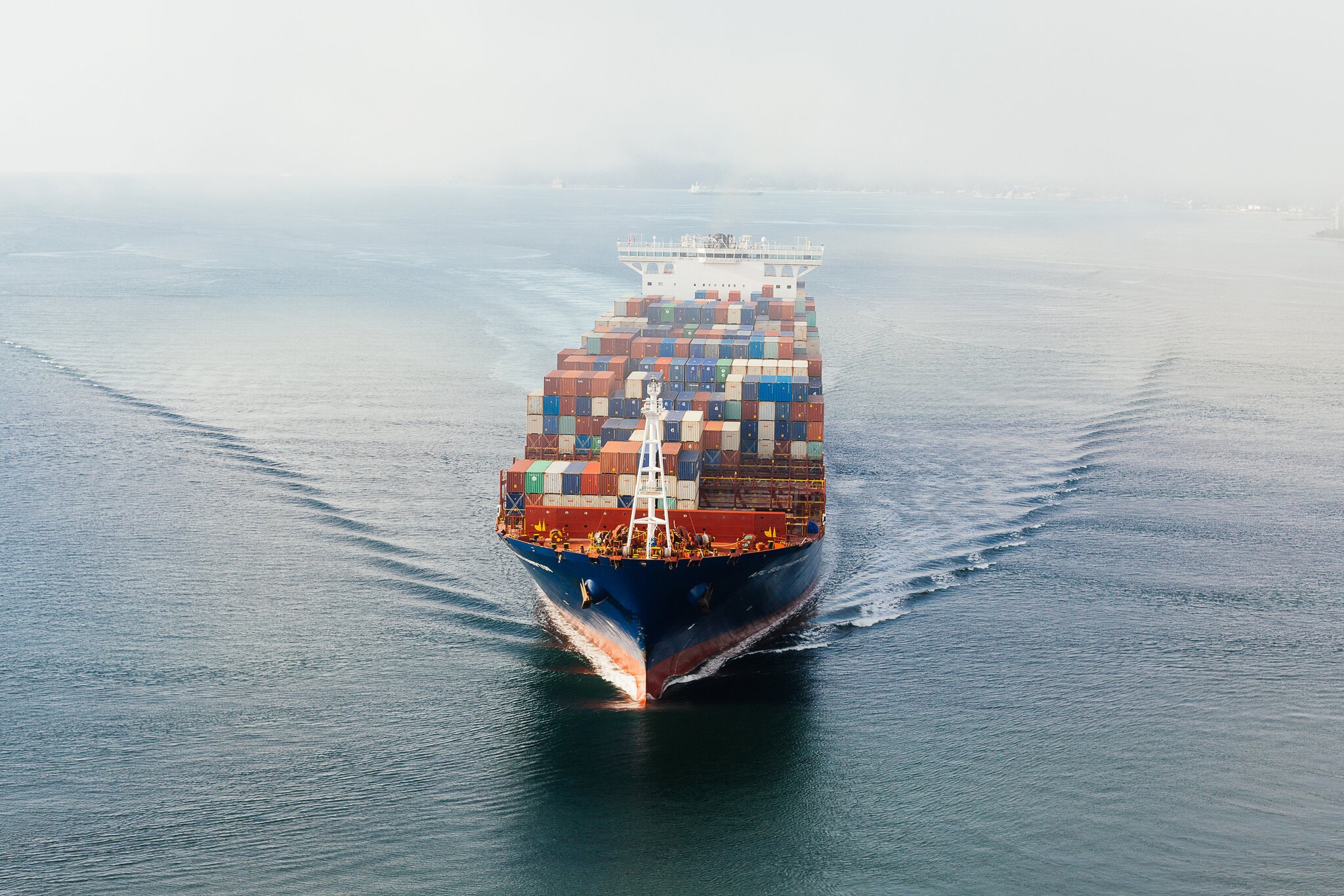 Cargo on its way to the port of Vancouver in British Columbia.
Credit...Alana Paterson for The New York Times
From NYTimes by Sabrina Imbler

A new review of the scientific literature confirms that anthropogenic noise is becoming unbearable for undersea life.

Although clown fish are conceived on coral reefs, they spend the first part of their lives as larvae drifting in the open ocean.
The fish are not yet orange, striped or even capable of swimming.
They are still plankton, a term that comes from the Greek word for “wanderer,” and wander they do, drifting at the mercy of the currents in an oceanic rumspringa.

When the baby clown fish grow big enough to swim against the tide, they high-tail it home.
The fish can’t see the reef, but they can hear its snapping, grunting, gurgling, popping and croaking.
These noises make up the soundscape of a healthy reef, and larval fish rely on these soundscapes to find their way back to the reefs, where they will spend the rest of their lives — that is, if they can hear them.

But humans — and their ships, seismic surveys, air guns, pile drivers, dynamite fishing, drilling platforms, speedboats and even surfing — have made the ocean an unbearably noisy place for marine life, according to a sweeping review of the prevalence and intensity of the impacts of anthropogenic ocean noise published on Thursday in the journal Science.
The paper, a collaboration among 25 authors from across the globe and various fields of marine acoustics, is the largest synthesis of evidence on the effects of oceanic noise pollution.

“They hit the nail on the head,” said Kerri Seger, a senior scientist at Applied Ocean Sciences who was not involved with the research.
“By the third page, I was like, ‘I’m going to send this to my students.’”

Anthropogenic noise often drowns out the natural soundscapes, putting marine life under immense stress.
In the case of baby clown fish, the noise can even doom them to wander the seas without direction, unable to find their way home.

“The cycle is broken,” said Carlos Duarte, a marine ecologist at the King Abdullah University of Science and Technology in Saudi Arabia and the lead author on the paper.
“The soundtrack of home is now hard to hear, and in many cases has disappeared.”

Drowning out the signals 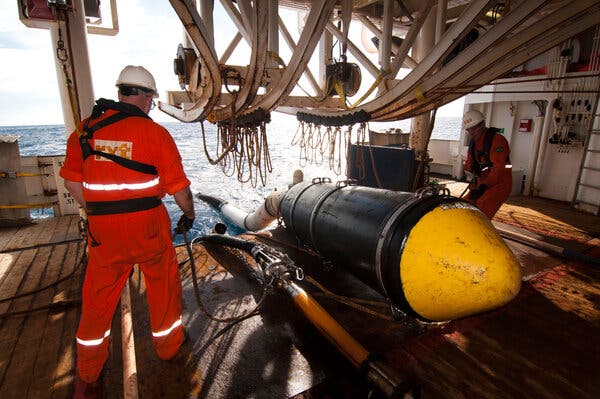 ImageSeismic air guns on a seismic vessel in waters off Brazil.
Credit...Leo Francini/Alamy
In the ocean, visual cues disappear after tens of yards, and chemical cues dissipate after hundreds of yards.
But sound can travel thousands of miles and link animals across oceanic basins and in darkness, Dr.
Duarte said.
As a result, many marine species are impeccably adapted to detect and communicate with sound.
Dolphins call one another by unique names.
Toadfish hum.
Bearded seals trill.
Whales sing.

Scientists have been aware of underwater anthropogenic noise, and how far it propagates, for around a century, according to Christine Erbe, the director of the Center for Marine Science and Technology at Curtin University in Perth, Australia, and an author on the paper.
But early research on how noise might affect marine life focused on how individual large animals responded to temporary noise sources, such as a whale taking a detour around oil rigs during its migration.

The new study maps out how underwater noise affects countless groups of marine life, including zooplankton and jellyfish.
“The extent of the problem of noise pollution has only recently dawned on us,” Dr. Erbe wrote in an email.

The idea for the paper came to Dr. Duarte seven years ago.
He had been aware of the importance of ocean sound for much of his long career as an ecologist, but he felt that the issue was not recognized on a global scale.
Dr. Duarte found that the scientific community that focused on ocean soundscapes was relatively small and siloed, with marine mammal vocalizations in one corner, and underwater seismic activity, acoustic tomography and policymakers in other, distant corners.
“We’ve all been on our little gold rushes,” said Steve Simpson, a marine biologist at the University of Exeter in England and an author on the paper.

Dr. Duarte wanted to bring together the various corners to synthesize all the evidence they had gathered into a single conversation; maybe something this grand would finally result in policy changes.

The authors screened more than 10,000 papers to ensure they captured every tendril of marine acoustics research from the past few decades, according to Dr. Simpson.
Patterns quickly emerged demonstrating the detrimental effects that noise has on almost all marine life.
“With all that research, you realize you know more than you think you know,” he said. 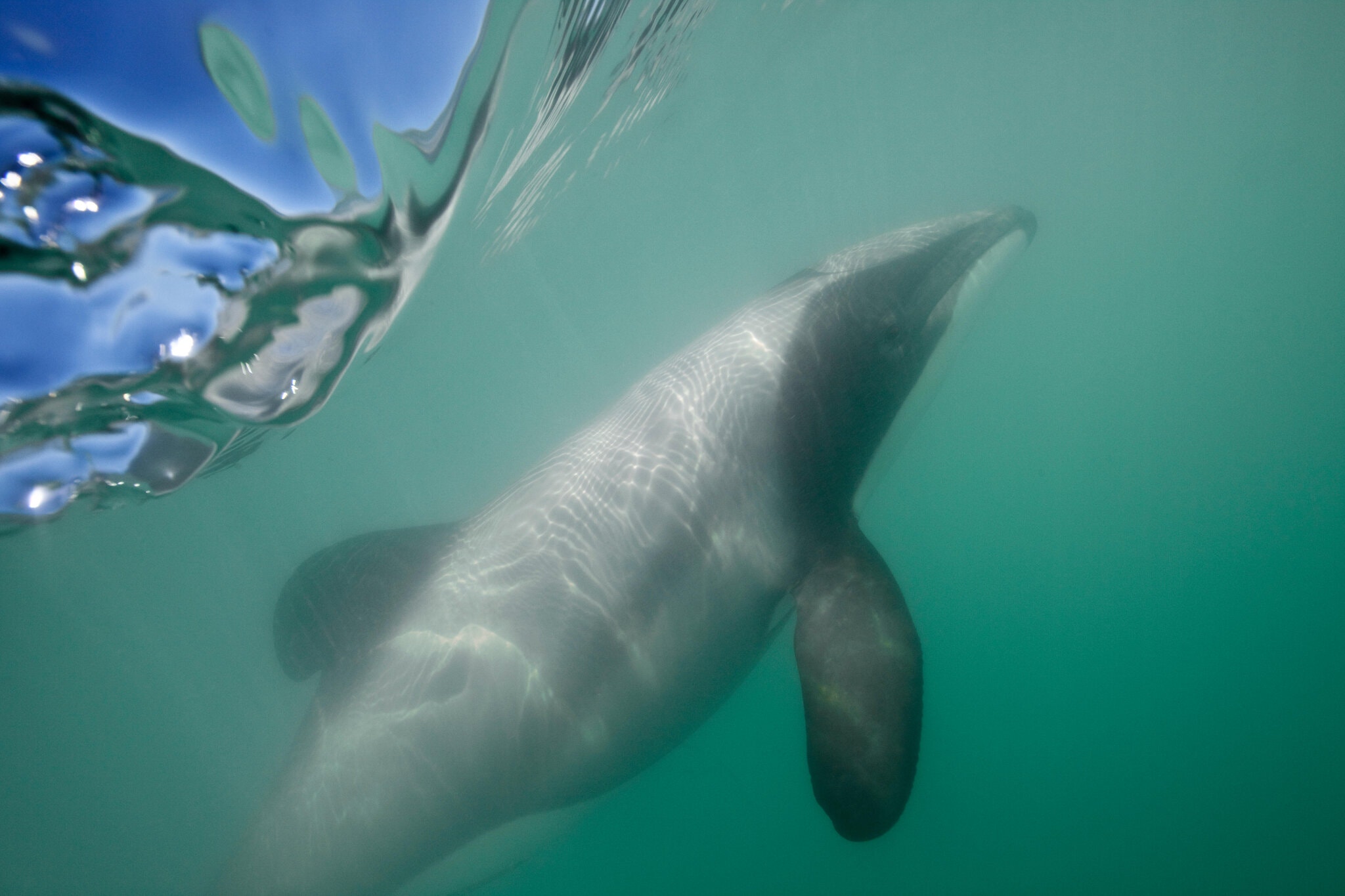 The endangered Maui dolphin is bound to a specific biogeographic range and cannot relocate to quieter waters.
Credit...Richard Robinson/Nature Picture Library, via Alamy
Dr. Simpson has studied underwater bioacoustics — how fish and marine invertebrates perceive their environment and communicate through sound — for 20 years.
Out in the field, he became accustomed to waiting for a passing ship to rumble by before going back to work studying the fish.
“I realized, ‘Oh wait, these fish experience ships coming by every day,’” he said.

Marine life can adapt to noise pollution by swimming, crawling or oozing away from it, which means some animals are more successful than others.
Whales can learn to skirt busy shipping lanes and fish can dodge the thrum of an approaching fishing vessel, but benthic creatures like slow-moving sea cucumbers have little recourse.

If the noise settles in more permanently, some animals simply leave for good.
When acoustic harassment devices were installed to deter seals from preying on salmon farms in the Broughton Archipelago in British Columbia, killer whale populations declined significantly until the devices were removed, according to a 2002 study.

These forced evacuations reduce population sizes as more animals give up territory and compete for the same pools of resources.
And certain species that are bound to limited biogeographic ranges, such as the endangered Maui dolphin, have nowhere else to go.
“Animals can’t avoid the sound because it’s everywhere,” Dr. Duarte said.

Even temporary sounds can cause chronic hearing damage in the sea creatures unlucky enough to be caught in the acoustic wake.
Both fish and marine mammals have hair cells, sensory receptors for hearing.
Fish can regrow these cells, but marine mammals probably cannot.

Luckily, unlike greenhouse gases or chemicals, sound is a relatively controllable pollutant.
“Noise is about the easiest problem to solve in the ocean,” Dr. Simpson said.
“We know exactly what causes noise, we know where it is, and we know how to stop it.”
In search of quiet

Many solutions to anthropogenic noise pollution already exist, and are even quite simple.
“Slow down, move the shipping lane, avoid sensitive areas, change propellers,” Dr. Simpson said.
Many ships rely on propellers that cause a great deal of cavitation: Tiny bubbles form around the propeller blade and produce a horrible screeching noise.
But quieter designs exist, or are in the works.

“Propeller design is a very fast-moving technological space,” Dr. Simpson said.
Other innovations include bubble curtains, which can wrap around a pile driver and insulate the sound.

The researchers also flagged deep-sea mining as an emergent industry that could become a major source of underwater noise, and suggested that new technologies could be designed to minimize sound before commercial mining starts.

The authors hope the review connects with policymakers, who have historically ignored noise as a significant anthropogenic stressor on marine life.
The United Nations Law of the Sea B.B.N.J. agreement, a document that manages biodiversity in areas beyond national jurisdiction, does not mention noise among its list of cumulative impacts.

The U.N.’s 14th sustainable development goal, which focuses on underwater life, does not explicitly mention noise, according to Dr.
Seger of Applied Ocean Sciences.
“The U.N. had an ocean noise week where they sat down and listened to it and then went on to another topic,” she said.

The paper in Science went through three rounds of editing, the last of which occurred after Covid-19 had created many unplanned experiments: Shipping activity slowed down, the oceans fell relatively silent, and marine mammals and sharks returned to previously noisy waterways where they were rarely seen.
“Recovery can be almost immediate,” Dr. Duarte said.
Alive with sound 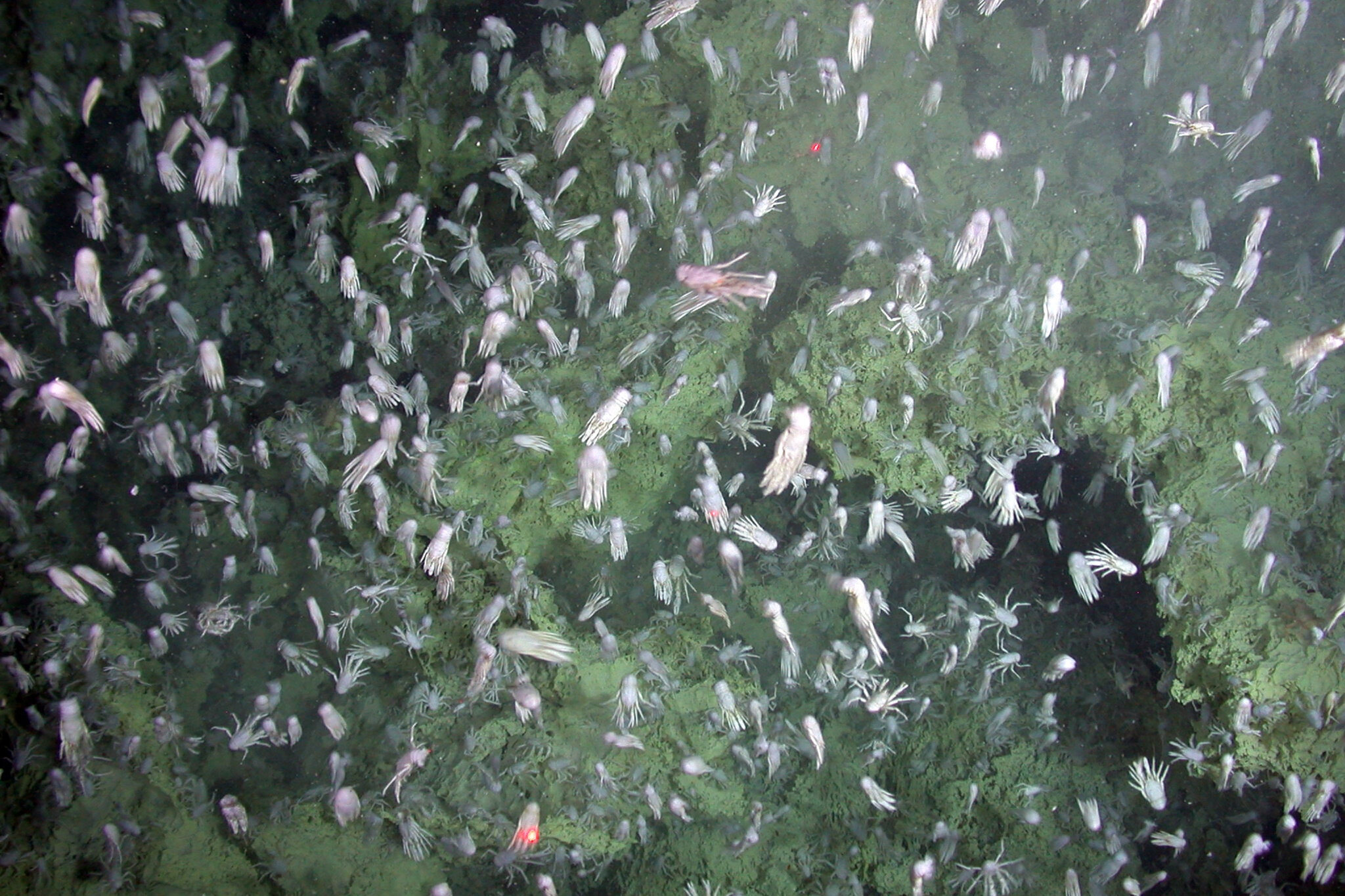 Squat lobsters on Seamont X, a submarine volcano in the Philippine Sea.
Credit...NOAA Vents Program
A healthy ocean is not a silent ocean — hail crackling into white-crested waves, glaciers thudding into water, gases burbling from hydrothermal vents, and countless creatures chittering, rasping and singing are all signs of a normal environment.
One of the 20 authors on the paper is the multimedia artist Jana Winderen, who created a six-minute audio track that shifts from a healthy ocean — the calls of bearded seals, snapping crustaceans and rain — to a disturbed ocean, with motorboats and pile driving.

A year ago, while studying invasive species in sea grass meadows in waters near Greece, Dr. Duarte was just about to come up for air when he heard a horrendous rumble above him: “a huge warship on top of me, going at full speed.”
He stayed glued to the seafloor until the navy vessel passed, careful to slow down his breathing and not deplete his tank.
Around 10 minutes later, the sound ebbed and Dr. Duarte was able to come up safely for air.
“I have sympathy for these creatures,” he said.

When warships and other anthropogenic noises cease, sea grass meadows have a soundscape entirely their own.
In the daytime, the photosynthesizing meadows generate tiny bubbles of oxygen that wobble up the water column, growing until they burst.
All together, the bubble blasts make a scintillating sound like many little bells, beckoning larval fish to come home.