The oceans are vibrating with humanity's 'background hum'

The above map shows a simulated spectrum at 100 Hz

From The Atlantic Cities (by John Metcalfe)

There are fewer and fewer places nowadays where one can escape the sound of humans.
These sanctuaries of precious quiet do not include much of the ocean, which is constantly thrumming with civilization's noise pollution.

The bulk of human-generated audio in the seas comes from large shipping vessels, according to a NOAA working group on marine noise.
For a while now the U.S. government and other concerned groups have investigated the possibly harmful impact underwater noise might have on marine life – especially cetaceans like whales and dolphins that use sound to communicate.
Thanks to one of the parties involved in that effort, we now can visualize how our massive seafaring machines are creating raucous house parties in the northern Pacific and Atlantic, in a cluster around Europe, in busy Middle Eastern shipping routes and many other regions of intense clamor.

These two maps of merchant-shipping commotion were shared by Michael Porter, a participant in the NOAA group who is also president of Heat, Light, and Sound Research in La Jolla, California.
They represent differing levels of noise in the oceans during 2006 at a depth of about 650 feet, which sound like low-frequency hummmmms that travel hundreds of kilometers.
Porter and his team assembled these models as a way to distinguish shipping noise from other background sources, such as sonar and pile driving.

this one is for 200 Hz (for the difference between these two, see Porter's explanation below

Porter took the time to answer a couple questions about this probing of the oceans' aural landscape; here's what he had to say:

What are the effects of boat noise on the ocean ecosystem? Is it mainly potential harm or harassment to animals?

There is a worry about such noise as a 'pollutant'; however, one should be very careful about jumping to that implied conclusion (that it is causing harm).
We prepared these maps originally in the context of a NOAA effort to provide the background levels against which other sources (e.g., pile-driving noise) might be compared.
We view it as a sort of background hum that you might compare to highway noise.
You will find scientists that think it's obvious that this sound harms the animals and scientists that think it's very unlikely.
Scientists, of course, are human also and not immune to hasty, emotional conclusions.
In truth we simply do not know if they are bothered by this noise field.
However, these soundscapes can help inform the research process.

The main interest here is on how it might bother animals or how other sound sources that might be even more bothersome compare to this pervasive background field.

Where are the noisiest places that you found? Are they typically near major port cities, or elsewhere?
At this stage, I don't have too much to say about the noisiest places.
The map itself answers the question fairly completely if we're talking just about ship noise: the loud places are generally near the shipping lanes.
However, we see high levels, for instance, in the Gulf of Mexico where there is a lot of seismic exploration (not shown on the shipping-noise map).
We also see high levels in areas where there is pile driving or, separately, Navy sonar exercises.
That statement should be footnoted with the observation that the measure of 'high levels' depends on the metric.
Shipping is always on; pile driving and sonar are not.

Is there any effort being made to cut down the levels of ocean noise around the world? If so, who's making it, and how?

There is a lot of popular concern about the effects of sound on the marine environment.
In particular, there was a major public outcry following the stranding of 16 whales during the Bahamas incident.
The U.S. Navy did an extensive study and concluded that their sonar was a likely cause.
There have been other incidents.
Similarly, there was a great deal of public concern following significant fish kills associated with pile driving for a bridge near San Francisco.
To provide context, one should also consider the roughly 1 million animals that are 'bycatch' in the fishing industry.
We don't have a strong position about whether this is a serious issue; we merely seek to provide information for bioacousticians and conservationist to assess the issue.

Do you know of any ports or governments that have sound-dampening programs?

The European Union has developed a Marine Strategy Framework Directive and considerations about ocean noise are part of that directive.
As a result various countries in the EU are taking steps to assess or mitigate marine noise.
I'm not intimately familiar with the U.S. process but NOAA and BOEM are closely involved in permitting of Navy exercises and seismic activities and noise studies are a major concern.
The U.S. Navy, for instance, does enormous studies to forecast 'takes' of marine mammals associated with Navy exercises.
However, the word 'take' here suggests something extreme but actually includes almost any observable effect. 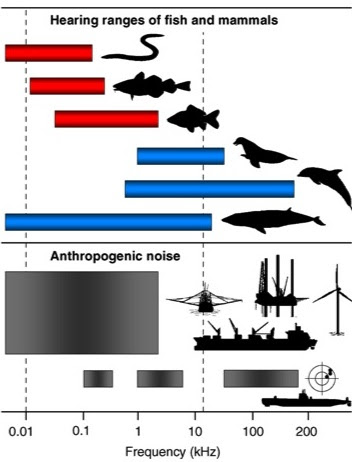 What's the difference in meaning between the 100 Hz and 200 Hz maps?

It is often a challenge to express this sort of info for a non-technical audience.
I would say that 100 Hz is a tone that would correspond to a key on the left half of a piano and 200 Hz is exactly one octave higher but still to the left of middle C (about 260 Hz) or A440 (440 Hz).
The sound level is presented in "third-octave bands" so the plot for 100 Hz is really showing the sound level that would be heard by a listener who could only hear a third of an octave around that 100 Hz tone but was deaf to notes outside of that.
This could sound like an odd way of presenting things but it allows a scientist to understand the noise in relation to a wide-variety of species of animals that may be able to hear in different bands.