The hydrography of the former Zuiderzee 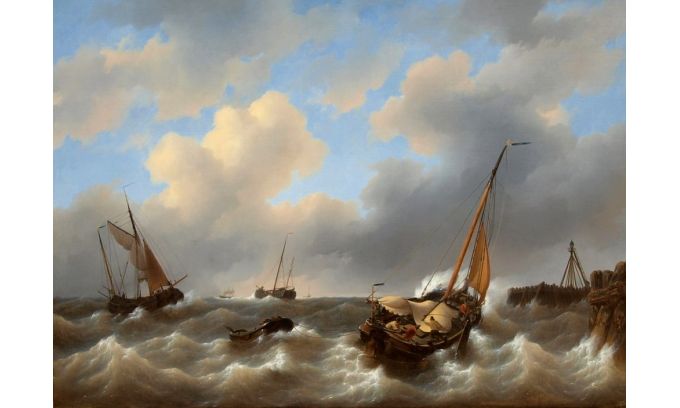 From Hydro by Wim van Wegen

The Navigational History of a Challenging Inland Sea

The 32km-long dam called the Afsluitdijk, separating what was then the Zuiderzee from the North Sea, was completed in the Netherlands in 1932.
It transformed the Zuiderzee from a large, shallow bay of the North Sea into a freshwater lake, which was renamed the IJsselmeer in a reference to the River IJssel – one of the major branches of the Rhine.
This feat of Dutch hydraulic engineering signalled the end for the Zuiderzee and its rich history.
However, evidence of that history still remains in what used to be the seabed, much of which has since been reclaimed from the water and turned into land.
This series of articles takes you on a trip back in time to explore the Zuiderzee’s past and the role of various hydrographic and geomatic techniques.
This first instalment focuses on shipping on the Zuiderzee and what it took to navigate the waters safely.

In the period known as the Dutch Golden Age, which roughly spanned the era from 1581 to the late 17th century, the Zuiderzee was a major link in the trading network that made the Dutch Republic such a formidable seafaring nation.
What is now known as the Netherlands was at the epicentre of world trade, thanks largely to the Dutch East India Company (VOC).
This private trading company – which is sometimes described as the world’s first multinational – had a monopoly on trade with the region to the east of the Cape of Good Hope.
For VOC’s merchant ships returning to ports such as Enkhuizen, Hoorn and Amsterdam laden with goods, the Zuiderzee was the last leg of their voyages on the world’s oceans. 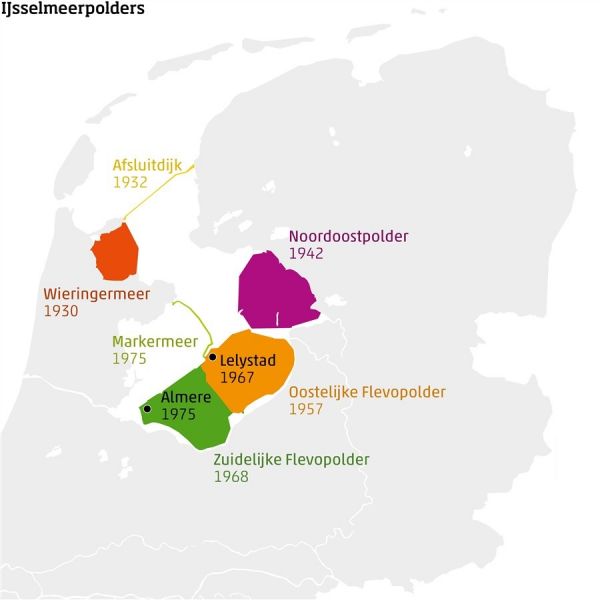 Map of the Zuiderzee works, the basis for the world’s largest land reclamation project.

Crossing the Zuiderzee was not without its risks.
The sea was renowned for its shallow depths, so navigating this key maritime route was a challenge for the captains of the day.
A ‘mud mill’, which was invented in 1575 by a ship builder from Amsterdam, was one of the few ways to keep the channels deep enough for the merchant ships.
The mud mill consisted of two flat barges with a conveyor-like construction in between that was powered by a treadmill.
In the 17th century, the treadmill was increasingly replaced by a horse-powered bucket dredger.
The mud mills could dredge to depths of up to five metres, and that was necessary because a fully loaded VOC ship returning from the Far East typically had a draft of between 3.5 and 5 metres.
Four horses were required to pull the mud mill’s drawbar, but the intensity of the work meant that the horses had to be changed over every hour.
As a result, each mud mill needed two teams of horses – while one team worked, the other recovered on board the barge in preparation for their next shift.

One of the main challenges in the Zuiderzee was the lack of current, which allowed sediment of clay and sand to form.
As a result, the ports would regularly silt up without human intervention – and that was a problem, because the Zuiderzee was a hive of activity.
Besides the huge ocean-going merchant ships, the naval vessels and the North Sea fishing boats, there were also various activities focused on the inland sea itself, such as regional passenger travel, herring fishing and domestic sea freight.
However, as the Dutch Golden Age came to an end and trade with the Far East declined, it became increasingly difficult to finance the operations to prevent sedimentation and siltation around the ports. 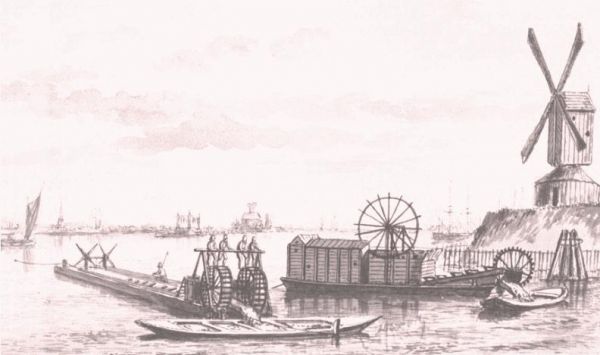 Mud mills were used to keep the Zuiderzee navigable for merchant ships.

Navigation is the process of safely guiding a ship between its point of departure and its destination, preferably via the shortest possible route.
First and foremost, the sailor needs basic knowledge, experience and accurate information – including the positioning coordinates of the departure point and destination.
It is important to know how to interpret and utilize that information in order to keep the ship on course.
Besides that, the sailor has a number of resources at his disposal, including a nautical chart which shows important data – not only depth information, but also the condition of the seabed and any hazards such as sandbanks and shallow areas.
In the case of the Zuiderzee, lighthouses, church towers and other clearly visible landmarks helped sailors to get their bearings, but to cross the challenging sea safely a range of reliable navigational aids – and above all an accurate sea map – really were a must.

The oldest known Dutch navigational aids date from the early 16th century and comprise basic charts: printed instructions and descriptions of things like nautical routes.
Many of the charts also included early land surveys: views of the coastline showing distinct features such as buildings and towers.
Additionally, navigation was sometimes based on astronomy.
Sailors used a Jacob’s staff (also known as a cross-staff, fore-staff or ballastella) to estimate the angle between the Pole Star and the horizon and hence determine the vessel’s latitude.
The Jacob’s staff continued to be used as a nautical instrument long after it fell out of favour in surveying. 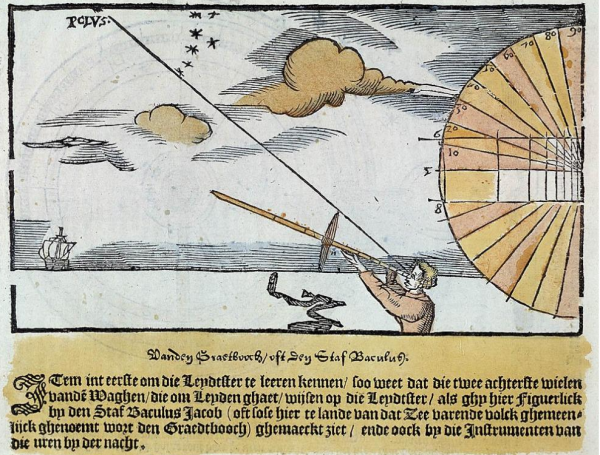 Instructions for measuring the height of the Pole Star above the horizon using a fore-staff or Jacob’s staff so that sailors could determine their position at sea.

Since the Zuiderzee was a relatively small sea, a ship was never out of sight of land for very long and so it was not necessary to navigate by the stars.
Instead, a nautical chart, a compass and a plumb line were the most important aids to help sailors navigate the coastline.
The plumb line – a long cord or rope with a lead weight attached to one end – was dropped into the water vertically and then hauled out again manually, using outstretched arms to measure the length of wet line and hence the water depth.

Maritime cartography received a major boost in the late 16th century thanks to the publication of the Spieghel der Zeevaerdt by Lucas Jansz Waghenaer, a navigating officer based at the town of Enkhuizen on the Zuiderzee coast.
His Spieghel became the prototype for the Dutch sea atlases that set the standard in maritime cartography in the 17th century.
Incidentally, even in those days, the course of the channels was marked out in shallow water using barrels, buoys and beacons.
This is apparent from the map called Carte vander Suyder Zee, for example, which was published in 1580.
It indicated the major routes across the Zuiderzee and contained information about water depths, buoyage and orientation points along the coastline.

In the shallow waters of the Zuiderzee, sailors also needed to understand the tides, which is why the Spieghel from 1584 included comprehensive tide tables for the ports as well as details of safe places to anchor.
Moreover, the strength and direction of the wind also had a huge impact and a vessel could be forced to cast anchor in adverse conditions.

In effect, the busy inland sea was a massive interchange of maritime routes.
Larger vessels had no choice but to stick to the channels and a number of maps that were specially developed for the VOC’s ships reveal just how limited the options were for big ships traversing the shallow Zuiderzee.
As a result, the channels could get crowded, such as the one connecting Amsterdam to the island of Urk.
Most ships to and from Amsterdam traversed the 'Val van Urk' - one of the deepest parts of the Zuiderzee.
These limitations for large vessels remained an issue until 1824, when the Noord-Hollands Kanaal was opened.
The canal resulted in a rapid decline in the number of big ships on the Zuiderzee.

The Zuiderzee, as depicted in the groundbreaking 'Spieghel der Zeevaerdt' sea atlas. 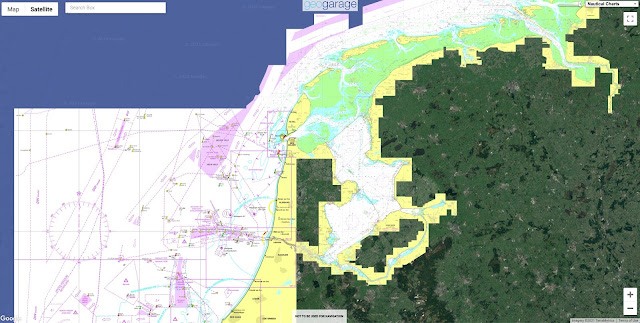 The Zuiderzee was often described as a ship graveyard.
The waters of the Zuiderzee could get very choppy in bad weather, and if the conditions worsened suddenly – such as in a storm – it was not unheard of for ships to get into trouble or even sink to the bottom of the sea.
Once there, the vessels became slowly submerged in the soft clay of the seabed and gradually covered by subsequent sediment.

Many of the shipwrecks were later discovered during excavation work to reclaim parts of the former Zuiderzee.
They were generally found to be in good condition thanks to the low-oxygen environment created by sedimentation.
In fact, the Dutch province of Flevoland, which borders the former Zuid 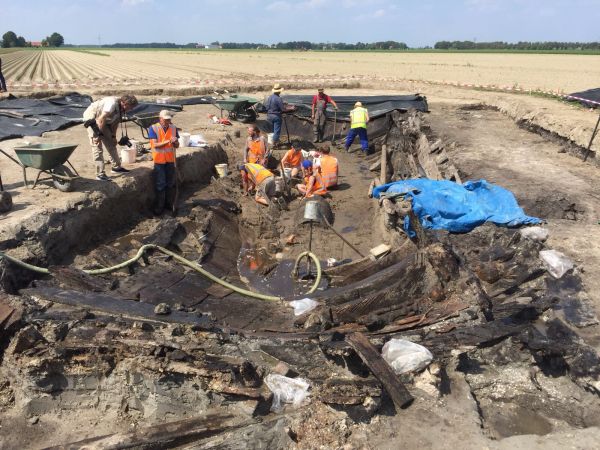 A shipwreck discovered in the Noordoostpolder, one of the polders reclaimed from the former Zuiderzee.
(Photo: Egbert Voerman)

The next instalment of this series will explore the final 150 years in the history of the Zuiderzee until its closure, the consequences of the transition from a sea to a freshwater lake (the IJsselmeer) and how the polders were created, including the world’s biggest land reclamation project: Flevoland.
Needless to say, hydrography and geomatics played a prominent role in the evolution of this region.