Four Chinese survey ships have been particularly active in the Indian Ocean.
They have been carrying out a systematic mapping of the sea floor.
This may relate to submarine warfare. AIS data from MarineTraffic.com, Analysis in partnership with Intel-lab.net
From NavalNews by H.I. Sutton

Chinese government ships have been carrying out a systematic survey in the eastern Indian ocean.
Data gathered may be particularly relevant to submarine warfare.

A Chinese Survey ship, the Xiang Yang Hong 03, is currently operating in the Indian Ocean.
It has already caused controversy, accused of ‘running dark’, without broadcasting its position in Indonesian territorial waters.
The bigger picture is that it is part of a major effort by China to systematically map the seabed across vast swath of the Indian Ocean.
Analysis of vessel tracking data shows that it is not the first time the ship has visited the area.
Nor is it the only Chinese survey ship involved.

The survey activity covers a massive area, around 500,000 square km, and is getting larger.
The inference is that, as well as conducting civilian research, these ships may be gathering information for naval planners. 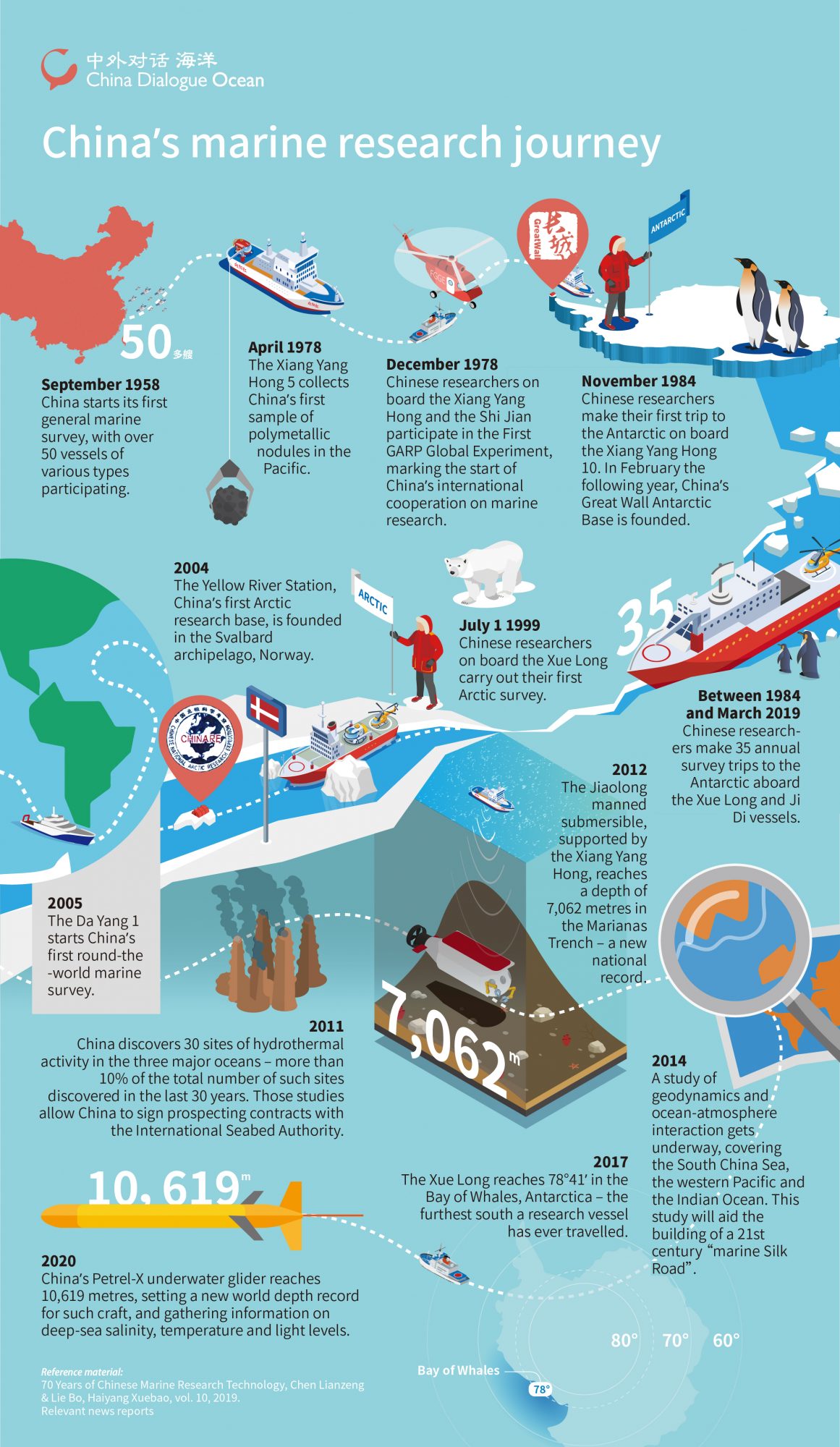 Hydrographic data is civilian-defense agnostic.
This means that it can be used for both civilian and military purposes.
The eastern Indian Ocean is likely to be of particular interest to the Chinese Navy as they expand their submarine capabilities.
The data from these surveys may help submarines navigate, or improve their chances of remaining undetected.

Four of China’s Xiang Yang Hong (‘Facing the Red Sun’) research ships have been particularly active over the past two years.
They are operated by the State Oceanic Administration.
These ships are all relatively new, being built in the last decade.
This underscores the importance that China is placing on its survey ship fleet.

Two of the ships, the Xiang Yang Hong-01 and -16 have been conducting a very thorough search pattern over the Ninetyeast Ridge, an underwater mountain range with cuts across the Indian Ocean. Their disciplined racetrack patterns are indicative of mapping the seabed.
For this they would tow a high-resolution side-scan sonar. Between them, these ships have made multiple trips with each starting where the other finished.

The reason for focusing on the Ninetyeast Ridge is unconfirmed, but it may particularly significant for submarine operations.
It creates an almost uninterrupted chain of shallow water across the ocean where submarines may be liable to detection.

#Breaking #OSINT Data found by research with @AuroraIntel & experts in their network shows the #China vessel SHI YAN 1 as reported by media in #India 460Kms east of #portblair on 31/08/2019 as a part of its mission in the #bayofbengal before being expelled by the #Indiannavy https://t.co/RI5Mlh94sG pic.twitter.com/xRlst6hxsR

Some of the survey activities, nearer to Indonesia and the Andaman and Nicobar islands, may relate to finding the US Navy’s reputed ‘fish hook’ sensor networks.
These are designed to track Chinese submarines entering the Indian Ocean.
Naturally this cannot be confirmed.

The Chinese government survey ship Xiang Yang Hong 01 at commissioning in 2016.
According to the US Naval War College, the Xiang Yang Hong 01 was commissioned for, among other things, "comprehensive observation in the field of military oceanography"
Photo Chinese Government.
In December 2019 one of the ships, the Xiang Yang Hong 06, deployed at least 12 underwater gliders in the Indian Ocean.
These long-endurance uncrewed underwater vehicles (UUVs) gather data on currents and the water properties.
Like the seabed mapping, the data is civilian-defense agnostic, and particularly relevant to submarine warfare.

The gliders deployed were Sea Wing (Haiyi) type.
This is the exact same model which has been turning up in Indonesian waters.
This raises the possibility that as well as the Xiang Yang Hong 06, other Chinese ships may be deploying the gliders.
It is difficult to determine the launch point for the gliders found in Indonesian waters.
But it is not a great leap to suggest that China has deployed more in the Eastern Indian Ocean. 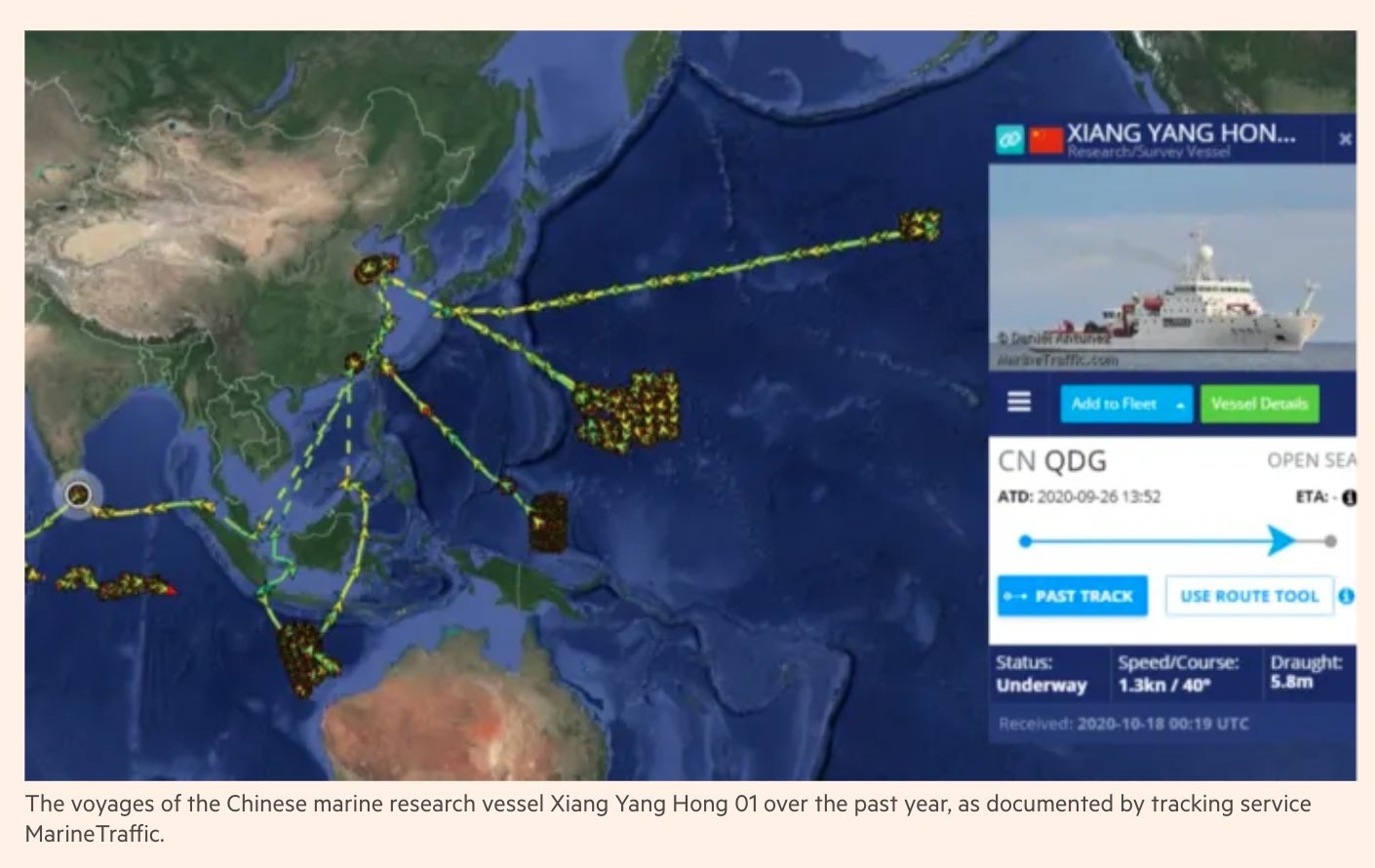