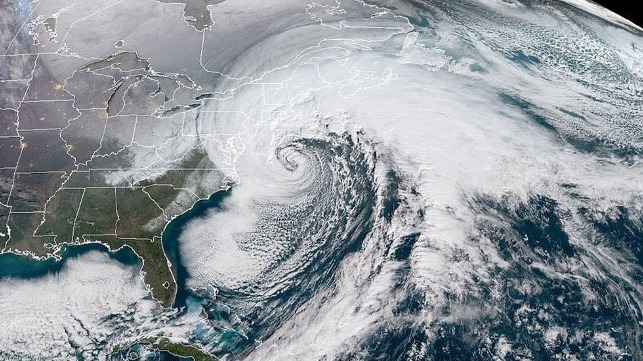 Bomb cyclone off the U.S. East Coast
A bomb cyclone was originally a slang term used to describe an extratropical cyclone that strengthened quickly—a concept similar to a rapidly intensifying tropical cyclone (e.g., hurricane).
From Maritime Executive by Ashely Petersen

Wind turbine component transports are key to the success of the U.S. offshore wind industry.

Weather strongly influences the timelines and movements of these shipments.
Both the Gulf of Mexico and the U.S. East Coast are frequently impacted by developing and strengthening “bomb cyclones,” which can significantly affect project timelines and the projected budget for component transports.
A “bomb cyclone” is defined as a mid-latitude low pressure system exhibiting rapid intensification known as explosive cyclogenesis, characterized by a rapid drop in atmospheric pressure.

There are three types of winter/spring coastal storms: Miller Type A, Miller Type B, and the Bahamas Low.
Here are some differences regarding: frequency, power, and unpredictability.

Track and Frequency
Type A is commonly known as the “Gulf and Florida Low” and is the most frequent storm that moves from the Gulf of Mexico, across northern Florida, before continuing northeastward along the U.S. East Coast (Figure 1).

Type B, the next highest frequency during the season, forms across the Midwest and continues eastward as a cyclone but is then disrupted by the Appalachian Mountains.
This results in an energy transfer to offshore the U.S. Mid-Atlantic, where rapid intensification occurs (Figure 2).
The Bahamas Low, which is the least frequent, develops near the Bahamas before lifting and strengthening northward along the U.S. East Coast (Figure 3).

Predictability
Type A is the most predictable.
The Bahamas Low is next in forecasting accuracy.
Type B is the least predictable, which becomes threatening for mariner’s offshore planning.

The below Figures 1-3 show maps of the different storm tracks and potential hazards in relation to the offshore wind energy areas on the U.S. East Coast.
Figure 4 highlights the threat of multi-directional waves and wave heights which can be produced by any type of coastal storm. 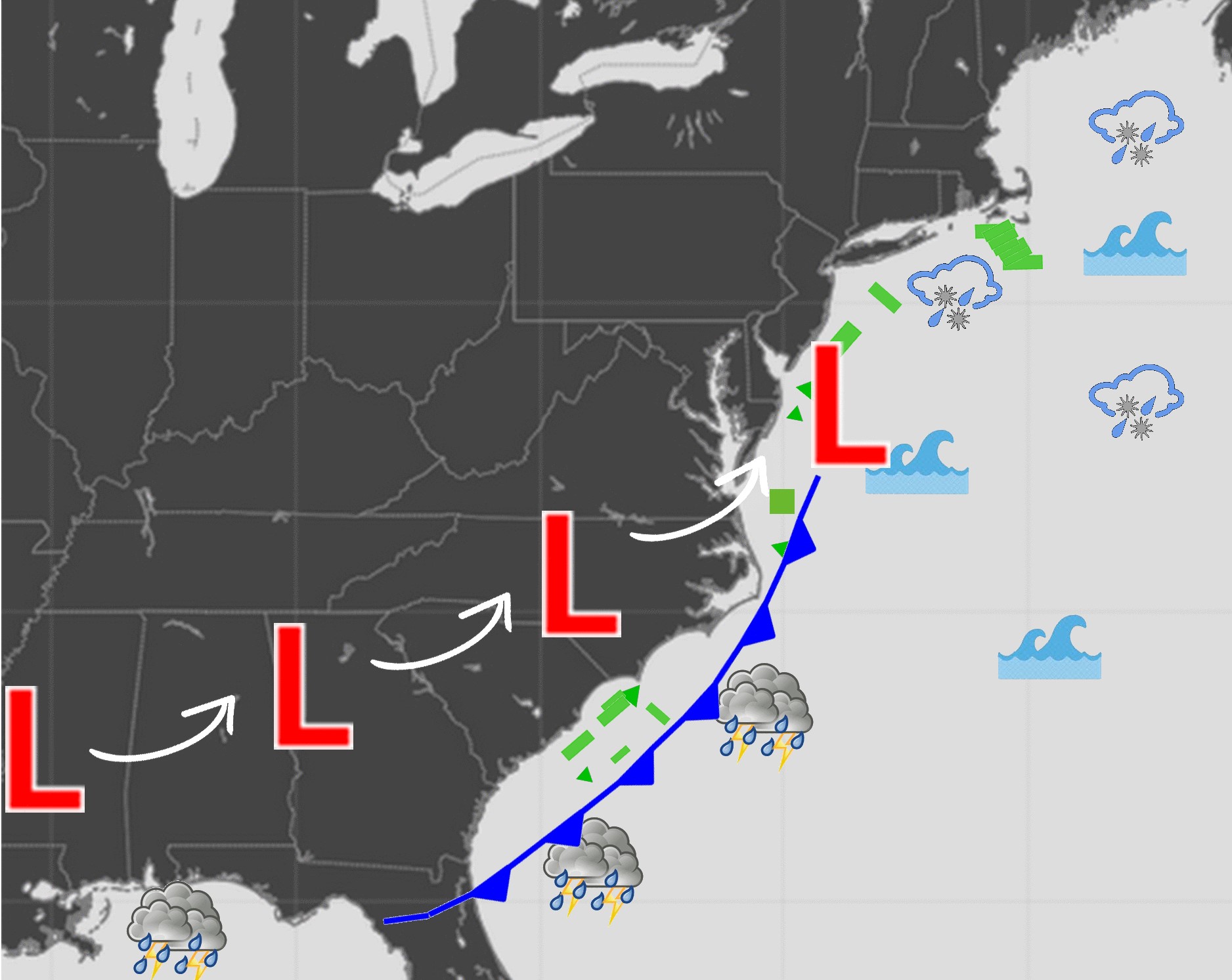 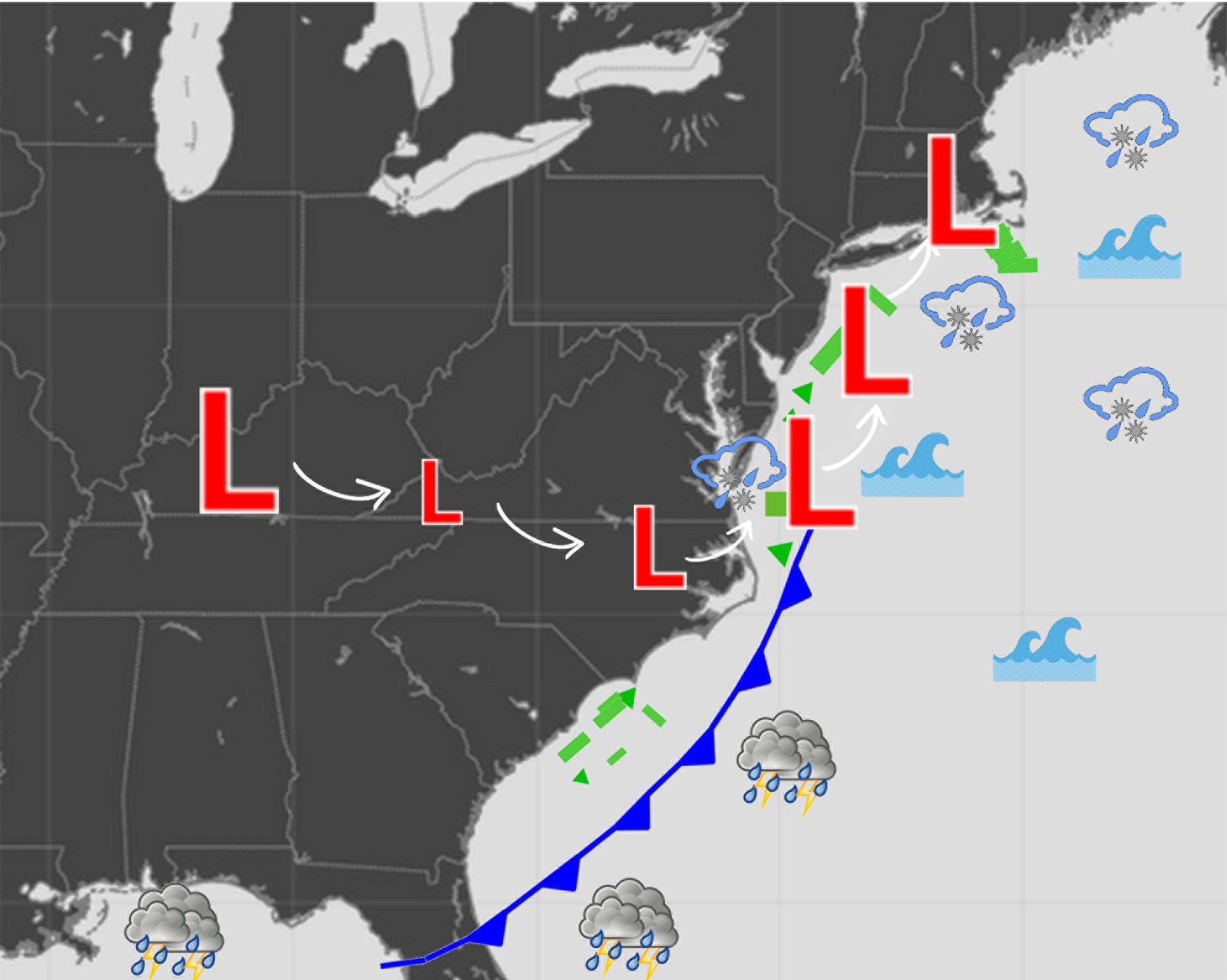 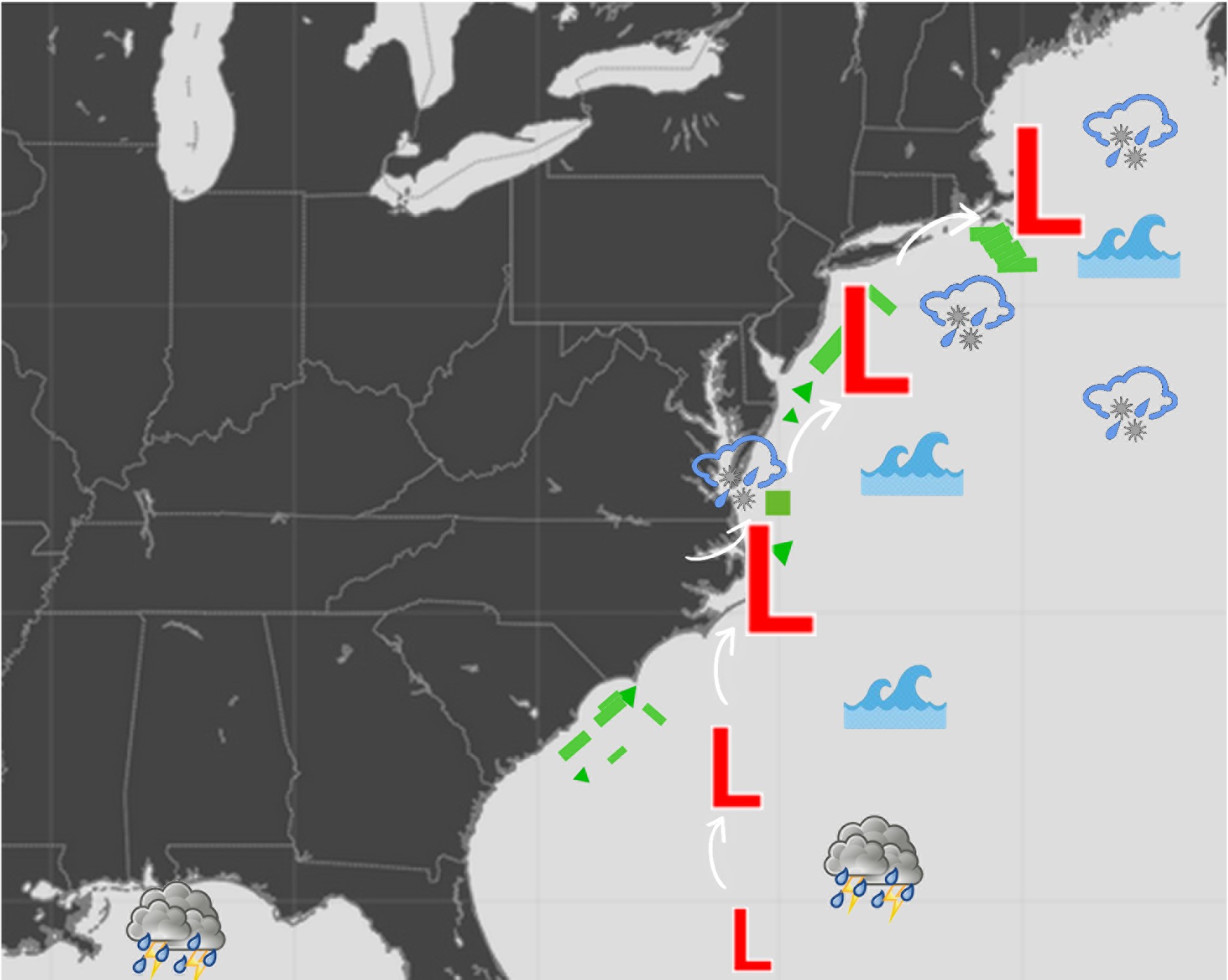 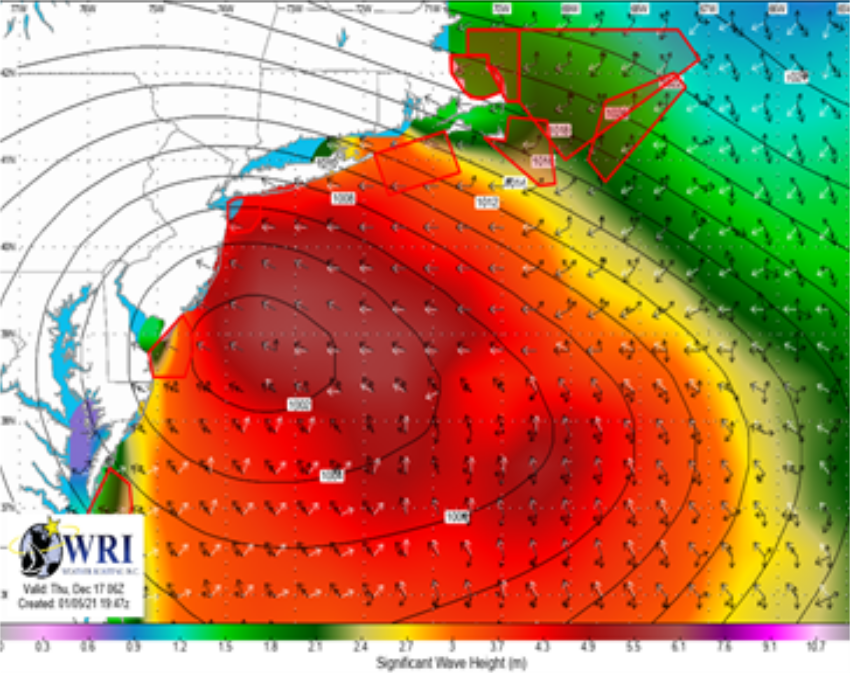 Figure 4: Multi-directional waves
With Type A being the most frequent coastal storm track, we will examine this in more detail.
The developing low pressure moves eastward across the Continental U.S while strengthening, as the associated cold front drifts east-southeastward across the Gulf of Mexico and the Southeastern U.S.
The cold front is the main culprit that will bring adverse conditions across the Gulf of Mexico, thus bringing challenging conditions for transports across this region.
As the storm shifts northeastward, it will strengthen while moving over the warm waters of the Gulf Stream, often bringing hurricane force winds along the Eastern U.S., delaying transports or creating challenging/dangerous conditions along the U.S. East Coast.
Other atmospheric phenomenon that can occur with these cyclones include:
Aside from affecting transports, these storms also impact the turbine blades themselves due to vertical wind shear and load concerns within the rotor plane.

Long term planning is key to ensuring the safe and timely delivery of the components.
Historical Weather Risk Reports and tailored Weather Downtime Reports are helpful when planning a project timeline and when setting deadlines for the delivery of components.
In combination with these reports, weather routing services in general increase the confidence in safe transport and delivery by minimizing adverse weather conditions for either Coastal or Transoceanic voyages.
Links :
Posted by geogarage at 1:41 AM