Jon Sanders: the way of the world 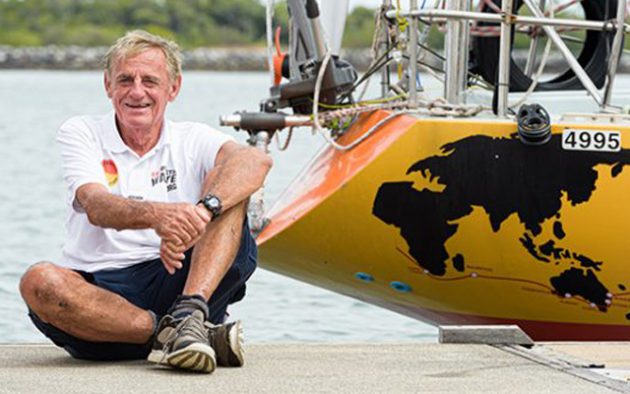 Jon Sanders is renowned for avoiding publicity. He has received many awards including the Ocean Cruising Club Lifetime Cruising Award. Credit: Paul Beutel
From Yachting Monthly by Elaine Bunting

Jon Sanders is nearing the end of his 11th solo circumnavigation around the world.
Elaine Bunting finds out what drives him to keep seeking out the solace of the sea

Who is the greatest sailor of all time?

All-knowing Google suggests it may be Sir Robin Knox-Johnston or Bernard Moitessier or Dame Ellen MacArthur.
Or maybe Robin Lee Graham or Eric Tabarly.
In fact, it proposes over 30 contenders, but nowhere among them is the name Jon Sanders.
Yet Sanders ought to be in the top rank of that list. 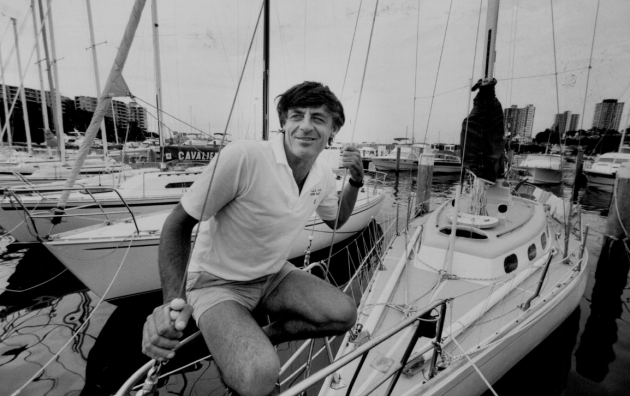 Sanders ahead of his triple circumnavigation of the world in 1986-88.
He still holds the record for the longest distance sailed non-stop by any vessel.
Credit: Getty
No one comes close to the Australian in terms of solo miles or time alone at sea.
His sailing career is simply unmatched in the cruising world.
The latest chapter was nearing its conclusion on 22 October 2020 when the 81-year-old made landfall in Bundaberg, Australia after almost 11 months into his attempt to solo circumnavigate the world for an 11th time.

Sanders’ circumnavigation in his 39ft S&S design Perie Banou II began in October 2019 in Fremantle nearly two years after a circumnavigation many (not he) had billed as his swansong.
During the voyage, tagged #NoPlasticWaste, he has collected sea water samples which he sent off to Curtin University in Western Australia to determine the quantity of microplastics in our oceans.

Sanders sailed first to Mauritius, where he stopped to reprovision and make some repairs, then Cape Town before continuing onwards to St Helena and St Maarten.
There he was halted by the COVID-19 lockdown.
In June he set free from St Maarten for the Panama Canal. 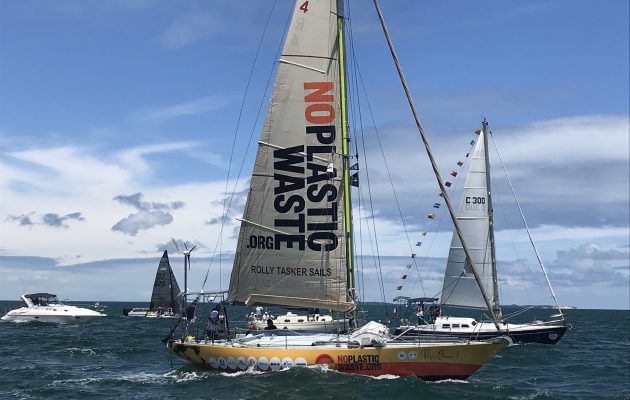 Sanders started his 11th circumnavigation of the world in October 2019, leaving from Freemantle. Credit: Rolly Tasker Sails
Then, to avoid a succession of restrictions in the Pacific he sailed over 4,000 miles direct to Tahiti and a final 3,000 miles to Bundaberg.

He kept a regular blog (jonsanders.com) so understated it can seem uneventful.

At one stage Sanders ponders that he may be ‘a bit boring’.
Maybe that is how life alone at sea looks when you’ve done so much of it.
He makes observations about what he has seen on AIS, sometimes reflections on sea birds (very few in the Tropics, except near land), running repairs, and food.

His old-school diet would have comforted Sir Francis Chichester: powdered milk and egg, tinned fruit, meatballs, rice, Nescafé. Vegemite, of course.
His sitreps say: ‘Boat and me going v v good,’ or ‘All well here’.
Any future screenwriter panning for nuggets of drama and angst will be on short rations.
The bone-dry humour could be a challenge, too.

Yet Jon Sanders has quietly set records in mind-bending quantities.
In 1982, he was the first person to sail twice round the world solo, non-stop and unassisted, on a double circumnavigation of 48,000 miles.
He was at sea for 419 days.
Four years later he set out again, this time making three circumnavigations back-to-back, again solo, non-stop and unassisted. 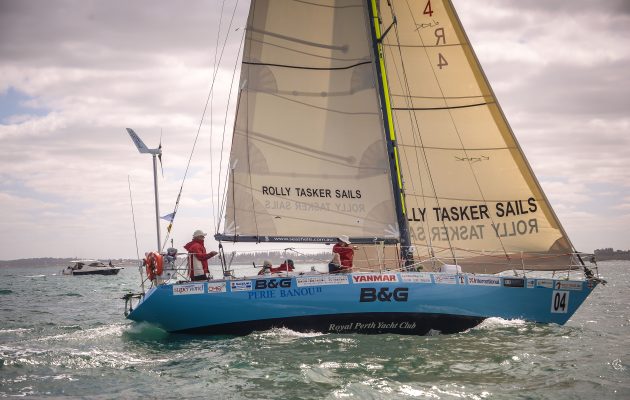 Many thought Sanders’ 10th circumnavigation would be his last, although going around the world again was never ruled out by the veteran skipper. Credit: Rolly Tasker Sails
The voyage still tops the Guinness Book of Records sailing list with the longest distance ever sailed alone continuously – 658 days and over 70,000 miles.
He has also done lots of ocean racing, including seven Sydney Hobart Races and three Cape to Rio Races.

If you were to add it all together, Jon Sanders has spent more than a tenth of his life at sea.
He might be a celebrity if he weren’t so uninterested in fame and after coming ashore again he immediately went to ground.
He did, however, speak to me before this voyage, and talked about his background and thoughts on yacht design and seamanship.
Who wants to be ordinary?

Jon Sanders was born and grew up in Western Australia.
His father was a professor of education at the University of Western Australia and his mother a teacher and novelist, who wrote 42 books under the name Lucy Walker.
At school he got into trouble for bunking off cricket and football to mess about in boats, but his mother stood up for him, saying: ‘Who wants to be ordinary? Why don’t you be original?’
After school, Sanders went to work shearing sheep.
Over the next two decades he ran a team of up to 20 men, travelling to remote stations at the head of long dirt tracks and shearing up to 40,000 sheep per station before sorting, pressing and baling the wool.
This tough life took all autumn and winter, but it left the summer free, and he could go sailing.

He and his brother, Colin, bought an S&S 34 built from the same moulds as Sir Edward Heath’s first Morning Cloud, and named her Perie Banou, after the fairy in Arabian Nights. 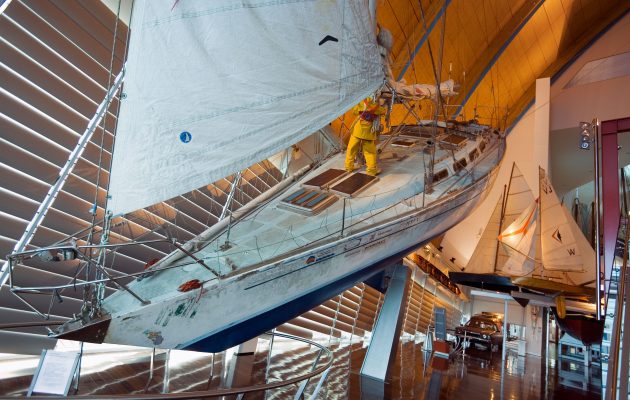 The 47ft Parry Endeavour, which Sanders sailed around the globe three times in succession, is now on display at the Western Australian Maritime Museum in Freemantle.
Credit: Ozimages/Alamy
‘I did 200- and 300-mile races and got more confident,’ he says.
‘More importantly, I was reading all these books by Sir Alec Rose and Robin Knox-Johnston and I thought: “I could do that”.’
He completed his first solo circumnavigation between 1975 and 1977, mainly through the tropics, and soon began to think of another.
In 1981 he left again in Perie Banou, this time sailing west to east via the Southern Ocean, and twice looping the Antarctic and round Cape Horn.

His worst experiences were in the Southern Ocean, he says, when breaking waves knocked him down fully, twice.
The capsizes were hard lessons that taught him never to lie ahull, as many books had recommended, and instead to trail warps or deploy a drogue.
‘Don’t read some of the old ideas, they will probably drown you,’ he warns me.
At 80 years of age, Jon Sanders AO OBE, the greatest solo-circumnavigator in history, will embark on his 11th circumnavigation of the globe.
At an age when most people are entering nursing homes, Jon defies all expectations and sets a new bar for what can be achieved in later years of life.
Defying all odds against him, Jon will set-sail in his custom yacht the Perie Banou 2 for an 8-month solo journey around the earth with global sustainability at his heart.
Working with scientists from Curtin University, Jon will test for micro-plastics in the sea and establish a base-line for all future data on ocean pollution- a major global issue affecting life on earth. Jon has been described as "a most humble, self- deprecating person who shuns the lime-light, loves the sea, uncomfortable on the land, and simply wants a deck under his feet and the wind in his face".
This is one of the most important circumnavigations in history and there is no-one more qualified that Jon Sanders to undertake the task.
Simple design

His voyage was the first time anyone had circumnavigated twice alone and, by the finish, he had spent 419 days at sea and sailed 48,510 miles.
That still wasn’t enough.
Jon Sanders wanted to go further, for longer.

He knew that at 34ft Perie Banou wasn’t large enough for the fuel and provisions required, so he bought the 47ft Parry Endeavour and consulted engineers and naval architects to prepare.
‘You have to have a really sound boat,’ he says.
‘We reinforced the boat in case of knockdown. We added stringers and a bit more glass, a different keel and reinforcement in way of the keel. I skimmed out furniture I didn’t need, weight in locker doors and floorboards. Add more strength, add more lightness, add more simplicity. If you can make your boat strong and light, it will go faster and further.’

‘I like simplicity,’ he continues.
‘I never think I’m the smartest guy in the world, and then you go on to boats and think: “That’s complicated.”
There’s lots of running rigging, purchases, winches, blocks and things to whack you on the head. Why not have the rope going straight to the winch?’

In 1986 he left Fremantle again on Parry Endeavour on an even longer voyage, this time attempting to circle the globe three times in succession.

Each time, he shaped a course north of the Equator to round St Peter and St Paul Archipelago off the coast of Brazil, ensuring that his course encompassed both hemispheres.
Close scrapes

His closest scrape of the entire voyage was when he collided with a trawler off the Falkland Islands.

‘I had wind vane steering and the wind changed but it was seriously cold and I was a bit reluctant to get out of bed though I knew there were trawlers around. I hit, bounced off and went on. I bent the bow and broke one of the forestays, which I repaired. Every single stay on the boat was duplicated.
‘I learned to make my bed with normal rugs so you get annoyingly hot and don’t mind sticking your head out and having a look,’ he says. 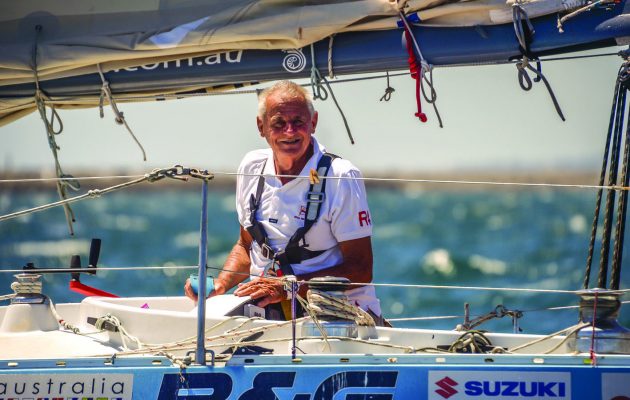 While happy to sail short distances with crew, Sanders prefers to be solo when sailing long-haul. Credit: Royal Perth Yacht Club
So what is it about solo voyaging that keeps him coming back?
‘That’s easy,’ he laughs. ‘It gives me something to do.’

He insists he is not a loner, just indifferent to being alone.
He has never married.
‘I have people who sail with me who I like and I enjoy their company. I’ve had guys start at a very young age now in their 40s who have done thousands and thousands of miles with me. But long-haul that’s difficult.’

Sanders proceeds in a fashion that coastal sailors might consider under canvassed.
On Perie Banou II his favourite sail plan in winds up to around 15 knots is one reef in the main, and the jib flattened with a few furls.
His jib is small by most measures – ‘a small No 3 in the scheme of things,’ he says.
‘Steady progress. No load on the gear.’

On both the first Perie Banou and on Parry Endeavour, survival conditions were tackled with a storm jib or trysail and trailing warps or a drogue.
He is no fan of heaving to.
‘All I can say is, the last thing you’d want is to be blown on sideways to wind, so just a teeny mainsail fully reefed and pointing into the wind and I’ve never [been rolled] past 90°.’

He took a drogue on this latest voyage, but the attachments failed, so he fell back on an old car tyre he had picked up in Mauritius.
‘I just hung a rope out and dragged it in a U tied from the starboard corner of the stern to the port corner of the stern. Then I just let the tyre slide down the rope. It works well.’

This conservative, low-stress style of sailing is one of the reasons he has finished nearly every long voyage he has ever started – that alone must merit him a world record.
He knows better than to seek to battle.
‘Probably most of the rest of the world won’t believe this, but it is not at all difficult for me to safely sail a yacht across the ocean or around the world,’ he remarks.
‘It’s very basic and simple. It is a lot more comfortable being a little more cautious. It’s a better ride and less strain on the hull, rigging and gear. Less strain on me, too.’

He takes it as it comes.
That motto ‘Keep calm and carry on’?
That’s Jon Sanders.
Links :
Posted by geogarage at 1:10 AM