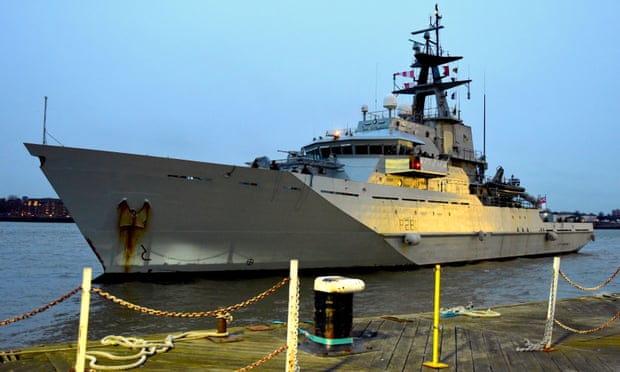 HMS Tyne, one of the navy’s river-class vessels, which could be deployed in the event of a no-deal Brexit. Photograph: Fraser Gray/Rex/Shutterstock
From The Guardian by Dan Sabbagh

Exclusive: two vessels to be deployed at sea with two on standby in case EU fishing boats enter EEZ

Four Royal Navy patrol ships will be ready from 1 January to help the UK protect its fishing waters in the event of a no-deal Brexit, in a deployment evoking memories of the “cod wars” in the 1970s.

The 80-metre-long armed vessels would have the power to halt, inspect and impound all EU fishing boats operating within the UK’s exclusive economic zone (EEZ), which can extend 200 miles from shore.

Naval sources said the deployment had been long planned, but it comes after Conservative ministers quietly doubled the total fleet of patrol ships from four to eight, partly in case of a crisis caused by a no-deal Brexit.
“We have done a lot of work to ensure we are ready for every eventuality,” one insider said.

Although the offshore patrol ships carry machine guns, they would not be expected to use weapons against EU fishing boats.
Instead they would aim to run alongside a vessel believed to be breaking the rules, boarding it for inspection if deemed necessary.

In extreme cases, an EU boat could be impounded and taken to the nearest UK port.
“Nobody is going to be firing warning shots against French fishermen; firearms are only used when there is danger to life,” the navy source said.

During the “cod wars” between British and Icelandic trawlers in the early 1970s, fishing nets were cut and boats on both sides were regularly rammed. In a handful of incidents, shots were fired.

Fishing remains one of the biggest sticking points in the tortuous EU-UK trade negotiations.
The complex economic argument over quotas, timescales and the length of an industry-specific transition period has put Britain at loggerheads with France.

Without a deal, EU boats would be banned from fishing in the UK’s EEZ – although it would also mean that UK fishing boats would be barred from the waters of nearby EU member states.
This week, the EU proposed a one-year extension to the transition period for fishing to allow a deal to be negotiated, highlighting the significance of the crisis.

Speaking at the end of Friday’s European council meeting of EU leaders, Ursula von der Leyen, the European commission president, said: “We understand that the UK aspires to control its waters. The UK must, on the other hand, understand the legitimate expectations of EU fishing fleets built on decades and sometimes centuries of access.”

European and British boats have long fished in each other’s waters; today EU trawlers take around 60% of the catch from the UK area. 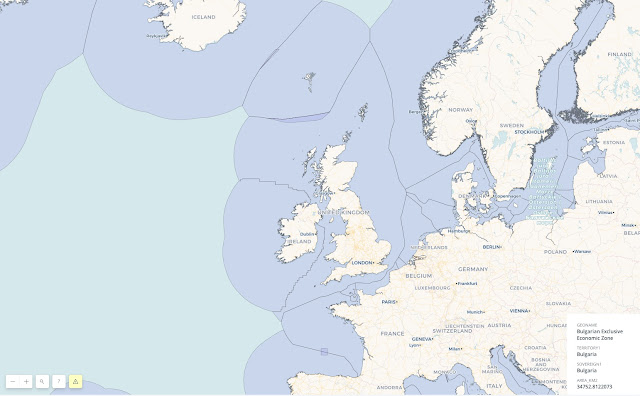 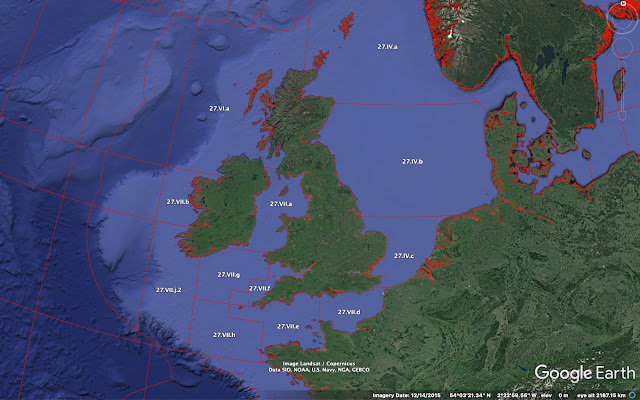 FAO fishing sub-areas around british Isles
with the GeoGarage platform on Google Earth
The International Council for the Exploration of the Sea has subdivided Area 27 into sub-areas and divisions.
These serve as a basis for scientists who make diagnoses on the state of the resource when they meet in working groups under the aegis of ICES.
These sub-areas and divisions are also used for the allocation of fishing quotas.
A large part of the catch is mackerel and herring – not popular in Britain and so exported – while fish that is popular in the UK, such as cod, is usually imported.

It is unclear how effectively the navy can patrol the EEZ in practice – it may use satellite surveillance to help locate EU fishing boats – and how aggressively the UK government will want to act against French and other EU member states’ vessels when relations with the EU are so delicate.

Fishery patrol vessels have long operated in UK waters, but a no-deal Brexitwould have a significant impact on the tasks their crews would be expected to undertake.
Two of the patrol ships, from the navy’s river class, will be at sea at the turn of the year, while two others will be in port ready to deploy at a few hours’ notice, initially in English waters, because fisheries remain a devolved matter, but they are available for all of the UK.
In theory, other warships could be called on if Boris Johnson wanted them to be used.

Chris Parry, a former rear admiral and ex-chair of the Marine Management Organisation, said ministers should act assertively. “I would seek to make an example and take a [EU fishing] boat or two into Harwich or Hastings. Once you had impounded them, the others would not be so keen to transgress without insurance.”

But Tobias Ellwood, chair of the defence select committee, said he was concerned that the navy would be overstretched at a time when Russian submarines were increasingly operating around the UK.
“Our adversaries will be smiling as the biggest European militaries spar against each other over fish.”

A Ministry of Defence spokesperson said: “The MoD has conducted extensive planning and preparation to ensure that defence is ready for a range of scenarios at the end of the transition period.”